Try as I might, I just could not find a pun or a rhyme with 'Chelmsford' for my blog title, so apologies!  I thought about something like 'at the helm' or legendary football commentator John Helm but it didn't quite work out.

Anyway, with Hull City away to Middlesbrough, the OG squad of myself (Simey 'BRAPA' Everitt), Father BRAPA (Dad) and Tom 'Clag Monster' Irvin did what any sane trio would do and made our way to Chelmsford for a rare foray into Essex pub ticking.

Chelmsford was exciting, for it has NINE whole Good Beer Guide entries, meaning I could even be selective about which of the pubs we chose to visit.

The air was bitterly cold for mid April as we exited the station after a surprisingly short train ride from Liverpool Street, and I loved Chelmsford immediately when it looked like the town (city?) logo was a dartboard at first glance even though it obviously wasn't: 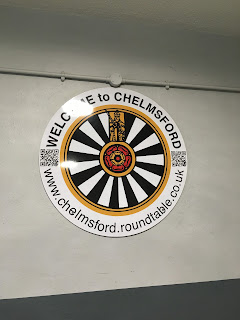 It all reminded Dad of our trip to Limehouse as we skirted around a railway bridge to find what we believed was our first pub, the Railway Tavern, apparently a pub of tardis qualities. It had just gone 10am, the listed opening time everywhere, so we could get off to a cracking start, but this Tardis wasn't so much Dr Who as Dr When (Are You Opening?) as we walked around the back of the pub and found a man rolling beer barrels into a cellar.

"Wotchor Guv!" he probably didn't say in his finest Essex twang (I grew up in Saffron Walden so I know the lingo) as we tried to enter the premises.  "What toime is it?" he asked, and when we told him, he confessed it'd be nearer 11am when they'd actually open.  Gah, not a good start!

There was only one thing for it, a ten minute walk across town to the only other pub open at this time, the Wetherspoons!   And say what you want about the chain, you never see them NOT open when they are supposed to be ....... 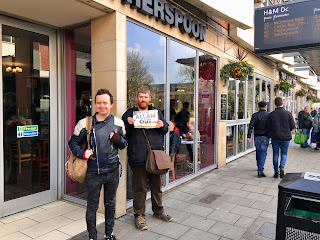 Two reasons I'd been reluctant to include the 'Spoons in our list of 5 Chelmsford pubs today.  Firstly, I'd been to SO many in North London last week, I was all Timmed Out, as we say in the trade.  And secondly, there seems to be a correlation between taking Dad to new 'Spoons on a Saturday morning and a disappointing experience.  I go to some quite nice ones, but rarely with him!  Though I suspect Saturday morning isn't the time to see them at their best if I'm honest.  Here, one of today's two key themes started - memorable barmaids.  This young lady was a funny one, having served me a pint of Oakham Citra, it came to Tom's standard 'blackcurrant cordial with tap water' and in a BRAPA first, she explains in some detail how she'll put the cordial in and he has to go to the water dispenser at the end of the bar and top it up himself.  Fair enough, I thought, but less than 30 seconds later, she asks again what he wants like she's hearing it for the first time! 'But ... but. .... you've just chatted at length about it!'   Goldfish memories aren't great when you work in a 'Spoons.  I should've probably gone for the JW Lees Brian Cox beer, my Citra had a weird fizzy twang.  The pub was quite gaudy, and I know a thing or two about bright colours, just ask my wardrobe!  When have purple and orange ever worked as a colour scheme outside of Double Decker chocolate bars?  Not here!  It was accentuated by a group of breakfasting American ladies who looked like they were on a fun run sponsored by Stabilo.  I hid my green highlighter for the time being.  Some West Ham fans tried to 'give it large' (this ain't Barking mate, and you are away to Man Utd if you hadn't realised), but it was time we left. 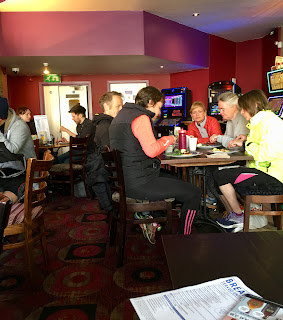 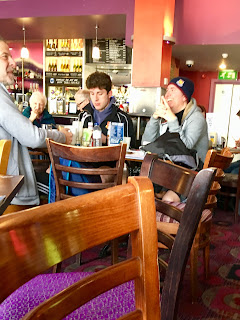 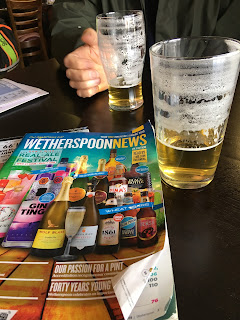 Onwards and upwards, but back where we came from in truth.  Still not quite 11, so we were kind of banking on the Railway Tav being open by now.  The air was bitter, and it was actually trying to snow, in mid April in the South!  Extreme.  No wonder David Attenborough  keeps telling me to worry. 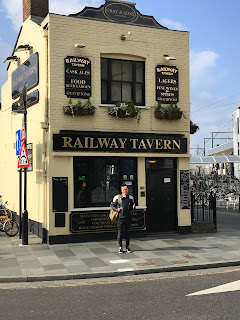 The landlady person greeted us as joyously as you could hope for on entering the pub as a stranger, really impressive, couldn't stop laughing, and as Tom got his blackcurrant cordial and tap water, no ice, I felt it only right to tell her the 'Spoons forgetful barmaid story which she seemed to enjoy, though maybe you had to be there.  Though we sat in the front bar, it was when I went to the loo when I could finally appreciate the pubs true beauty(!)  It went a long way back (hence the Tardis thing) and was bedecked in a kind of vintage railway carriage theme in terms of seating and decor, a truly classic pub no matter where you are in the UK.  I've been told Essex will be a rewarding BRAPA county to do because "people here still use real pubs" (quote Martin Taylor, last week) and places like this make me wanna sack off Cumbria and Durham and do Essex first instead!  So enthralled I was, I went into the ladies loos by mistake and had a sit down wee in a cubicle before I realised my mistake. OOPS!     Before we could get too relaxed in our corner snug, a bunch of red and white shirted drinkers appeared.  After some research, we worked out they were Woking fans, away to Chelmsford today in an exciting top of the table clash.  It was like they'd nicked a copy of the BRAPA agenda I'd scrawled on a scrap of notepaper, for we'd see them in EVERY pub we went in after this! 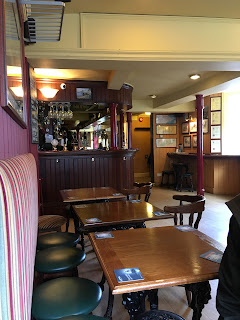 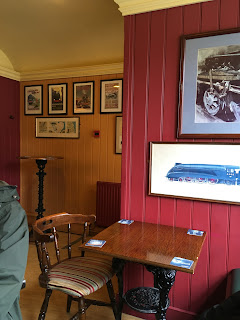 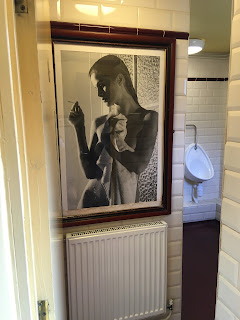 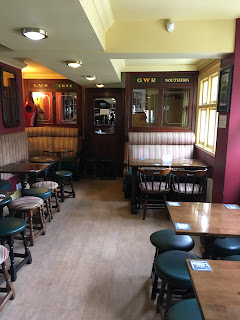 Our longest walk of the day took us to pub three over some green parklands ...... 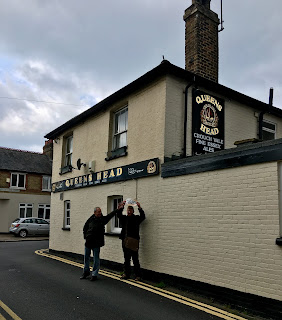 The weakest of today's six pubs by quite a long chalk, a shame cos location and set-up wise, it seemed like it was going to provide something positive.  I confidently predict it'll be a long time before this pub sees the light of day in the GBG after this current year.  It had the 'holy trinity' of crap pubness.  A surly barmaid (Dad reckoned she smiled for a millisecond on arrival, I didn't even witness that!), she was miserable to the point I felt a bit uncomfortable as we waited for the drinks to be served.  It was freezing cold - I know it is hard to heat some of the bigger older pubs but no effort was made here.  Oh, and thirdly, the beer was rank.  Crouch Vale, I've sampled plenty of their ales before without incident, but by the end, this'd only be fit to go on your fish n chips!  Welcome distractions were a nice Robinsons brewery mirror in the Gents (they get everywhere!), Essex County Cricket memorabilia, and our friendly Woking fans who came in, played darts for it, but left quite sharpish.  One hung back to ask what our game was, he didn't seem to fathom we didn't want to be up in Middlesbrough watching Hull City, and joked his mates were so rubbish at finding their way around Chelmsford, they'd need an Uber to get to the Orange Tree from here.  It made no sense at the time, but it would do!  We told him no doubt we'd see him shortly .....


But fear not, join me tomorrow night for Part 2 where our next 3 pubs will be a marked improvement.