So, to recap, we were halfway through our Chelmsford debut but only the Railway Tav had come up to scratch so far of the three we'd done on a cold Saturday morning in April.  But never fear, we were about to turn a corner .......

(* Thanks btw to M.Lawrenson for blog title idea by the way, Chelmsford 1-2-3 was a Sitcom I never got to see cos I'm YOUNG, honest.)

Visiting Woking FC fans were rampaging through the real ale boozers at a similar rate as us, and one had just stopped us to 'joke' his friends needed an Uber to get from the Queen's Head to the Orange Tree.   I didn't get it, but it really was just a few steps up the road .......

Here we go! This was more like it, homely, warm, friendly greeting from colourful haired barmaid and cosy with good ale.  True, I get nervous when pubs push that pretty hackneyed 'every day is a beer festival' claim, meaning they serve tonnes of ales, but I was (I think) on t'Wibblers (of Southminster fame, yes I have had a poo in their Brewery Taproom back in '17) and it was great stuff.  You could tell it was a serious drinkers pub, cos four (three blokes and a younger - somewhere between 30-70 year old lady) who were  'rating' beers from recent days out.  Listening in, it sounded like only she took it seriously and they were just along for the ride!  Typical snapshot of conversation, though allow for slight poetic license:
SHE : 'Remember that rhubarb sour in the Kings Head, we really appreciated its dankness, astringent nature and element of lemongrass in the aftertaste'.
BLOKE 1: 'BURPPPPPP'
BLOKE 2 : 'Beeeeerrrrrrr'
BLOKE 3 : 'Yummmmm'
SHE : Now, let's also recall that Coffee Porter in the Queen's Nose, with the salted caramel kick.  You were all fans of that one at the time.
BLOKE1 : 'I LUV BEER ME'
BLOKE 2 : 'BEER MAKES ME FEEL HAPPY'
BLOKE 3 : 'BEER MAKES ME NEED TO PEE'
Of course, our Woking friends had found another dartboard (possibly pool table too, can't remember!) and were at the back of the pub having an absolute whale of a time for a final time before messing up their promotion dreams so again I said an awkward hello to them cos they were blocking the toilet door, where at least I could appreciate the Pussycat Dolls and old beer signs (a winning combo) but yes, looking back, think this was probably my favourite pub today. 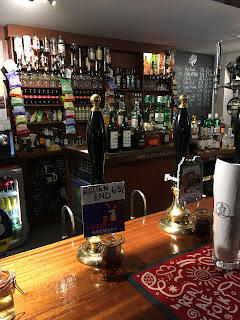 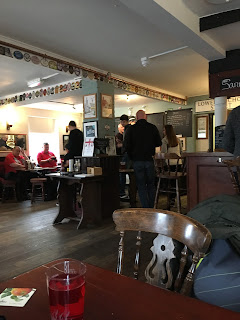 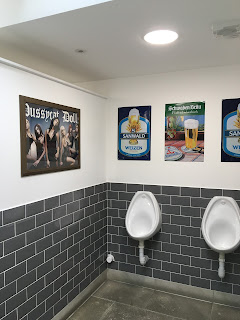 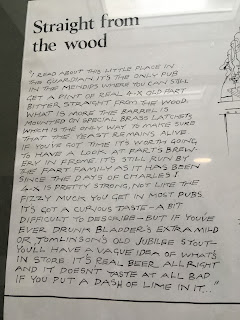 The sun was finally out now as we made our way to pub number FIVE.  It was only 1:30pm, and we were not due off on the train back to York til 7pm.  Uh oh, this could get messy! 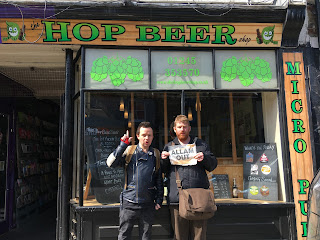 We chose to strategically end our 'Chelmsford ticking' for the day here, Essex's first micropub to be exact, so that when I come back to do the more difficult ones, Endeavour and Oddfellows spring to mind, I do at least also have the Ale House, which is right next to the station to take a bit of pressure off.  BRAPA logic isn't always easy to follow, but there you go!  Controversy from the start as the custodian of the ales (or whatever they call Micropub owners these days) had to relinquish his private supply of blackcurrant cordial for Tom.  As we know, Micropubs rarely have cordials, even if they do have cordial welcomes (sorry, that was shite) and you could see the poor guy was torn, but he was SUCH a top bloke with a real nice demeanour that he was always going to put the customer first, EVEN when that customer is Thomas G. Irvin.  I got mi Billericay something or other and we sat down we a nice sense of well being which only increased when a bloke goes "Simey? BRAPA?"  My cover sprung, this was the lovely Nigel Sommelier off of Twitter too and we sat with him and chatted all things pubby Chelmsford and stuff though as you know if you've read this blog before, fifth pub always a bit of a blurry experience for me!  Still, a nice place to end my first ever visit to Chelmsford, a town I got a good feeling about.  Oh, and a Woking fan made a late cameo of course.  But we still had one other pub elsewhere left in us ....... 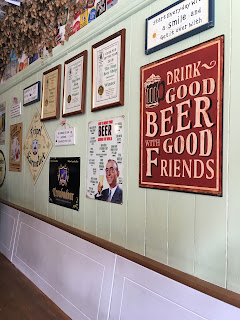 Because Tom is a better BRAPA strategist than even me, he was aware I was getting close to completing East London, and if we changed at this place called Shenfield where nothing ever happens, we could get to Gidea Park, where my plans were foiled here last November.

It'd be a nice monkey to get off my back, and would be a nice break in journey to stop this ridiculous rate of drinking!

I think it was Nigel who told me Gidea Park were also a (not very good) band, so I googled them and saw they seemed to be some sort of short lived Beach Boys tribute band, but no one would do that would they?  WOULD they?

Anyway, I was by now clarity personified as I marched us down that road I remember so well to the pub and almost a beery tear in my eye ...... IT WAS OPEN!

Not sure Dad was clarity personified looking at his photography efforts as we stepped over the threshold .......... 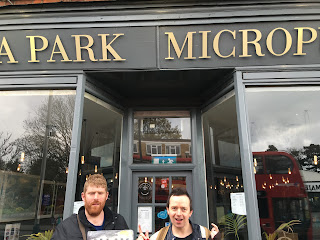 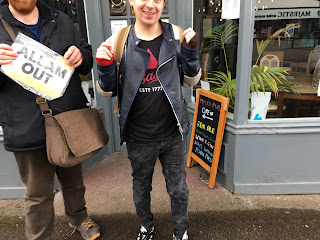 It is a Micropub,  It is in Gidea Park.  They call it the Gidea Park Micropub.  And let's commend them for that because in a day and age where every new cafe bar, brewhouse, kitchen and micro has to have an 'eye-catching' name like the Golden Spunkgobbler or Minge & Mayhem - a trend I unfairly blame on Antic, the lack of pretension here is clear for all to see in the understated quality way they go about things, from the top quality ale, to the warm atmosphere and excellent owner, Trevor.  Amazing a place with huge glass windows with sun beaming in can have a pub-like atmosphere, but 5 pints in, it did!   Back in November, I came here on a Tuesday lunchtime to find the place closed, after a recent change of opening hours.  I could've done more to check (there's this thing called Whatpub you see) but sure enough, when I put it on Twitter, Trevor saw it and promised a free pint when I finally made it.  But because I'm classier than most, I didn't go in ringing a bell saying "hear ye, hear ye, where's mi freebie?", we got served quietly, sat down and wondered who Trevor was.  The guy who served us looked friendly, but he looked too young to be a Trev.  Then the situation was confused further when a bloke said "BRAPA innit guv'nor?" and I said "TREVOR?" and he said 'no', he'd recognised me off Twitter but he pointed out Trevor.  Amazing!  Two consecutive 'being recognised' is a record and I had to come down to Essex and very East London to achieve it, funny am more popular down south.  I guess I'm like David Hasselhoff having to go to Germany to get a number 1 hit.  A top analogy I'm sure you'll agree.  But there was no time to jump in anyone's car, as nice Twitter man introduced me to Trevor and he remembered the incident AND the offer of a free drink.  I think Tom Irvin thought the offer extended to him, but it was like, 'not so fast buddy', so he reached for his moth eaten wallet and paid.  And I ended with an Oakham Citra, the beer I'd begun the day with in Ivory Peg, and you'd barely recognise them as the same drink, a lovely drop worthy of that great brewery.  Twitter bloke smiled and listened from the safety of a further away table (he's obviously read my blogs before), but we were joined by a jolly couple.  No idea what happened once the Citra kicked in, but it was all very pleasant I'm sure!


We must've stayed in here longer than I realised!  Cos from about my second sip of Citra to within about 10 mins of being back at Kings Cross, I heard Dad saying to Tom "it's nearly 7pm, are we actually going to catch the train back to York" and then a mad dash where I hampered us by thinking I'd lost my ticket and Dad helping me out with his.  Oh dear!

We did make the train, and after a nice coffee, I had my wits about me by Stevenage and was able to apologise to Dad and ask exactly what'd happened between about 4pm-6:45pm but no one really knew, I think time just slipped into a vortex on the outskirts of Essex.

And that, was the end of a rather epic day out!  Could it get any more fun over Easter?  Join me tomorrow for 'Punk Rock Briefs from Cradley Heath and Manchester'.   It may be briefer than this (one can but hope), but it'll hopefully be entertaining.