BRAPA - A Wolf or a Tiger? (a Si-dentity Crisis in the West Midlands)

"Hull City away, Hull City away, we'll sing all dayyyyy"  Who writes this shit?  Bob Dylan would be turning in his grave, if he was dead.  Is he dead?  He is isn't he?

Yes, it was time to temporarily step off the BRAPA wagon and back into the harsh realities of lower half Championship football, though it wasn't a total write off as we had three pubs lined up for pre-match, and perhaps a cheeky one post-match?

We (me, Tom and Father BRAP) arrived at the gloomy death-hole that is New Street station (recent multi million refurb but still utter garbage) shortly after 10am and made our way to the much more lovely Moor Street station, from where we took the now familiar Stourbridge train as far as Rowley Regis.

Talking of Regis, the train was as late as the good Cyrille, but I shouldn't 'sneer' (geddit?), at least that allowed us to get sorted with cash and tickets and what-not.

Incidentally, I'm not saying the BRAPA celeb death curse has struck again but Stan Lee dies just two weeks after my trip to the Excelsior in Liverpool.  Interesting.

As we wandered into Blackheath, it suddenly felt as West Midlandsy as it gets, everyone had two pupils in one eyeball and it was peak WBA territory as I noticed people starting to glare at my black & amber sleeves.  They thought I was a Wolves fan.  Luckily, WBA folk are the loveliest of the Midlands fans and most let me cross the road without so much as trying to kill me.

Our first pub was, as so many first pubs are, a Wetherspoons but I was a bit nervous because the GBG App indicated an 8PM opener.  Surely a misprint? 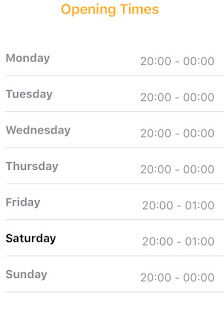 "Imagine if Wetherspoons had a day where none of them opened til 8pm!" Dad reflected as he wistfully imagined becoming involved in the great 'Spoons Riots of 2018.   Meanwhile, I was wondering what an alternate 'Spoons universe would look like in this new 8pm opening landscape.  Beer at £4 a pint, no lager, no coffee refills, Tim declaring "better in than out, just like my belly button", a ban on people over 60, shopmobility scooters outside are clamped.  I could go on.  But I won't.

"It looks like an actual pub!" declared Tom, but I was just delighted the door was open and the 8pm time had been an error.   But I do wish 'Spoons would stop being parodies of themselves.  Two people serving, one had only just come on, but about 15 impatient people all stood around.  I had my vouchers so my round (I'm generous like that!) and as Dad & Tom found a seat, I gently sang "I'll never get served, I'll never get served" when a barmaid suddenly did just that.  Had she heard me?  Seen my vouchers?  Course not, I'd still be waiting now.  I think I was just lucky, though as I glanced to my left, most of the people at the bar were old men who'd been for coffee refills but were now blocking the bar.  Perhaps the most unacceptable bar blockers of 2018!  One bloke had no drink at all, but was stood there sideways with his head on a weird angle doing nothing.  And the vast majority of the pub was a sea of breakfast chaos, crumbs, sticky tables, wheelchairs and pushchairs.  It was life-affirming.  But equally soul-destroying.  A fine line.    Then, our old Hull City mate and NE Lincs finest fracking exponent Ben arrived on the scene.  Always lovely to see him, and he joined us for a warming Titanic Cherry Dark.  Dad discovered he had a new expression, 'Resting Bitch Face', and after a few more scowls at my amber sleeves on the way to the bogs, it was time to move on to our 11 o'clocker. 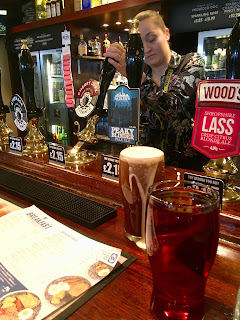 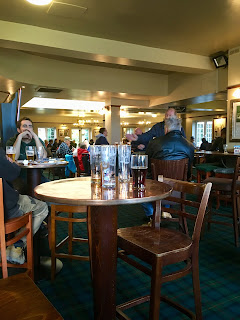 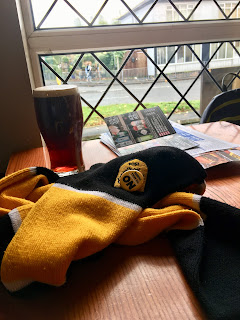 After a short walk took us from Blackheath into what was sort of technically Halesowen, a place I've always wanted to go to cos as a twild, I thought it was called Hallowe'en, Tom turned us down into an industrial estate, unit 9 to be exact!

It didn't look very open, these places never do, but a lady encouraged us to try the door handle (good plan!) and some blokes who looked like beer visitors were milling around getting in the way......

"Uh oh, I'm not going to enjoy this" said Dad, already skulking around like a captive tiger.  On the other hand, as Dad went to the bar with Tom, Ben had a great big beaming smile on his face .... "oh this is my kinda place!" he exclaimed.  "Hmmm" I said, for me & Dad were thinking of a recent Brummie outing were we'd failed to enjoy Burning Soul Brewery Tap, a similar style set up on first glance.  But good to have someone like Ben with us to offer the alternative perspective.  In an age when no one likes or expects to be challenged by anything contrary to their views, this was healthy.  However, it didn't matter as I'm delighted to report Dad was soon wearing a look of hope.  "Very good staff who give a damn, a few handpumps, great ale, I'm impressed!" he said, showing you should never judge a book by its shit stained cover.  Behind us, complimentary (unless you are BRAPA) bread & cheese was being arranged on boards.   But what was that skull-splitting sound behind me?  Someone was chopping a breadstick with an electric carving knife!  I tried saying this was wrong but I was shouted down by all three "tis the most effective way of doing it Si!"  so there you go, I'd been told.  Ben did us a quiz on Hull City in the FA Cup which was fun but obviously didn't take long!  "We might come back on the way to the station!" asked Ben hopefully, and I agreed we might.  I knew he was thinking of his bladder, and that is never a bad thing.  I often think of Ben's bladder. 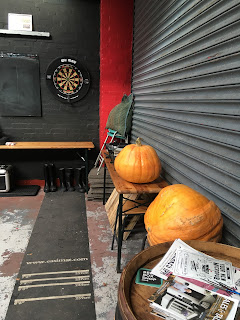 One more pub then as me and Ben sprinted ahead, and he wasn't sure he liked the look of this, but to me it was screaming 'proper pub I enjoy coming to the Midlands for!'

The ceiling was a sea of green plastic poppy weirdness / remembrance genius, and the sun shone annoyingly on the board so you couldn't read the beers and that folks is why if you insist on having a board, "make it a blackboard or nothing at all".  I think that was a Scandinavian hit in the 80's.  Two old blokes tried to get their bored dog (not a twog, I liked it) to do something interesting, but it failed miserably.  May as well have been a cat.  We oozed into some bench seating and it was my turn to do a Hull City quiz.  The answers included '5 foot 8', 'no one knows, but Bolsover', 'he borrowed a different hire car every day of the week' and 'Hepatitis A'.  How did you do?   Not much else to report really, it was good, I've not written much by my standards, deal with it. 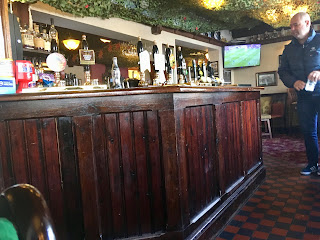 So it was back to the Fixed Wheel at Ben's behest, not that we were complaining.  But there were two little epilogues to my blog of gladness, as I marched down the street with my royal Dadness.  You may find them amusing ......

I picked up a local CAMRA mag and noticed an interview with a pub notable in BRAPA circles I visited recently.  This was the Swan in Amblecote.  Notable because it was the LAST pub I visited to get in the 2018 GBG but NOT the new 2019 edition.  I liked it personally and would've kept it in.

Now I'm NOT saying TWAMRA don't have a sense of humour but that is probably what you are thinking.  Okay, I am too.  Same bracket as Tax Inspectors, Microbrewers, Local Councillors, Beer Bloggers, Benefit Cheats, Vegans and Farmers in inability to laugh at themselves.  But we can't generalise.  Some are probably a great laugh.  Anyway, so when the old school landlord was asked what his favourite beer was and he came up with the reply of Carling Black Label, well you do wonder if they took it to heart! 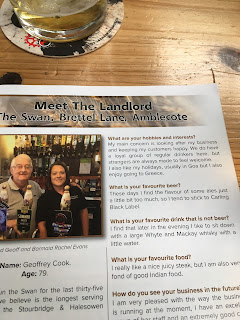 In my eyes, brilliant.  I find the flavour of some of the modern ales a bit too much as well.   Or did he then take off his mask chuckling to reveal a Cooking Lager?

But the Fixed Wheel wasn't quite done with me yet as we stood at the bar, my round, and Ben made a weird whistling noise through his teeth and said "ya know Si, I MIGHT try one of the taps!"  Dun dun dun!    Okay then, and he points to one with an ice cream symbol.  Well, of course fate decreed it was a Burning Soul beer, and when I said something like "ice cream beer, I can't imagine such a thing!" a helpful bloke to my left sat at the bar offered me a sip of his. He seemed to know a lot about it.  When I looked closer, the bloke had a Burning Soul hoodie on!  Gosh, wouldn't it be serendipitous if he was the same guy who got a bit cross with my review of his 'pub' a few weeks back?  In all the mayhem, despite having ordered a pint of cask something or other along with Dad, the barmaid gave me an Ice Cream Burning Soul beer too!  Fate loves laughing at BRAPA.  I couldn't quite manage it all, but the upside of it all was less liquid consumed equalled me not needing the loo throughout the whole of Birmingham City 3-3 Hull City (unprecedented), and good cos it was a modern day classic.  A shit classic, but still a classic.

We were 2-0 down at half time due to defensive incompetence.  Then we went 3-2 up!  Then they equalised near the end.  And yet our fans still had the temerity to chant "2-0 up and u fucked it up!"  Errrrm, doesn't work lads! 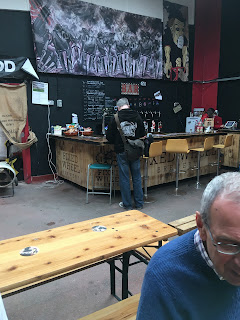 Post match and the plan was to get ourselves to Cradley (pronounced Craydley like Cradle) Heath for a late tick but I soon beckoned Tom away from his one man post match demonstration to point out we didn't have time: 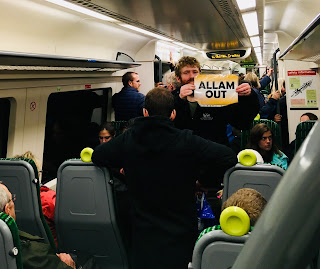 So we hopped back to Brum, and had a swift one in weirdo Victorian quirk masterpiece the Victoria near that theatre.  Lovely barmaid, friendly folk, good ale,  despite the pretty chaotic evening scene.

See you on Sunday for news of that.

Thanks for reading as always, Si
Posted by Si 'BRAPA' Everitt at 10:58 pm