Saturday 17th November, two pubs in, three to go, and it had already been an eventful day in Holderness.  We'd had everything from an inland lighthouse to erosion ready boulders.

Dad was my chauffeur for the day, but despite so far being on the hot chocolate and cappuccino, he was enjoying it as much as me (in my mind at least!)  As we headed north west from Withernsea, the excitement grew as we passed all the places he used to bike around as a twild.  Coniston, Sproatley, Roos, Burton Pidsea, he knew 'em all.  But one place he'd never heard of, slap bang in the middle of all this, was 'Lelley'.

I use inverted commas because it probably isn't real.  An EY TWAMRA invention to lure in the gullible masses from the rest of Yorkshire?   We drove to Preston by mistake, no not THAT Preston, but home of one of the GBG's most woeful entries in my 4.5 years of ticking, the Nag's Head.  A pub so bad, the rude landlady actively seemed to be trying to freeze pensioners to death.  I've always found Hull and EY CAMRA's decision making quite baffling of all the places I know, but this was the ultimate in baffledom.

We turned the car around. and the purported village of Lelley was very pretty, but no consolation as not a pub in sight.  It was up on the 'main road'.  Again, inverted commas, for it was far from 'main'.
Only about 2 cars were parked up.  "Is it open?" asked Dad, third time out of three one of us had asked that today, but it was ...... 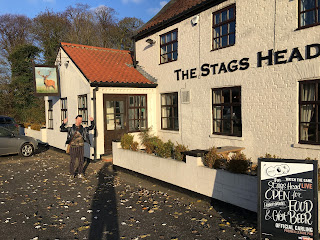 Surprisingly large and barn-like, it was also full of punters.  Had they all walked here?  Hard to believe, most were about 80 years plus, and not a shopmobility scooter in sight.  First glance and it looked disturbingly 'foody', but plenty of space to the left for the drinkers, even if the emergency beermats had to come out, which I don't say often in East Yorkshire.  The ale was the weakest of the day, not strength, I mean quality, not poor by any means but a bit fizzy with a hint of wishy-washyness.  Me and Dad had 'business' to attend to anyway (an update on what we are thinking about which Hull City games to attend between now and May!) and this seemed the appropriate, fairly bland pub to discuss such plans.  After all, a trip to the loo had unearthed some dodgy wallpaper, irritating blackboards, bar blockers and 'piles of logs serving no purpose' (a BRAPA fave pet hate).  Besides, 2366 GBG pubs into my lifetime, it is tempting to be complacent and say "I've seen it all" so when, just at the moment we unfurled our Hull City papers, a lady stood up at a microphone in the main bar and started belting out 'Build Me Up Buttercup' to the non-plussed old codgers at the bar, I have to say I was quite open mouthed.  I say 'belted' out, it was a tentative start, but she grew in confidence, and 'Stand by Me', 'Mamma Mia' and 'Perfect' were delivered with more gusto and proof she could hold a note.  If this was the Voice, I'd have spun my chair around, but only to take a quick sly photo for the blog, and then spin it back around again.  Saturday afternoon karaoke works in say, Churchill's in Blackpool, mid punk festival, but in a pub like this in a place like this, it felt slightly incongruous.   As if she knew of our Hull City research, her next two tunes made sense.  "Oh Ian Ashbee, he's neither here nor there" was fine, but then "cheer up Terry D, oh what can it mean, to a shit football manager, and so is Jeff Leeeeeeee" was a step too far, and we left, muttering goodbye as we had to do that awkward karaoke 'walk past' (well Dad did, I vaulted out through the toilet window into the back garden!  Sort of).

Well, back down to something resembling civilisation for pub four, and we were back on the new Micro trail on Thorngumbald. Of course, I approached with caution, and as so often is the case, I was pleasantly surprised ......

Seems to be a growing trend, and a welcome one to a traditionalist like me, that micropubs are gradually realising that they don't have to follow the original Hillier blueprint to the letter (small chilly one room with whitewashed walls, no music, experimental brews, amusing signs saying things like "stop looking at your mobile phone and converse with our local weirdos" etc) and can still buy a cheap plot in a disused chippy, butchers, brothel, undertakers etc. and do exactly what they like with it.  And this even includes, shock horror, 'being like a mini version of an actual pub' with carpets, jukeboxes, fruit machines, piped music, radiators you'd get piles from and beers you've heard of for centuries.  And this little corker was about as traditional as a micropub can get, apart from perhaps the bizarrely wonderful Oddfellows in Shipley.  Brakespear was the beer I just had to have, and as for Dad's Ossett, well as you beer experts/bores would say "phwoar, look at the lacings on that".  And only three on, low for a micropub.  And on a totally related note ..... best quality ale of the day, of the month, and up there with best I've had all year.  Okay, so the barman and his impressive facial hair seemed a bit of a surly bugger, but perhaps he was playing a part.  Refreshing change from these micro sycophants you tend to get, all mouth, no pants.   Those folk at the bar in my bottom photo were saying some right stuff, but I didn't write it down cos I was 'relaxed' so I forgot! 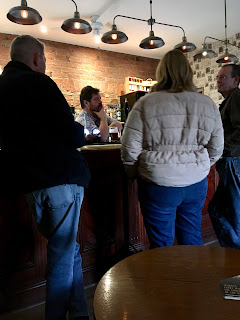 So, one more to go and Hedon isn't far from Thorngumbald.  You could probably walk, glad I didn't have to, my knee I refuse to talk about was smarting today after that Fitzwilliam walk the night before.  It was another micro, another I'd avoided last year in case it was a flash in the pan, but a second entry and of course I was now taking it seriously.  Such a pub whore!

We parked in this car park thinking "it can't be far away" and there I spied it backing onto the same car park:

Special award must go to most hackneyed pub name of the month, I can almost see the Antic's of South and East London nodding in agreement, but still thinking it needs an extra word tagging on the end like 'goathouse', 'technical' or 'marvel'.  Okay, so this may have had more of the traditional micropub feel, but the warmth of people and temperature (and bench seating) was not to be underestimated for this was a fine effort too to complete a strong days pubbing.  The landlady was fantastic too, but as she pulled our Chocolate Orange Black Sheep, it went.  And then she did a "here's what you could've won" and gave us a taste anyway.  Cruel.  But not for long, as Titanic Plum Porter was on, oh yes, can't go wrong and Dad says it makes up 60% of Titanic's overall sales or something crazy.  Not bad for a speciality beer.  A bloke stood at the bar (photo below) had a real presence about him, and sure enough, I've been informed he's a local CAMRA legend and has stood at this same spot at the bar since 1968.  He must've been rubbing off on us (not literally) for we picked up a local TWAMRA mag and read about Hull pubs to get future ideas for home games.  Vintage on Silver Street, Station Inn, Beverley Road, let's get those pre-emptives done.  But for now, it was back home to York for a nice/nasty KFC supper! 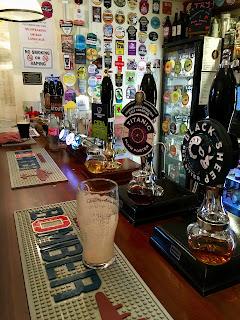 So, only 5 pubs left to do in East Yorkshire for this year's GBG and three of them I actually might have done!  Well, I've definitely been to Hull's Head of Steam back when it was King's Ale House so i COULD tick this off now.  Dad is sure I've been to the Fergie Fawcett in Walkington with him and some bloke I've never heard of.  And I drank Guinness Bitter in two Bridlington old town pubs circa 2000, could one of them be the Board Inn?  And that'd only leave one in Hornsea and one in Beverley.  So can surely get these done before late August or whenever the 2020 GBG is out!