'Twas that bi-annual time of year again, where I take a few work friends on a pub-ticking adventure in the name of BRAPA.  Read on as I (despite being a non member) try to observe the BGBW Code of Conduct in hope of winning that elusive award in 2019.  That's a joke of course, there is a perfectly good BRAPA Code of Conduct out there in the ether somewhere I will update later.

Ever present Jason 'Mr Angry' Garrett and Piper Corday who's only ever missed the first trip were both back for more punishment, whilst we had a welcome return for Rich Ellis, who'd missed the last two trips to Walthamstow and Liverpool.  Simon 'laughing Sy' Clark was unable to join us due to wife and twild commitments, and Daddy Piper (Mick) and Mrs Mick (Shirls) were also absent, going on holiday the next day.

I'd been instructed back in the summer to keep this one more local to entice Rich back out, so was glad when the 2019 GBG threw up plenty of new entries in Bradford and Halifax.  Okay, so they'd have been good easy ones for a Friday night but you can't be entirely selfish can you?

Remember my recovering knee that I don't like to talk about?  Well, I'd passed it on to Piper and she was hobbling around like an old woman all day having had injections in it only a day before but had come off the meds for a day so she could drink a pint in every pub, top BRAPA commitment.

As always, it was train strike Saturday on Northern Rail but there were just enough available to stop today being difficult, but I am getting bloody sick of the fact its easier for me to pub tick in Chelmsford than Bolton at present.  Still, I'm not gonna moan, there's always someone out there who has it worse than you as this text from a friend bore out: 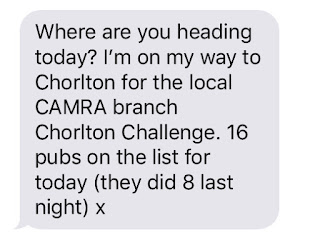 Always good to start at the furthest point and work your way back towards the station, so a slow uphill 15 minute walk took us to pub one, which has been gaining quite a reputation.

Jason hates being in photos, so insists on taking them, but always claims "it hasn't done anything!" and then when I check, he's taken loads.  No word of a lie, on this occasions, 54.  Here is an action shot of our exasperated gang, and me walking towards him saying "FFS Jason, have you taken it or what?" (but something more polite in case he lamps me one). 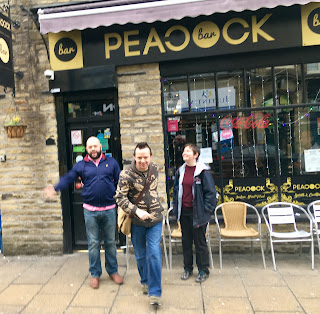 All the while, our Indian host was watching this scene nervously through the window, and didn't seem to know what to expect when we entered.  "You ARE open" I asked/said (with a hint of Derron Brown about me).  "I think so" he said, looking at his watch with some confusion.  This was the first Indian themed pub I'd ever been to,  some crazy decor as a Yorkshire White Rose flag was draped next to a Kingfisher lager one, a rocking swing which we rocked in (apart from Jason, not his style) and a staff member turned up to take a photo of us!  We got 4 pints of Farmers Blonde from the top bar, a great beer when kept well, and it was absolutely first class here, didn't get a better quality pint all day.  The handpumps had black n amber cosies on them, surely a sign of a forthcoming Hull City victory, I thought, but I'd be wrong as usual!   An army of staff were cooking Indian food out the back even at this time, and the owner came over to chat and was surprised to hear his pub was in the Good Beer Guide, as he'd been recommending other nearby pubs.  He even whisked my book off me, and took it to show the others.  Was so glad to be reunited with it, having it out of my sight for even that one minute was like losing your twild, I guess!


So, a great start but I had my misgivings about our second pub as we entered a weird underground complex of weird bars, shops, cafes and the like called Sunbridge Wells.  I'd read LadySinksTheBooze recent Bradford pub blog, and she'd hated this next one with passion.  She said there's a reason things are kept underground, like corpses and this place.  Brilliant!

Going down steps was the worse thing for Piper's knee, and we had plenty of them.  Thought we'd found Bradford Park Avenue's new ground, but it was actually a giant pizza oven and some smug looking middle agers looking entitled.

Just when you think you've reached the final turning in this weird knowing Labyrinth, a sign for Wallers appeared.  I took a deep breath, set my jaw square, and walked on in ......

Odds on me enjoying this seemed a million to one, but as always, BRAPA like to confound me.  The owner set the tone by welcoming us heartily, telling us exactly how many miles the beers had travelled from to get here (I pretended to be wowed) and told me Wallers used to be a brewery here in the 1830's and his current project is to find an old brewery recipe so he can recreate some of their stouts of old.  And then warned us about skeletons and weird stuff like we were at Forbidden Corner in North Yorkshire (a great day out if you've never been!)  We sat down in the peculiar purpleness, and Jason said it reminded him a bit of Lendal Cellars in York - well yes, the late 90's  version before Jamie Oliver and Greene King conspired to fuck it up.  It also reminded my of that 'Great Ale at the Vaults' place in Bolton, but with better ale and staff.  Still, it was warm, and I've now decided I'm of the age where pub temperature is pretty much the most important aspect of my pub life! Pint of Stones in cosy warmth or gorgeous real ale sat in a freezer?  I tell ya, it's a tricky call.  So all in all, yeh, not perhaps in the spirit of why I'd come boozing in Bradford (Corn Dolly, Fighting Cocks etc) but I left feeling impressed, and not 'disgusted of Sunbridge Wells' hahahaha.  Sorry.


We left through a different exit, which seemed to be the official 'gateway' to the place.  Then for one of the weirder moments of the day.  I noticed the Sunbridge Wells tagline was "welcome to the world of pure imagination" and I said "ugggh, it's no Willy Wonka's Chocolate Factory is it?" and shaped up to take this photo ...... 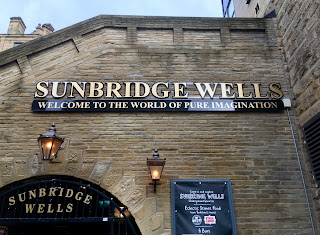 But before the others cold reply, a random woman behind me boomed "Ha!  Got his camera out again, surprise surprise!"  She wasn't even Cilla Black.  But she said it in such a sarcastic way, it sounded like she follows BRAPA around randomly commenting on my progress!  What's next, am I going to see her in a Maidenhead micropub hurdling a dog only for her to say "Ha!  Will be interesting to see how he handles this twog incident...."

I was too open-mouthed to reply, Rich said I should've pretended I was a foreign tourist.  I'd have to be French, I've been mistaken for a Frenchman three times in my life.  Anyway, 'zut alors' and all that, I was bristling and needed pub three to recover.

Now you know when a pub looks like a Wetherspoons but actually isn't, one of the saddest things on earth ...... 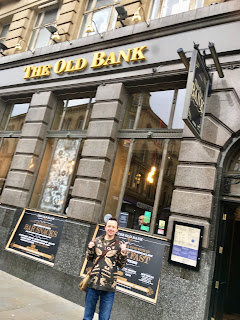 Actually it could've been a 'Spoons, but in any case, it was just around the corner from the Ginger Goose, the scariest BRAPA tick in Bradford I've ever done over the years where a bloke told me about chatting to the spirit of his dead boyfriend, before supporting an anti-Muslim rally and talking about some biker gang he was in or something.  This was tame by comparison as Piper stepped forward to buy us some Firecrackers (beers, though nothing would surprise me around here).  I climbed the steps to the bogs and thought I'd found a secret hidden room behind a door (as rooms so often are) but there were steps up from the bar, so poor Piper and her knee I don't like to talk about, another climb.  We slumped in these low settees and being banking geeks, we did exactly what I'd done in the Counting House in Glasgow and admired how ornate banks of old used to be but when I suggested they may have added a level later on, Jason seemed ready to punch me.  Former bank layout and design is a topic that shouldn't provoke such passion!  Toilets were superb too, old tiling etc.  Otherwise, it was just a very steady place to have a drink, I won't be recalling it on my death bed, but for now, the others decided that rather than wait for the train to Halifax, we should get a taxi.  Controversial, but 4 of us so I went with it.


So three more pubs to do, landmark on the horizon, and I'll tell you all about that on Wednesday because I'm in Hull tomorrow for the Norwich game.  What can possibly go wrong?