BRAPA - New Brighton, West Kirkby and a Liverpool Bonus (The Only Way is Sup - Part 2)

Since my last blog, it has been pointed out that it wasn't Yazz who wrote 'The Only Way is Up', but in fact two blokes called George Jackson & Johnny Henderson who sound more like they are about to open a microbrewery in Wallsend.  There really is no god.

Anyway, where were we?  Ah yes, that is right, Liscard.  Halfway through our pub ticking day on Saturday 20th October and the three pubs so far had all been fabber than the fab four (though if you have similar music tastes to me, that isn't saying much!)

Before you could say Flock of Seagulls, we were heading back into New Brighton for our fourth pub of the day.  This wasn't helped by Liscard having the most confusing town one way system meaning we had no idea where the bus route was.

We'd tried to get inside this pub at 11am, but false opening time claims had been as issue.  Hang on, what if it is in fact housed in this haunted shed?

It felt every inch the refurbished hotel bar it was - big, light and airy, and today's theme of having a great ale served in incorrect glassware continued as I had a Hawkshead in a brand spanking new Doom Bar glass, to go with the earlier 'Bass in faded Doom Bar glass' and 'Holt's Bitter in a Bass glass'.  I've always thought beer doesn't seem as nice out of the wrong glass, but this was my fourth quality stunner in a row.  Anyway, what is this, another boring beer blog?  I hear you ask, no it is in fact a boring pub blog, so I'll crack on.  I sat slumped in a low leather settee with the sun shining into my eyes and Dad and Tom opposite, high up, like they were two evil silhouettes interviewing me for some job I didn't want.  But loud foreign noise and an influx of red shirted wastrels told me one thing, everyone was here to watch Liverpool on some dodgy Euro channel, Red Hot Scouse or something.  Now I've never been a Cardiff City fan, but a bit like Huddersfield in the Yard of Ale last week, I had an overwhelming sudden love of those Welsh scallies.   And with the news coming through Hull City were winning at Notlob, I collapsed into my settee in shock.  Bubble was burst when Salah scored after 10 mins and some dickhead squeaked, fists clenched and jumped in front of the screen and pretended to kiss it.  Dad's expression said it all, 'Ugh, let's get outta here dude'.

Next, we took a train out to our furthest point at West Kirby.  Problem was, it was the end of the line, I needed to pee really desperately, and Tom didn't let me go on the platform cos of probably fake CCTV so I was dying when we got there ......

Lots to commend this place, not least because that wee was the most relieved I've felt in a 2019 GBG pub since that Spanish bloke in Palmers Green Wetherspoons finally got a lager his wife was happy with and stopped complaining and sat down.  What's more, a FIFTH well above average quality ale, friendly atmosphere (apart from woman I suspected of supporting Hull City who glared), the first real warming fire of the Autumn/Winter season, and it wasn't even a micropub, more a 'bar', whatever one of them is in real terms!  To quote Dad, "totally acceptable in every way".  You won't get a better endorsement than that.  Okay, so it had a tiny overly well-heeled lah-di-dahness hanging in the air, and it was voted 4th best dog pub in the north west, but it wasn't too heavy on the mutt quota on our visit, so we can ignore that.  And then, the news Hull City had won.  So this pub joins the elite small number of pubs that Hull City have won in!    As Tom tried to get to grips with the craft scene in one object (top photo), it was time for us to head back to the other side of Mersey. 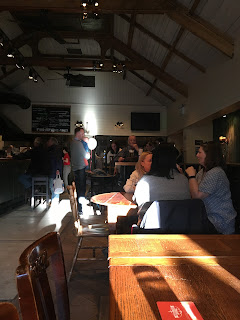 Back in the 'Pool, we jumped out at James St which wasn't far from one of the remaining four pubs I needed in the city.  It loomed large in the distance, so Tom took a long distance shot, and when I zoomed in, we had photobombers aplenty: 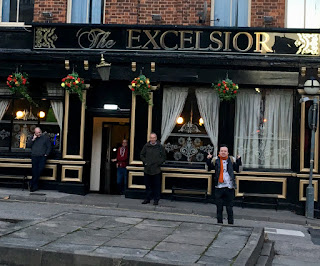 One of those crazy, noisy Saturday evening atmospheres greeted us, probably not helped by the fact Liverpool had stuffed Cardiff in the end, but I did wonder if it was a Everton pub cos it was full of people shouting loudly for no apparent reason.  "Nil Twatis, Niasse Optimism" or whatever the latin is for "I'm hoping this Everton pub will perform".  Despite the loud, slightly sprawling nature of it, it was a good solid old pub, which I admired as I found us a seat whilst I sent Dad & Tom to the bar (not that I'm lazy) with benches, screens and a couple of distinct rooms.  Amdist the chaos, Dad, through no fault of his own, ordered the first ale he could see and when I tried it, ugh, well it made me appreciate just how superb my 5 Wirral pints had been.  Too busy to take this one back, I may have done in a quieter pub.  It wasn't tired as such, but it had picked up teddy, started crying and shouted for Mummy to give it a breastfeeding.  But on the whole, in other circs (first of the day on a Tuesday lunchtime?) I could see it being a good boozer. 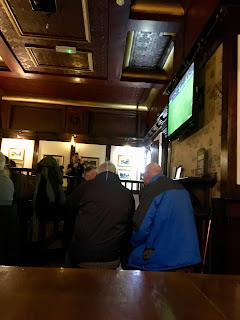 So all things considered, a wonderful day.  Attentions could now turn to November, and the following Saturday, I'd be back in Cambs.  See you tomorrow for my write-up on that one.

For now, have a good week!