Friday morning then, my final day in Dorset and I must say, along with Isle of Man back in Feb, my new favourite BRAPA county in the UK.  Thursday hadn't been quite so enjoyable as the Tue and Wed, but Friday would prove to be the perfect send off.

After the moody Premier Inn breakfast crew got rid of me as quickly as they could, I had to hover in Costa as it was spitting with squally rain and I had 40 minutes til my bus.  I'd gone west (twice), south and I didn't allow myself to go east cos of that imaginary line I'd drawn (STOP ASKING ME WHY I'VE NOT DONE POOLE!), so it was north today...... the map was taking shape nicely.


One shocking stat I'd noticed, I had now done SEVENTY consecutive pubs in the south of the UK.  I was almost a bit homesick, after all, Dorchester Costa doesn't offer the same kind of 'pubbiness' you get in the Leeds equivalent (and I'm not even starring it out today!):

The bus journey was long and meandering, but we got to the village of Longburton with me as the only passenger for the entire journey, just before 12 noon.  The rain was bitching it down by now so I hovered in the bus shelter which had a nice vision of how Longburton might look if it was sunny or you were fucked on acid: 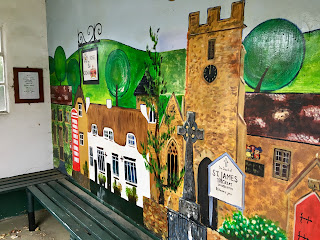 12:03pm and the pub doors finally sprang open, so I afforded myself I little ironic cheer due to the 3 minute tardiness:

Not sure if it was because he had an element of a sturdy Nigel Adkins, but me and the barman never quite 'clicked', always a shame when you are the only customer!  Apart from the brief exchange as I ordered my PG Steam (he was having a cup of tea so was trying to keep him company), the only noises I got out of him was slurping and lip smacking.  And not even as erotic as it sounds.  Perhaps he thought I was a mute, very much the Lina Romay of North Dorset, but better shaved.  I suppose my Taylor-esque 'pub explore' and photo session may have unnerved him, though amongst all the kitsch-gastro-femme wet-wipe lameness, I unbolted a door to a rather wonderful old skittle alley and went inside.  He could've locked me in, so there was that I suppose.  A nice building all the same, I lost my nerve re skittles and returned to my seat next to the bar, listened to local radio, more tea slurping and eventually shuffled out mouthing a nervous goodbye. 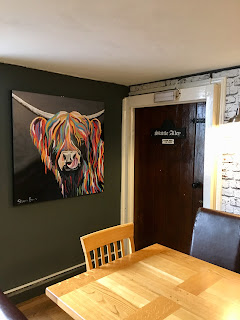 The bus next took me to Cerne Abbas, home of a chalk man on a hill with a big dick.  Best place to view it from, I read, was the official viewing point (which made sense) just north of town, but with the rain and my knee I don't like to talk about, I said to myself I'll only get off the bus there if someone else presses for that stop!   Well someone did.  But no-one apart from me got off.

Fate?  A message from the Pagan gods / 17th century tricksters?  I stood at the viewing point, could only really make out his bottom half.  That's what they all say.

Down in the town, luckily the pub was rather more splendid,  even if it was a 'Royal Oak', the most unpredictable and dangerous of all pub names in my experience. 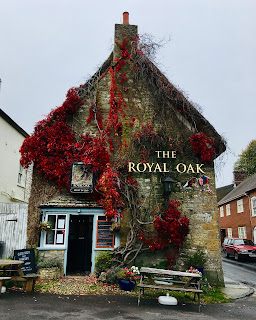 A jovial Irish barman greeted me, and had a bit of a crisis of conscience as I had a Timothy Taylor Landlord polo shirt on, and this was one of two beers on, along with some local muck with a picture of the Cerne Giant on the clip.  I got the local one, and quite nice it was too.  The pub was a cosy wonky warped series of old beams, certainly felt old, and when our new Irish friend saw me tapping away on my phone, he pulled that bit of plastic off the back of his router to give me the Wi-Fi password.  Nice attention to detail.  However, he liked a good sing song, and who should be playing but the Stylistics.  Urrrggh.  Don't tell my Uncle Rod, he loves 'em.  And no 'rod' jokes please.  So as the landlord crooned "Let's Get it all Together" (isn't it 'Put', not that I know, I'm a harsh punk).  And you have to go back to a pub in Freemantle (that terrifying place near Southampton) for my last Stylistics pub tune.  As I basked in historic 1540 pub bliss, on a totally unrelated note, I remembered I'd nicked a banana from Premier Inn breakfast to keep me sustained for the day.  It hadn't stood the test of time, but I ate it anyway.  My first pub banana.  Shut up! 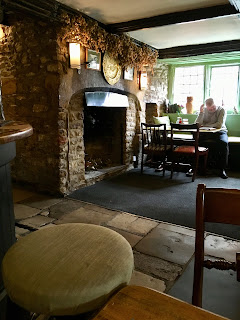 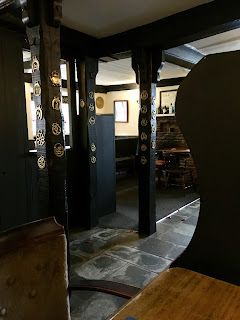 Time to think a bit 'outside the box', as they used to say, there was a pub that looked very close to Dorchester on the map but had absolutely zero public transport links.  So I hopped off the bus somewhere near Charminster, walked through this no man's land called Wrackleford, and onto Stratton.  Sadly, I pulled something in my knee (that I don't like to talk about) jumping into a field to have a pee!

I just prayed the pub didn't close 3pm like it does on all other midweek days apart from Friday, and that the A37 was pedestrian friendly.  It was good news on both counts, and soon a quite foody looking pub loomed out of the gloom like a Brunning & Price that time forgot .....

Well, what a beautiful old stone and flint building, I thought as I walked in, wondering if Harold came in here for a pint after that arrow in the eye incident down in Hastings?  But then I read the pub was built in 2001!  Fooled me.  The staff were young and top class, all boobs and biceps (not together .... well apart from the guv'nor who was drinking on the other side of the bar like the most unsly mystery shopper since Thomas J. Irvin).  Tim Taylor Landlord was on again, well I just HAD to have it this time what with my polo shirt n all, but I hid it from the pretty barmaid cos I didn't wanna look like an ale loser, just a normal loser will suffice thanks very much!  And I tell you, it was one of the best quality pints I'd had all week.  With the hopbines hanging everywhere, needless obsession with chutney and upmarket feel, it shouldn't have been THIS good, but it had the balance just right.  And when I went up to order a taxi, even this was done with the utmost style.  The barmaid then decided "Chips Away" was a well known phrase, and no one told her it wasn't (so frustrating!) so she ended up Googling it and being amazed it didn't bring much up!  "I'm looking out for ya taxi, they are normally quicker than this!" she said, then disappeared to the kitchen, I turned round, and this crazy Polish dude (he recommended Brewhouse & Kitchen so I knew he was mad) was waiting for me so I hobbled off.  Chocs away! 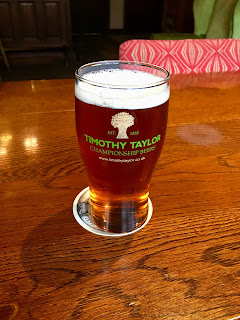 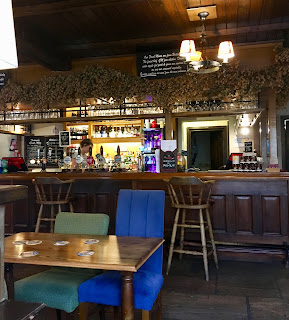 Back in Dorchester at South station, I'd done the hard part of the day.  Three pubs left, so I bought myself a day return to Weymouth, where two of them were.  And I'll tell you all about that in part 2 on Sunday or Monday.

Now, time for bed as I've got a Martin Taylor Cambs Special tomorrow lunchtime.  See ya on Twitter!  Only 20 Cambs pubs left to do.  Six or seven tomorrow.  Free pint of Papworth Pap if you name 15 of them.