BRAPA - Bringing the "A" Game to Outer Wakefield

Friday night and the time was right to start ticking those pubs listed under West Yorkshire.

There's probably about 20 to go at, pubs which are either brand new to the GBG, better now than they were in the period 2014-17 (or I'd have done them already), or they've just been open so long, local CAMRA have taken pity and thought they deserved a year in, the equivalent of a pat on the head.  You might think this practice doesn't happen, but am certain it does!

Not sure what category tonight's duo fit into, but safe to say they won't live too long in the BRAPA memory ......

It all started, like all the worst stories do, in L**ds on a misty Friday evening.  It wasn't officially Black Friday but enough shoppers were milling around to make you think it was.  A local stopping train with an engine that sounded very 1950's chugged into life, dropping me at Fitzwilliam where a half hour walk took me to Ackworth.

I'd done this walk once before, 17/2/17 to be precise, and you gotta learn lessons in this game, so I had my walking boots on this time due to those muddy paths as I negotiated Fitzwilliam Country Park, with only the faintest sliver of light left in the sky.  Quite terrifying, any local Robin Hood type could've jumped out at me, for he was actually from around here, so Nottingham & Sherwood can piss off.

Up onto the relative civilisation of Wakefield Road, my pub is one of SEVEN real ale pubs in Ackworth, so probably five more trips to go in the coming years!  My knee had been improving well (thanks for asking btw!) but I was feeling the pain when I reached the pub .......

"A busy non food pub ...." began the Good Beer Guide description, so when I saw a 'Pub & Grub' banner at the front of the pub, I assumed 'grub' must mean something else around here, perhaps the pub pet is a maggot or something?  It was an interesting semi-circular shaped building, with curved red bench seats in front and good stone floors, but after our barmaid gave me a quality White Rat (beer, not pub pet) I turned to the left and found what was in effect a restaurant area!  The four or five people in it looked at me like "shhhh, you've not seen this bit!" and I disappeared off to the right no questions asked.  You'd never have known it wasn't a proper West Riding boozer from hereon in, I could even smuggle my salt n vinegar Walkers squares without any fuss!  My Mum would've been a fan too, at least of the tightness of the jeans on display in here.  She's determined to get me some skinny tapered ones for Christmas, and has totally been 'jean shaming' my poor mid 90's baggy ones.  An edgy couple shared my 'snug', but were on edge cos their friend was just sat in the car park seemingly refusing to come in.   And then a canny Geordie with a Cancun baseball cap was told a story about some bloke called "RM" (ever heard of him?), something about bringing fags back from abroad costing 200 Euros ending with the line "what's your problem?"  Bucharest?  I didn't understand, but it was a conversation topic you tend to hear in 'proper' pubs, which this so nearly was.  Still, I was a bigger fan of the Masons Arms when I came to Ackworth last time. 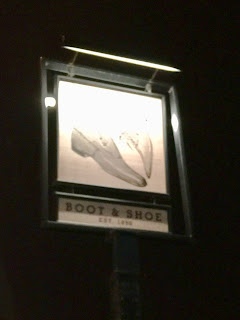 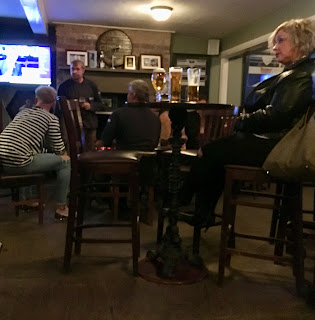 No way I wanted to walk back through Fitzwilliam Country Park and wait for the train to Wakefield, so luckily I found a bus stop right outside the pub with a 18:01 due in the next few mins.  The same lad who was stood here before I went in the pub was still here now.  He smiled, smoked in my face, but didn't get on this bus either!

Half an hour back into Wakey, and a mile and a bit walk out to Alverthorpe, another place I'd visited previously for BRAPA purposes.

That was back on 14/10/14, a good WMC, and I remember getting lost on the way, ending up in some dodgy estate where a chav eyed up my mobile phone, and I heard his girlfriend actually say "don't, it isn't worth it!" which actually I was insulted by, was she saying I had a crap phone?  I think she was.

So I walked a more direct main road route, and sure enough, the pub was soon looming out of the gloom ...... 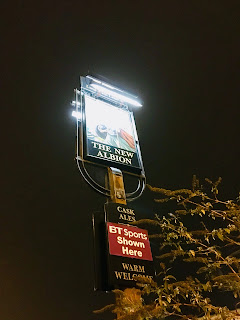 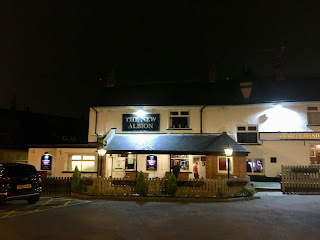 As I hovered around outside like some pub tourist loser not able to remember my own BRAPA rules (am I supposed to go in the left or right entrance in 2018?), I ended up asking the guy smoking outside.  Despite not having white hair or even a beard, he was giving off a strong Cap'n Birdseye vibe due to a stripey jumper and ability to talk out of the side of his mouth with pipe in.  "Arrrr, doesn't matter which side you go in matey (he didn't actually say matey), it ain't a rough pub.  We chucked that lot out a couple of years back!"  Hmmmm, reassuring(!)  The bar was a bustling scene of chaos as I ordered Abbeydale Moonshine cos you can't go wrong with a Moonie (so to speak).  I felt like I was making a connection with the barmaid, an other worldy type with very pink eyeshadow, a healthy suspicion of me, and she reminded me of one of those 'adult dolls' that men of a certain age (not 39) buy online.  But the pub didn't get any more interesting than this.  To the left, a group of blonde women with twild and buggies blocked the whole space.  Some stairs took you to a calmer area, and beyond there, an 'adult only' bar.  I almost went in, but instead decided to stymie any future twild-based groups by taking the only table outside this area!  Tactics you see.  Yet, I soon realised I was in a room where everyone was a middle aged woman drinking wine (they all reminded me of Emma Winstanley from work, without ever reaching 'full Winstanley').  Trowels were the decor of choice, it was all a bit boring, though friendly folk at least.

So that was that as I got myself back to York, via Wakefield and L**ds.  You know I like doing things in alphabetical order where possible so was good to start with two A's, hopefully every Friday can now have similar West Yorks evening trip.