Halfway through my pub ticking day, and it had been a great effort from the three villages, but how could the town of St Neots and its three GBG entries fare by comparison?


The signs looked good as I crossed the bridge.  It was trying to be a bit St Ives, but it didn't have the personable common touch.  It had more character than March, was less pretty than Ely, and the people weren't quite Chatteris-weird but they were pushing Ramsey-odd.  Fenland attitudes outside of the Fens are not something I am particularly fond of.  Unless it is Waterbeach of course, I've been told to remind you it is the best.  In fact, there was something almost Peterborough about the folk, you know the old 'I've seen a two pence coin in a gutter and I'm going to go scrambling around in fag ends and dog shit so I can retrieve it and show all my mates'.

But enough of my judgey Cambs review, you are here to read about pubs, not the opinions of someone superior from York.  The first was presumably a 'rock' pub for 'young' people.  I could tell cos it had a quirky name and a guitar on the outside. 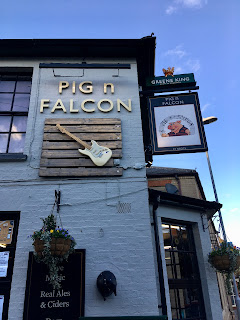 Nice to be in a spit n sawdust Greene King house, this is the first thing to say, for so many are lame dining venues now.  For fans of Cambridge pubs, think Flying Pig for scroats, but with better opening hours.  I was immediately confronted by a bloke in full army gear, who turned around to moan in general.  "Alright mate?" I asked stoically as I tried to scan the ales.  "Nahhh, I've got too much to do!" he replied, as he picked up presumably his 7th pint of Fosters of the afternoon, yanked the lead of his lugubrious dog which had the sadness of Terry Waite in his eyes, and went to the back of the pub to moan at some other guy.  The barman, a young rocker type, was a jovial soul, and soon he and his mate started making dog noises, and I've no idea why.  The jukebox was full of edgy tunes, but they went too far when Lostprophets came on.  "You can't play this!" said a third bloke.  "Why not?"  "You gonna play some Jimmy Savile then?" he replied to try and prove the point.  I'd not been at all sure where to sit, and generally moved from end to end of the pub.  I felt a bit like a shark in here, you have to keep moving or you'll die.  On the way back from a toilet trip, a pub cat appeared, but even this creature didn't want to pose and had that 'St Neots look' in that furry face.  The ale was good but had quite a kick to it.  Time to move on.


So not a bad boozer, I'd rather have that sense of amusing danger in the air than somewhere so 'safe' that it bores you to tears.

Our next place looked small and sounded irritating, but you can't judge a pub by its outer so let's go in and see if first impressions were correct. 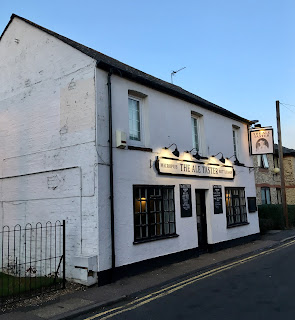 Being called the 'Ale Taster' wasn't just a lazy concept to try and draw in the beer drinker, no they were determined to see it through to the 'bitter' end!  I first discovered this when I looked in vain for handpumps.  "Whhh,,,,whhhhh....real ale?" I stammered like a bleating lost sheep, and the barman thought 'ughhhh, how many times am I going to go through this to visiting twits?'.  Firstly, he drew my attention to six different jam jars samplers.  They were all the different colours of beers you'd expect.  Next, he told me to squint backwards and upwards to six beer kegs behind glass in the same formation (may have been a board too?)  Then, he told me I needed to match the colour I liked to the ale I wanted.  My mind was blown.  Four stronger pints than usual in, so I just went for the darkest jam jar cos I could read the word 'porter'.  Or was it 'stout'?  It was probably about 10%  No idea who brewed it or the name.  Ale taster indeed!  A stern but helpful local suggested I should try halves then I could have two.  I made a joke about already being confused and having to drink pints.  Crickets.  As I sat down beyond him and his like minded men, I heard a growling.  It could've been the Westie, it could've been the locals, we'll never know, but I felt very much the outsider!  I could feel myself slipping into drunkeness.  I allowed it to ride over me in waves, it was safer that way. 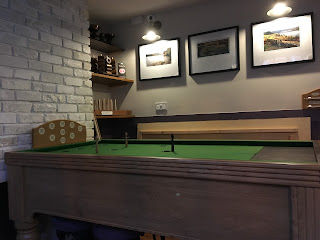 With the possible 10%er kicking in on top of the XXXB from earlier (always good to have your excuses in place), I staggered to my final pub .......

Even a short arse like me had to duck under low beams and around pillars as I made my way to the bar, that much I can remember.  This pub had a totally different atmosphere to the first two, warm and welcoming, and as old blokes parted to let me see the ales, I chose Adnams Ghost Ship cos I love it and I was told I'd chosen correctly!  Nice to hear, but makes me wonder how often they wait for me to leave the bar area before saying "can't believe he went for the Doom Bar, the tosspot!"  Anyway, wasn't a lucky guess, I tried to gargle that I'd had it before, they didn't believe me.  I squeezed myself into a table between toilet and jukebox, and figured that any pub playing Nelly the Elephant by Toy Dolls had to be considered what I think the kids were term a 'low-key banger'.  In fact, when I returned from the loo first time, I was met with apologetic glances as a swarm of St Neotians were right in my place, craning to select songs for the jukebox.  Then, there's a 20 minute hiatus where I can't remember anything, including where the loos were, walking the wrong way and a bloke who was a bit like a young Smashie and Nicey rolled into one directed me back to the bogs.  "I knew where they were earlier!" I pleaded,  he smiled sympathetically.  He was wearing a jumper that was so eighties Scottish, the only time I've seen it before was in the stands when Dundee Utd won 2-1 at the Nou Camp in '87.  First match the twild me had recorded on VCR.  Funny what you think of drunk.  Same bloke later guided me towards the exit too.  My performance in here hadn't been good, if I was a football team, I'd have been booed out.  Perhaps I was.


Despite walking 'the long way round' to reach St Neots station, I was still in Peterborough in good time and feeling a lot more sober after some cheese bites and a nice jug of Volvic.   Not enough time to get to my remaining Peterborough 'tick', so I went to an old haunt, The Brewery Tap. 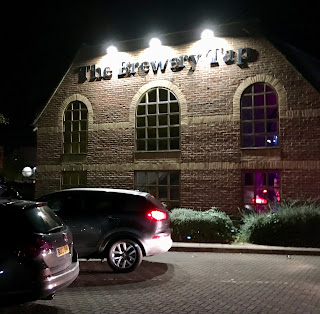 The first two times I came here, I LOVED it and declared it one of my faves in the country.  I love Oakham ales you see.  But now, it wouldn't trouble my top 100.  Too many 'closed for events' and 'Saturday evening party goer booming music purple lit atmospheres'.

And it was a similar story today, though decent service and good ale - I was served by a skeleton, even though Hallowe'en was 4 days ago.  I did something I'd always wanted to do but never done and go upstairs.  But surprise surprise, it was a Thai restaurant and some pretty Oakham stooge sent me back downstairs in her gentle blonde voice, but not before I tried to walk the full perimeter,  I perhaps wasn't as sober as I thought.  I sat at one of my standard barrels in the main bar, listened to the screeching scum and took a selfie which made me look 80 years old. 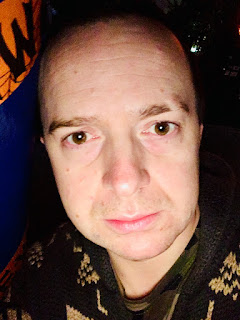 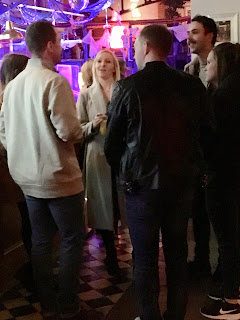 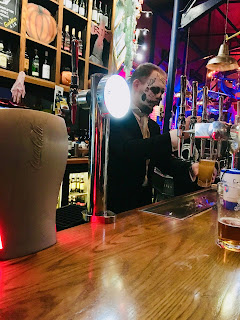 Back to York for 10pm ish, a pretty great day all things considered.  Huge thanks to RM again.  I'll be back in Cambs in December, Martin has it in his diary.  Six more planned, and only 14 left in total, 4 in Cambridge itself!  Getting close to the Cambs finishing line now.

Should be done by Feb and can then give Derbys, Durham and Cumbria the attention they deserve in 2019, with a bit of cheeky Dorset and Cornwall thrown in for good measure.  That's the plan.