BRAPA - Weymouth and the Kindness of Strangers 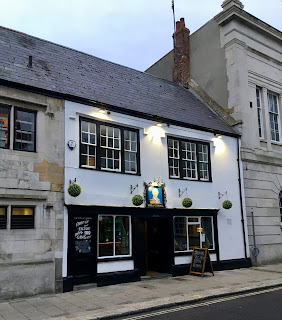 Midway through the afternoon on my final day of this wonderful Dorsetian adventure, and I still had three pubs left in the tank.

A short train ride took me back to the place it all began back on Tuesday, Weymouth.  I had to drag my buggered knee (which I don't like to talk about) ten minutes through the town, passing on the way the kind of pubs which looked intriguing in a 'if I was the late great Alan Winfield, I'd have gone in' kinda way:


I soon saw my first of two pubs, lurking moodily on a corner like a teenager waiting for her Mum to come out of the offie:

It had that lovely old fashioned nautical air about it, not wholly dissimilar from the Royal Portland Arms, though less terrifying (obviously).  And it was packed.  Everyone was over retirement age, and I had to lean over a sea of bar blockers (totalling an age of 876 probably) and shout for service.  As I waited patiently, a took a couple of snapshots to capture the spirit of this characterful place, and an old lady with the same expression as her dog saw, so I went over to explain BRAPA and give her a card.  She blinked non-plussed, not sure the word 'blog' has been used in this pub, and am ashamed that I was the first!  As horse-racing and darts rumbled away in the background and the smell of centuries old cigarette smoke permeated the air, there was something quite hypnotic and tranquil about the pub.  Then a lively group of codgers (all bald, even the ladies) turned up and talked very loudly about the 'youth of today always on their mobile phones' (doesn't include me as I'm officially not young), but then they settled into their main conversation topic, KNEE PROBLEMS.  Oh, how I could relate.  One guy they knew, Jim, had needed an op on BOTH his knees.  "Well, they won't do them at the same time, they never do!" said a lady.  "Well, they did in Jim's case!" replied the bloke.  I suddenly felt the need to swig off my dregs and leave, quick sticks. 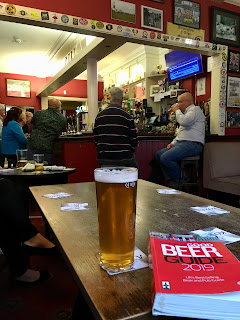 Even more deliciously basic than the Globe, wow Weymouth was really spoiling me this afternoon.  After initially wandering into the public toilets by mistake (and these were even more basic, but less delicious). there was a bit of a wait to get served.  "Has he served you?" asked the busier of the two blokes, returning from doing some important pub work (probably) out the back, and when I confessed he hadn't, muttered something under his breath about him being useless I couldn't really make out.  The two people stood at the bar gave me an amused look at this incident, and soon got chatting on BRAPA and stuff.  The lass was called Robin, and the bloke was called Andy Dunne (easy to remember  as my sister's boyfriend is called Andy Dunn) and turns out even they'd just met two hours before "....and she's already sorted my life out!" says Andy, explaining this is the type of pub where things like this happen.  It'd somehow out Globed the Globe, and it was becoming apparent Weymouth was the friendliest place in the UK, debunking my Dad's theory that the further south you get, the ruder people are.  I think that goes back to when we were walking to a bird hide near Bournemouth and a bloke cycled into us and didn't say sorry.  But Bournemouth, on the occasions I've gone, is a bit of a scroat filled shit tip, though I'll have to go back to be sure.  Anyway, Robin's bloke turned up and joined in the festivities from a slight distance, Andy nearly drugged me and stuck in the boot, so I could go to a 'Boot' which he says is an amazing pub, so I said if it's in GBG next year, I'll let him know so we can go together, so then there was phone number exchanging, and I left with my heart filled with the goodness of folk.  Shame my phone mysteriously deleted all photos I took here but one, but we'll put that down to some ghostly entity.  It makes most sense.

Jumping back on the train to take me back to Dorchester, a voice behind me said "nice shoes", referring of course, to my pale green New Balance, the official BRAPA footwear of the 2018/19 season.

She wasn't wrong, and this turned out to be a young lady called Georgia, another example of Weymouth friendliness at its finest.  She told me about the kids of Dorset putting on fake London accents to make themselves sound cool, the time she went to a gig and didn't get back til 5am even though she had an important exam next day, and how Instagram might be a better platform for my BRAPA check-ins than twitter, which might be something I'll get back on with cos I was using it circa 2015.  Really nice chat, alas she was off to Bournemouth to meet her boyf though so I hobbled off through the Dorchester night sky. 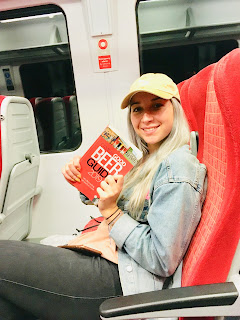 Dorchester seemed a spookier place in the dark, and after resisting the temptation to buy a pumpkin at Waitrose for no apparent reason, the local Aesthetics centre scared me more:


The pub soon appeared out of the murk, and you know when pubs but jokey comments up outside to make them seem hilarious and welcoming, I always find it a bit of a turn off 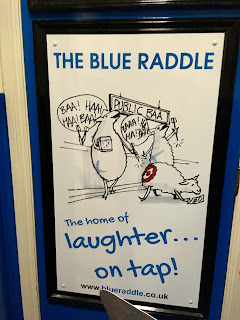 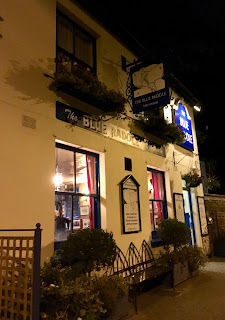 But over the course of the last few days, so many people had raved about how wonderful this pub was, surely they couldn't all be wrong?  And sure enough, I found a cosy carpetted gem with just enough beams and divides to make it feel like you were in a characterful old building.  "Oooh, I'll try the Red Cat, where's that from then?"  I asked the barmaid.  Truth was, I had actually no interest at all in where the beer was from, it was just 'something to say' as a bit of a tester to see how this pub did in terms of friendliness and engaging with the clientele.  Therefore, I felt a bit bad when she didn't know and went off on a quest to try and find the answer!  Did she?  I can't even remember, and the blackboard suggesting Punk IPA was on cask seemed more the more interesting question!  I found a little side table wedged between to adjoining rooms, drank my pint, and admired their albeit small collection of previous GBGs!   I'll find a 1975 edition and nick it one day, trust me.   Last pint of the day and all that, must say experience passed me by a bit after that, lots of dogs I remember that, but not much else!  I suspect the problem is in comparison with Weymouth, Dorchester is just a bit too 'Ken doll'.  By which I mean all looks very nice on the surface, but pulls the pants down and you'll find smooth nothingness, no cock or balls.  And on that rather disturbing analogy, we'll call it a night and say farewell to a wonderful mini-break in a previously neglected BRAPA county.


And this was how the GBG looked at C.O.B. on Friday: 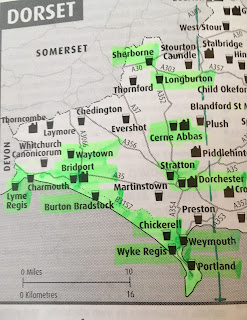 So that was that, home on the Saturday morning, and a whole 8 days of recovery (and boy did I need it!) before my next trip, which was with Martin on the 20th.  I'll tell you all about that soon, but I'll do my month end review/preview tomorrow.

Thanks for reading!  Si