It is blog titles like this which should be winning me gold & silver statues and plates at the beer writer awards, alas, probably safer to pretend I don't care, and declare myself proudly independent & punk rock.

It was Friday night and I was back in West Yorkshire, determined to finish ticking off those stray GBG entries before the end of January.  After Ackworth and Alverthorpe last week, we were still on the letter "A" with Armitage Bridge, a short bus ride from Huddersfield or if you want the full experience, a local train to Berry Brow and an interesting 15 minute walk, past church, winding river, and down the cobbles through a series of terraced houses, a real step back in time as Last of the Summer Wine played in my head.  Shame it was pitch black, probably beautiful views on a summer's day.

Speaking of which, I was vaguely aware this place existed, as Bryan in work (a guy who loves his ale but ordinarily prefers a good pub session to a beer festival) raves about 'Monkeyfest' held here every July.  I assumed he'd been on about the now dead Puzzle Hall Inn near Sowerby Bridge, but incorrectly, it seems I'd made a fake Monkey Puzzle connection in my brain!

He had admitted that he couldn't imagine just coming in here for a pint on a non-festival day, but my hopes were still high after the build up.  After all, on the train journey, two student girls opposite talked about Jellyfish DNA whilst clutching a large tub of Polyfilla.  Only on special days do you get such a pre-BRAPA treat.

At the pub entrance, two kids were hiding around the corner from their Mum and Dad, hence my rather blurred and rushed photos ....... 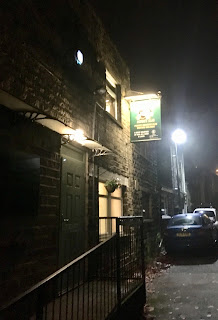 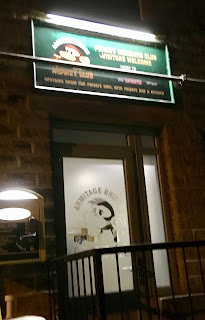 So yes, I expected more and this little club never really delivered.  An old bloke looked me up n down in a judgey way, but then orange scarf and Royal Engineers 1875 FA Cup winners top are probably not a combo they get much around here.  Barman was a solid, sensible looking chap, the two blokes before me had both ordered Carling, so I was glad when he pulled the Barncliffe Bitter through first (and gave it a top up, no questions needed) and yet the ale was fizzy and just tasted vaguely off.  It was freezing too, I took my coat off so I'd feel the benefit later, but even the Royal Engineers would've struggled in this climate.  I'd not had to show my CAMRA card to get in, and whilst the beer was a fantastic £2.70, I'd kind have wished I had as it often breaks the ice, and people in here seemed a bit stand offish, so I sat alone, between one screen showing basketball and one with Sky Sports News.  I had loads of time til the train so went back for another pint, much better this one from Saltaire, but very cold.  The kids got bored and played hide n seek, one tried to hide near me but was worried there might be spiders on the floor, so tried to get her Dad to hide her under his coat, but he refused to take it off on account of the temperature, even though he looked a proper Yorkshire hard man!  Turned out her brother had forgotten to look for her anyway.  Then, everyone started watching Mrs Browns boys clips on their phone, guffawing loudly like I've never done at this woeful comedy.   Time to sup up and head back to the station. 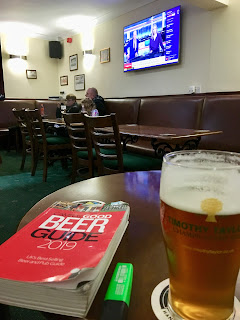 The train amazingly was back in Huddersfield on time.  That meant I had TWO whole minutes to get from Platform 2 to Platform 6 to get the train to Brighouse, where I had a second tick I wanted to get done.

But as I ran towards the underpass, I saw it depart.  It was 70 minutes til the next train.  It was a cold night.  I could've sat in Head of Steam / King's Head and had a couple of pints (no great hardship) but with a train to York around the corner, and a heavy day coming up tomorrow, I decided to be sensible and head back home.

And going back to the start of my blog, I guess that until I walk into a pub and write something like the following, the BRAPA trophy cabinet will remain empty.  Good night.

".....I spied a person of unspecific gender at the bar but wished to cast no aspersions so I had no opinion on them, or for that matter, anyone else in the pub.  I eyed up a delicious range of 6 cask ales and 12 keg beers (all of which I embrace equally out of respect to the brewers in the hope I get a free sample, an invitation to a tasting session, or a chance to 'collab' with them into making an ale called BRAPA P.A. which has always been hashtag lifegoals for me.  Incidentally, it was initially going to be named BRA P.A. but the pump clip was problematic for many.  The building I was drinking in had some fine exposed brickwork, metal pipes, 2016 chic I think they call it, and I had a great chat with strong young female Sommelier Marie-Sotter who told me why I was an inadequate average white man, 'gammon' and possibly 'triggered'.  Her 4 year old son Ethan told me Trump was destroying the world order and it made him feel rather tearful on a daily basis, and why do humans think it is okay to kill animals?  After being made 14% more woke by simply being in their company, I was given a tour of the nano brewery in the shipping container spray painted with graffito, and Charles, the head brewer, made a joke about the Irish back-stop which  was so dense, yet chimed so resonantly with 2018, that I smiled sagely to myself to display an inner intelligence I don't like to brag about even though I have more genes than most of my followers.  My friends of varying ethnicities then arrived and we all went for a bottomless quinoa and roasted tofu brunch at Maddie's Deli Eats, which had only opened ten minutes previously.  I went home feeling smugly superior, but sort of empty as I hadn't been morally outraged all day.  Fin."
Posted by Si 'BRAPA' Everitt at 10:18 pm