'Are you hanging up your stocking on the wall?'  Well, of course you aren't.  It isn't even December yet.  The word Christmas shouldn't even have entered your head.  But, and this is a certified BRAPA fact (not an actual fact, but a BRAPA one), 17.8% of all GBG pubs already have some kind of 'nod' to Christmas on their premises.

(Scroll down for pubs if you dislike rambling intros).

Saturday 17th November then, and with no Hull City to ruin our mood (god bless the Nations League, the Ember Inns of international competition) , Dad was happy to drive me around some of East Yorkshire's more far flung outposts.

When you hear people (outsiders) talk about Hull in that sneering way they do, you'll often hear "well, you'd never be 'passing' through it, because it is the end of the line innit?"   WRONG.  Head east out of Hull and you'll enter a strange land called Holderness.

You won't have read about it in any books, seen any footage of it on TV, you may have heard a whisper on a dark web forum.  It is said that Tolkien wrote a chapter of Lord of the Rings based in Holderness, but the editor deemed it too fantastical and consigned it to the waste paper basket in the corner.

It isn't far out of Hull, going past Hedon, that last bastion of semi-civilisation, that the sky turns a strange shade of soupy beige, the roads become narrower and gravelly and everyone drives within a pointless 30 mph speed limit.  You'll never reach your destination.  Wherever that is.  Even you don't know by this stage.  Drive into the sea, go on, no one cares anymore.

It doesn't matter in which direction you look,  you can see the Queen of Holderness.  I'm not fat-shaming some bint, this is actually a church.  The reason for this is that the landscape is so flat.  Flatter than flat.  So flat, even Lincolnshire is blushing and yawning.

So flat, it is flatter than the flattest pancake.  A pancake that has seen only the smallest squeeze of Jif Lemon and the merest dusting of sugar.  In fact, such is its flatness, that when it was batter frying in the pan, waiting to be tossed, Mumford and Sons latest single came on the radio, causing a flatness in its mood.  That's how flat it is around here.

*When is he going to stop jabbering on about imaginary pancakes and start talking pubs?* I hear you ask.  Sorry.

Anyway, my point is, if you are a weirdo like me who finds beauty in this bleak semi coastal scenery, and enjoy places like Sheerness, Portland, Isle of Man and the Wirral, I'd say this is a MUST visit part of the world for you.

So here we were, me and the good father BRAPA, and our 'early opener' if you like was in Patrington where I'd previously visited a pub on the outskirts.  "Don't worry, I'm not judging your chauffeuring skills compared with Martin Taylor" I reassured Dad as he struggled to park directly outside the pub and we had to walk AROUND A CORNER!  Ugh.

By the by, I WAS totally judging.

The worst thing about this place was the name.  But we shouldn't be too harsh on Amy.  Of course, to a pub ticker like me, I associate the phrase 'bar & kitchen' with some of 'the south east's' blandest Good Beer Guide entries, but I guess Amy is a very East Yorks lass and knows not of my pub traumas in Islington and the like.  The fact there was a shopmobility scooter outside just highlighted the paradox, and on entering, the owner of said vehicle was immediately apparent, a frail but friendly old bloke with a thin Holderness nose sipping an unknown black liquid at the bar.  "Wonder what ale that is?" asked Dad, as he ordered a cappuccino, and I ordered a good quality Titanic White Star.  As Titanic do an ale called Cappuccino, I worried this may be a problem, but it wasn't.  "I'll bring them over to ya" said the kindly barmaid, perhaps Amy, seemed more Vera to me.  She even brought my change which I'd left at the bar!  Could be a long day.  We sat in the sun, it was more like a cafe than a bar or a micropub, but unlike most 'beer cafes', it was cosy and had a dollop of East Yorkshire earthiness which allowed it to be thoroughly enjoyable.  Everyone who came in said 'now then', one bloke said to his wife "oooh let's sit out of the sun" and then shouted over to us, "isn't it nice to get some sun?"  Another couple came in, honed their eyes on me (of ALL people) and asked whether they sat down or go to bar and then sit down.  I said I was no regular but go to the bar first, and sun bloke piped up "they'll need to know what you are wanting!"  Very helpful advice.  With the strains of K7's wonderful "Come Baby Come" adding an extra quirkiness to proceedings, it was time to leave.  Dad's curiosity finally got the better of him.  "What ale IS that you are drinking?" he asked shopmobility man.  "Guinness" was the anti-climactic reply.  But probably all that was keeping him alive .  Good start to the day.

Next, it was off to end of the line to Withernsea, where Dad used to go on holiday. People in 'Ull pronounce it Wither-un-sea cos they can't do fluid movements (unlike me after a few pints!) but he's always fascinated to return to see how it has hardly changed since the late 50's/early 60's, though the coast has come further inland due to some pretty hardcore erosion. 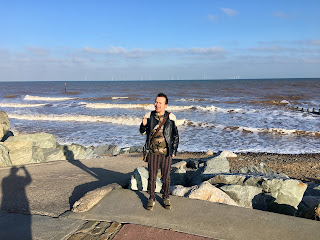 Dad actually had a plan in mind, which he told me, was inspired my Martin Taylor.  Incredible stuff!  "I'm going to let you go in this next pub on your own, and meet you in <27.5 mins> whilst I go off to buy some white emulsion paint from MKM Building Supplies".

Sounded a solid plan, but was soon in jeopardy, as Google did what the GBG, Whatpub and every other pub resource couldn't, and told me the next place was 1pm opener and NOT 12 noon.  Google was right too.   What's more, MKM Building Supplies, which had the same bewildering opening hours and industrial unit layout as an angry Birmingham microbrewery, was ALSO shut.  Probably brewing a collaboration sour with a famous beer icon for a bottomless brunch.  Best laid plans eh?

Luckily, and somewhat incredibly, we saw a shop screaming "PAINT" right next to the pub and where we'd parked back in Withernsea proper......


And as we walked into 'Hers & His', first thing we were confronted with was white paint!  Tonnes of it.  Well, gallons.  Litres! "I've got a special offer on that, 10 litres for £8!" says the bloke.  "Boom!" (not a direct Dad quote), and soon he was dragging it into the car with no help from me at all.


Next, we went into this Aladdin's Cave which I thought was an amusements cos it sold fizzy pop at the front, but opened up into this deep, dark, wonderful antiques shop with a large gothic section.  Okay, so no 1975 Good Beer Guide (doesn't exist), no antique rummer glasses, but a 50p Brian Close book and a lady tried to give me the hard sell on a 'Hetty the Hoover' (she even demonstrated the suction for me, ooo err!) so not altogether a waste of time.

Finally, it was 1pm, the shutters were up, and the pub was open.  Thanks Google, the modern day CAMRA. 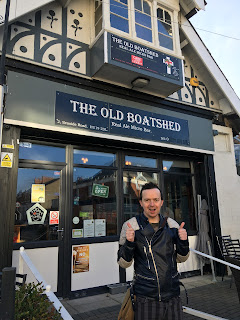 Bit ashamed to say that when it made its GBG debut last year, I purposefully decided not to visit in case it fell into the sea (gotta think tactically in this game, I've got the same view on the whole of Kent).  But a second year in, it obviously had something about it, and I walked in (first customer of the day) into this fairly cavernous micro, friendly bloke (quite quiet for a micro owner, think his wife may be the chatterer) and got this gorgeous 5.2% stout by the amazing Half Moon brewery.  And sat alone with my strong beer and read Martin's blog about the time I was drunk in St Neots, proof I never learn!  "Bet you don't do a Mild!" screamed the second customer looking triumphant.  They did.  He actually looked a bit disappointed!  Soon, Dad shimmied in with the air of a man who loves Withernsea a little too much and brought over his hot chocolate on a rather dramatic tray.  The toilet doors were saloon style, an excitable twog in what looked suspiciously like a Christmas jumper (can you shout 'Christmas Jumper Wanker' at a dog?) jumped up at me and I failed to look like anything other than a cat lover despite my best efforts to fake it!  Dog owner was a nice chap and tried his level best to control the blighter.  We'll discover in part two the problem with dogs and East Yorkshire pubs.  Silly to say but it did feel like a boat shed (probably because it was) and like so many EY micros, a bit like in Merseyside, I expect them not to excite me and then end up being impressed and this place was done really well.


Three more pubs to come, and things were about to get weirder in pub three.  Join me tomorrow night to hear about that, promise no rambling intros, emulsion or antique chat next time.  Thanks for your patience.