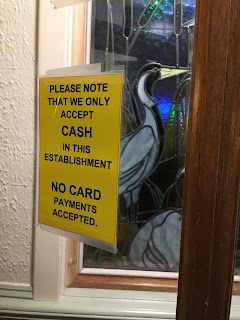 October has been traditionally the hardest month to get pub ticks in, so to come out of it with a 'club record' 46 pub ticks is amazing, considering I had things like Project Calypso at work, a bad case of man-flu and a dodgy knee I don't like to talk about, all trying to curb my ticking.

After all, I was booed off in 2016 when I only managed 13 ticks all month.  The October average is now 28, meaning May is now the most BRAPless month of the year.

What a crazy month it was.  It started in a vestibule, and ended in a hospital (if by hospital, I mean my own flat drinking a bottle of red wine) .... well, you can't be too much of a one trick pony with all this 'real ale' can you?


So stop waffling then Si, and get on with it, I can hear you saying.

Review of the month went something like this.  Dodgy even post-Calypso evening ticks in London.  A mixed day in Brum.  A wonderful mini-holiday in Dorset where places like Portland and Weymouth amazed me.  A great Martin Taylor A14 themed day which took in Northants as well as some of Cambs more rural holes.  Ending with a superb Dad & Tom day on the Wirral, where I was once again surprised by the quality on offer.

Still lots of blogs to catch up, but I'm getting there!

My favourite three pub experiences of the month were as follows:

But another six or seven I could easily throw into the mix on a weaker pubby month.


Of course, where there's an up, there's also a down and there were a good few pubs I was seriously less than impressed with, most in London it has to be said.

Whether it was the diviest Antic late night scare-hole ever, a total disregard for the drinker in a dining hell hole, or an absolute lack of cask beer in a chilly modern drinking space, there was plenty to get wound up about but all for the benefit of my blog, I guess.  I know you like it best when I suffer!

Onwards then into November, and plenty to look forward to though I can't imagine I'll get anywhere near the kind of figures I did in September and October, I'll be happy with circa 25-30 to be honest, the monthly average is 27, I'd take that now.

By the time you read this, I'll have had another Cambs day with the wonderful RM, only 14 Cambs pubs left to go after that so squeaky bum time as we say in t'trade.

A week later, actually going to see us away at Birmingham City.  I've edited Tom's pre and post match pub plan (changing at Orkney and Penzance for Bordesley or something) to make it more manageable, but looks like being just a 3-4 pub day.

A week after that, having a rare 'Dad Car Day' as we look to some of East Yorkshire's more remote outposts, and I finish with work colleagues on one of our  'Heavy Woollen' trips, Bradford & Halifax which I guess is more heavy woollen than recent trips to Walthamstow, Newcastle and Liverpool!

A bonus overnighter for work in Glasgow will help too, not to mention a bonus Co. Durham tick tomorrow night.  And thinking of a return to Friday nights BRAPA too, focusing in on West Yorkshire where I've got lots of new stuff to go at.

Have a good night, Si