Halfway through my Saturday with work buddies Jason, Piper & Rich and it was time to do one of those things that has never made anyone cry before, and that was 'leave Bradford'.

Jason knew where the nearest taxi rank was, having worked in this City back in the 90's, but problems ahead as I said to our lively taxi driver 'Wainhouse Tavern, in an area called Pye Nest or Kings Cross near Halifax' and he looked utterly confused.  "Do you have a post code?" he asked, so I dug the trusty Good Beer Guide out of the bottom of my rucksack, all crumpled pages and covered in pastry crumbs, so I start saying "H".  "A?"  "No, H".  "Aaaaa?"  "NO, H AS IN 'ALIFAX!"   Five mins later, HX2 7DR was finally in the Sat Nav and we set off.

Jeez this was gonna be a long journey, and it literally was.  Mine and Rich's poor bladders, the traffic was bad, and the pub itself was nearer Sowerby Bridge than the 'Fax.  Actually close to one of my all time faves, the Big Six.  I wanna go back.  But there's no point!  Relief to arrive, semi rural location, pubbiest pub of the day, hurrah!

Two further reasons to celebrate.  First, the obvious 1400 landmark, only 100 pubs away from the magical "one third of the Good Beer Guide complete".  Some time in March perhaps? (month, not shit Cambs town).  And secondly, this was my 402nd GBG tick of 2018, breaking the 401 record I achieved in 2017.  We noticed the back of the pub was reserved for Chris & Donna's wedding.  Now we all know a Chris and a Donna, and they're always doing things like marrying each other and reserving back pub rooms in rural Halifax.  All the classic BRAPA days involve me making an unwise ale choice at some stage, and it was the deliciously dark Jennings Snecklifter that killed me here.  Great ale, but when did it start tasting as alcoholic as Old Peculiar?  When I became a 3.8% pale ale drinking fanny, ayeeeee (said no Beer Writer of distinction ever).  The pub itself was interesting, a bloke eyeballed me (behind my back according to Piper) for taking a photo of the folk at the bar, a dog had a big dick, and Rich wanted a round of crisps and when the friendly barmaid asked which flavours, he replied "dealers choice, but make 'em meaty!"  I laughed, and our selection of four somehow included cheese n onion, salt n vinegar and fiery prawn or something.  A bloke leaned over, "I'm not trying to block out yer sunlight!" he exclaimed.  And then he drew the curtain.  Fully.  I couldn't stop laughing, this pub gave me the fits, and it might not have been entirely down to the Snecklifter.


Staff had been first class in here, and ordered our taxi back into 'Fax no fuss at all.  Of course, our taxi driver had never heard of the next pub until I said it was very close to the Victoria Theatre, where I think we went to another pub the other year. 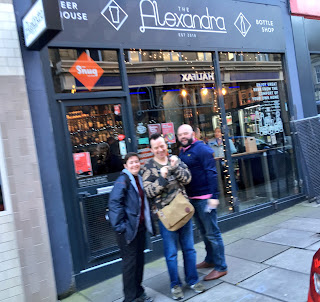 "Very much a micropub..." begins the GBG description.  No 'very much' about it, this was the quintessential micro to give Hillier (not Hitler) sexy dreams.  And I don't mean about pizza ovens.   Yes, after recent 'wow-factor' micros of a traditional pub nature (New Royal Mail, Thorngumbald) or just expertly done cosy classics (Lazy Landlord in Liscard) I was starting to 'warm' to them, but unless you go to the White Swan in Digbeth to go "phwooarrr, heritage!" and drink cloudy Marstons whilst some ancient leprechaun prods you in the cheek, then you won't go in a colder pub this winter.  It wasn't all bad, the barmaid was a gem, and deliberately having just the two beers on seems somewhat commendable, but beer is a minefield isn't it?  I don't have a clue.  Here, it was a toss up between Kowabunga and Ghyll.  I didn't know how to pronounce Ghyll, so I went Kowabunga, I did like those Turtles back in the day, Donatello was my fave, no relation to Donna from the last pub (that award has never felt further away at this point).  But then the Kowbunga went off, she was oh so apologetic in her hat & fleece , but we didn't care, just I had to ask how to pronounce it.  She didn't really know either.  Or was trying to make Stupid Si feel better.   We climbed up a narrow staircase and comparisons were drawn to Hard Times & Misery in Liverpool, but this had a bit less to it.  A couple heard me complaining about the freezing metal seats and told me to pull that blanket closer, they seemed very empathetic.  But as I wrapped it round, I started to itch.  Fleas?  That was the consensus.  Then I drank my Ghyll.  It tasted like beer, end of another wonderful BRAPA tale.


Following the GBG App to this sixth and final pub of the day proved a bit problematic.  Piper's knee she didn't like to talk about wasn't getting any better despite the alcohol intake, so the other three loitered as I walked around the perimeter of a strange building to some weird side entrance.  "This could be it!" I declared finally, and they caught me up:

But it was no Wentworth Detention Centre once we were inside.  "This can't be it" said Rich.  "What is this place?" said Piper.  "Bloody 'ell Simon, where ye taking us now?" growled Jason.  "Bear with me" I replied, after all, it DID have cafe in the name.  Ever been to the weird Chapter Arts Centre in Cardiff?  Or any of the ones in Tyne & Wear.  It was like them, only you somehow never really expected to find a bar selling real ale.  A twild looked up from his colouring book and glared at me.  A Mum with a coffee and a tan told her daughter not to play on the floor.  Two students on laptops probably talked about Jellyfish DNA and Polyfilla.  A blousey lady with the most floral blouse ever stared accusingly at us as I skirted around the seats.  She heaved her huge bosom in an exasperated manner.  Only a visit from BRAPA can lead to such bosom heaving, and I don't even mean that in a good way.  And finally, through a gap of bald heads, a bar!  What a moment.  I could've cried.  I went to find a seat and a loo as our Stodfold Golds and Rum Porters were wheeled out to the kind of table where I thought someone was going to make us write down ten motivational words on a flipchart and start some blue sky thinking.  And then, a voice behind me.  "BRAPA isn't it?"  This was Luke, who says he sometimes reads my blog.  How nice, so he sat with us and whilst I wasn't at my coherent best, he advised me Hull City were 2-0 down and Bradford were actually winning.  I asked him about pubs in the 'Fax and he told me something I'd be thinking since the 2019 GBG came out.  Halifax, this wonderful pub town as proclaimed by me and Martin Taylor last year as one of the best, has gone too far into the modern newbies, and sacked off those classics I loved like Three Pigeons, Gun Dog and that other one I can't remember.  Soon, it was time to leave this weirdness, time for a post or pre-emptive before the train?


Very hazy what happened next, but it seemed to involve time being too against us to get to the Three Pigeons as I'd originally wanted, so we ended up in this hotel opposite the station, perhaps called the Station or Railway or something.  The hotel receptionist became our barmaid, not a cask beer in sight, what did I even have, Guinness?  Doubt I drank it all, but friendly place, and it soon became clear our last train of the day to L**ds had been cancelled (on top of bloody Northern Rail strikes) so we had to dash for this one!

Ugh, typical end to the Heavy Woollen day, I fell asleep on Piper's arm, Rich went missing and no one could find him, and Jason prowled the vestibule like a caged tiger.  Rarrrrr.  Back in York, I got fish n chips and watched darts on ITV4 for about 2 hours and then a YouTube documentary on the Old Firm for no apparent reason, and was still in bed by 9pm.  Phew!  What a day.  Only TWELVE West Yorkshire ticks remain, gonna keep chipping away every Friday.