Half way through my Cambs day on Saturday 20th October, and with Martin in the driving seat, we sped away from the brilliant but slightly odd Duke's Head in Burton Latimer back along the A14 into Cambs.

This next pub, had the stench of wealthy high-end dining pub before we'd even hopped out of the car in the pub car park, though to be fair, RM had warned me about this one in advance.

Very pretty area anyway, thatched lovely pub, maybe it could be like, say, the Saxon Arms at Stratton in Dorset, and get the balance between pub culture and dining just right?  Give it a chance n all that! 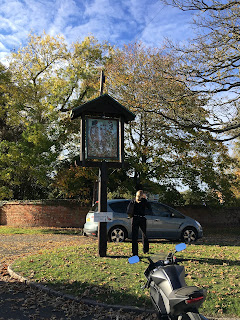 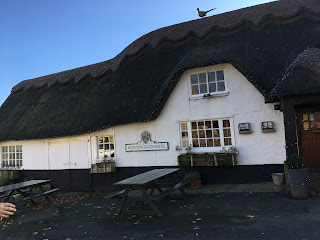 But as soon as we went inside, I felt decidedly grubby and working class and felt the need to converse in whispers as we got served.  This pub was in the 1974 GBG, I wondered if it looked like that then, description "pub in country, with skittle table".  It sold 'Ruddle'.  What I had today, I'm not sure, ask Martin, but it was good quality!   So we sat down not far from the bar, chatted on GBG strategy in hushed tones.  It had a pheasant, but it wasn't real, and neither was the one on the roof.   Now, it isn't always possible to pay the same attention to detail (i.e. other people) when you have company, but the two blokes at the bar had already used the phrases "tip top" "grand" and "chilled out" in relation to their lives (they've obviously never been on Project Calypso) and were quite happy for all and sundry to hear their foghorn voices, when one of them casually (but loudly) announced "wellll, I've been working at Lamborghini for the past month".  They'd earlier been on about wine.  "I had this wine once, it was very sweet, a bit like a port, but it had a name .... dessert wine?  Is that it?"   Me and Martin couldn't take it any more, and made a run for the car!

But fear not, the Pheasant at Keyston is in an incredibly well heeled area, beautiful setting, is Cambs dining pub of the year 2019, and did a good pint, doesn't claim to be a backstreet boozer, so you can't criticise too much.

And the reason I felt I could be charitable is that I was looking forward to the next pub more, cos I'd seen it in all sorts of Good Beer Guides......

After all, as recently as 1996 (okay, 22 years ago but recent to a trainee old codger like me), it sold only Draught Bass and was described as a "single bar , friendly village pub which has changed little in recent years".  Well, sadly (especially for Martin), this wasn't the case anymore, and yes I'm being naive cos pubs are changing all the time these days and doing food so they can survive blah blah, but still a shame!  Martin risked a local brew, the one I'd got was okay, but his tasted like the one time I tried to homebrew in 1997 and then crashed the car into the side of our house (my only driving lesson), but that's a story for another day.  "Friday Six Course Tasting Menu £95 for Two People!" screamed a blackboard.  A "Taste of Terror - 7 courses for £65" seemed a better offer, but it was all quite spooky.  A fire was in, that was nice, but the heat was blocked out by two twogs that greeted each other with the usual arse sniffing whilst their owners drooled in approval.  Plus I was getting increasingly drunk, at one point, Martin asked me a question and had to repeat it cos I'd practically fallen asleep.  Oops!   But can't say I enjoyed this place from the bits where I was awake! 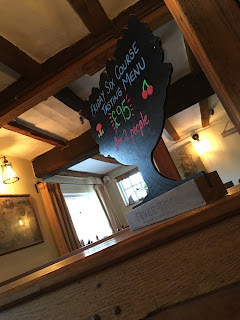 Martin dropped me back in Huntingdon and we said our farewells, as I took the train back to Peterborough where I had one tick left in me.  He was right I was fading fast, as back in t'Posh, I thought I needed to get a taxi to my next pub, but it looked like about 0.6 mile walk in the cold light of day.  Embarrassing!  Oh well, I was charged about £5 by the confused taxi driver and I stumbled inside:

The pub sign may've been a clue to the more observant clear-minded of us, but I was surprised to find what amounted to a sports bar as I pushed open the door and walked in.  In fact, a cage was across part of the bar, was like watching a match in the late eighties, and almost everyone was a burly beer bellied bloke watching Huddersfield v Liverpool.  Quite the tonic after the previous two pubs.   Problem was, where to perch myself?  Well, on a radiator (luckily not too warm, not an easy loo to rush to in here if Mr Piles comes calling) where I could at least watch the game and semi rest my dodgy knee (which I haven't mentioned all day cos I'd not had to walk anywhere).  I thought I might be moved though, because there was a carrier bag of cat food just next to me.  But it was never claimed, I didn't see a pub cat, or anyone who looked remotely cat-like.  Liverpool scored and the whole pub cheered (typical plastic scousers get everywhere!)  "You'd think they support the underdog being in a town like Peterborough!" I said to the only bloke with a full set of teeth who looked miserable.  "Well I'm a Southampton fan so I know all about that!" he replied and when I said I was a Hull City fan, he claimed we were as bad as each other, simply not true!  Anyway, at least I felt a bit more sober, the Mad Monk was better than my beer in the Mermaid, and on the way out, the Saint said something cruel about the Tigers, so I laughed and walked back, suddenly realising I was quite close to the railway station.


Back to York it was then, trouble free.  Making good progress with Cambs now, and I'd be back in two weeks time.  But first, a trip to New Brighton for my first pub ticks up north in 83 attempts, which is a BRAPA record which may never be beaten!