When I was doing my research into how to get around the more difficult pubs of Dorset, I was amused to note that for some of the most remote outposts in the north west of the county (Evershot and Chedington being the two prime examples) list a bus in the GBG and when you look it up on Google, it runs twice a day, at approximately 8:30am and again about 3pm.  Then you realise, it is a school bus!  The only means of public transport to get to these pubs.

Are you allowed on these?  Would you risk it?  Have any of you hopped aboard a rural school bus to help you achieve a difficult pub?  Please comment below if so.  "Joining us on the bus today kids, Simey BRAPA Everitt, he stinks of booze and is 39 years old, he has a red book and a green highlighter.  But just act like he isn't there".

Now I know what you are thinking.  I'm not thinking it, but you are.  NW Dorset TWAMRA are actually a very sophisticated paedophile ring.  I know it is 2018, and the world is a harsh scary place, but you shouldn't be having these thoughts, it is wrong.

So let's carry on and pretend the above paragraph never happened.  For your sake.

I was halfway through my adventures on Thursday 11th October, and it hadn't been the success of the Wednesday or even 'Portland Tuesday' so I was determined to get to three more pubs to salvage something from the day.

The bus from Charmouth to Burton Bradstock was no school bus, but may as well have been, so I squashed on uncomfortably next to a gaggle of teenage girls amazed that some girl they hated had commented on their Snapchat story, or something, and I was glad of Bridport Interchange (a bit like being in communist Russia) where it emptied out but an old lady with a beard and a woolie hat got on.

I arrived in B.B. about 4:45pm.  The pub had been doing what so many Dorset pubs do midweek and closing mid afternoon, til 5pm.  I hovered in the car park where a moody couple with dog were sat outside the bench waiting for it to open too, they didn't return my smile.

Then a crazy old lady started chatting to me.  Then she started flagging down any car that passed and asked for a lift to Bridport!  And only the SECOND car actually agreed, I could not believe it, they definitely didn't know her.  And as I stood there opened mouthed as she sped off, she waved and indicated the pub was open, so I was about the sixth person inside cos I'd got distracted.  Unbe-bloody-lievable this whole last 10 minutes.

It had to happen eventually, a dining pub, if you can in fact, call it a pub.  I'd been spoilt up to now, even the Lyme Regis duo I hadn't been a fan of could at least be classed pubs or bars.  It was Palmers led, for the third time out of four today, four out of five if you include the closed one first thing!   And I only had one ale to get, the strongest of the lot, called Tally Ho!  Well that caused a kerfuffle, the young barman looking at me like I was some piss head Northern scroat so I explained my little quest.  Apart from the small bar area which was one settee by a non-existent fire, and about 4 tables with stools, taken up by moody dog couple, everything was either dining reserved or had knives and forks galore.  Everyone coming in was after a feed, and the main man, who cut an impressive professional figure, always opened with "have you got a dog?" rather than "are you eating with us today?" or "what would you like to drink?" and in my weird mind, it came across a bit like "if you've got a dog going spare, can we bung it in the pot for our brown red soup?" but this wasn't rural Cambs.  I perched on the last of the 4 high stools, which actually was like a 'pub introductory' table full of menus, newspapers and leaflets, but I had little option otherwise.  And it wasn't long before a middle aged couple from Sussex were hovering painfully so I invited them to join me, I somehow knew they were nice.  And after exchanging neutral 'pub' platitudes, I leaned in and said ".....but it's not a pub is it?" and thankfully, they were swift to agree.  One of the four stools it turns out, has a permanent 'reserved' sign on it, and is for the three old boys who come in here every day just for drinks!  We chatted a lot, I properly nursed that Tally Ho medicinal goodness, had a long wait for next bus so the perfect pint.  A really well done place for what it was, welcoming, quality staff and ale, but just not a pub!

The next bus was going on the more southern route to Weymouth rather than Dorchester, but this was good news, as it stopped at a place en route where I needed a tick.  Reading the GBG entry, it sounded more of a dining nightmare than the last place, how is this possible? 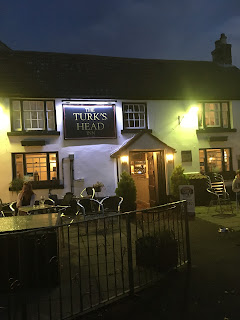 But whether it was the time of the evening, the fact it was midweek, or just that the Weymouth area is one of the most down to earth in the UK (as we'll see tomorrow), the GBG claims of food orientation, children, chickens, rabbits and holidaymakers was a world away from the fairly basic locals pub that greeted me, and what a relief that was, I was impressed.  I left my Dartmoor Jail Ale (which they put in their pies) at the bar whilst I went to the loo, where a load of tween lads who smelt of Lynx deodorant were guffawing and talking Fortnite, boobies and acne (probably).  Suffice to say, my Jail Ale when I took it to a side table smelt like piss.  They wouldn't have done would they?!  Across from me, a loud Scottish man seemed to be aware he was very much on the South Coast for he tried to be as Scottish as possible, giving his Southern lady companion quite a learning.  No one needs to be that Scottish.  I eventually picked up Guess Who from the pile of retro games (what was this, a micropub?) and chuckled at all the characters, used to love this game!  Quite a nice pub without being thoroughly convincing.

If I'd been unlucky with that pub closure in Whitchurch Canonicorum first thing, the flipside was that the bus I was waiting for turned out to be the LAST out of Chickerell this evening so I'd have to take that as a stroke of good luck, or it'd have been long walk/taxi time.

From Weymouth, I trained it back to the Dorch where remember I still had two pubs to do.  One tonight, one tomorrow.  Tonight, I headed for the Micropub down a very Micro-esque alleyway, bit confusing address wise as they'd just moved to a larger premises across the road ......

Though it might sound like it is themed on a pleasing sex toy, it soon became clear it is more 'rabbit' in the Chas (RIP) and Dave sense, you know the ole' Micropubs "encouraging you to talk schtick.  It had a great atmosphere from the off, the kind of perfect 'last pub of the night' when you are feeling mellow, jolly and everything is more amusing than it should be.  This was micropub at its very best.  Took a while to get going though, I've got a bit of a knife phobia and the fact that one was pointing at me as I tried to pay for my pint was as close to being mugged as I've ever been, so I left the cash on the chopping board and took a few steps back!   I couldn't stop looking around n chuckling to myself.  We had Bill n Ted by the piano, a bloke having a breakdown into a takeaway pizza and half a tree in the middle of the room which apparently contained termites.  I waited for ages for the lady to move her head, but in the end got impatient, so took photo anyway, maybe she wanted a termite hair infestation, who knows, see below!  Things took an even better turn when I got the ole' green highlighter n GBG out.  "We've got one of them!" said the barman, meaning GBG, not highlighter, and soon, and partly because I was dead centre of the room, it was like an impromptu BRAPA Q&A for the pub, does happen like that occasionally, always best on my sixth pint!  Even pizza breakdown chipped in with a couple, termite lady smiled too.  Great place, I told them it was "and I'm not just saying that!" so hope they believed me!  Good end to what'd been a tricky ticky day.

One more day to go in this fine county!  I'll tell you about that in two parts in the coming days, but I got too much Hallowe'en celebrating to be enjoying now so I'll be back on Friday evening now, I need to do the month end review too but can't decide whether to finish off reviewing Dorset first.  Let me know if you have a preference, I bet you don't care!