BRAPA - Hardy Harborne, after a Little Bit of Venice

Friday evening and me & Cathie should've been 'celebrating' the end of our final day working in London on that evil entity 'Project Calypso'.  Should've been, for we had to be back in Piccadilly Circus at 6am on Saturday to do some 'reconciliations'.  A bit like cross-ticking, but less glam or green!   They were sure getting value for money from us poor saps.

Tonight then, it was me who was the responsible one deciding only ONE PUB would be sufficient if we were to be up at 4:30am.  Of course, Duncan would've had halves in 20 new micro pubs, spotted a rare moth, watched a visit Azerbaijani second division side play away to a London Underground Pensioners XI, and not gone to bed, but I still have a lot to learn as the office 'junior'.

I got us on to the Bakerloo line and we soon arrived at a place called Warwick Ave with lots of posh houses where we wondered whether our new Calypso defect buddy & BRAPA fan Chinmaya lived, but couldn't be sure.    We were bound for a pub in a place called Little Venice: 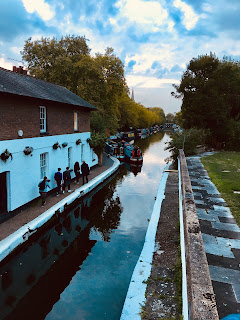 Martin didn't believe I'd taken the above photo, so it must've been a good one!  Now I've been to normal Venice and you could tell the similarities.  Stunk of a sewer, saw a pretty canal and bridge, everything over priced.  All that was missing was a shady Italian asking me to buy a rose for my own sister.  "She's my sister!" I protested at the time.  "Not bothered pal" he replied in Italian with a touch of Barnsley.  But it was all a bit too incestuous for my liking so she had to make do with half a lager instead. 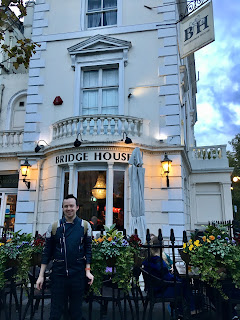 Although my initial slowness made me wonder if the B H sign stood for Benson & Hedges (it'd been another long working day) , it didn't take a genius to work out what kind of pub awaited us.  Clipboard menus, no beermats, posers, an upstairs theatre, no proper pub seating (everything too high or too low), Doom Bar the most prominent ale, lots of shiny surfaces and lots of 'safe' neutral colours.  When the GBG description includes the line "a good solid bar counter" you know they are clutching at straws for positives!  But my dull complacency brought on by the surroundings came back to bite me when a bloke pushed in front of me at the bar.  I gave him a glare, he didn't care.  Then him and his drinking companion sat in the seat I'd earmarked for me and Cathie.  Fuming.  I glared at him and told Cathie loudly how some people were rude and had no spatial awareness.  He just looked at me briefly.  HATED him more than any other person in a London pub on this trip, and that is quite a statement let me tell you.  In all the mayhem, Cathie realised she'd not got a receipt for my Tim Taylor Landlord and her gigantic wine so went back to the bar for something nicely itemised.  Despite reading about the upstairs 'Canal Cafe' theatre earlier, I still accidentally walked into it trying to find the loo.  Four expectant theatre folk looked at me and I immediately realised where I was so I made a joke about it, and they found it fucking hilarious.  A happy ending to my time in London.


Cathie thought we were off to my remaining 'tick' nearest Paddington, but back at Angel, it was evident we weren't so off to Waitrose for supplies before the most pain-staking taxi booking at the hotel (we didn't fancy the all night Tube) for 5:30am!

The early morning work session was finished a lot sooner than I thought, so I lugged my bags across to Euston where I eventually met Tom Irvin.  I'd forgotten to tell him we were pub ticking in Brum, not London, but that's where Dad was meeting us, so I apologised to the Clag Monster.


As penance for my sins, instead of getting a nice expensive direct train to Birmingham, Tom had us going via Watford Junction and on a slow stopper so he could get 'track' in or something Tom-esque.

The train was a pain, I only now realised how ill and run down I felt, and hobbling on a recurrence of my dodgy left knee I didn't like to talk about it, this time the back knee ligaments!  A weird bloke ate peanuts theatrically in my face to try n kill me, and he laughed when I pointed out Tom had now made three comments that made him sound like a paedophile.

We found Dad at the god awful New St station, and hopped aboard something local to a place I can't remember, from where we walked to Harborne in squally swirling rain and wind.  Relieved to reach a pub having been up since 4:30am, I tell ya! 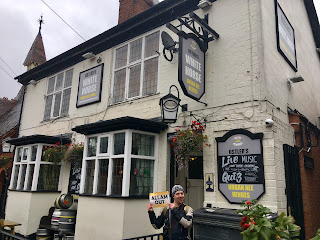 Amusingly, well not at the time, as I lined up to get the obligatory 'arrival' photo, my phone died and a group of blokes beat us into the pub at to the bar.  Dad wasn't happy!  I'd already denied him breakfast at the Red Lion in Hockley he'd been gearing up for all week.  And as soon as we got inside, my phone was straight back on!  Weird.  Dad started having deja vu at every turn ... "We've had that Church End beer before!", "Have we been here before?"  "Do I recognise him?"  "Did she serve us in that pub near Chorley?"  "Where do I recognise those cobs from?"  You know, that kinda thing.  We eventually got sat down and there was this lovely cat so I made some enquiries and turns out it is an 18 year old girl cat called Socks.  So small, you'd never have guessed she was ancient!  And just like my 12 noon pub last Saturday in Greenwich, a rare pub cat sighting!  Poor thing, the blokes were monopolising the old girl.  You could tell they were West Brom fans because although they were very friendly and nice to Socks, they didn't really do boundaries ', and trying to tickle her under her tummy constantly when her tail was swishing showed a naivety symptomatic of the Baggies.  'Stick to dogs lads, more basic like yourselves' I was thinking judgily behind my gorgeous pint of Church End.  I'm not going to slag off London, but this was a true West Midlands boozer I'd been craving/lacking, and I was a big fan of this place.  Would we regret not getting a cob?  That was the only question as we dragged ourselves up and off to pub two.


Now, when me and Dad were in the Bull's Head in Birmingham a few months back (great pub, rubbish beer, average food), a Twitter bloke suggested I go to a pub called the 'Hop Garden'.  I asked Dad to write it 'in the margin' in the 2018 GBG as a reminder (my hands were full of curried beans and rice!), and it would've been a good pre-emptive cos it is now in the 2019 GBG.

Sounded like it might be trendy and irritating, but wasn't, down in part to the fact that it was a former pub (the Sportsman) so this probably was why it felt cosy and lived in despite the obvious nods to modern decor, including a draughty back door by the bogs to an actually garden which is apparently going to grow hops in the future, which might be exciting to people with a rather different brain to mine.  The young bar dude was a real gent, and chatted to Tom and Dad for quite a while but I'm not sure what was said cos I was off exploring, but I think it involved Pipers crisp flavours cos we got 3 bags to tide us over in cob absence.  I got this amazing dark Oakham coffee porter I'd not seen before, though my glass said 'Oakham Les' so might've belonged to a local - a nice indication of an olde worlde pub(!)  I think the barman was a vampire too because he was definitely in my photo, but if you see below, just an empty bar.  Spooky!   But a really pleasant place to have a pint this one. 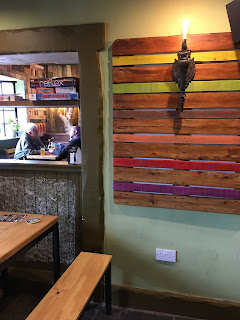 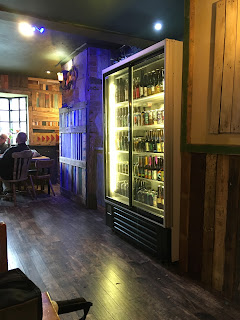 Well, this was an encouraging start to post-London pubbing, impressed with Harborne.  But it was about to go downhill.  Then uphill.  Then downhill again.  No wonder my knee was bad!  Join me for more tales of ale pubs and weird happenings in Birmingham tomorrow night.