BRAPA - How Posh Can We Go? Knightsbridge to Notting Hill

By Thursday and with only two and a bit days left to work on the now infamous Project Calypso from the Piccadilly Circus Grime Hole, it was now or never for one famous pub tick I'd been promising myself to get to.

Cathie decided not to join me this time, she had been nursing a hangover that morning, blaming me for that bonus Highgate Duke's Head tick last night.   "I didn't lead you there with a gun to your head" I tried to reason with her, but it made no difference, it was all my fault.......

Pub tickers are the Men That Will Not Be Blamed For Nothing!  I wrote that in graffiti on a wall in Hackney Wick last week next to a torn bit of shit stained West Ham shirt (that sounds really weird if you don't get the reference doesn't it?).

Anyway, I dusted wor (my) self down, and jumped aboard a tube to a posh area called Knightsbridge where all the buildings and shops were just a little too aspirational for the down trodden northerner in me.  The pub was tucked away under an archway, like you were entering some private palace grounds: 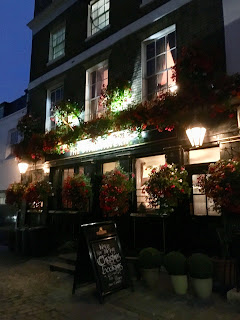 So this pub has been in every edition of the Good Beer Guide, so it must have something going for it, and apart from that vaguely snooty London air about it, you could feel the demure stillness and quality that you do often find in these pubs that've been around the block a bit.  A bloke was actually complimenting the pub to the barmaid, but instead of ordering a drink like a normal person, he picked up a leaflet and said "I must come in here properly some time and have a drink, byeee!" and wandered off.  Then another bloke walked up to the bar and made a joke pun based on a beer name.  Not often I turn out to be the voice of sanity but the barmaid looked relieved as I simply said what beer I wanted, paid, and wandered off for a quick explore.  I didn't get much further than the bar though as Bad Wig Doubtfire and a Melted Bowie were now propping up the bar, proof if it were needed that pub people are much more interesting than even your finest pub interior.  Unless you are a joyless fucking robot.  I found a surprising quiet back of pub, undisturbed yet within reach of other pubbers, with about three tables reserved for a Ms Kristensen, but not til 8:15pm so I kept her seats warm.  Beer Twitter voice of sense (probably) Cooking Lager commented 'Table Reservations = Not a Pub'   Hmmm, I agree, he's right of course, but can we make an exception just this once?  Probably not.  A group of old codgers started saying weird stuff I forgot to record.  Apparently, there is a butler in the bogs too so am sad I didn't need to pee, I could've unleashed my inner Tweedy on him.  Worth a visit this one, for sure!

The first pub looked so spectacular on the GBG App, I didn't think my night photography would do it justice so I've put both photos on to make sure! 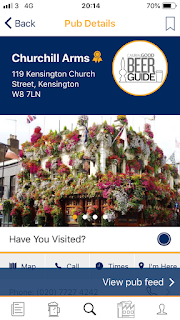 Good flippin' grief, what was this amazing pub paradise I'd entered?  You think the outside is good, the inside is just as spectacular (of course I mean the people mostly cos I'm not a J.F.R.), but like flies around shit, the pretty flowered exterior had drawn in the masses, whether it be tourists, students or weirdos with dogs, all three subsets of London pub life was here.  Decent sized place too, bit like a bigger Victoria in Paddington in the overwhelming sense of pub fun it gave me, minus the judgey bloke with olives obviously.  So many pots and pans hung from the ceiling, it was hard to believe something wouldn't come down crashing on your head, but this sense of peril only added to the excitement.  I 'used all my experience' to elbow my way to the bar and get a pint of Pride (drinking well it were) quite quickly as others dillied and dallied.  I had little choice to remain at the bar, but not as a bar blocker, as I managed to get in front of these tiny windows which I could spin round to shut me off from the bar so I didn't make any unwanted eye contact with the staff.  A great feature all pubs should have!  It was inevitable something weird would happen, and after a bloke in shorts brought this disgusting dirty dog to sit at my feet, he seemed intent on getting a lady he was either with or chatting up(?) a drink.  Instead of using the normal channels, he spied half a discarded glass of red wine which had been at my right shoulder since I'd arrived.  "Anyone drinking that?" he barked at me, and after some bewilderment, I told him no, and he passed it to the lady and said "there you go!"  Ugh.  She thanked him politely but didn't touch it, I'm glad to report. On the way out, I tried to find the loo but walked into a Thai restaurant hidden at the end so a Thai chap told me to go the other way.  I couldn't be bothered to fight my way back through the crowds, so left! 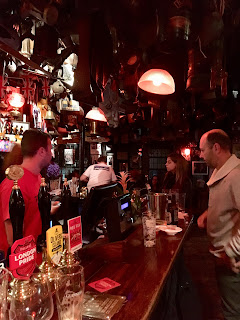 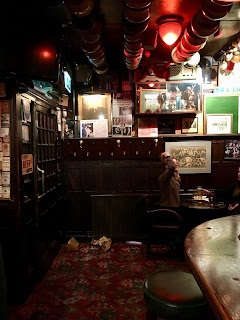 Well, time for one more just round the corner, and it had that sign to say it was a heritage pub.  Surely this couldn't top the other two? 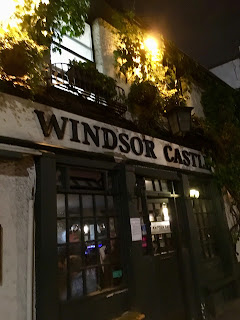 Well, no it couldn't.  If there was ever a pub that took advantage of it's location, reputation and status to rip-off their customers, it was here.  £5.05 a pint, there's no coming back from that, especially when that ale in question is an Oakham Scarlet Macaw, a great pint but nothing particularly specialist or strong.  You should always be able to get change from a fiver, and I'll be saying that til the day I die!  This is the joint most I've paid for a cask ale, along with a London Pride in Red Lion at St James in Central London.  And you know, it felt easier to accept back then, probably because service was so good, the pub was so pristine and the ale was so spot on.  Nothing was bad in here, and of course, you need your heritage pubs to feel a bit old and creaky but it felt like you were paying for the ridiculous small doorways between rooms rather than anything else.  I could barely even fit my skinny ass on the bench at my table, and the girls opposite looked miserable throughout, and they were having a proper full-on sesh in here!  Apart from the rather fabulous American young man at the bar with an air of George Michael and a coat that looked like TV static, who stroked my arm and said 'heyyyy man, no problemo' when I thought I'd pushed in by mistake (transpired he'd already been served), it wasn't  a very interesting place to be in my opinion but I could imagine someone enjoying it. 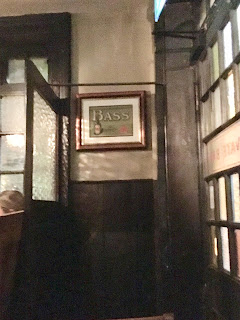