BRAPA - Calypso Dreams and Camden Screams : Another Monday in London

A second week of working in London then, well from Mon - Wed and it wasn't long before I checked back in at Highbury & Islington Doubletree and hopped straight back out onto the Northern line from Angel to Camden Town in search of new pubs.

I'd heard all about how quirky, fun and vibrant (terrifying words to a pubber like me) Camden was, so I decided to step with caution through the darkening night sky.

The first pub looked a gem, what with its green tiled exterior just about visible in the gloom, and when a man outside the pub trying to get a dog with a funnel on its head to walk in a certain direction shouted "oi oi!", I thought I was in for a treat.

And it remained intriguing as the 'amusing' barman, seeing me order a beer from Laines (the only real ale handpump available) asked me how i'd pronounce 'fabric' and I didn't get the joke.  The beer certainly wasn't called Lenor or anything like that, even if it did have a fragrant freshness to it.  Now the GBG does occasionally like to tell you it is raining when it is pissing down your neck, and the claim that this pub has been 'sensitively refurbished' were certainly not true.  Well, I mean, I didn't see it in ye Charrington days or yore but the extreme yellowness, bare cafe feel, smell of fish, all made me doubt it highly.  Okay, so 'the Hold Steady' played which are a band I've been waiting to hear in a pub since BRAPA began, so massive praise for that, but why are Mash & Olives an option on ANY pub menu?   Oh, and I'd missed Happy Hour by five minutes!  I'm not superstitious but pub 1313, and the 13th pub of my London Calypso tour so far?  Well, personally, I wasn't a fan of this place. 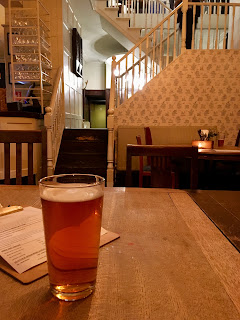 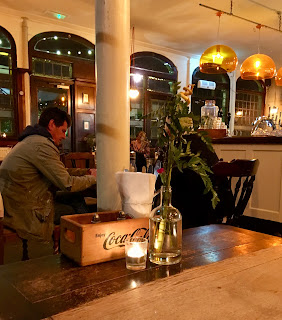 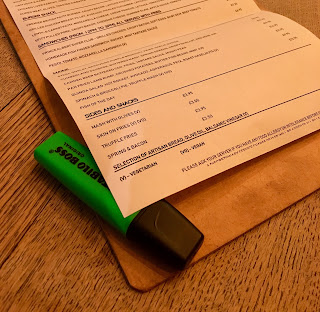 Just down the road over a crossing and river I came to another pub that looked nicely old and pubby, but didn't want to get my hopes up again just in case. 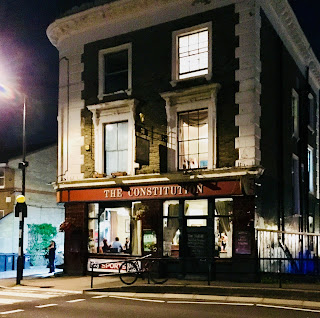 For a part of London such as Camden, this felt incredibly down to earth and 'real' on arrival, in fact the first five minutes were the highlight.  Difficult to get served, plenty of tourists AND locals all lining the bar, and an old lady sat on the end said "watch my eggs" (she had a box of eggs in case you wondered) and got up to go for a smoke, leaving me with an extra challenge.  When I finally was served some ale from Gloucester, it jumped out of the glass and splashed me!  The barman wiped me down as the two oldies next to me chuckled.  The way he accentuated his H's in "Half a HopHead please" was pure theatre.   "Lively beer probably a good sign!" I joked, but it wasn't.  Cloudy, took ages to pull, and never cleared, a second very tired Camden pint in succession.  Can understand why neither pub were in the GBG last time I was in this area.  When I turned away from this joyous scene of hilarity at the bar, well you could've cut the pub atmosphere in two as the remnants of a very sombre wake were happening in the back part, the pool table being utilised as a buffet table.  Those chicken drumsticks weren't going to eat themselves, I decided, as people hugged an old lady in black and subsided, but just then a barman swiped them away.  Bugger!  There were a few hoverers, some bright spark put some very jaunty reggae on the jukebox as if to say "right, the misery is over, let's get back to happy pubbing!" which felt a bit callous when you were there in person.  I'd meanwhile perched on the edge of a table where a man was boasting his blue hold-all was full of cash, but what with him wearing his various 'issues' like a badge of honour, I'd take that with a pinch of salt.  Still, a drunk lady at the bar, very much the Terri Coverley of drunk pubbing, found him entirely amusing.  I couldn't wait to down my rubbish ale and get outta there!

I jumped back on the tube to Angel, where my penultimate Central London tick was actually just a 5-10 minute walk away.  I'd nearly done this one in 2015/6, I was all set, then it got de-guided.  So nice to see it back in for 2019 so I could finally get it done.

It was on a street corner, it actually took me ages to find the entrance which I was supposed to use. 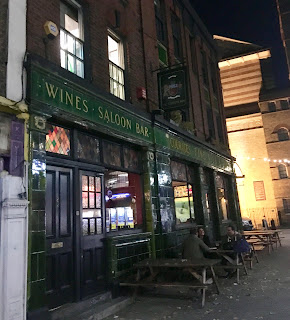 I've never done a London pub bingo card, but if I did, you couldn't spot too many more common traits than in here, though I must say, the under £4 a pint factor both shocked and amazed.  Still, there was a tip jar, and that is more of a common feature.  My ale, a bitter described as 'deep bronze' was much better than either of my Camden pints, but what was amusing was the way the barmaid pushed a card reader into my face.  And when I presented her with a fistful of cash, she actually said "woah, old school!"  I felt like a right Mudgiesaurus Rex, but was then immediately proud I'm keeping it old school.  Had there been a proper jukebox, I'd have banged on some Jethro Tull.  Still folks, the change is coming, we can't fight 'progress' or whatever they call it.  So what else features on the London bingo card we could tick off here?   A death defying staircase down to the gents.  Gorgeous interior brought into disrepute by mongs.  Beautiful street corner exterior promised lots but delivered little.  Staff all smiles but obvious they don't genuinely give a fuck.  Draughty door left open for no reason.  The last being a real pet hate of mine, and amusing too because the second I got up to leave, they closed and locked the door, which also meant I had to walk back through the pub to find a different exit!  Almost like they did it on purpose. 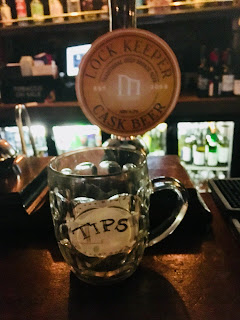 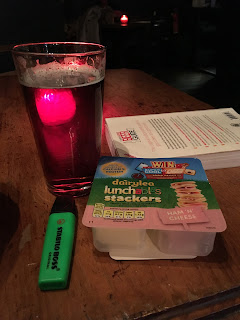 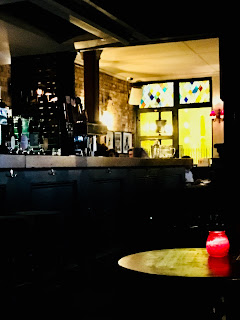 And that concluded another mixed night of London pubbing.  What did I get up to on the Tuesday three weeks ago, join me tomorrow to find out!  It's a better blog than this one.