BRAPA - Like Clockwork and Orange : City Slickers and Pubby Tickers

Tragedy befell us all as I left the office of Calypso HQ on my second day of working in London, on Tuesday three weeks ago.  As I delved into my rucksack, I had to face the truth, I'd left my green highlighter in my hotel room.  Sob.

"I don't suppose you have a green highlighter in the stationery cupboard?" I asked of project leader Lord Rachel, it was the most demanding I'd be in my entire London stay.  Lord R went in search of one, but couldn't find one.  "Och!" exclaimed crazy Lizzy from Coatbridge, probably wiping Buckfast from her mouth, "I got an orange one" before explaining she hated the colour green because she was a Rangers fan and I had to let her know when I was 'ticking' the Vulcan.

So there I was, dodging the manic streets of central London post-work with an orange highlighter, inferior brand too, Stabilo will cancel my sponsorship deal with them at this rate!


These first two pubs of tonight were two of the few remaining Central London ticks I had, both are so city--ish, they don't open on weekends, and it became very evident when I turned off Gracechurch St into the courtyard and was faced with 'suits' lining each wall and doorway. 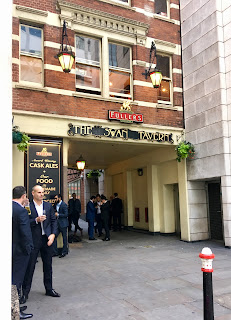 A tiny pub it was inside, not enough room to swing a rucksack with a highly confidential laptop in it, but when you're ticking on the hoof, you have to make the best of a squashy situation.  The barmaids, with a mixture of mild amusement, contempt and sheer loathing of their clientele, told some banker types (not me, I'm merely a back office clone) to stop singing!  Possibly tongue-in-cheek, but if it was dry humour, it was lost on me.  I was determined to keep my ground indoors and not spill onto the street like the other Dickensian wannabees, but something about this age in which we live, men of a certain age seem to think that wearing a suit gives them carte blanche to be dicks.   I drank my Oliver's Island, this was a Fullers pub, quite a lovely little place in many ways but hard to appreciate as former rugger chums grapple with each other at 6pm on a sunny Tuesday evening.  No room to reach into the bag for the orange highlighter and GBG, perhaps for the best.....


A real sense of deja vu hit me as I once again turned left off the main drag to find a courtyard full of suits lining the walls (I even had to do a double take to make sure I hadn't come back into the same place).  These city slickers were even more terrifyingly faux Dickensian ..... 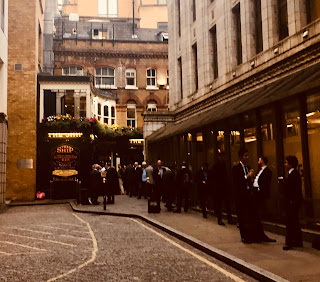 But once inside, it was clear that this was a more enjoyable pub to be in, having as it did, space to swing a cat / rucksack, and a welcome from the lady behind the bar more in keeping (excuse the pun) with a backstreet boozer in Todmorden than something central London.  She practically offered me a tripe sarnie.  Okay, so the London Pride was 5p more expensive than the last pub, and this was a Nicholson's rather than a Fullers, but I preferred the ale in here.  I decided I was safer heading for the back of the pub, where I perched at a ledge in the corner by two students, surely better than bankers?  But when the first thing I heard was him screaming animatedly to her "Tolstoy?  Dosteyevsky?  Fuck off dude, they're the guys.  THEY.  ARE.  THE.   GUYS!" all I could do was think 'do people enjoy being parodies of themselves?' (well, whilst recording the line for posterity obviously).  The only other vaguely interesting and unsavoury note was when two young ladies called Eliza and Charlotte were introduced to a randy old businessman called Brendan by another guy, and it all seemed to be going a bit down the Indecent Proposal route but am sure the rudeness was all in my mind! 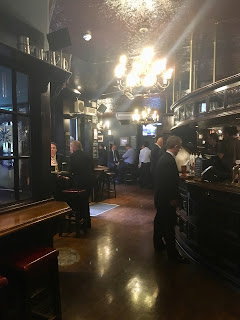 Very much like a rat, in London, your nearest GBG tick is closer than you think, ready to bite til those buboes appear, and I was closer to the river than I'd realised, which meant I just had to cross a couple of roads and I was near Cannon Street, where I could tick of a new Wetherspoons.

But for the life of me, I couldn't get across and ended walking down the wrong side of the bridge, pretty much under the Thames, and back up in Bermondsey after a longer walk than expected, where I had a tick I'd been highly anticipating ...... 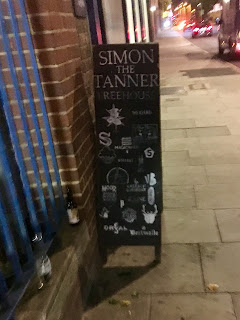 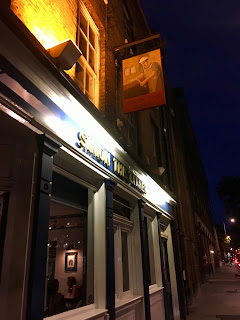 Yes, something about the name of this pub that appealed, I'd actually rehearsed this in my head for a while now, where I'd get served and ask whether people called Simon got their drinks for free.  Well, in the mayhem of the hipstery twenty somethings, a quiz night and dog blocking the floor, I totally forgot til I went to the loo, where I found lady with the air of Thandie Newton hovering outside the gents, smelling of antiseptic.  Trying to hurdle that bloody hound on the way back, I stubbed my toe and bent my toenail back,  proper painful, and this was the last day I'd wear my elaborate winkle picker style work shoes during my time on Project Calypso!  I had to sit at the bar, no choice, of course, the moment had probably gone with regards my 'Simon inquiry'.... but the jolly baldo seemed a nice chap so I still asked.  "Nice try, but no!"  was the reply.  Oh well.  There's bound to be another Simon pub out there somewhere.  Something I noticed here for the first time on my London pub ticking adventure which would become a feature of my time in the capital, was free water jugs at the bar for those wanting to stay hydrated.  2018 eh?  Fair enough at Winter Gardens after a 2 hour Exploited set but these folk weren't listening to Punk's Not Dead, but the gentle liberal hum of their wealthy southern egos being satisfied with life.  But like the beer, I wasn't that bitter, as a girl stood next to me waiting patiently to be served, as two weirdo beardos on the other side of us asked for a 'taster' of ALL the keg beers on, eventually settling for this pink monstrosity called 'Disco Fizz'.  "Ugh, looks like snakebite" she whispered in my ear, making the nicest thing a London lass has ever whispered to me.  The quiz started, it was time for me to leave.

I caught the tube back to Angel, next to where I was staying.  I couldn't really justify a fourth pub tick could I?  Well, when it was so close to the tube and hotel, how could I not? 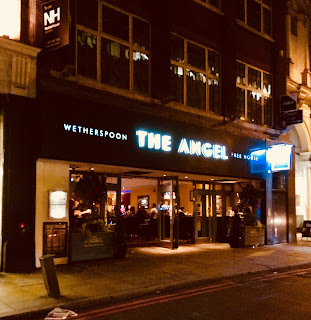 So I did finally get my 'Spoons, a night in London almost doesn't feel right without one these days and such a high proportion of my London required ticks are 'Spoons that I won't be failing to use those 50p off vouchers any time soon.  This wasn't a bad 'Spoons, and it wasn't a particularly good one either.  Most of the excitement happened in the first 3 minutes of my arrival when a wispy little man in pinstripes and sculptured beard, asked for a taster of the 'Reedley Hallows' guest.  He reacted by doing a little jig in a circle in front of the bar.  Now I've been to Burnley, and Reedley Hallows doesn't even get that reaction up there.  I ordered it too, but so amused I was, I headed all the way to the furthest back corner of the pub, battling my way past groups of students, before realising ..... I'd left my pint at the bar!  I've done this before, and as usual, no one seemed to think anything of it when I fought my way back for it.  I sat near a woman who looked like she was from the North West as she had a big stick, a sense of humour, and an expression that said 'I own all pubs' as she started chatting to some of the crazier student types, who were like the 1980's cast of Grange Hill gone wrong.  That was about it, though I left with the sense I could've got more involved to make this a more amusing experience, but to be honest, I was knack'd by now! 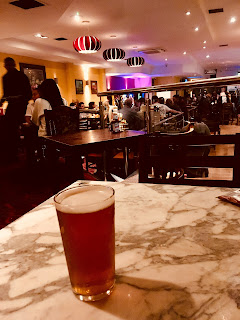 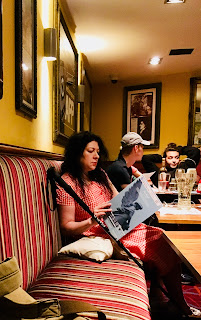 So, Wednesday was my last day in London on the first week.  I had to rush back for York Beer Festival, but I would be back down on the Saturday for a trip to Reading, and more London pubs before week two of Calypso fun!

Oh, and I never did use that cheap orange highlighter pen.  Keep it green.