Smack Alley met Howards Way as I took the bus from Weymouth to Portland on the Tuesday evening, having 'landed' in Dorchester earlier for the start of the BRAPA Autumn Festival of Fun. 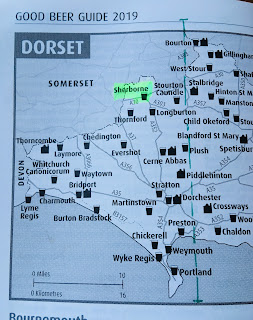 As you can see from my above map, Dorset was an unknown and neglected county for me.  Only the magical Digby Tap in Sherborne was a current 'tick', and that was back on 1st May 2004 after Hull City had won their first promotion in 19 years at Yeovil.  Football supporting has never been better than this day, despite Premier League, FA Cup Final, Europa League, Wembley wins etc etc.

I split the county into two, trying to focus on those to the west.  How much could I get done by Friday night?   Fittingly, I was staying in Brewery Square and the list of 'Dorset things to do' in the rather crummy Premier Inn (I'm a Doubletree Hilton man now darlings!) was never going to impress me.


So back to the bus journey, the first and easily the most terrifying thing about Dorset I'd encounter all week.  The toothless smoking Sainsburys workers, the scary former army bloke with PTSD who tried to twat a van driver for parking in front of the bus stop, and the college kids including Jay from the Inbetweeners who'd been to the sweet shop and were doling out 'bendy pencils' and 'jelly snakes' to their mates.  A simpleton made an elderly woman stand up so he had a seat. A Wyke Regis brunette was the only person I didn't want to hide from.

My initial reaction was to blame Weymouth, but it soon became clear all of these creatures were Portland residents, and Portland is barely even joined to the rest of the British Isles so perhaps their 'other wordliness' was to be expected.

The bus was almost empty by the time we FINALLY arrived at my furthest, and first pub of the evening.  Looked lovely, let's go in shall we? 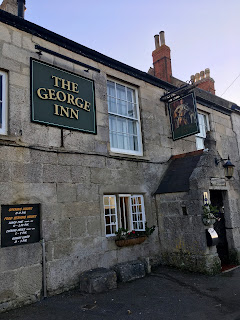 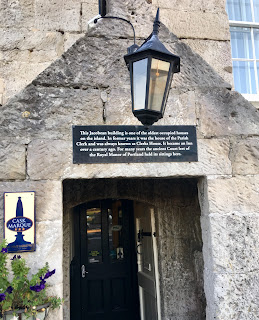 My lack of research or expectations worked in my favour here, the squashy stone gem really was your veritable 'step back in time' as a narrow corridor took me to a small bar area, all slate floors and warped wood as a friendly matron called me 'luvly' and served me a perfect pint of London Pride (as if I'd not had enough recently and at £3.70, cheapest in yonks!) whilst a tall lanky bloke in Hawaiian shirt hovered behind me trying  to set up some turntables.  I just prayed his songs weren't Calypso themed.  What with a another couple by the window, there wasn't even room to swing a cat so I walked back down the corridor into one of the nicely darkened side rooms, my one having a cricket theme and allowed me to finally relax and get myself 'sorted' after all this crazy travelling.  Occasionally, a blonde woman would leave the pub (there were about 20 of them who all looked the same), peering in like I was a zoo animal on the way out, they seemed friendly folk here.  Could've done with some heating on or a nice fire, but I guess you get that in the more ancient pubs of this type, thing about these heritagey pubs, you aren't allowed to be overly comfortable as well as awestruck. 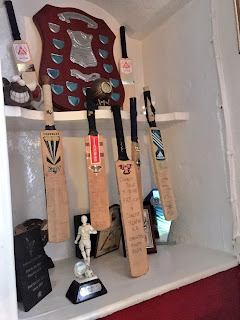 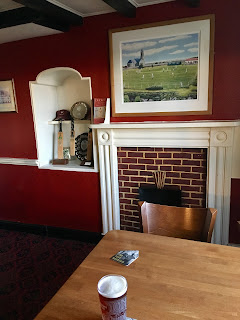 Portland's slight undercurrent of oddness was obviously affecting me as I flagged down a bus going the wrong way, muttered something highly unintelligible to the driver, talked to myself, developed a nervous twitch in my eyebrow,  and went on a needless circular tour of Portland before we got to the second pub.  Yet, my behaviour wasn't frowned upon, I was becoming "ONE OF THEM".

The sun was setting behind me over whatever bit of sea/water it is ...... 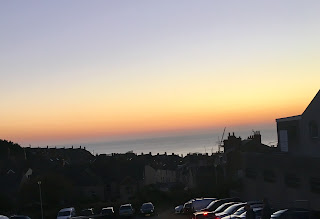 Yet turn 180 degrees and the pub was still bathed in daylight: 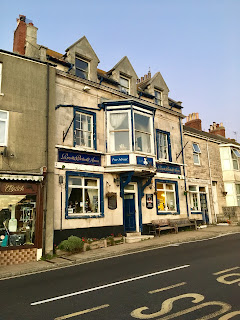 But I soon realised I'd only scratched the surface of Portland weirdness when I walked into this crazy boozer, where a selection of woodland folk blocked the long bar from end to end, all pissed out of their mutant skulls, all laughing raucously.  But this is how pubs are supposed to be isn't it?  Yet the scene seemed like something from a different age, and that's sad in itself isn't it?!   I can only describe to being like the more rugged pubs in Douglas on Isle of Man, with perhaps a touch of the old Cornish boozer, like the Star in Crowlas or Countryman Inn at Piece.  But rather unique.  After about 5 minutes of jostling for position and service, the Leather Gandalf in front of me apologises, saying "blocking the bar is rude".  Another wow moment, a bar blocker with self awareness is a rare thing let me tell you in this, my 2318th GBG pub, possibly the first time this has been admitted.  A random purple haired lady drinking next to him sees me, rolls her eyes, and runs round to serve me.  After passing my change, she says "I'm only doing this because there's a rush on, I want to get back to my drink!"  So me arriving in this pub constitutes a 'rush' on, brilliant!   So I become the first person to sit down at an actual table, and I tell you, I got suspicious glances throughout as I tried to drink my pint as peaceably as possible!  The highlight was when the most pissed bloke with moustache and jumper straight out of the 1970's or Pontefract waddles up to me and indicates to the window sill behind me.  He wanted something but couldn't put it into words, he just gargled like a zombie Savile.  The window sill was full of tourist info leaflets, but turned out he was after his phone charger and phone, plugged in behind me.  He didn't thank me, just grabbed it and scowled.  "Drinking all day ain't working is it?" leather Gandalf roared at me, he was the friendliest of the lot, though I didn't know what he was on about.  What a place, a corker!

At the bus stop, some demanding Spanish students tried to ask me about local geography so I told them I was clueless.  Finally my bus turned up and we drove back across that thin stretch of sand  into what most Dorsetians presumably call 'civilisation'.  I hopped off for one final pub of the night and to buy some food supplies, just south of Weymouth in a place called Wyke Regis. 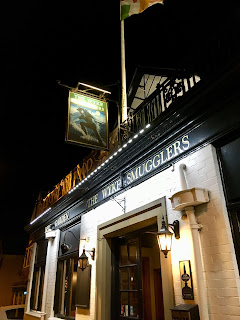 Certainly a more 'conventional' pub than those Portland pair, but then I guess anything would be.  The sound of crying twild life was not something I'd expected though amidst the dark expansive carpetted surroundings at this time of night on a wild October Tuesday.  But never mind, it still had a warmth and humour I'd come to expect from Dorset.  "Is tha' Proper Job strong enough?" asked a local, as I deliberated and eventually ordered it, was it my fraught expression?  Did he know I'd just come from Portland?  Very perceptive.  I settled down on this overly low black settee and one of the two Asian twild lads came to sit with me.  His Dad came over to apologise so I explained it'd all be good for BRAPA.  But just as he warmed to me forcing my favourite topic of conversation on him, said Twild had made a run for the exit - a more typical reaction to BRAPA!  This was Thackley all over again.  So wifey started talking to me, turns out they were on holiday from Phoenix, Arizona.  "We're staying in a caravan in Portland ...... it's errrrm different!" she admitted, but revealed how friendly folk were.  Poor lady, she was desperately trying to squash as much food into her mouth as she could (I told her she needed a doggy bag, do they have them in America?) whilst rocking the crying younger twild, as Dad stuck his head back through the pub and told her she'd best come quick and presumably join the search party for the older one!  Amazing scenes, who'd be a parent?  Not me, I said to my GBG, cradling it in my arms.


I got the bus back to Weymouth, and caught the train back to Dorchester and retired to my room for the night.  Wow, what an introduction to pub life in Dorset that had been!  Could my first full day ( Wednesday 10th Oct) even come close?  Join me tomorrow for tales of that one.