BRAPA - Tom Foolery and Blackcurrant Water (in the Jewellery Quarter) 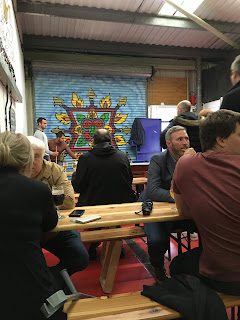 It was Saturday afternoon, the two GBG entries in Harborne had been a success, and it made sense to walk along the wet leafy road towards Edgbaston where the 'mid-point' pub was situated.  My dodgy knee (which I don't like to talk about) probably wasn't up to it with hindsight, especially with a bank laptop trailing behind in my bulging sack.

I think we all turned our noses up before even entering pub three ......

Fitting really, I was sure in need of a physician.  But you were more likely to receive the bedside of manner of Kate McCann than Florence Nightingale in this place.  Shall we get the highlight out of the way early?  Yes, a jolly bald bloke serving impeccable Titanic Plum Porter.  Gorgeous.  I noticed it was a Brunning & Price pub, which meant nothing to Dad, but in my attempts to describe their characteristics, all that came out of mouth was a weird gargling noise.  I don't dislike B & P's.  Lame and a bit irritating are about the worst things you can say.  I'd probably describe them as 'Ember Inns of some character'.  I like their buildings, grounds, furnishings and slightly shoe horned efforts to creating a high class relaxed drinking experience.  But this was easily the worst example I'd seen so far on my BRAPA travels.  And the furthest south I think I've found so far.  The reason was simple, total disregard to drinkers and poor attitude of staff.  A bit like my sour experience at Whitehough a few months back, but without the summer garden 'get out of jail free' clause.  It had seemed too good to be true when we'd found a seemingly unreserved table for six, full of knives n forks, but soon some airbrushed 20 somethings were brought through, full of apologies at turfing us out, but not before Tom had soiled a knife & fork removing an erroneous lime slice from his blackcurrant squash.  "So we'll just have to hover in the main room until a seat becomes free then?" I say to the waitress with as much passive aggression as I could muster.  "It's Saturday afternoon, our busiest time!" she replied and walked off.  Which I interpreted as "what the fuck d'you expect BRAPA?  Take your Utopian view on how a pub should be and shove it up your ale hole, sideways!"   I apologetically asked a disturbed looking bloke with beady eyes and grey stubble if we could crowd round his high stool in the main bar, he nodded reluctantly, and I spent the rest of my time complaining about 'restaurants'  whilst enjoying my spectacular TPP! 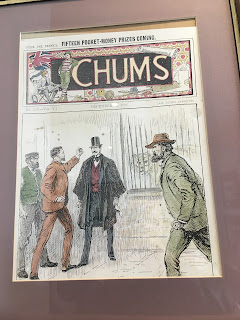 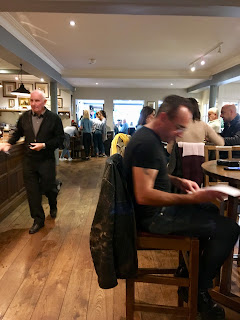 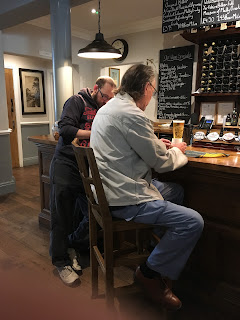 Back in Brum, we got ourselves to the Jewellery Quarter where, as just as in the 2018 GBG, there were new pub ticks to be had.   Two on this occasion, five pubs would be enough today rather than the usual six after the long week! 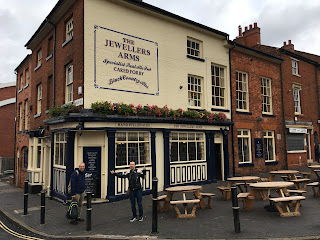 Looked ace, but surely there was a catch?  After all, if it was THAT good, it'd surely be in more regularly than unconvincing stuff like 1000 Trades and Rose Villa Tavern, wouldn't it?  Well, not necessarily.  We walked in and it was shocking stuff .... a proper pub with lots of old people saving 'pet' and 'luv' and being pubby, the likes of which I thought I'd never see again!  I almost cried as we spied signs for cobs, that's a Brummie 'filled roll' if you are B G Everitt, something we'd been craving since the White Horse in Harborne first thing.  A perfect pint of Pioneer was pulled with foamy gusto, Dad made enquiries into the Cheese & Onion situation, and a lady who could've been sister / bar colleague or local friend (or all three) to our barmaid swigged off her pint and volunteered to go down to the kitchen to make them for us.  A scene to restore your faith in pubmanity.  What a difference a pub makes.  We were soon saying farewell to Tom, who had to get back to Grimsby via London (ooops) so had to leave early.  The one remaining highlight was when I sniffed and a bit of red onion got dislodged up my nose ..... this time I really was crying!  Wonderful pub this one. 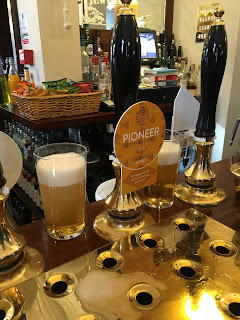 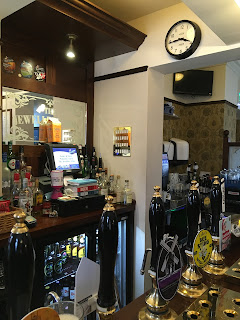 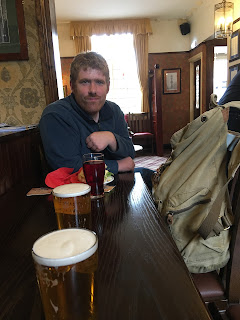 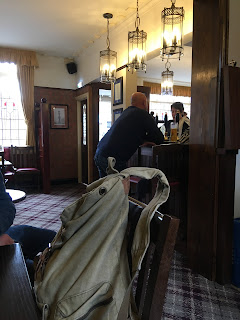 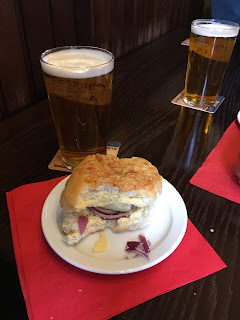 Tempting as it was to relax into mid afternoon hazy pub bliss, I had to motivate me & Dad to push on to the final 'pub'.  Not that either of us would thank me for it, as we walked into some industrial estate where a graffiti clad garage lock up was situated with the kind of piss-taking opening hours which make me, Martin and Duncan wince.

But let's be open minded, after all, to all intents and purposes, the nearby Rock n Roll Brewhouse from last year had us all sneering with it's opening hours and three line GBG write-up til we actually went and realised what a joy it was.  Could this be similar?

After all, Dad SHOULD be open minded.  Remember our pre-emptive visit to 'Kilder' a few weeks ago?  Yes, Dad ordered a Burning Soul Breakfast Stout in the absence of a Canadian one, and proved himself the king of the craft revolution.  We tentatively stepped through the door and the first thing you see is a pool table.  That is as pubby as this place gets, no concession made for any kind of comfort or cosiness,  harsh metal benches, the kind of location an alien would bring you to probe your ass.  At the bar, the usual confusion reigned.  My round, so I ask "what cask beers do you have on".  "No cask!" he replies, rather too triumphantly.  Hmmm, so what exactly are you doing in the beer guide?  I didn't ask that, I should've.  But I'm no dinosaur, I've had some quality keg shite this calendar year, but not this, we got the least threatening sounding one and tasted like wallpaper stripper and battery acid.  Shouldda gone for the Breakfast Stout!  So we did.  Better.  And don't think about paying by cash, they are far too cool for school in here, I had at least three electronic devices pushed in front of me.  The 'Brewery Tour' signs were odd too, you could see the brewery bits behind us.  How long would a tour take?  2 mins max?  Dad didn't only highlight the GBG green, he also wrote "Brewery Tours FFS!"  What a nonsense of a Good Beer Guide entry. 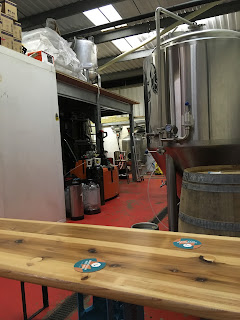 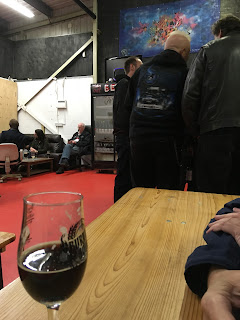 Well, it's been said about pub ticking in Birmingham before, it's all shits & giggles ..... until someone giggles and there's shit.  I can't quite remember, but something like that.   Always an experience anyway, never short of BRAPA material, and you can't always say that of London ticks.

Hobbled home, had to meet a baby and eat pizza the following day so tried to rest, and then one day at work to get through before my BRAPA Autumn Holiday in Dorset.  Non-stop at the moment isn't it?  Join me for day one of my write up tomorrow.