I didn't even need to be back in London for week three of Calypso until the Wednesday of the following week, so it might seem bizarre that I decided to return of my own volition (hang on, is that an Antic beer?) on the Friday evening for another overnight stop.

I'd actually been planning a North Derbyshire (outer Chesterfield) trip for the Saturday, but it just wasn't grabbing me, too many Northern monkey muppet melts.  Good grief, I was becoming a fully fledged institutionalised Londoner.  Dress me in pearls and cockles, get me a free bet of with Ray Winstone and sit me under the Bow Bells with the ghost of Marie Lloyd.

In truth, I had a free York-London ticket work had paid for expiring Friday evening, and I had a free return journey London-York for the Saturday courtesy of a kind Twitter follower.  So all that was needed, book a cheapo Travelodge in a cheap part of London I'd never explored before with pub ticks aplenty.  Greenwich was the answer, though Deptford to be more geographically accurate.

Arriving just after 7pm, Deptford High Street seemed to be what Leystonstone High Road had been for me in 1999, a mass of vibrancy, pot smokers and the remnants of fish guts from a closing market being washed down drains.  This was peak London.  I'd not even checked in yet! 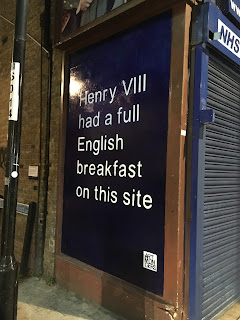 Straight back out again after a quick spray of Lynx, I was feeling the full hopeful tweenage boy as I walked back along the High Street, north of Deptford centre into a leafier area where a pub recommended by the good lord himself, Martin Taylor, was situated.   I've never hated a pub he's loved, to my knowledge, and it wasn't about to start here, after all, the online GBG app photo had me chuckling all the way south of Grantham: 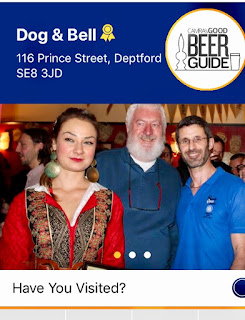 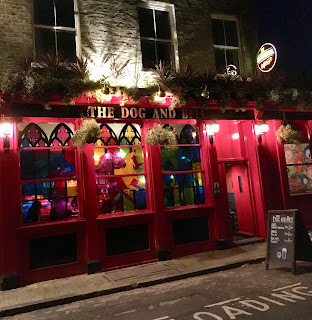 And what a classic it was, the warm woody and red interior and stained glass windows, ships, hopbines, mirrors, happy community feel.  What's more, a warm welcome of "how ya doing mate?" from the lilting Irish curly haired chap behind the bar.  Actually turned out he thought he knew me, but from where?  "BRAPA?" I replied, trying not to sound too egotistical, but he looked non-plussed and ventured "St Albans Beer Festival!"  Nope.  "Nottingham Beer Festival"  Nope.  I tried to help him out?  "York Beer Festival".  No, he'd never been, but he had been to a micropub in York.  York doesn't have a micropub?  Shambles, little place.  "Oh, do you mean Old Shambles Tavern?" I asked, he referred to the beery bottly cafe place which closes early (I've probably been about 4 times in 5 years), so we decided it must be that, but I've only ever been served by rejuvenated young offenders in there (because that is, or was, what the Old Sham Tav used to be all about!)  At least it had me in an even smilier mood than I already would've been in, and the lady in the above photo appeared at one stage in same outfit with a plate of nachos just to make it even more special!  Oh, and a great pint of Larkins, which I chose in case it was named after Hull's curmudgeonly poet.  And a cracking mix of people, 50/50 m/f split, all ages, races, like the 'TV'  had handpicked the clientele for some modern edgy drama.   Very lovely place, and on the way, my old/new friend shook my hand and we promised we'd meet again, don't know where, don't know when!  As if we ever had before......

Back down into the 'heart' of Deptford, and a stoned taxi driver was laughing to his mate cos someone had knocked his wing mirror off and it was lying smashed on the pavement.  I liked this place.  My next pub looked a bit cavernous and modern by comparison to the first, but as they say, where there's a hole (doorway) there's a goal (pub tick). 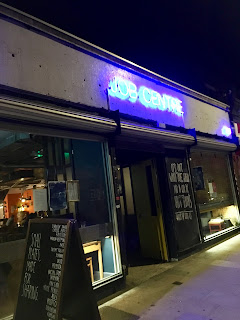 "No Mum, I'm not at the pub, I'm at the job centre hahahaha!"  FFS Antic, how basic do you think the kids of Deptford's sense of humours actually are?  Well, first impressions weren't great here as I was hit by the heady intoxication of man sweat and meat.  A couple of nerdy hipsters who'd taken advantage of my above photo opportunity to get into the pub before me then hesitated a few feet from the bar like they didn't quite know what to do next, so I pushed past them, saw the word 'Volden' and knew I was in an Antic pub.  Unlike Mirth, Marvel & Maud and Leyton Technical, this was of the 'exposed pipes and ducts' kind, more like a Pret a Manger with a better attitude to allergens.  And I was less of a fan.  The lighting was dreadful, bright blinding lights in places, pitch black in others, at the bar for example where I gave the perfect case study for why 'paying by card in a pub is preferable to cash'.  I fucked around with 10 and 20 pences in the gloom for ages to give her the £4.10, keeping everyone waiting, and STILL got it wrong, mistaking a 1p for a 20p.  Rubbish Simon!   To add insult to injury, nerdy couple swooped back in from behind me, swiped a card, and were off with their drinks before me!  As I sat at an uncomfy high bench and silently judged all whilst sneering at the weird decor, I made my Antic bingo card so at least that amused me.  But I must say my pint, Volden's Autumn edition, was very good indeed so there was to be no 'full house' from me. 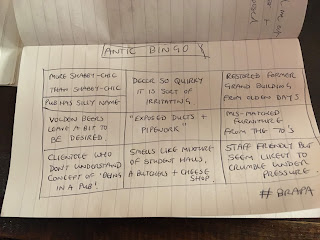 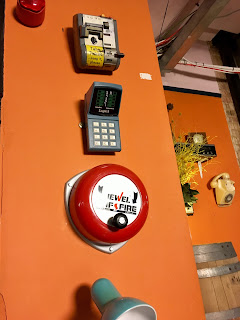 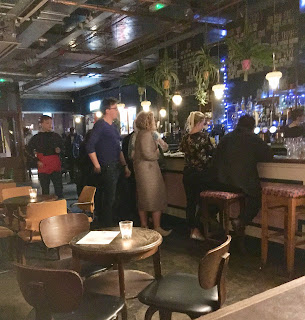 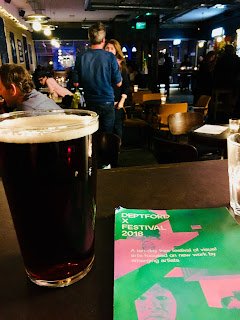 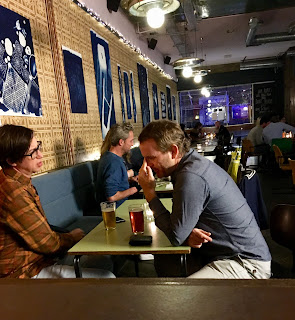 The next closest pub was not actually a Deptford or a Greenwich one, but in a place called New Cross as in the song "The Only Living Boy in New Cross".  Carter USM, yesssssssssss! 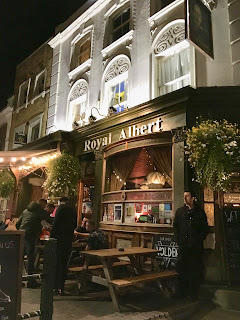 Hard to believe this could be an Antic pub too (illustrating the two distinctive styles they offer), but the Volden pump hit me square on as I entered this busy joyful youthful Friday night hive, there was even a very unnecessary bouncer hovering outside looking at nobody as they walked in.  Most notable, as I ordered whatever ale I could see without a V in it, there was a young lady propping up the bar alone.  I immediately thought "social experiment to see who approaches her and then put it all over social media in hope it goes viral".  Well, I'm not playing your game missy!  So instead, I squashed right in between two tables facing the bar in case drama unfurled.  But on seeing GBG, highlighter and notepad, two friendly young gents called Fred and Nick asked what my game was.  Well, they were tickled by the BRAPA concept and had an encyclopedic knowledge of local pubs which helped.  "So what have you observed in here?" they asked, so I told them about Miss Social Experiment, and they agreed it looked like that, though turned out she did have a boyfriend somewhere in the pub, he'd just gone for a really big poo.  And he returned right on queue.  Poetry.  Was this really an Antic?  Well yes, I think it had a maypole in the middle (not on the bingo card!)  It couldn't have been much more different to the Job Centre.  But much more enjoyable.  Nick did the honours highlighting, Fred was a dark horse and seemed to be barred from most places, or refused to go in 'Spoons, something to do with Brexit.  "Right, we're off outside to smoke this thing!" they declared, so said our farewells and left.  Great lads, great pub this one. 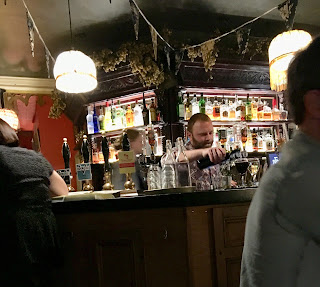 Funny what you hear about pubs before you go, isn't it?  When I told Fred and Nick I was off to my next pub, Nick suggested joining me.  But Fred shot him down "no, I went and it is shit!"  So that was that.  And in my Twitter Pub Tickers Group Chat, the always diplomatic Duncan Mackay commented "well, it is a nice building".  So all in all, my hopes weren't too high. 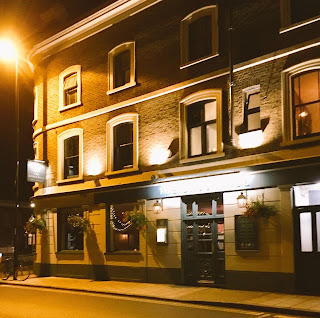 Fred had it right.  Time might well have been ticking on towards last orders, but that didn't stop this place trying to be as unpubby as is probably possible in a place as great as Deptford.  It smelt of food, my Wandle ale was cloudy and below par, £4.40 a pint was the most I'd paid all night, a baby was seated in a special high chair wheeled out by some simpering clone girl, bring back the Antics please!  To my right, Great Uncle Bulgaria did a crossword.  To my left on a high stool, a couple watched funny videos of cats on YouTube and HOWLED with laughter, NON STOP!  No wonder G.U.B. moved, though I suspect Orinoco had found a piece of litter which needed picking up.  I went for an unsatisfactory piss.  But then I noticed, Duncan was right too, this was actually a nice building. 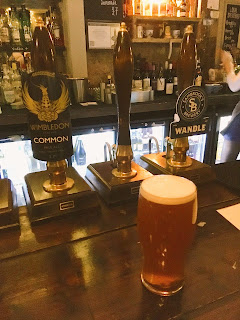 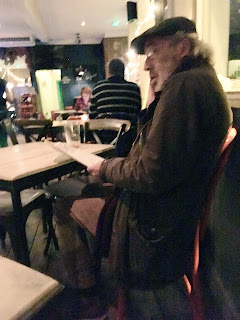 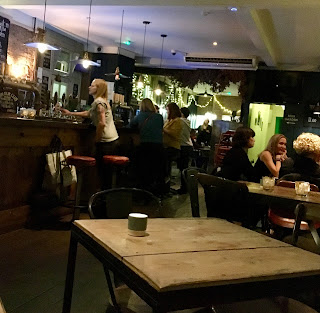 Time to squeeze in a final pub of the night then, which took me from SE8 to SE4, a place called Brockley which no one has ever heard of (the Dukinfield of London if you like) and a couple of people had told me this was quite a good one, so I was quietly optimistic. 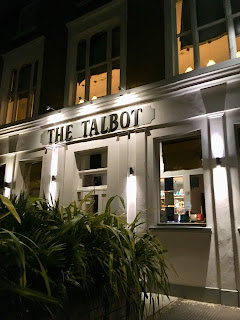 So perhaps a little more modern and posh than I'd been hoping, but at least it felt something like a backstreet boozer, something you could never accuse the Brookmill of.  After a York Beer Festival choc-a-bloc with Mango flavoured beers (a good year for Mangos?  Or just cheap?), I saw one here by Ilkley so I got one as I'd managed to avoid them on the night as I was now drunkenly sentimental enough to be thinking Yorkshire thoughts!  In fact, so many ales were Yorkshire, and so many men wore flatcaps and long coats, you could've been forgiven for thinking you were in G.O.C.  But then again, a trip to the loos (and I mean a trip, I half fell off the stool and my left knee buckled, more on that later!) saw the gents were "Sweets" and the ladies were "Darlings".  A Dad tried to amuse his twin tweenage daughters with funny stories sadly lost in the mists of time, everyone who walked in seemed to think they were walking onto stage in some stage play and had to 'announce' their presence, which got quite wearing.  I think the problem was, everyone was somehow more drunk than me.  And that can be annoying.  But a pub with promise.  Third best tonight, and you can't say fairer than that. 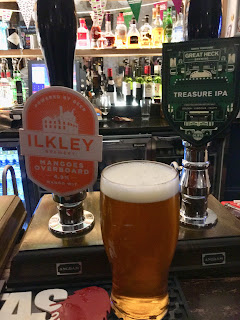 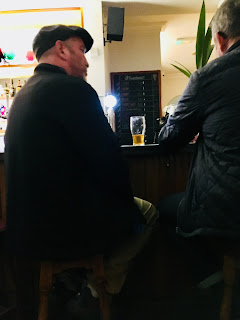 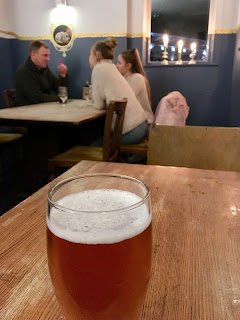 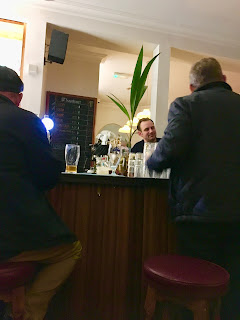 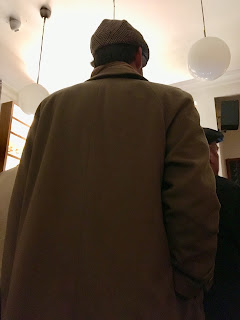 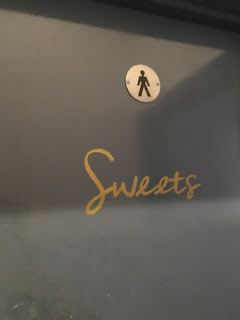 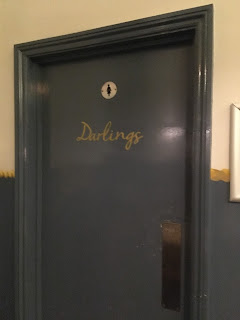 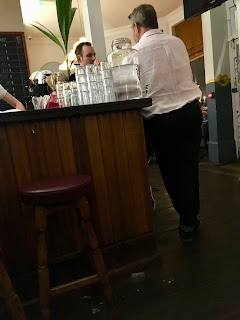 So back to the Travelodge, as I was looking to get a good early start tomorrow if I was to get the six pubs in, as my train back to York was about 4pm.  Join me tomorrow night for more tales on that, hope you are coping with these daily blogs but I've got to catch up somehow!