I was up early on the Thursday morning (11th Oct), with the intention of getting myself right across to furthest point west in the county, Lyme Regis, where the pubs open early like all seafront places seem to.

But I soon changed my mind (again) when I noticed one of my rural ticks with no train, no bus, had the opening hours of 12-2 and 6:30-11.   Now or never if I was to do it this holiday.  So I hopped off the bus at a place called Morecombelake, crossed a scary road, and walked 20-25 mins to a village called Whitchurch Canonicorum.

It was 11:50am when I reached the pub, but was horrified / saddened / slightly miffed to see this: 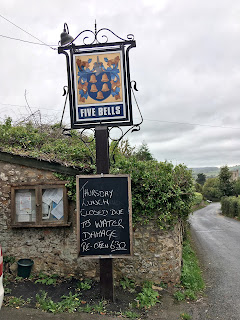 Ah, that famous water damage problem that blights pubs til 2pm but definitely dries out for 6:30pm!

An old dear trying to walk a dog which wanted to be indoors saw me hovering, just as the rain started to fall, and asked what my game was.  Well, she tried to be diplomatic about the pub, to which I asked "are you trying to say they're a bit lazy when it comes to opening hours?" and she said "you haven't heard it from me!"  She told me they sell Palmers beers which her hubbie hates, and that she once ran the 'best pub in Kent'.  I liked her.

"I'll try ringing them and see if I can just come in for a pint" I decide, but I could hear the pub phone ringing out.  "She's gone shopping with her daughter,  I saw them leave earlier, you're wasting your time" she told me, village life eh, nothing is sacred.  So that was that, I sloped back to the bus stop and got myself to Lyme Regis wishing I'd stuck to my original plan! 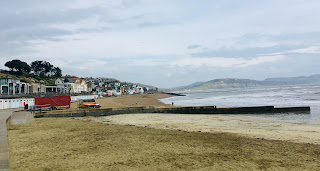 Still, some nice views and bracing sea air and I was more than ready for my pint when I finally arrived at the seafront pub.  It was probably 1pm or something late by now! 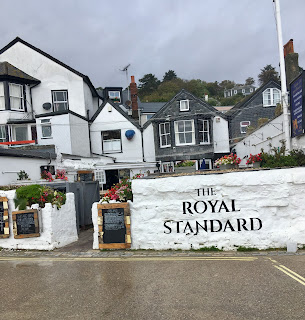 So I walked in through, what seemed like the back garden, where netting hung across the whole thing which might've been to stop those pesky seagulls swooping down on all that yummy Palmers beer.  Or so I assume.  Yes, it was Palmers heavy, a pool table, tiny yappy dogs everywhere, crying twild life in buggies being tending to by lumberng big bosomed Mums (all at the far end of the building I was glad to see) whilst old blokes with fisherman hats on made bawdy comments and lauged raucously.  You could imagine Beryl Cook's ghost having a field day in here.  Always have felt seafront pubs are a bit shit, but at least this one had a bit of life to it, and the Palmers was on decent form.   "Arrrrghhhh, I'm going to have to leave, I'm skint!" said a twenty something bloke.  He paused, expecting someone to offer to buy him a drink, but instead, they all said "oh never mind, bye".  A couple of the old dudes, who had an element of Portland about them, murmured something to me about my Good Beer Guide which I think was funny, but I couldn't tell what they said cos it was just a lot of vowels, so time to move on. 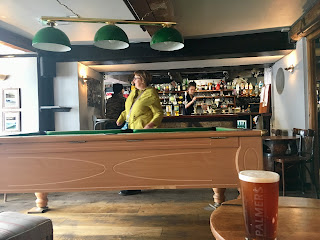 Back along the prom, and into town, was the other GBG entry, a small little place which had quite a temporary air to it ....... 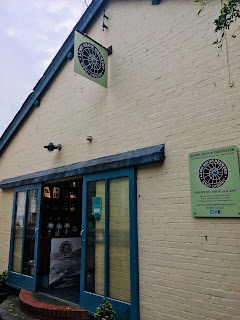 Not sure my whole body actually got inside the whole building here, so hope I'm allowed to count it as a pub 'tick'.  Nice to see some ales that weren't Palmers for a change, though had the nice lady who served me looked a little bit less serious, I may've joked "these are just Palmers rebadged aren't they LOLZ?" but get the feeling she may not have appreciated it.  Besides, she had her hands full with a group of lively walker types who'd secreted themselves in all corners of this tiny building, and some of these microbrewers do have a tendency to take themselves a bit seriously at times like they forget they aren't Glastonbury headliners or A-list film stars but am sure that wasn't true here!  I'd been served in polycarbonate, so felt obliged to sit in the little courtyard where there was a pottery, cafe and a couple of other twee bullshit places.  Tourists kept wandering into the space, looking like there should be something exciting to see, realising there wasn't, and moving on.  Few times after the walkers left, I thought about going to talk to the lady, but she looked a bit stern and the only time we interacted was when I asked where the pissers were and she sent me across the way.  Beer was quite nice, and a poor man kept staring longingly at my pint cos his wife had made him get a coffee.  It made me think of my own parents, so I rang my Mum in lieu of any pub excitement and had a nice chat! 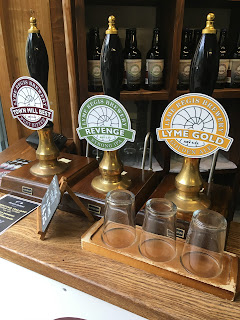 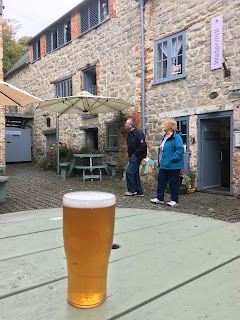 Charmouth would've probably been walkable under other circumstances (nice weather, a better knee) but I found a bus stop going up a narrow street and hopped on for the short ride.  The street was very steep, but the pub seemed good old fashioned and sturdy so time to give it a try ...... 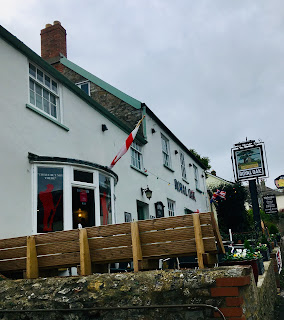 Really friendly locals feel to this place, with the St George's flag and poppy tributes, I had a feeling it was going to be a bit more down to earth than Lyme Regis before I got inside, which I guess is more of a tourist spot.  This is right on the coast too, but you'd never know, you could've been in Brum!   I was 'Palmers' focused again, but you know how I like ticking things of a list, right?  Well it was becoming apparent I could get through the full range (plus seasonal guests) this week if I played my cards right, and working my way up in strength.  Only two to go!  As I was analysing the ales carefully, a local took it upon himself to give me a run down of each ones characteristics.  So I got the 200, and he was basically told by the others to stop being a show off.  At which point, a rogue Dorsetian (Dork?  blame Martin Taylor for coining that one) squeezed in behind me, did a similar analysis of the options available to him, and ordered a pint of San Miguel (pronounced Miguwelllll, rather brilliantly).  And I didn't know whether to laugh or feel cheated!   I sat by the window, nursed my 200 (cracking pint), tried not to get too freaked out by the picture of all the locals at the beach a few decades back, and in an understated way, I think this was probably my favourite pub of the day. 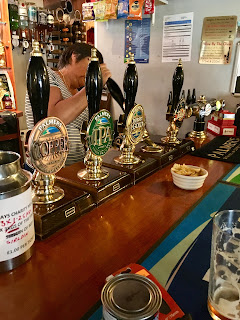 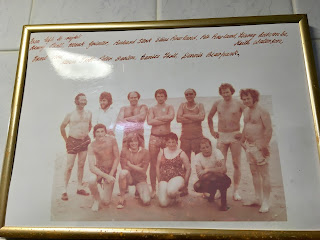 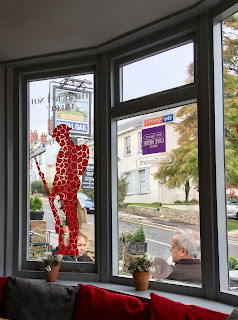 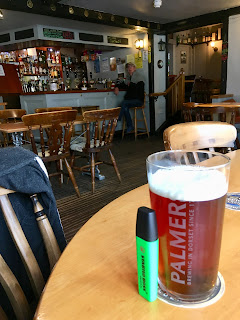 Still, three pubs to go if I was to get my full six allocation in I craved, and I had to run for the bus.  Little did I know it'd be full of schoolkids.  More on that next time ......