It had been an incredibly gruelling Wednesday on Project Calypso, I'd worked 10 hours, and I was sure not going to let tiredness get in the way of BRAPA.  Cathie needed wine, so we did the most logical thing and stayed on the Northern line, where our new Angel home is, this time going north to Kentish Town.

I'd always kind of paired Kentish with Camden, so after last week's fairly crap Camden experience, I was keeping my expectations low.  Having said that, I'd been to some good pubs here pre-BRAPA.  I thought the Tapping the Admiral was fantastic, the Pineapple above average, and the Southampton was quite good too in a slightly more annoying way. 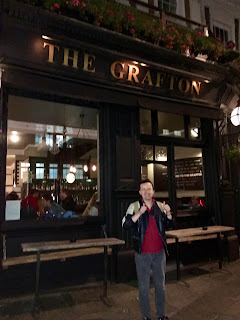 With the project stress levels ramped up this week, Cathie was under instructions from the boss man to put our drinks on the bank tab as well as our food, so 'whoop whoop poop-a-scoop' as the youth of today (like me) probably say.  Service was typical of London (three minutes slower than the rest of the UK .... apart from Dorset but I'll get to that) which gave me time to 'admire' the now fairly common London bar sight of 'free jug of water' and 'glasses' like you're at a gig.  And Southerners wonder why Northerners consider them soft?  Well let's just say I've never seen a jug of water in a Stalybridge real ale pub (and if I did, I wouldn't touch it for fear of Cholera but that is beside the point).  This was the poshest one yet, with sliced cucumber in it!  I joked it was 'green eels' just as the barmaid came into ear shot, so she thought I was being deadly serious so I had to follow through on it which made me look like a simpleton.  A jovial 'character' overheard Cathie asking for the receipt so we could claim expenses, and he asked if he could have a drink on our tab so she laughed in his face.  We got sat in the bowels of the pub after I'd guzzled down two small glasses of eel juice, quite a warming soothing deep brown, green and red atmosphere, though you fear the famed Victorian features have been diluted by the 'contemporary' ones somewhat.  There was an empty cage which should've contained a weird pub creature, but apart from that, there wasn't much interesting going on.  I got a Purity ale which was ranked B on the Si Ale Scale which means above average.


On the way to the next pub, at the traffic lights, I saw a sign which I'm not sure I whole hearterdly concurred with from my BRAPA past: 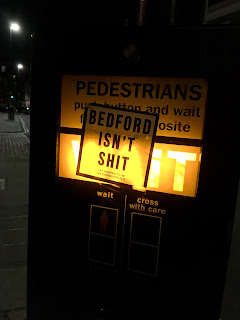 Cathie asked if she was becoming the top BRAPA guest apart from my Dad?  Well, I confessed Tom Irvin was easily ahead of her too, told her she was now in 3rd place, but now I think about it, she's actually about 14th but don't tell her that!

Our next pub was surprisingly down a leafy side street, with loads of posh houses one of which happened to be a pub.  This is my fave type of pub location, but everything was so grand, it wasn't quite Foresters Arms, Reading or Wellington, York in the pub 'romance' stakes.

Brighter, airier and full of bald egg men cracking jokes (cracking yolks? sorry), Cathie spied Doom Bar and said "oooh, I know that's a good one!" so a good job she isn't on beer twitter or she'd have been lynched by now!  Out of deference, I ordered it, something about putting a Doom Bar on YB expenses that felt wholly liberating.  More controversially than the time BritainBeerMat said he didn't think Ember Inns were that bad, I think that apart from a slight sweetness, I actually quite like Doom Bar when well kept.   You best block me now!  Cathie preferred this pub to the first one, but a little bit overly smart gastro for me, upstairs theatre for added London bingo card points, lots of clipboard menus, you know the kind!  One of the bald blokes got overly excited about wet concrete so I told a very depressing story about a wet concrete incident on a stag do.   Everyone who wasn't bald wore scarves and said 'yah' and someone even mentioned skiing in France at one point yet it still had a pleasing  'community' feel about it, which was 'totally adorbs', as they say around here.

Whilst on the Tube earlier, I'd noticed 'Highgate' was just a couple of stops north on the same line, and I needed a tick there, so despite the lateness of the hour, I told Cathie I was off to tackle it.  To my surprise, she said she'd come with (though it later transpired she was just worried about getting lost trying to get back to Angel!)

It was a further walk than I'd anticipated, and uphill, I always expect Tube stations to be right slap bang in the middle of a place, but not sure that is the case here.  Been to a 'Spoons here once before, but can't remember much about Highgate.  The pub FINALLY appeared out of the gloom.

A quite long thin pub, surprisingly busy at this time, especially when trying to squeeze in and out of the bogs.  Definitely the most 'real' pub we'd been to tonight, even had their own beermats (one of which I took as a 'souvenir' but accidentally left in a Northants pub on Saturday, also called Duke!)  Got a very good Magic Rock pint cos you can't go wrong with them, no Doom Bar of course, haha (am I even joking, I don't know) and I honestly can't remember anything weird happening which is wrong itself but at least it means I can finish this blog and go to bed.  Hurray! 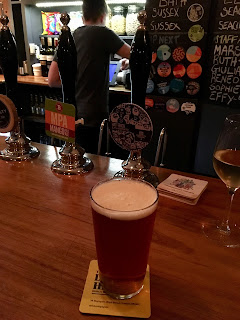 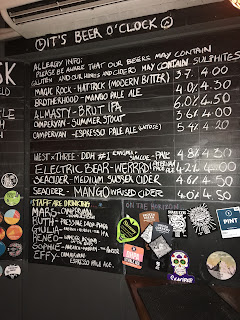 So three more ticked off, the London adventure was coming to an end, but I'd be back tomorrow for three even posher ticks.