I requested that work send me back to London on the Tuesday evening, that way, I could get settled back in at the Doubletree at Highbury & Islington, and more importantly, a bonus evening of BRAPA ticking.  But best laid plans of course, can go awry.

The omens were bad from the offset when I sat in my actual reserved seat (something I rarely do) and had to 'enjoy' my Burger King Cheeseburger meal next to the angriest woman in L**ds (and that is saying something) who, when she couldn't connect to WiFi, slammed her laptop around like she was battering her husband, and then phoned a mousy man so she could shout angrily and tell him how rubbish he was.

I checked in, with the hope of going somewhere for a peaceful 3 or 4 pub evening (Homerton?), but then I got an urgent text from project leader and new BRAPA legend Cathie to say things had taken a turn for the worse on Project Calypso and they were working til 20:30 and could I come and meet them to hear all & debrief?!

I found them at All Bar One in Leicester Square, so I knew they weren't thinking clearly,  no cask ale so I paid £5.55 for a pint of some Camden Pilsner which was quite nice considering, but I can't see this place getting in the GBG anytime soon! 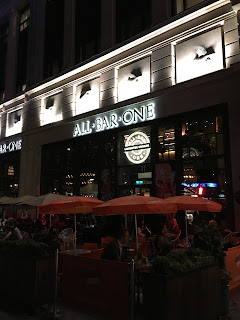 Cathie was there with my colleague Matt (Bradford City fan with a dog called Princess!) and a bunch of crazed Scots.  These included the lovely Zoe (who gave me an Edinburgh hug on arrival, a bit like a Glasgow kiss), Shona of Falkirk porridge fame, a cool bloke who's in a band called John and a woman called Jenny who I only know cos she's the only one who asks questions in Lord Rachel's Q&A sessions.  Why I decided to start asking them about Brexit and Scottish Independence may've been down to nerves, but it wasn't the wisest topic I've ever brought up, according to Matt!

Us L**ds lot (me, Matt and Cathie) broke away from the Scottish crowd who went in search of food and lego, heroin and offal, shortbread and haggis, and whatever else Scottish people do, so I got us on a Northern line going south though it was gone 10pm by now, BRAPA still wouldn't be denied!

Our first pub looked like a cross between an 80's Chinese Buffet and an American motel, but I convinced them both it was a worthy 'tick', though bouncers outside never make you feel relaxed.

So we walked in and I looked up and saw exposed pipes and ducts and my Antic senses were tingling.  It was dark, dingy, full of young loud drunkards and pretty much made the Job Centre in Deptford look like the Royal Oak in Delph!  Kind of.  As we approached the bar and I volunteered to take the reins (I felt bad for a frazzled Matt n Cathie to bring them to a place like this after the day they'd obviously had!) I tried to see what guest ales were on other than Beer That Cannot Be Named  (Voldenmort .... haha, hope you like that one!  groan) but a pissed young lady was dancing crazily at the bar and in my attempts to duck n weave, she thought I was dancing up against her so started gyrating against me!  Cathie thought it was hilarious, as she had to step in and buy the round cos I was too traumatised as I found a seat.  The girl 'made friends' with an equally drunk Geordie in hi-vis (sob, couldda been me!) so I vaguely watched her table dancing with much amusement as Cathie & Matt tried to scream Calypso info at me over the banging tunes!  What a doss house, and I don't mean in a good way.


One stop down the line was a place called Kennington, as in the Kennington Oval which is a cricket ground.  Cricket is a sport which I loved between 1990-1997.  I've gone off it now but Somerset are my team because they had some amazingly talented players when I loved them.  Yet I've never been to Taunton!  They always finish second in everything, never first.

That's not important, it was gone 11pm so one of the two GBG pubs was closed but another said it was still open til midnight so hurrah, let's get it on!

I'd seen for years now that this is Oakham's only London pub, or something.  Oakham consistently for me for a good few years, one of the absolute best, so I should've been excited here.  Maybe that was the problem, it wasn't exactly the Barton Arms near Aston Villa's ground, one of those pubs which probably shaped why I felt passionately enough to start BRAPA.  The staff were very much in that 'we're still open, we don't really want to be, but we'll serve you'.  They even said "but you can't take your drinks outside".  Errrm, to where exactly, drinking on a main road at 11:30pm in London on a Tuesday night wasn't really in our thoughts!  It even felt a bit geared up for dining, even at this late hour, as we took our Oakham ales (and wine in Cathie's case) to the left side of the pub and enjoyed a much more relaxed (i.e. dead) drinking experience to unwind and work out a strategy for our early start tomorrow!  More of a necessary pub experience than a great one, but better than the E&C!   And good to get the first two October ticks under my belt. 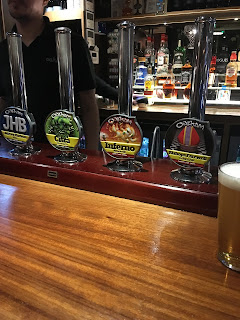 'Twas after 1am when I finally got to bed, had to be up at 6 for early start, but that wouldn't mean BRAPA was denied on the Wednesday evening either.  For more on that, join me tomorrow.