Apologies for this bombardment.  Even the Rt. Hon. Martin Taylor doesn't give you THREE blogs in one evening.  I don't think.  I just need to be 'playing catch up' as a wise man once said, so I have a fresh mind before my epic BRAPA holiday begins tomorrow.

If completing Essex doesn't kill me, then County Durham certainly may.  8 pubs left at the start of play on Saturday 19th June, dotted around all over the place, thank goodness for the kind chauffeuring skills of Daddy BRAPA.

The roads were wild, wicked and winding.  The sheep looked mean.  But we were on track for noon opening as we passed the Derwent Reservoir. 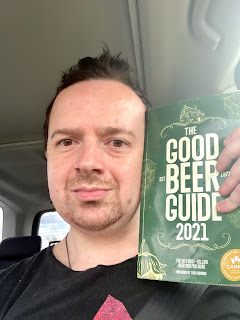 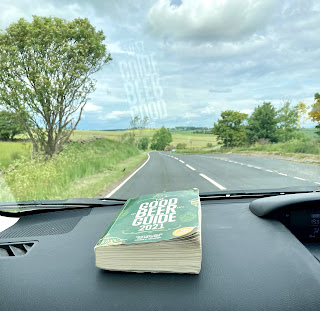 There can't be too many prettier villages than Blanchland, surely? 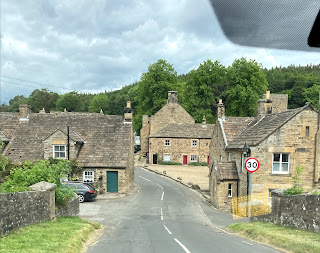 Folk seemed to agree, the car park was chock a block.  A few stragglers lurked on benches outside the pub waiting for noon opening.  But they vanished as soon as me and Colin stepped up for the official BRAPA photo (funny how often that happens!)

Lord Crewe Arms, Blanchland (1804 / 3233) was a pub worthy of the village, and as I tentatively pushed the door at 11:57am, a women on a reception desk who looked like a Marie showed us through to these stunning outdoor grounds (I'd call it a beer garden but it was sort of beyond that).  Felt a bit like drinking at a French castle.  A nice jug of Twice Brewed bitter reminded me I wasn't.  There's a wedding pre-amble going on, just like last week at Roydon, hope this isn't gonna be a theme all summer.  Indoors is similarly stunning.  "Wow, beautiful pub!" I say stepping up to take photo of bar.  "Cheers mate appreciate it!" says barman.  Errrm, I was complimenting the pub, ACTUALLY! 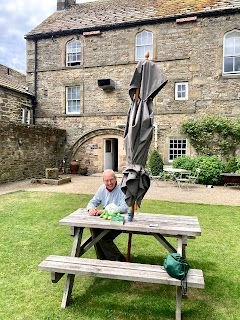 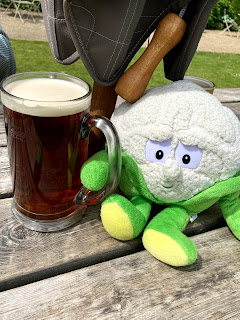 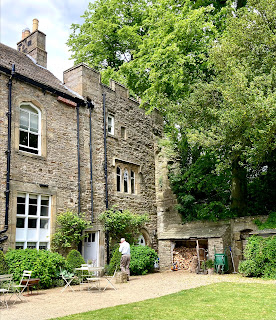 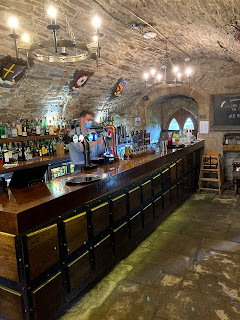 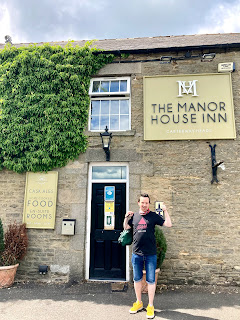 Manor House Inn, Carterway Heads (1805 / 3234) was the only slightly weak pub of the day, a fairly average roadhouse with no discernible character.  A Fake Eddie Fogden (FEF) said 'alreet' on entrance, the staff were a little bit jumpy and I think, a bit eavesdroppy, possibly suspecting we were the locals CAMRAS here to strike them down!  After all, I had a GBG on the table, and we discussed at length how Wainwright (the only beer on) has declined over the years.  Not kept badly. just a poor beer these days.  Watery.  FEF failed to wash his hands after a wee, hope the real one (REF) does when I meet him Sun/Mon in Essex pubs!   Tim Taylor Landlord was just going on as we left, bet it was great, typical!

We'd already passed this next pub twice, but my excitement was building, as this was perhaps my hardest of the eight remaining Durham ticks I needed ..... 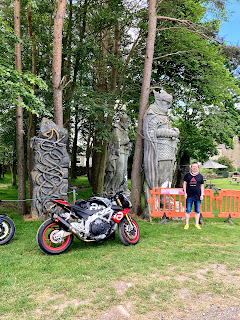 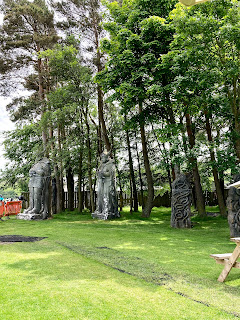 In the absence of a pub frontage (or pub indoors) at the highly unique Baa, Edmundbyers (1806 / 3235) , note the statues which I think Dad was hoping were some ancient 10th century mystery, but when I asked, she tells me they've got them from the ITV series Beowulf which was filmed nearby.  We loved them anyway!  The garden was undulating, most benches were taken, some people ate pizzas from a van on outdoor settees, the Sandpiper from Cullercoats was a fabulous drop, and an old local called Brian lolloped around from table to table, so much like that "this week, I've been mostly eating...." guy off the Fast Show.  Enjoyable place this, a real return to form! 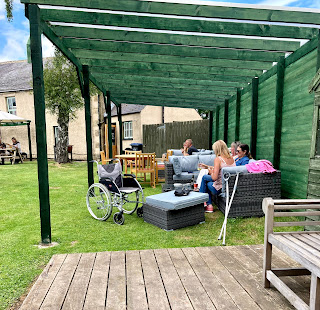 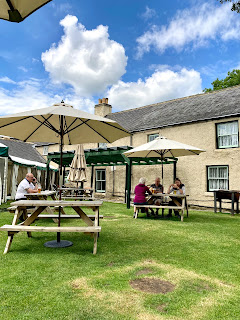 Now the day was really hotting up, and my enforced full week of detox / sobriety was really paying dividends as I was drinking my pints quick, and felt incredibly sober still!   Two key Durham pubs awaited ...... 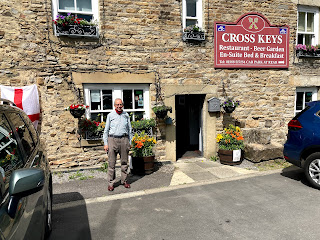 For all the lovely breath-taking scenery and fresh air, nothing beats being a good solid GBG regular and Cross Keys, Eastgate (1807 / 3236) was a fine reminder of why Durham is the Essex of the North in pub terms, and I'd fight anyone who disagrees!  Peas in a pod.  You had to knock, then stand back.  Luckily, our spirited 21 year old barmaid heard our murmurings outside so opened the door anyway.  I never trust these things.  She'd just had her Covid jab, and proudly tells us she specifically asked for it to be in her 'non pint pulling arm' as she didn't want to stop working.  You wouldn't get this level of staff genius in Loughton's Victoria Tavern.  I'm not bitter.  But my pint of Allen Dale (not Jim from Neighbours) was, beer of the day, sparkling.  A southern dude is next to knock.  "I'm looking for Gaynor" he asks in a jarring southern accent.  "Can you ask her if I'm okay to park in front of her house?"  Dad and I silently snort our disapproval.  I love hating random strangers for the mildest of things.  Great pub experience. 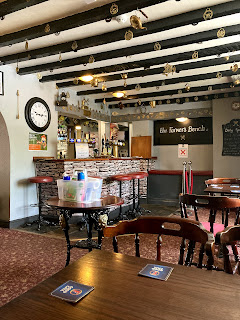 And a couple of miles away, our fifth pub of the day had recently opened at 3pm.  What great time we were making. 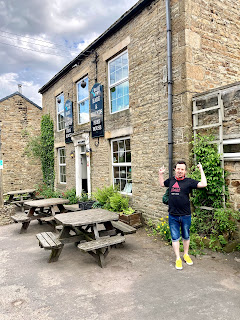 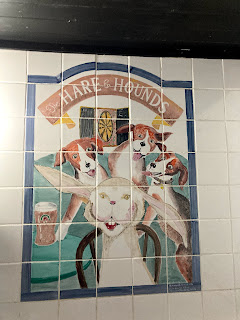 Being fifth pub of the day, I cannot tell you a great deal about Hare & Hounds, Westgate (1808 / 3237) but 'contemporary sources' could put an argument forward for it being even more splendid than the Cross Keys.  How is this possible?  It certainly felt even more local / low key.  They had their own ales on, somewhere called Wear'd Ale and I had a Dark Nights, a delightfully dark meal in a glass type affair.  Plenty of people did arrive eventually, so don't let my phots deceive you, it is just I took them first so I wouldn't forget!  Our favourite customer was a rather breathless man with the chin of Peter Beardsley who'd been on an epic walk to get here.  I can't remember all he told us, but if I had regression therapy, I'd enjoy the route he'd taken and our chat all over again.  Dad tried to get a coffee to keep himself sober, but because barmaid was on her own, it wasn't an option.  Am sure J20 was. Never mind, it didn't detract from a top pub. 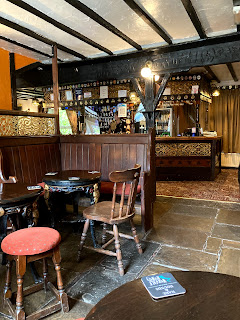 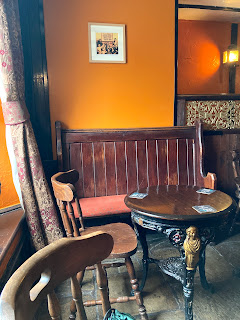 As we were continuing to do so well for time, Dad indicated he'd be happy to give Red Lion, Cotherstone a go too.  Oh gosh, I was so delighted.  I hadn't wanted to push my luck suggesting this as well, this tricky one sticking out on its own past Barnard Castle would be a great one to get done.
But my joy soon turned to despair when we realised it wasn't open! At 5pm on a Saturday!
A look at their Facebook the next day indicated the pub wasn't open at all, so am guessing the hours I saw are temporary ones for villagers only? 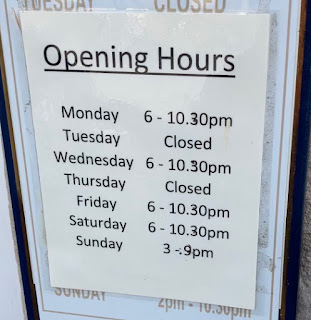 It might be a case of 'watch this space' (i.e. social media) but Dad did say we could come back on a Sun afternoon if the Hull City calendar allows us a Sunday day out instead of the Saturday at some point, not that we are really even following the Hull City calendar this year!
Seeing I was reeling from this bad news, he kindly agreed to stop at a North Yorkshire pub on the way back to soften the blow.  This was it. 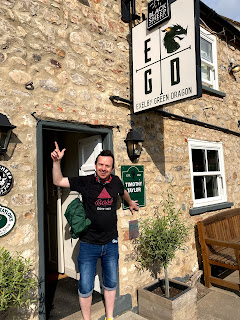 Exelby Green Dragon, Exelby (1809 / 3238) put me very much in mind of our Half Moon, Newton on Derwent trip a fortnight ago.  I was at a similar state of drunkenness.  Friendly staff encouraged us out at the front in the sun.  It was fairly sleepy, though a few more cars.  No one from New Zealand popped up.  And then Dad had a great idea of getting strawberries, ice cream and coffee to finish off the day / sober me up.  Legendary idea, and we had to go inside for this, so got to witness the pub indoors too and its various nooks and crannies.  Was nice, they had a special award for how well they'd kept their Tim Taylor Landlord which was a shame cos I'd gone for a pint of Falconer, whatever that is,  twas good though.  Perfick end to what I'd describe as the perfick BRAPA car day, I've not been able to stop raving about it all week.  Cheers Da'! 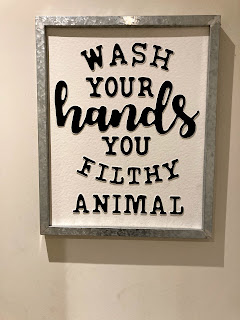 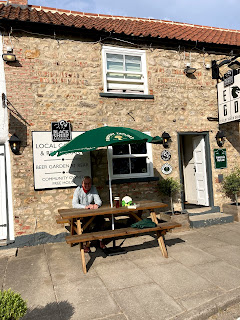 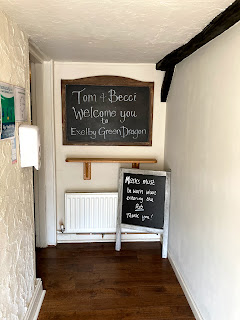 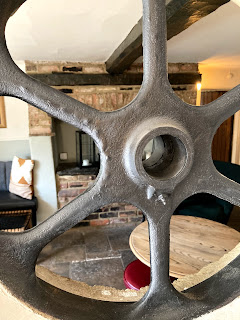 And there we have it, caught up, just before midnight.  Had my coffee.  7 hours sleep if I'm not too excited at the prospect of weird Essexy stuff over the next week.
Si