Sorry for the lateness of the hour!  I've been ill.  It came on last Thursday when I switched from ale to red wine on a trip to L**ds wonderful Friends of Ham.  I thought I'd overdone it.  But by Saturday, I was still well below par in Essex, I couldn't manage a SIXTH pub, never mind my ESB in the Parcel Yard.  I fell UP three steps in St Pancras.  No one saw amazingly.  By the time I got back to York, it was hot n cold sweats, sensitive skin, and on Sunday, aching so much I could barely move.  Monday, I recovered a bit so just a few abdominal pains.  But last night, I only slept 2 hrs cos stomach cramps so bad.  Slept most of day, so totally awake now, sore and tender.  How weird!  Get your mini violins out for me please.

As sad as it was to leave the wonderful Harrow pub in Steep, about 3 winding miles further up the country lanes my current taxi driver dropped me off in the sleepy hamlet of Hawkley, perhaps the most rural spot on this ruralest of routes.

I wanted to keep this taxi driver, but he was off to Havant on a free transfer so I let him go with good grace, but not before trying to bribe him with a drink of his choosing if he'd stick around. 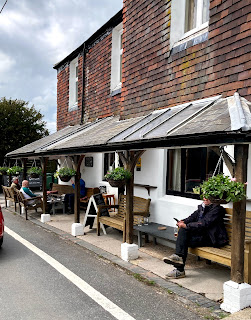 The gent with head obscured by hanging basket soon became my new best mate, as I sat on the bench next to him in the very impressive Hawkley Inn, Hawkley (1775 / 3204) .  A queueing system was in place, an army of staff were puffing and blowing, every table jampacked with lunchers, I think a nearby wedding was perhaps swelling numbers to an unusual level, but you could feel the quality of the place.  I tried not to glare too strongly at the loud posho claiming he was proud of his Yorkshire origins but would NEVER move back.  "Just a few degrees too cold!" he told his mates.  Tosser.   My beer, something light with a name like Pedigree from the nearby Flower Pot in Cheriton (a required BRAPA tick no less) was absolute nectar, probably my most enjoyable pint of the entire week.  As Mr Hanging Basket's real best mate arrived, it was so reassuring to talk to old blokes like this.  If they were written into a drama including a village pub in 2021, people would claim they were unrealistic caricatures, but they were just good honest country folk , enjoying the simple things in life, unfazed by the wider world.  They made my experience.  I asked them about a curious tale the taxi driver had alluded to that had made the national press last year.   The BRAPA lawyers (these two) tell me to proceed with the use of  'nothing was ever proven / allegedly'.  Seems a local farmer suspected the guv'nor of this great pub of carrying on with his missus.  So he dumped a tonne of manure right outside the pub entrance!  They point to exactly where it was - at my feet.  Worthy of a blue plaque, fact or fiction.  My main struggle was summoning my next taxi.  Especially with no phone signal.  The pub telephone was called for.  The poor staff had enough to worry with ole' Deidre on table 32 wondering where her Dover Sole had gone, without me causing problems, but I managed to get through to someone, but would take a while so I got another half.  Not the worst thing in the world, and what a fantastic pub, peaceful location, and great pair of chaps.  They recalled the day their mate who drank a little bit less than the rest drove them up to York for a pub tour using the 1978 Good Beer Guide.  They then did Exeter and Northampton in the same day, or something #PubMen 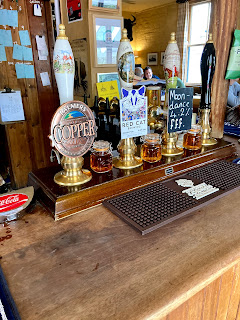 My latest taxi driver was the motivated type, wanting to strike up a deal where he charged me a 'small' standing fee, he gives me 30 mins in each pub, save me calling out and getting charged more.  I did the maths in my head (good job I work in a bank eh?), realised numbers are scarier and more boring than words, and just agreed.  Probably getting fleeced now but hey ho, I hate worrying where my next taxi is coming from.  And my knee.  Did I mention my knee?

Where there is an 'up' like my last two pubs, there is invariably a big come down.  It is just the BRAPA way.  The first sign that all was not well here (apart from one of the old dudes saying "Is that one even open still ooo arrrr?") was the pub sign itself, which seemed to have wandered off, unless it was just sky coloured? 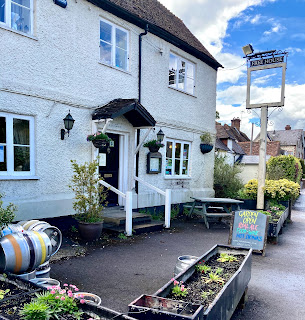 I entered through the fun sounding 'zig zag' bar, expecting a raucous scene like the annoying aliens off the Big Breakfast circa 1995.  After all, the past three pubs had been busy.  Not a soul in sight, not even a staff member.  Weird.  A musty damp smell permeated the room, like an outbuilding.  When a lady did appear, she was lovely, but gave off an aurora of a temporary housekeeper who'd been asked to pull the odd pint on the extreme off chance a customer appeared.  Wow, welcome to Selborne Arms, Selborne (1776 / 3205) .  Remnants of a good pub of not too long ago hung in the air, a cuddly stuffed lion intimidated Colin, and a small wicker basket selling Fry's Chocolate Creams suggested a top village local Beck Hole style.  A furious elderly man came in and demanded "where the 'ell is everyone?" to which she had no reply.  I almost told him I was here, but it wouldn't have been a consolation to him.  He stomps around a bit, I think looking for an outdoor area, then left without buying anything.  The country and western music seems kind of eerie in this atmosphere.   I'd ordered a pint of a strong novelty beer called 'Vacc to the Future'.  I thought 'if this is gonna be a terrible pub experience, I may as well do it in style!" and not only did it make my head swim, it was warm, clarty, and felt like it'd been sat there too long, no surprise with this level of custom!  "How woz it?" says my taxi man when my 30 mins is up, as the ££ clock up.  "Not the best!" I reply. Presumably, a once proud pub in the final death throes, or one waiting for an enterprising villager to buy it and inject new life into it. 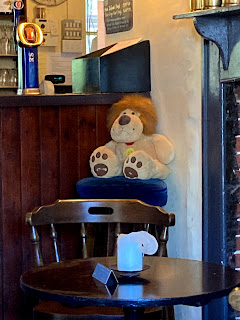 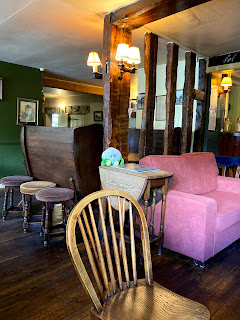 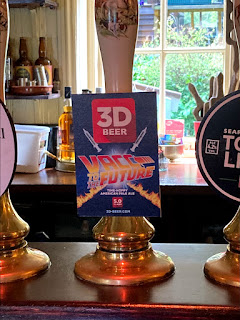 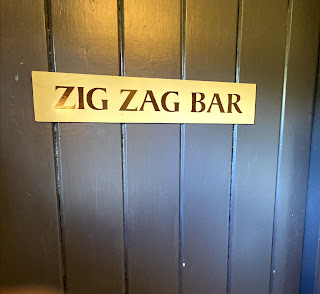 I offer him the chance to join me in the next one (maybe he'll buy me a pint?) but he says not, so am just hoping this one will recapture the spirit of Steep and Hawkley ...... 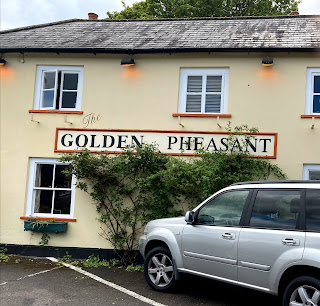 Relief on entry, not only laughing groups of middle aged hemp weaving village gigglers, but a larger than life landlord who sticks in my mind despite the dawning realisation that I was pissed.  Golden Pheasant, Lower Farringdon (1777 / 3206)  could, and probably should have been joyous as I admire the beautiful pheasant themed bar, and take my time over a fairly extensive beer range (no more novelty shite for me!)  He recommends me something malty and local that he is a big fan of, and it is great.  The problem is, as I wander off to find a seat, he bellows to me all enthusiastically "KEEP GOING RIGHT, STRAIGHT AHEAD THROUGH THE CORRIDOR, TIL YA GET OUTSIDE, THERE'S THIS LOVELY LITTLE COVERED OUTDOOR AREA!"  I try to tell him that I'd really rather just sit inside, but what with mask on, he can't see my lips moving let alone hear my voice!  So he persists, pointing his finger now, like I don't understand 'straight ahead'  I feel obliged, and nice as this little bit is, I'm totally alienated from the rest of the pub it is all rather very bloody boring after this.  Oh well, at least I could concentrate on keeping to my '30 mins' allotted drinking time now!  But what a shame as it really limited my experience.

"How woz it?" says taxi driver.  "Hmmm, better!"  I reply.  Such was the banter we had developed.

"I've changed my mind, can I go to Alton instead of Four Marks and leave me there, cos I can get a train back from there?"  "Harumph, suit yourself!"  he says.  What a bond we had.

More on Alton and a funny trip to Sheffield, tomorrow if I'm up to it!