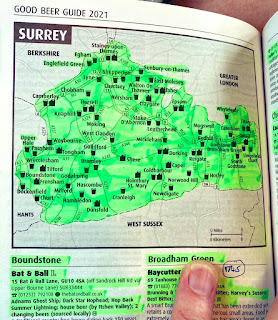 And so, here we were, early evening on Friday 21st May 2021, and it was a momentous moment (as moments so often are) as I shuffled through the not very mean streets of Chertsey, passing last year's very pleasant Olde Swan, dying for a wee, stone in shoe, blister on ankle, another one on my little toe, painful knee, but still smiling.

Now was the time I'd been working towards since July last year. 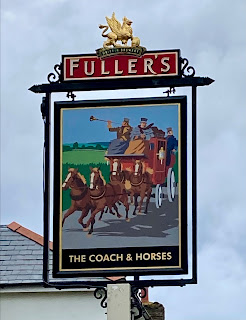 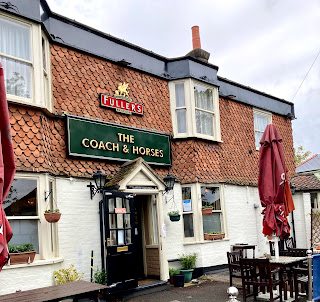 Coach & Horses, Chertsey (1772 / 3201) , 'The Final Countdown' was playing as I walked in, it just felt right, and as I sat down, it was the Beastie Boys.   "You gotta fight, for your right, to pub tickkkkk!" I sang angrily (but silently in my head so as not to scare the kind looking couple across the bench seating from me).  Colin stretched out, I considered champagne and a cigar, but being a Fullers pub, an ESB seemed highly appropriate in these circumstances.  My spirits were slightly dampened after first sip as it wasn't a great quality pint, not off, just lacking the punch of a Parcel Yard / Caterham example.  In the excitement, I spill some on my shorts taking a selfie.  Funnily enough, fellow pub ticker Jim (who doesn't boast about it on Twitter) had been messaging me through my hols, as we were in a similar part of the country.  Although we never quite met up, when I mentioned this place, he even said that questionable beer quality was a problem for him here.  The pub itself was my kind of place, cosy carpetted, benches, I tried to find the gents, walked into this delicious hidden snug.  That seemed to spark something in the kind looking couple, who then decided to book it for the weekend.  Problem is, 7 friends, only 6 allowed, so they spent the next 10 mins trying to work out who was gonna be the loner sat out in the garden!  Time to find the actual loo,  which made me walk straight through the centre of a bunch of rugged (for Surrey) locals, sat in a circle like they were doing a rather shit pagan ritual.  "Alrighttttt!" they said.  'Alrightttt!' say the staff on the way back.  Friendly place.

Saturday, my final full day in Surrey, dawned with the dawning realisation that with Surrey complete, I'd have to spread my wings (although in truth, you know I'd been planning this for a couple of days!)

I just couldn't be arsed with another trip up towards SW London.

Petersfield wasn't far on the train line from Guildford, and had a GBG pub.  That is in a county called Hampshire.  A place called Steep was just north and had one too.  And then, about 2.5 miles intervals north, there were additional pubs leading all the way up to Alton.  Knee was in absolute agony.

Here's some pub tickery advice.  NEVER trust ANY pub that says they open before 12 noon on ANY day of the week unless it is a Wetherspoons (or perhaps, a residential hotel but even then you are slightly risking it).  Even if WhatPub, Facebook, Twitter and pubs own website say earlier.

I stumble on a Wetherspoons just around the corner.  Saviour!  Pre-emptive half?  Oooh go on then. 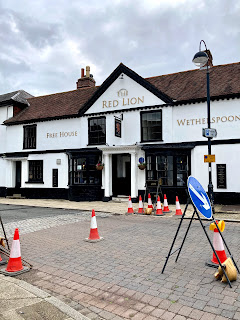 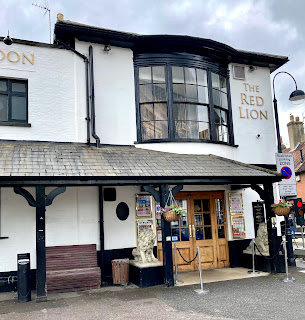 Red Lion, Petersfield and although it took me an age to get served, my half of whatever I ordered was on much better form than last night's ESB.  An old couple had held the door open, which immediately made it a better pub experience than its namesake in Barnes yesterday.  After that though, staff and clientele alike were of the zombie droog varietal.  Shame as the pub had plenty of character, not overwrought by perspex screens as is sometimes a 'Spoons problem during lockdown, the wooden panels and nooks and crannies put me in mind of Bodmin's 'Chapel Blah Blah Cornish Blah', without the chapel splendour.  And old bloke started complaining about his dodgy knees (you n me both mate), he was angry cos his mate had left him to balance a tray of coffees alone.  I read about Farnham pottery and Robert Baden Powell, but I was soon ready to leave, as I was scouting for pubs. 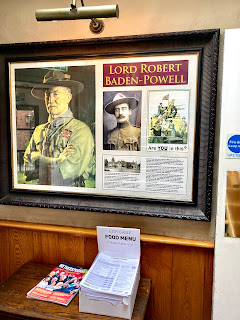 I sat on a bench directly opposite our required pub, after taking this photo: 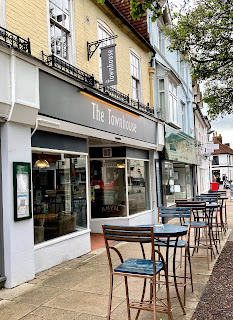 At 12:01pm, Townhouse, Petersfield (1773 / 3202)  sprang into life and I couldn't believe my eyes but TWO groups of oldies sprang out of nowhere like Spring Heeled Jack himself, and beat me inside!   Just behind me, a family with teenagers are now queueing.  Popular place.  I was sorted out (beerwise) by a mature lady who sees my book and suddenly asks "are you a beer guide addict?" she later asked (though it could've been 'arsehole', couldn't quite pick up the last word).   The beer (Citra Sonic) was a bit warm to be great, but the place really not my style.  Arsehole!  In fact, it had EXACTLY the kind of vibe of a place that SHOULD be opening at 10am for breakfast, I could just imagine poached eggs and smoked salmon on toast being whizzed through, past Colin's nose, to surrounding tables.  Alas, it never materialised, and whether there was some hidden upstairs, outdoors or conservatory, I'm not sure as every customer (and there'd been lots of them) just kept disappearing.  Sweeney Todd's perhaps?  I went there back in the day in Cambridge, and had a very meaty burger.  True story.  A reassuringly characterful cobweb in the gents was a nice nod to the Anchor Inn, Anchor, but otherwise it couldn't have been much further from it. 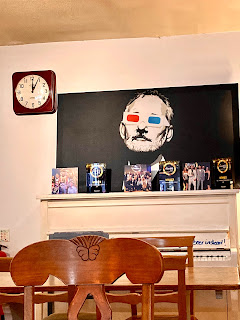 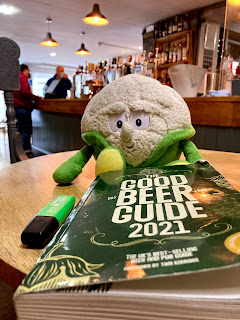 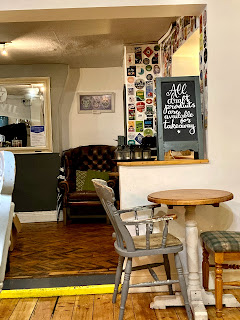 One more pub before I get back to Sweden v Spain.  'Oooh go on then!' (theme of this blog).

Knee was absolutely knack'd by now.  I felt like Syd Lawrence as I hobbled back up the wicket towards Petersfield station where I'd earlier spotted plenty of queuing taxis.

The pub looked easily walkable on a normal day, but my condition combined with the words 'steep' and 'harrow(ing)' had me petrified.

He dropped me on the main road so I had to walk one minute to the actual pub, cheers mate! Tsk. 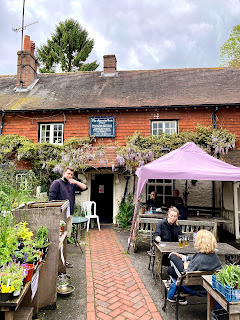 Mine host and the foreground mother and daughter combo smile and say hi as I step up, think I did a lame joke, enjoying their BRAPA five seconds of fame (probably), at this Grade II listed gem which they are not letting anyone inside of, and despite this not being my fault, I have made a mental note to revisit one day (2043?) when restrictions are over (though I bet some of you are sat there after tonight's announcement saying 'they'll still be going on then Si LOLZ!')  Harrow, Steep (1774 / 3203) was the venue, and our man of the moment asks me if I'm okay to sit on a table opposite the pub.  "Ho, ho, ah'll do exactly what I'm told pal!" I say, going all weirdly Yorkshire and garrulous.  I think I realised I was in a great setting, and despite the lack of indoors, the 'pub' performed as good as anywhere could.  The smell of smoky chimneys, market garden stuff (stay away Col!) for sale outside, the sun coming out, twittering birds in the trees, a delightful pint of Double Drop paid for in coins, and outdoor bogs I visited thrice (though one of those was for photos and inspection!) , I was truly content.  Especially when a taxi FINALLY agrees to take come for me!  A chirpy lady spies Colin and starts talking to him (always awkward, what accent DOES he have?  Tipton I always think).  A nice man in paint stained overalls likes the BRAPA idea, tells me to visit 'the pub with no name' nearby.  Not in the GBG mate, he is shocked. Taxi arrives, not my company, but it is sitting there ages.  Paint Stain asks on my behalf,  oh it is for me!  They have dual company names.  Hurrah!  Bye Mine Host, bye Colin Lady, bye Paint Stained Overalls, bye mother/daughter combo.  Onto Hawkley driver!  Cracking place.

And on that note, see you all tomorrow as I continue my drunken taxi tour through rural Hants.