BRAPA in .... EVERY SHEFF YOU TAKE, I'LL BE TICKING YOU

Back at peak lockdown in January, I was 'volunteered' by a new Scottish manager to write a monthly article for a new bank newsletter.  I was a bit miffed until my 'co-volunteeree' Dave, said in his best South Yorkshire drawl "ey up pal, why don't we use this to our advantage and do a 'beer tasting'?".

It was a strong idea, apart from the fact that all real ale tastes pretty much the same to me, and his favourite tipple is San Miguel, but our bank colleagues weren't to know that.

The first few were spent inevitably sampling a certain style together on Microsoft Teams - we did IPA, stouts, budget supermarket lagers even.  I'd write it up, Dave would cut down my word count (as regular readers of BRAPA can imagine!), add in a couple of added bits of humour, do the artwork, jobs a good 'un.

The feedback has been good.  We often get "it is the only bit worth reading" which is nice, considering we are buried on slide 17, right slap bang in the middle of nowhere.

But as soon as the May edition came around, we were ready for our ultimate 'plot twist', meet in an actual pub.  'And wouldn't be it great ....' I mused, 'if I could combine this with BRAPA ticks'.  Talk about killing two birds with one stone, those birds being a crow and a partridge. 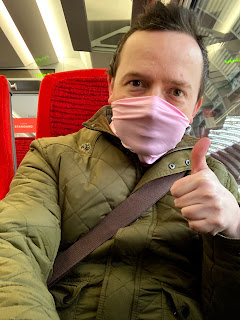 Four days after returning from Surrey (and not fully recovered), I hopped aboard the train after work to meet Dave in Sheffield.  So nice to see him in person for the first time since March 2020, weird to see him in 3D after so many Microsoft Teams calls.

The first pub was listed under Kelham Island, but whilst being in that direction, it felt more central than the others.  Maltmeister will probably tell you it is actually in North Derbyshire, having consulted Henry VIII's fishing rights map of 1538.  I'm not bitter, I'm just saying! 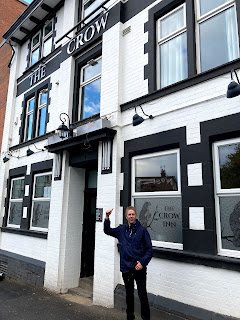 The Crow, Sheffield (1779 / 3208) was recommended to me as a pre-emptive just before the first lockdown hit, so I was not surprised to see it enter the 2021 GBG.  And as if Sheffield didn't have enough quality boozers, well, you can add this as being right up there with the best.  The traditional layout gave a multi-roomed effect, it was delightfully low key, you were kind of expecting the beer choice to be 'mild' or 'bitter' but then I was presented with this huge blackboard full of all sorts of crazy options you can view online.  But we just wanted a local pint of bitter (Dave had agreed he'd 'give the ale a go') so we went for Abbeydale Heathen, a very nice drop.  "Not got a lot of life has it?" murmurs Dave, unable to get San Miguelly bubbles out of his mind.  "Just the way I like 'em, totally lifeless!" I replied, which sounded a little bit necrophilliacy out of context.   You know when you see something out of the corner of your eye, and what you think you've seen isn't the truth?  Yeah?  Good!  Well, when we'd arrived in this side room, I was sure the lady by the door had her baby propped up on a buggy on a rucksack, and was speaking to it in a very matter of fact way, face to face.  'A modern parenting style?' I mused, but when she got onto stamp duty, I looked again, it was just a mobile phone, and she was obviously facetiming a friend.  Oh.  Shame.   It might be cos I've been into birds recently, but it upset me that the paintings on the walls weren't all of crows.  Not even crow family members.  Herons and all sorts.  Just a bird free for all.  Its the stuff like that which doesn't go unnoticed in BRAPA circles, no matter how many 10% stouts you put on.   Great pub though, much recommended. 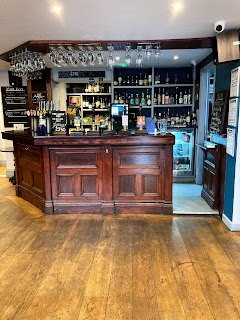 My other central tick left in the 2021 GBG was just a street or two away from here.  It didn't look quite as impressive from the outside, but it had potential ...... 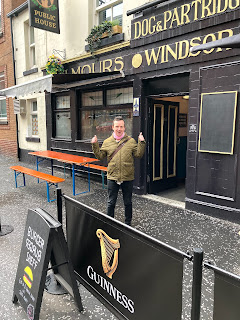 Dog & Partridge, Sheffield (1780 / 3209) felt like a pretty good boozer to be fair.  The only problem was, following the Crow, and in a city as pubby as Sheffield, everything just felt like a slight downgrade.  We ordered something called 'Demon Drink' cos the pump clip looked like a Victorian medicine label.  Of course!  I knew this back in 2011.  Doctor Morton's.  These are Abbeydale too.  Oh well, too late now.  'What do you think Dave?'  "Smoooooth!"  Right, there's the beer bit out of the way, now we can relax.  A trip to the loo suggested we'd have been far better off sat in the room to the back, it looked very traditional.  And it wasn't a small room.  But three elongated old blokes had stretched themselves out at such incredible angles, that somehow, there was absolutely nowhere to sit.  It didn't matter, our host had sat us on high leather stools in the main bar.  It was a bit underwhelming despite some nice features, but Old Frank Lampard appeared to give us a timely boost, until he got substituted for Mr & Mrs Blumenthal.  Like the Crow, we stayed for two (special beer researching rules - but just had same again both times so was it worth it?  Most of you would have 4 halves).  Anyway, we had to leave, there was a drunken stray in town.  Keep reading. 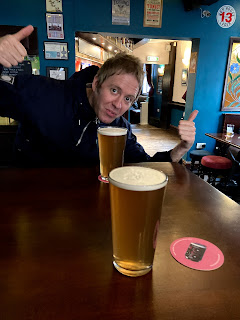 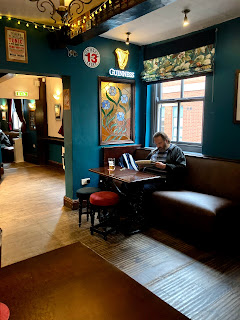 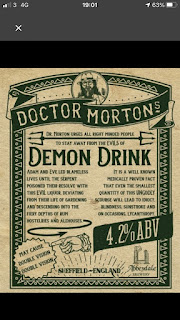 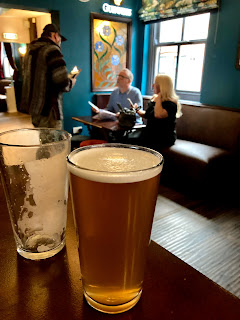 Dave wanted a nightcap in one of his old haunts, which tied in nicely with a message I'd received from our old mate Martin Taylor.  He had just returned from ticking off the new GBG pub in Pontefract, where had been led astray by the evil Leon Foster and FORCED to drink several pints of 10% stout.  And what that lady on the next table was saying, well, heaven only knows!  I am looking forward to my visit to the Old Grocers, I can tell you that for nowt.  Martin wanted to meet us for a last pint.

I told him where we were headed, and didn't see that he'd replied to tell me it was currently shut which is no surprise cos it is a music venue Dave loved from old ......

But as we turn on our haunches and I look over the road, I see Martin disappearing into a random building.  "That was him, that was Martin!" I tell Dave.  "Oh, I saw that geezer taking photos of buildings a couple of minutes ago!"  replies Dave.

Martin appears out of thin air, and falls into step with his, he looks a little bit fresh and I introduce the two.  It is the most fleeting introduction ever, for as we reach Dave's second choice, the Frog & Parrot, I hand Dave my phone for the obligatory outdoor shot, look round, Martin has vanished totally!  Hence me looking disconcerted in this photo ....... 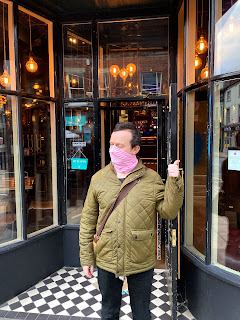 I take Dave's word for it that Frog & Parrot is "a classic, an absolute Sheffield institution, can't believe you've never been Si!" because to me, it just looks like a rather temporary kitchenette soulless Greene King bar.  There must be hidden depths.  The walk to the bogs certainly has a Wetherspoons vibe in terms of the climb, though the decor is up there with Zerodegrees outlets in terms of totally terrifying.  The staff are decent, and the Yardbird is on fairly good form.   It just suffers from having so many cleaning products and buckets out, like you are in pre-opening or at last orders.  One last wander into the street.  "MARTIN, MARTIN!"  but no reply.  Then my phone pings.  He feels drunk so has gone to the Crow for a 10% stout, or something.  We cheer ourselves up as Dave introduces me to the George Cole Minder 80's adverts for Leeds Building Society - Liquid Gold.  Look them up on YouTube if you get a chance!  8% interest rates.  Wow, anyway, on that note, I had a train to catch.  A busy Bank Holiday Weekend in Essex wasn't far off, and I had to be on top form for that. 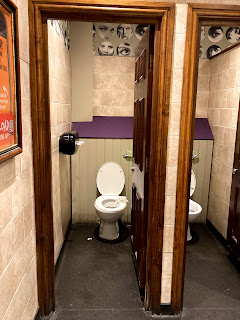 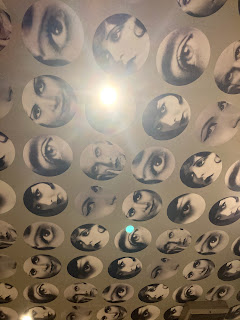 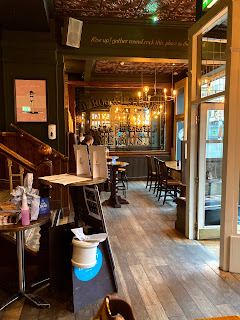 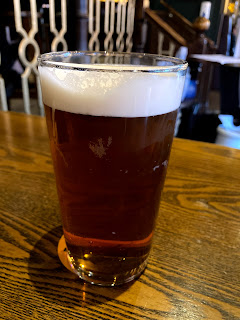 It was announced that Dave has landed a new job, so congrats to him.  One of the first questions he got, "will you and Si still be continuing with the Newsletter article?"   I think the answer is yes, especially whilst there are BRAPA South Yorkshire ticks to be had!