I forgot I actually did have a pair of BRAPA briefs ......

Fast forward to Sat 12th June, I'd never 'ticked' a GBG pub on this date before so it was already exciting.  A lady on the train had fewer friends than me so bought herself a present 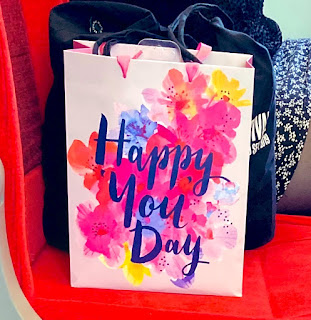 How gorgeous is Roydon?  I was expecting a damp concrete flyover type East Berkshire style town, but it was a cute little village: 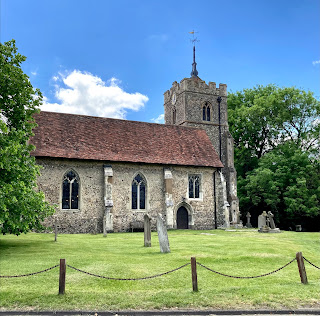 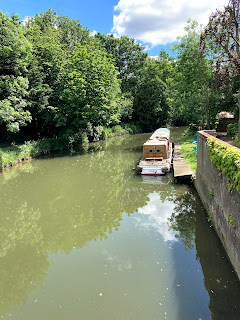 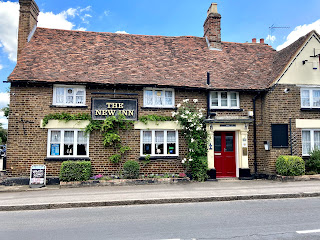 New Inn, Roydon (1799 / 3228) stymied me from the off, by 'forcing' me to have a strong Adnams Broadside.  And I had a dodgy stomach before we'd even begun!  A pissy wedding was going on outside, some faffy older ladies faffed in the doorway, so I took my chance and was served with the effortless confidence of a local who'd woken up under a pub bench, having been there all night.  The most CAMRA looking men ever spied my GBG.  "CAMRA is 50 years old this year, did you know?" one said.  "Yes, I'm vaguely aware" I reply, though internally I'm screaming "50 YEARS OF CAMRA BOOK, LAURA HADLAND, PAGE 164 MOTHERFUCKER!" but it would've been a weird outburst in the circumstances.  Anyway.  My lovely visitors were here.  Quintessential Essex GBG pub this one, the first of many strong pubs today. 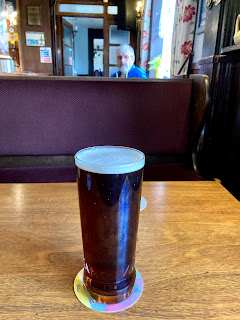 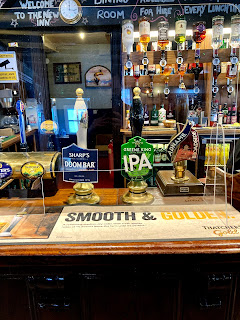 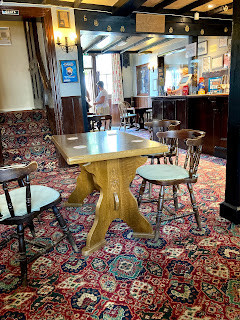 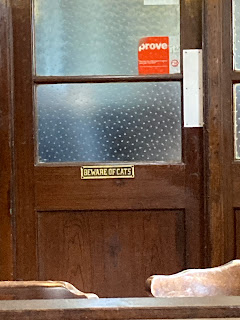 Simon Dewhurst off of Twitter had said he wanted a BRAPA outing when I was next near that mystical Herts/Essex border area.  Loving an ale or seven himself, his Dad kindly agreed to drive us to the difficult first couple, and then public transport/taxis would be our way forward after that.

When we approached the next pub, I had my reservations.  Partly about not having made reservations.  It was Euro 2020/21 heaven, can you tell how I guessed? 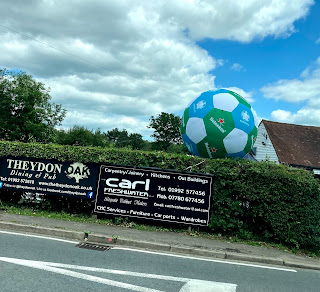 But don't be fooled by the inflatable bollocks (so to speak), this was a great pub to bring up the 40% (again) of BRAPA GBG ticks ..... 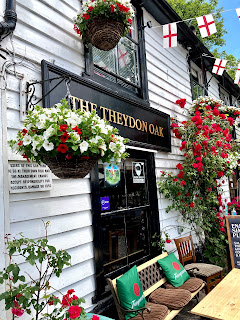 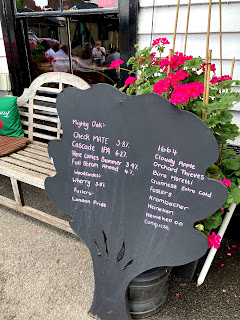 Best staff of the day too at Theydon Oak, Coopersale (1800 / 3229) as we're greeted warmly by the most northern barman in Essex "ey up pal, 50% off all ales if you brought a whippet" he probably asked, and a gang of sprite barmaids (no I don't mean they drank lemonade), were as personable as one could hope.  Outdoor only was sad, as a toilet trip showed what an indoor classic this would've been.  The giant screen was about to show Wales, but Coopersale's Welsh community hadn't got out of bed yet, so no one really cared.  The Wherry drank well, but not Leighton Bromswold 'well'.  And Daddy Dewhurst got the dubious honour of highlighting the 1800th pub in his first.  These fair weather BRAPA supporters eh stealing the glory!! 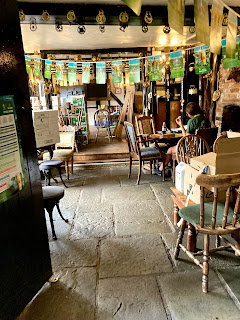 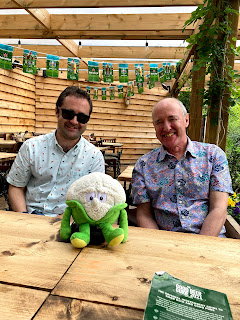 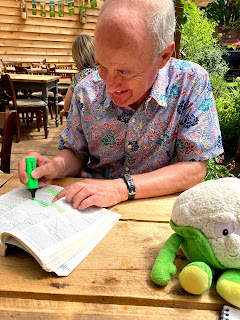 DD drove us the couple of miles to Epping which was further away from Coopersale than it looked in the GBG.  He left us with the sound advice "look out for the landlord, Robin", and sped off, after one of the finest BRAPA cameos in recent history. 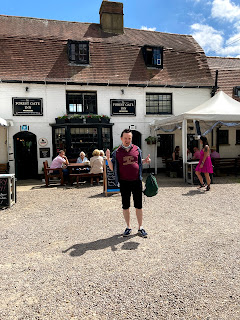 Forest Gate Inn, Epping (1801 / 3230) was a strong contender for 'pub of the day' in a very strong line up.  Sitting inside was a bonus, it was an immaculate pub, it had a near 'other wordly atmosphere' and when Simon told me it was barely changed in 50 years, it was easy to accept as fact.  Staff superb, my Bishop Nick (def not brewed by a pilot at Andrewfield Airfield) one of the best kept pints today, the chips Simon got were top class (which they should be at that price!) and just when all hope seemed lost, the famous Robin waddles over and sits on a stool directly in my eyeline, presumably for BRAPA purposes.  Daddy D used to be in a rugby scrum between Robin and his similarly proportioned brother.  Amazing to imagine.  Scampi & Bacon Fries behind the bar too, pubs don't get much better than this. 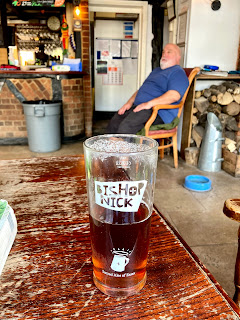 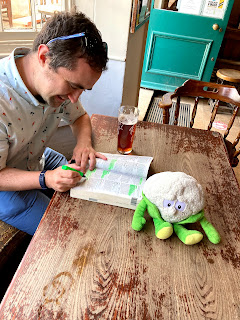 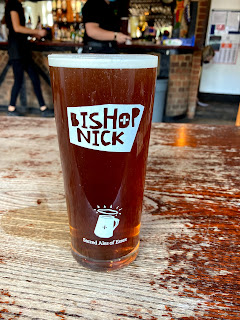 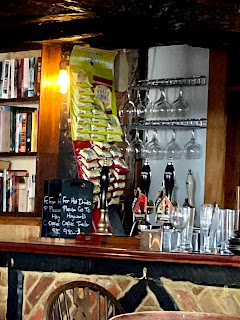 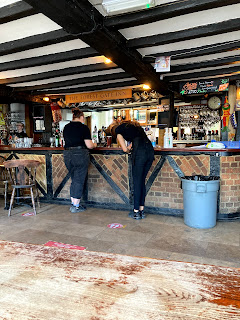 A short stride out to Epping Tube to get to Loughton next, and Simon D was really warming to the BRAPA ethos, as he spotted 'hero of the day' even before me.  A bloke with a feather in his hat walking in front, so busy looking up at aeroplanes, he kept tripping up, dropped his keys, then threw them in the air in a "don't worry, I'm cool!" manner, that didn't really hold much conviction.

Loughton was disappointing if you compare it to the other places today, boring high street chain shops etc.  Though it did have this:

It was perhaps a sign (I mean, I know literally, it is a sign) you can't ever expect to have it quite your own way on any given BRAPA outing.
For as we stepped up to the next pub, both our hearts sank a bit at the chaotic marquee scene that greeted us but brave face for the camera and all that: 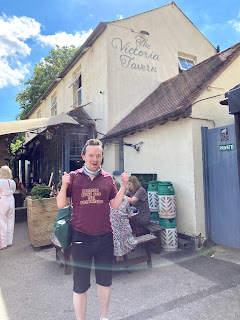 Victoria Tavern, Loughton (1802 / 3231) was the weakest pub of the day we both agreed.  Having said that, the interior had enough about it to suggest that coming here on a normal marqueeless frosty night in January, you could have a decent experience.  No, my only beef was with the staff really.  I was buzzin' when the nervous barmaid outside told us we could sit inside, which seemingly no one else had asked today, so I walk in all chatty n breezy, and what do I get in return?  Sullen wet lettuces, the lot of them, especially the dude who served us.  Should reconsider his role in hospitality with this attitude, why would you want a customer facing job?  My TT Landlord was ok, but not enough to save the pub in my mind.  Taxi here, must dash! 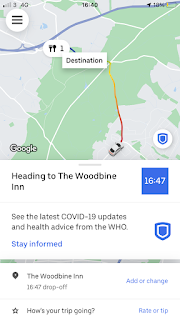 Uber dude had parked out front, we'd gone back, so we had to dash back through the pub as I could feel my customer rating ebbing away.  Then he wanted to risk getting through these roadworks, which didn't work, but I still felt obliged to online tip him for a 'good effort', once we reached the pub. 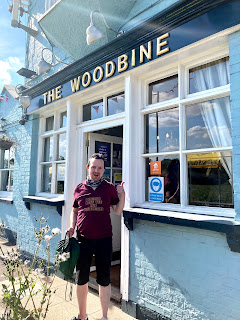 And what a pub it was!  Woodbine Inn, Waltham Abbey (1803 / 3232) may not have been as outwardly aesthetically pleasing as some of the darker, old, beamed pubs today, but it felt the most authentic, proper boozer of the day.  Guy sitting by door with broken leg tells us what beers are on, thought he was a customer, as he hops up to tell staff what we want.  But he is the landlord, and unlike Robin earlier, you can tell he's actively itching to to 'get back to work' so doing what he can under the circs to keep busy and useful.  Superb guy, hobbles over later to check we are ok.  Someone out of sight is drilling a hole in a wall. Simon D observes "you can tell you are in a great pub when there is mysterious DIY going on in the background".  He's not wrong.  There's much Welsh cider going on, and a guy in a Welsh facemask.  So this is where Coopersale's Welsh contingent have got to!  Brilliant locals like Yellow Charlie and his mate with braces with the strongest rural Essex accents imaginable discuss tales of the past (probably, they may as well have been speaking ..... Welsh?)  Simon drinks 2 pints to my 1, I ask if we can pay, barmaid says "you mean you want to stay for more drinks?" but taxi II is here.  Utter classic, and I've accidentally written a normal sized blog entry! 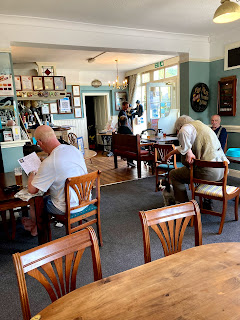 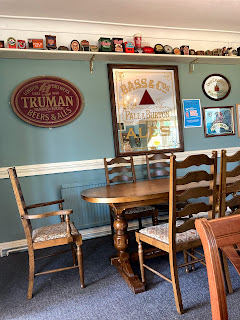 More minus Uber points for me as I get told off for picking dry dead skin off my arm in the back of her taxi, though I did kinda draw attention to it!
I say goodbye to Simon at Waltham Cross station, had been a great day, and head back into London, but my stomach pains are back, Tom Irvin is also gurgling somewhere in London, and I'm not up to even a pint of ESB in Parcel Yard, never mind a bonus tick in the Stoke Newington area!
By York, I decide Liver n Onions might sort me out ..... 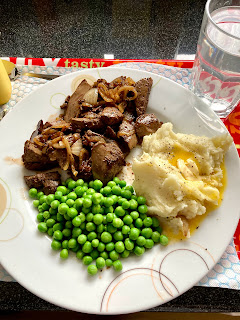 But all night, into Sunday, Monday, Tuesday and Wednesday, I've got the shivers, that sensitive skin thing, awful stomach cramps, even have to take 2 days off work and I only work from home!
Wonder what it was, but never fear, for by the following Saturday, I was on fine form raring to go oop North with Daddy BRAPA,  join me in our final part tonight for that one.
Cheers, see you before midnight for part 3, might get myself a coffee first!
Si