BRAPA INN BRIEFS (PART ONE) - Writtle to Bridlington and Beyond

I woke up in a cold sweat at 3 a.m.  I realised I'm going on holiday tomorrow, one of those liver defying BRAPA epics.  And I've still got 18 pubs to tell you about!  I'll never catch up at this rate, unless I keep it brief.  Or less waffly than usual.  A bit like those early 2000's GBG's with the 'Inn Brief' section.  What did it mean?  Were these pubs less good than the main entries?  To this day, nobody knows.

Wheatsheaf, Writtle (1792 / 3221) is up first.  Lovely village, huge duckpond, still I couldn't see a Pochard.  Staff were very friendly, one barmaid was having her first day and being well looked after.  The other indoor customer was a very lugubrious bloke, the effervescent bubbles in his lager sparking in the sun didn't match his mood.  I got dragged into a conversation about Blue the Dog, and who the bitch likes best.  Classic Gray & Sons regular GBG entry on a slope, maybe. 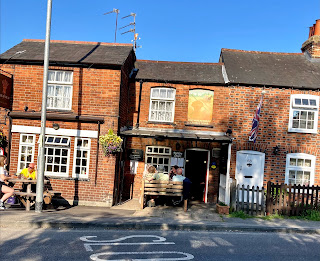 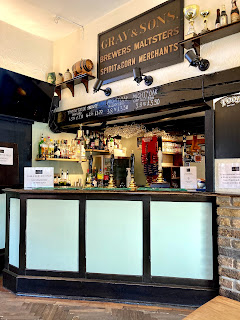 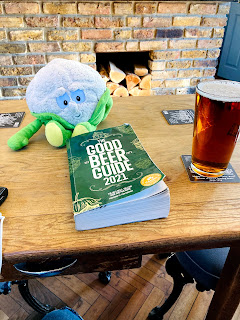 Original Plough, Chelmsford (1793 / 3222) by contrast, was dreadful!  Sticky, chavvy, my Tribute wasn't bad but tasted like half a jar of sugar had been plopped in.  Everyone was drunk and badly behaved.  The ladies behind me nearly had a fight with another group they'd encountered in the loo.  I was going to say "calm down dears, it is only a commercial" but would've got stilettoed in the eye.  Weird entry considering Chelmsford's relatively strong suit of GBG pubs. 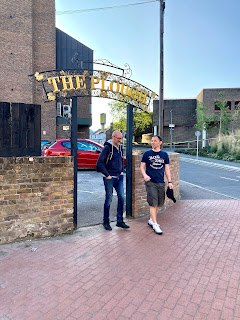 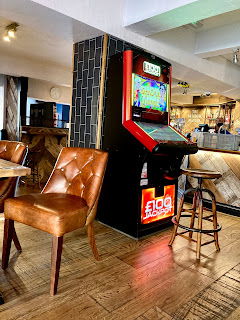 Fast forward a week, and Daddy BRAPA returned for the first time since 4th November, in the town his Mum lived.  I only had one conversation about BRAPA with Grandma Betty before she died in 2014, but I could tell she was a fan of the concept, recommending me all the pubs of East Yorkshire villages like Lund, Walkington and South Dalton.

I love Brid.  I won't have a bad word said against it.  I'm allowed to say it is a bit shit, cos it is, but I'd defend it if anyone else said same. It was stacked out, excuse the pun, as I broke into the back entrance of first pub before he'd had chance to properly open. 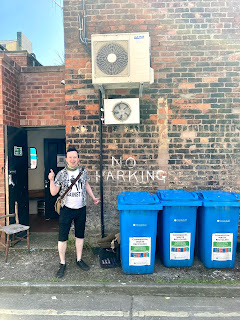 Stackhouse Bar, Bridlington (1794 / 3223) was a blink and you'll miss it type place.  It played songs from Frozen and Little Mermaid, and was generally quirky.  The quiet but nice guv'nor only recovered from my intrusion when 'This is How it Feels' by Inspiral Carpets came along and he was a reformed human being fist pumping and singing.  I was getting sunburnt.  Turquoise haired couple drank cider and slagged off Hermes.  Dad went to find tea shop.  I stayed for an extra half a Bristol Milk Stout. 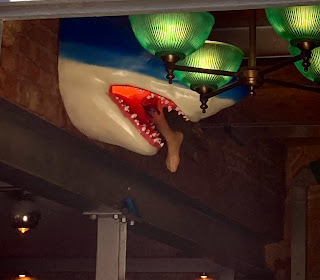 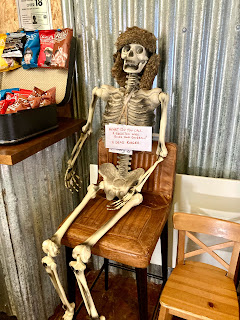 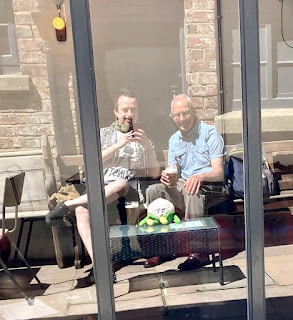 Pre-emptive next recommended by a guy called Fogden.  With Dad AWOL and it being two streets from here, it made sense.  When you see an old bloke outside on a shopmobility scooter, pint in hand, you know you've struck gold. 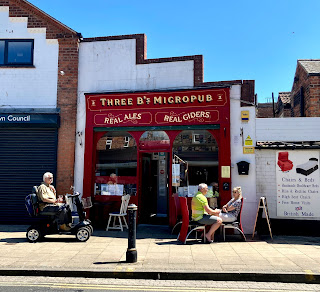 Three B's Micropub, Bridlington probably nothing to do with the Lancs brewery (Blackburn?)  I drank half a cider in any case (cos I bloody well could, pre-emptive laws) , lovely n dry called Dabinet or something.  Main dude was lovely, thought I was on a cider tour of Brid.  GBG n Col confused things. The indoor locals, who'd been arguing about haggis, heard me explain BRAPA, and soon were recommending Brid pubs left, right and centre.  Am sure this will get in 2022 GBG. 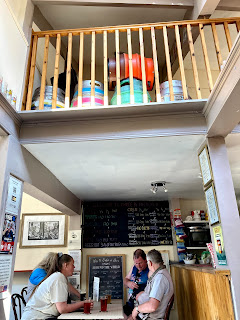 I found Dad loitering outside the Telegraph pub, and we walked back to where we'd parked, near by 'late opening' GBG tick. 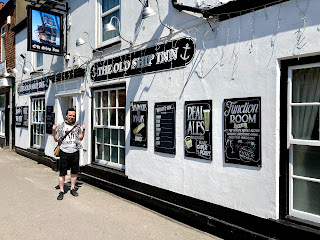 Is Brid becoming the new Halifax?  6 GBG entries, and unearthed another classic here at Old Ship Inn (1795 / 3224) a beautiful old pub, just as guv'nor of last place had said.  Random Sunglasses Lady asks barstaff "can I paaaark around here all day?"  "It is like asking a car park attendant what ales they've got on!" fumes Dad, who had missed pub weirdness.  Loads of signs NOT TO MOVE FURNITURE, Black Horse Preston styleee.  Everyone had a shoulder tattoo.  "It's quieter than usual cos all the fuckers in down in t'town" said a motivated Carling drinker by the bogs.  I hadn't asked. 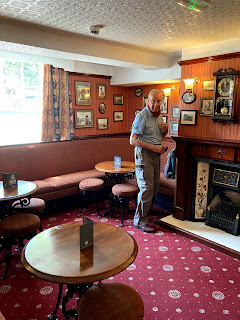 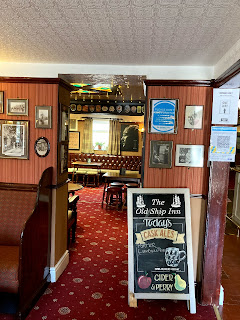 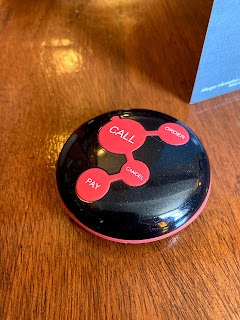 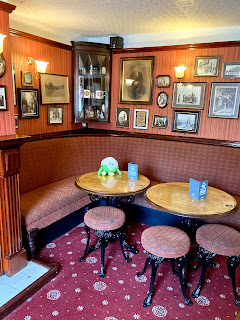 Onto Pocklington (deffo stopped for a wee near a gate of a farm), which has only recently decided to do pubs that get in the GBG. Dad dropped me off and went a-wandering.  Pock was surprisingly quiet and chilled out, like everyone had got sleepy after lunch and drifted away.   Thank goodness. 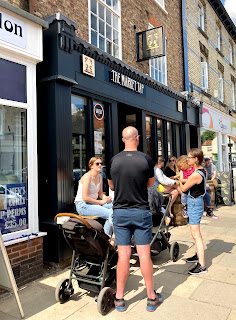 Market Tap, Pocklington (1796 / 3225) was an unreliable shambles two years back when I tried to tick it, but Brew York have taken over and today it was quite splendid.  Soooo many babies though, if there was a BABPUB (Babies Amazing Boozer Pop Up Book), it would def get in.  I sat by a fridge, nearly bought one but steady on Si, this ain't the Bank at Willingham.  The 'Calmer Chameleon' was the perfect beer name given the atmosphere (quiet babies) and Colin's ability to camouflage (sort of). 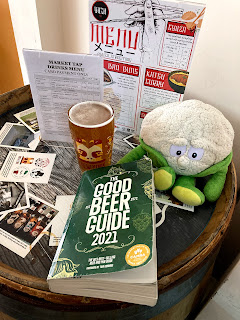 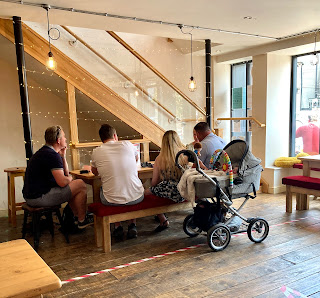 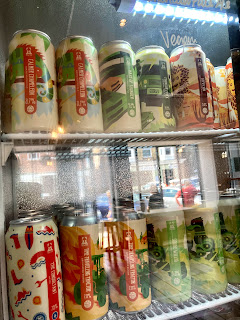 A short walk to an even quieter part of Pock and I found the other pub, a quite famous old hotel. 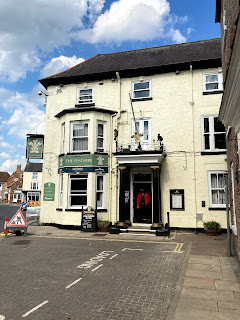 Feathers Hotel, Pocklington (1797 / 3226) was just me and a very miserable looking old bloke supping bitter across this giant room from each other, until Daddy BRAPA sauntered in looking all sunny and swaggery and saved the day with a tale of how his friend was seeing a 'lady from Hull' he shouldn't have been, so he brought her here, nice and out of the way, but on the table next to them, was someone he knew!  Oh dear.  Dad gleefully texts his friend to remind him.  He's still waiting for a reply. 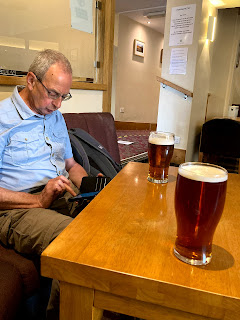 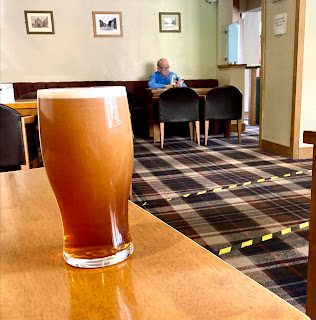 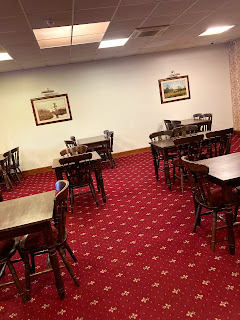 The small secluded village of Newton on Derwent was home to the days final BRAPA tick, not far from my sister's house but we didn't pop in in case she poisoned us with her vegan stuff. 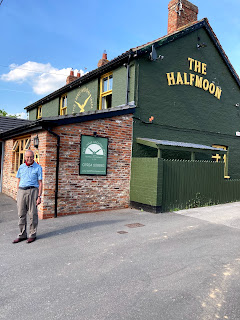 Half Moon, Newton on Derwent (1798 / 3227) obviously had a recent modern makeover both out and in  (probably involving better beer than ever before) but it still had that fabulous sleepy village, homely  community feel.  Staff were first class, and a new Theakstons ale called Summit drank surprisingly well.  We got chatting with a couple in the baking sun out front.  He had a 'kee wee' number plate, yes he was New Zealandish so Dad tried some cricket 'bantz', she was from Wantage but BRAPA is yet to recognise Oxfordshire.  Such afternoon heat, Col's florets were crisping up! 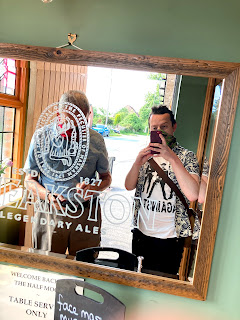 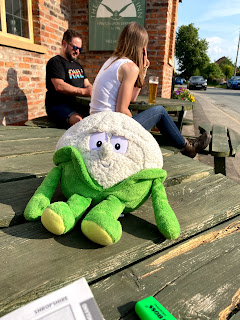 They'd reminded me of a pre-emptive I needed around here, so we phoned Mum to say the traffic was bad so we'd be late for tea (she asked if we were actually going to another pub, I tried to act upset and insulted - it didn't work!) 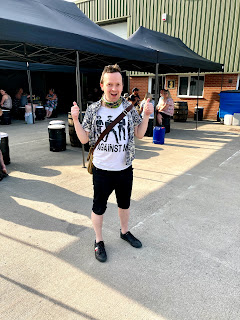 Hop Studio Brewery Tap, Elvington was proper hidden away round back of village, like in this industrial unit with bits of lorries and kids running amok.  It was like one of those 'trailer trash' American documentaries you see from time to time.  I loved the setting!  Dude recognises me cos he'd delivered me some birthday beers, lovely guy.  Their App was one of the least intuitive I've used to date, and that is saying something!  So much so, when I'd ordered and went for wee, he assumed I was coming in to tell him I was struggling with the App!  Ales lovely, fuzzy in a tropical way.  Right, home James (well Bernard), we don't want our minced beef, peas n cheesy mash going cold! 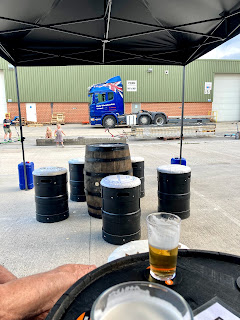 And on that note, I'm off for my actual Friday 25th June tea.  See you later this evening for part 2, where we'll take another trip to Essex, with Simon Dewhurst and Daddy Dewhurst.