I had no idea what ghostly goings on were waiting for me as I stood at a Reigate bus stop, determined to get to my last remaining rural Surrey outlier, a few miles to the north of town.

It didn't take long until I pressed the bell, just up from Lower Kingswood, and crossed the crazy Brighton Road, meandering down Chipstead Lane where things became very leafy very quickly.  Luckily, there was the thinnest of footpaths but not enough to stop me occasionally getting prickled by a bramble hedge.

I was just starting to think that this pub didn't actually exist (rumour has it they throw one into every GBG just for shits and giggles, usually in West Wales or Plymouth but not always) when I saw a sturdy looking old inn twinkling from behind some barrels ...... 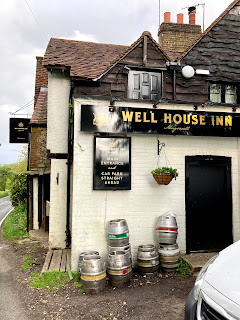 A quick peer in through a cobwebbed window showed me that it did seem to have held something of the character of its 1564 triple cottage origins, though as is so often the case in these 'restrictoratory (new word) times', arrows forced me around the back into a twee rambling garden, where woodland elves disguised as staff members flitted around, sprinkling posh Surrey pixie dust onto my forehead. 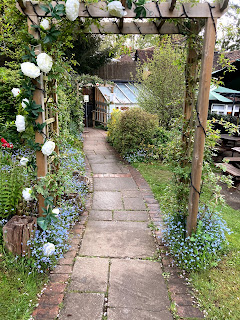 I expressed a desire to sit inside, which shook their elfin cores, but they did find a space for me in a room to the left with two rather posh old boys, who kept me amused by quietly discussing a variety of topics, lines like "I'm really disappointed in Trump cos he seemed an alright bloke at first" had me n Col chuckling silently.  Welcome to Well House Inn, Mugswell (1766 / 3195) and for all the fine dining ethos, the ancient atmosphere really was electric and I'm glad I'd made the effort to get indoors.  It needed some spark though, so it was quite pleasing when the more excitable of the two old men had his pint suddenly smash on the floor.  I was the first to suggest ghostly goings on, and to my surprise, he bought the idea and so did the barmaid seemingly as she mopped up spilt ale and shattered glass.  His more reticent friend said it was more likely a slightly damp table, on a bit of a slope.  "Had you had it in a coaster, you'd have been okay!" he said, too posh for beermats in here.  Here was my chance to shine.  "Ah yes, coaster or ghoster?!" I replied.  Well, let's just say it didn't get the laugh it deserved and he got up to go the loo.  Mr Excitable leans over and whispers to me that both men are quite famous, and gives me their full names.  Mr Reticent works in films, on stuff like Harry Potter, and he works in 'the music industry' but neither of them like to talk about it!  And yet they met by chance over a pint in this pub.  Warming further to the ghostly theme, Mr E is now chatting Ouija boards and an ill fated overnighter in Wells, Somerset, where a ghost ran a hand down his leg in the night!  Ooo errr, getting a bit saucy, I decide it is time I seek out a bus! 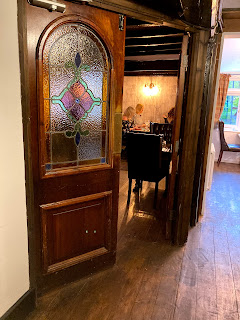 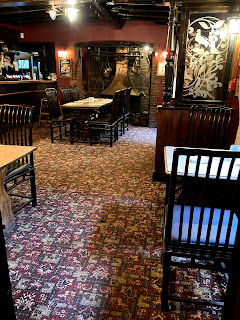 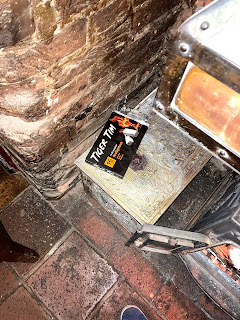 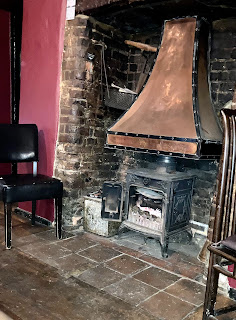 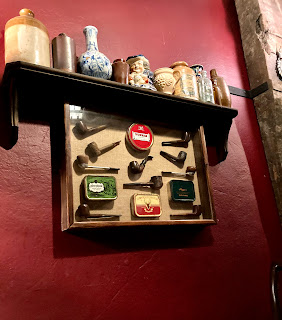 Back in Reigate, it was time for the 25th pub of the holiday, and the last one of the day: 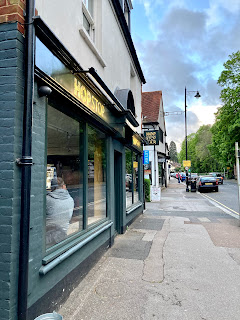 'Si, tell me, as a frequent visitor to Halifax and Bournemouth's beer scenes but being less familiar with Reigate, how would you describe this one?' I hear you asking.  Okay, bit overly specific but here goes.  'Somewhere halfway between Micro Moose and Kobenhavn, thanks for asking' would be my reply.  Cheers!  Oh, and welcome to GBG debutant, Hop Stop Bar, Reigate (1767 / 3196), a surprisingly deep, spacious yet cosy continental style boozer to help restore your faith in the town if you needed it (I did!)  An electronic beer list (ooh la la) glimmered to my right, small groups of friends dotted everywhere reminded me you don't need a friendly cauliflower mascot to have a good time.  So comfortable was I, I stayed for a second (okay, train timings back to Guildford may have been a factor) so I went for a 'Look Around You' cos I loved the TV series.  Thanks ants .... thants!  You know it.  Strong stuff, ooof good grief, I went from having all the time in the world to trying to force down those last few sips.  But at £7.40, determined to enjoy every droplet.  This holiday has reminded me that good pubs need good people, and cannot be great on beer alone, so it was great when James who worked here came over for a friendly BRAPA based chat.  By my final swig of beer, I was describing this place as having a "nicotine 1970's Scandanavian jazz sex lounge atmosphere".  Surely that wasn't the beer talking?   The pub approved though, and now we are friends on Twitter, gawd bless.  Time to stagger back to Guildford.  I'm not drunk, you are. 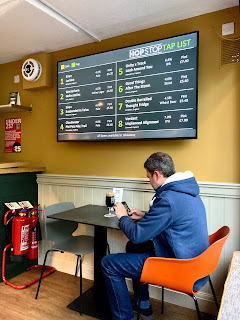 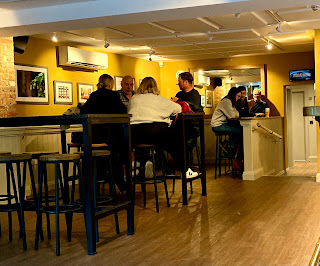 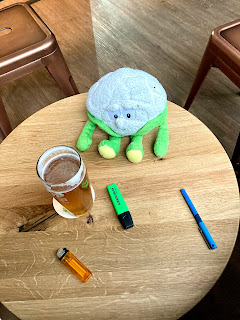 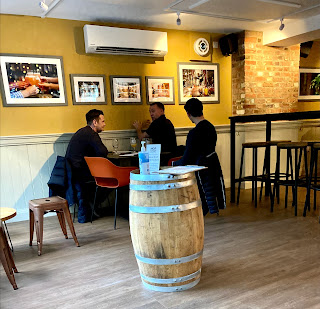 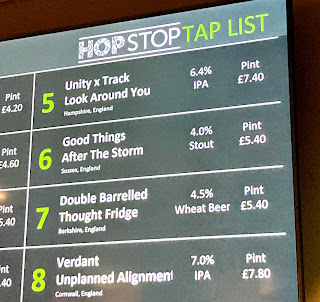 I still want to tell you about one last pub, my first on day 5, and aware this is turning into a classically overly wordy BRAPA blog!

It was raining, grim and bloody miserable as I arrived in Staines.  The front of my right knee (it is usually the back of the left) was aching, for the first time, this epic pub holiday was taking it's toll!

Daddy BRAPA did his best to lighten the mood with his favourite Staines piece of info: 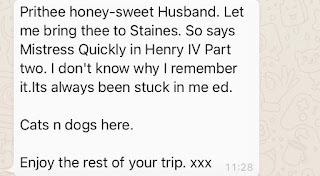 If Mistress Quickly was an early days pub ticker, I guess I can understand her comment.  Otherwise, I'm not totally sold.

THREE new pub ticks after the THREE I did in 2020.  Cheers Staines CAMRA you evil horrors!

One looked very closed from everything I'd read on the net, that was London Stone , a sort of gig venue by the sounds of it, casualty of lockdown perhaps, but I wanted definitive proof if I was gonna be claiming 'Surrey completion' ...... 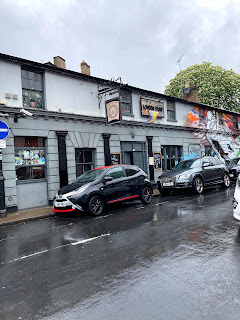 You may be able to see the same thing that surprised me ..... a door ajar!  I crossed just at the moment a blonde haired lady with umbrella presented an indoors turquoise haired lady in pyjamas with what looked like a packet of money, who grabs it and shuts the door behind.  "Are they opening any time soon?" I ask the former.  "Haha, nooooo!" she replies in jolly fashion, before hurdling a puddle and disappearing around a corner.  (More on London Stone tomorrow).
Oh well, onwards and upwards.  To the banks of the Thames, getting lost in a sort of underground car park, then bumping into a food van as a raindrop dripped down my neck and a seagull squawked, I felt more like I'd crossed Wearmouth Bridge in Sunderland and was off to the Stadium of Light for a Papa John's Trophy tie v Leicester Under 23's.  Mistress Quickly or Aiden McGeady, who would you select?  I digress.

There must be an entrance somewhere?  So I circle the building like looking for the away end, and see a door facing onto the THAMES SIDE (the clue was in the name all along!) ...... 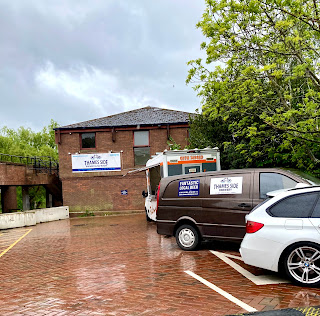 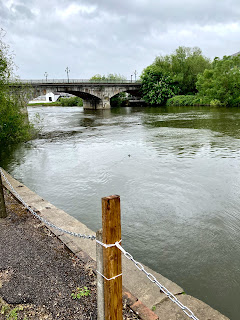 I proceed with caution, it looks more like a brewery than a pub, but then being called Thames Side Brewery & Tap Room (1768 / 3197) I cannot be too surprised by this revelation.  I hurdle two dogs, one of whom is wearing the same mustard jumper as those two barmaids in Dorking's Cricketers.  I wedge myself in by the bar scanning the pumps, and order an Egyptian Goose.  All their ales are bird themed, which is a coincidence as this is the first time I've brought my Bird I-Spy book with me this holiday - more on that in Part 10.  He tells me he'll bring it upstairs, and points me towards this harsh looking staircase.  After what had been an inauspicious start, I'm delighted to see the room open up into a comfortable, plush furnished, bright and rather decadent room, with large windows afforded great views over the Thames and an interesting looking jukebox.  The colour scheme screamed Shrewsbury Town, not sure if this was the intention.  In any case, I hadn't been expecting this, but rather a couple of cold metal benches and rain dripping on me.  This was lovely.  It got better too, as first the young dude who served me stayed for a chat, pint was on top form, and then main man Andy came over too to introduce himself.  Both top blokes, and like in Hop Stop the previous night, it really does warm the heart when people make the effort.  Sad to stand up really, rail wasn't letting up, but I must crack on!  Which I'll tell you about on Friday, I'll leave you with the pics, ta for reading. 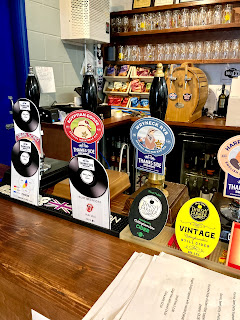 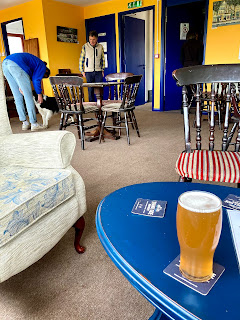 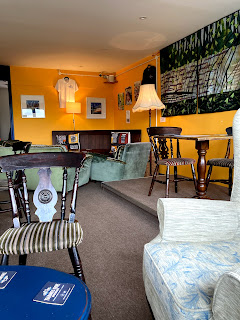 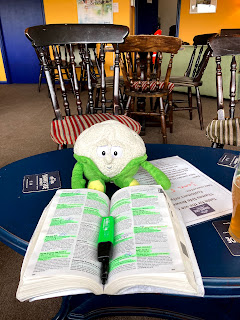 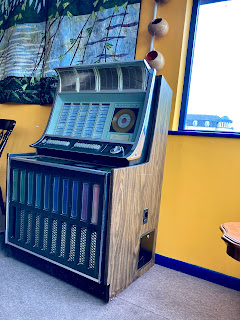