My second Farnham pub was tucked away in a much more peaceful side street location than Nelson Arms, and a quick browse at the 1982 GBG (I have to next to my bed, don't judge!) shows it was quite the real ale mecca even in those days, in the days where any handpump pretty much guaranteed you a GBG spot probably. 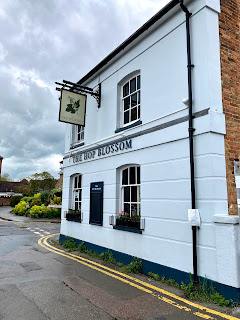 Hop Blossom, Farnham (1751 / 1830) had an incredibly central London atmosphere about it.  It combined a light airy interior with one of those corner bars, and if you squinted closely enough into the nooks and crannies, you could appreciate it was a lot more characterful than your first glance would suggest.   The dearth of customers was the one thing that reminded you this wasn't Central London, and when I arrived, a Fullers grease filter guy was enquiring as to the domestic cooking arrangements.  "I couldn't let you into the kitchen even if I wanted to, but we've not done food here in months" Mr Blossom 'reassures' him, and our greasy guy slips sliding away after what had been one of those classic Hitchcockian BRAPA cameos.  My pint of Hophead slipped slid down equally nicely as I got talking to the young Irish dude behind the bar, a really canny lad, an animation student specialising in 3D.  He got off to a shaky start, referring to Colin as a 'teddy bear' which is a new one for our poor cauli, who has heard 'cabbage' and 'weird fucking green thing' before, but never this!  Our burgeoning friendship was cut short by one of those larger than life characters.  She came crashing through the door, "I don't wanna do this shit!" she exclaims when asked to Track & Trace and wear a mask.  "I've got a lung complaint so technically, I don't need to!" she laughs,  but when it turned out she not only had Irish ancestry, but had also studied 3D animation, well, I was relegated to second place in the barman's favourite customer league table!    She had a dog too, or a man who knew her did, almost as yappy as herself.  That mutt got more love than Colin, and technically, is more like a teddy bear too.  For what had initially looked like being a fairly dull experience, I was quite won over by this pub in the end. 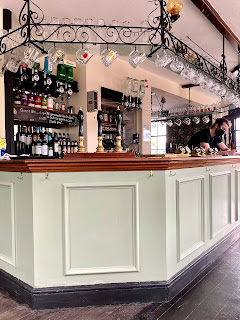 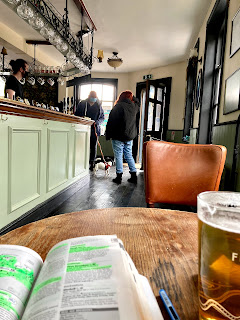 It is easy to slip into other counties without realising when you are doing this pub ticking lark, and as determined as I was to get Surrey bottomed out, sometimes it is inevitable.

From Farnham, you'd expect me to slip into Hampshire, right?  Well, only BRAPA logic can explain why an hour or so later, I found myself in south west London, or 'actual Surrey' as it seems everyone other than the GBG compilers would have you believe.

Welcome back to Surbiton ladies and gentlemen!  My third BRAPA visit here, and whether we are talking that crazy Coronation 'Spoons, man-hug clink house The Antelope, or that weird but wonderful disfigured Victorian child locked in the cellar, The Lamb, Surbiton always seems to do well for me.

And today was no different as I stepped up to this cracker, which I totally forgot about when considering my top five monthly pubs yesterday: 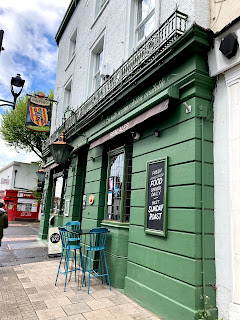 Black Lion, Surbiton (1752 / 1831) and you only have to be inside for five seconds before you realise "oh yes, this is a pub!"  Don't be put off by the mismatched, you could say slightly garish, furniture.  It FEELS like a pub, it SMELLS like a pub, it has Irish accents and horse racing on in the middle of the afternoon for heaven's sake.  The perfect time to be in a pub like this I'd say is now, 2pm-4pm midweek, post lunch, pre work finishing time.  With the sun streaming in through those beautiful stained glass windows.  This is why BRAPA holidays are such fun.  It drew me in, and I lingered a lot longer than the 25-30 minutes I usually give myself.  Okay, so my fake money versus real money joke fell flat when they mistook my Yorkshire Bank Goldcard for American Express - something I've had to suffer in quite a few pubs this month!  A jolly couple who held Glasgow responsible for the spread of the Indian variant loomed above me, and got a lot more attention from the staff than me "You okay there guys?  Another drink?  Hahaha, heeeeheee hee , ho ho ho".  I got the occasional glance from a distance and vague directions to the loos.  Maybe I just looked content! Or incontinent.  Sorry.   My Young's Original was 'pleasant', sure I've enjoyed it more though in the not too distant past.  But it all got me thinking, what makes a great pub?  What I want from my pub visits is a living breathing real life boozer like this.  I know National Inventory Heritage Grade II listed pubs are supposed to 'wow' us pub lovers the most, but too many of these places (not all) are like carefully manicured museum pieces, suffocating under the pressure to 'preserve' a moment in history for the casual pub tourist, the romantic olde worlde view of the pub if you like.  I even went to one very well regarded pub in the North East where I'm sure they bought the most authentic Dulux blend of nicotine coloured paint so they could top up their tan!   Give me a unsung pub hero like this any day. 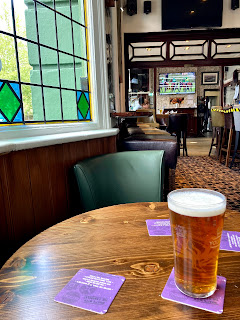 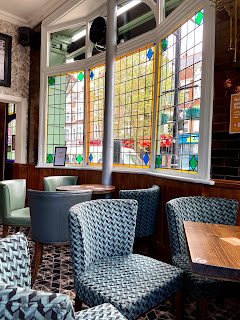 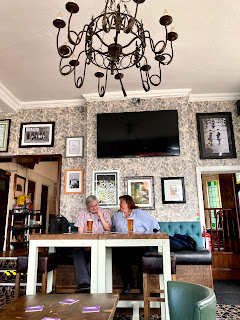 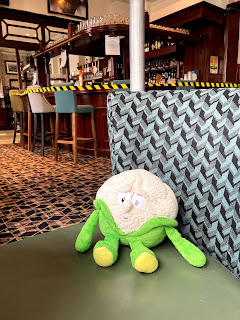 Next stop, was a much more urgently required pub tick (because it is listed under Surrey), and presumably only a stop or two on the same train line.  Esher.

Suddenly it was all coming back to me.  My early BRAPA days.  An incredibly shitty morning pint in the horrifically busy 'staff wearing white pressed shirts' GBG regular Wheatsheaf (I assume I got unlucky that day).  And I retraced that same walk I did with Daddy BRAPA and Tom Irvin on that day.

Straight past Sandown racecourse I walked, where these stewards nearly kidnapped me from the main road and dragged me in.  First I thought they thought I was a jockey!  But no, turns out this was a Covid vaccination centre and they thought anyone loitering in this area looking confusedly at an iPhone was surely after an injection.  This led me to become the first person in Esher to utter the line "had my first jab in Bradford last week mate!"

The traffic was nose to tail, we must've reached rush hour, I nearly got mown down about 5 times when I finally found the pub near this weird corner ...... 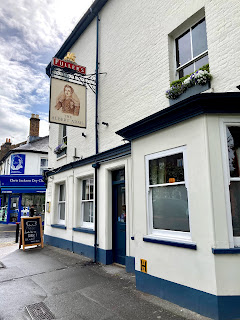 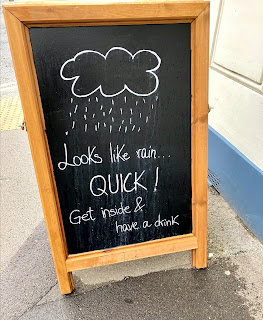 The blackboard wasn't kidding. It was third consecutive day of intense showers followed by periods of bright sunshine.  Welcome to the Albert Arms, Esher (1753 / 1832) .  First thing to say is how first class the staff were throughout, 'natural' in their conversation, whether it was weather chat or the concept of BRAPA.  Sadly. they could afford to be, me being the only customer in such a busy location at this time of day was rather depressing.  Pubs had been reopen indoors for TWO days, this pub has only opened yesterday, maybe the message just hadn't filtered down to the locals?  Does Esher do locals?  The only person I've ever heard of from Esher is Lily James and I can't imagine Chilly Lily knocking back an ESB.  Fullers don't help themselves with their 'little laptop reception desk on arrival' Covid rules.  This pub had almost identical vibes to the King's Head (Stoke Road) in Guildford, and I've seen it so often since 4th July 2020, Fullers staff tying themselves in knots with their online virtual map of all the tables in the pub.  Even the lovely guys in here were like "shall we shift table 8 over a bit to make space under the stairs?"  There's no one here!  Finally, a couple of locals appeared from the shadows and old Lewis in pink shirt to match his face was getting angry about the premier league.  Sure there's plenty of non league teams round here you could support Lew?   As I started to get ready to leave, the guy at the booking table, Toby I think, says "it's all kicking off now, we've got five bookings!"  I couldn't even tell whether he was joking or not. 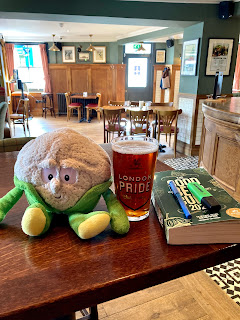 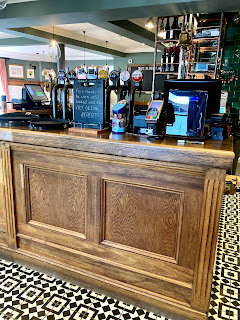 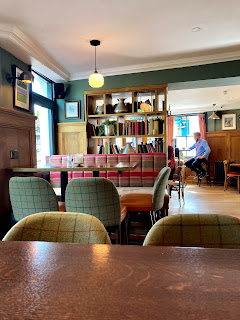 I wasn't done with today just yet, and the best pub was still to come.  Join me tomorrow for tales of that, more awful weather, a mistaken pub name, and the introduction of our BRAPA hero of the week, Mr Ed Wray.