My stoic taxi driver took me onwards from Stow Maries to Danbury, which I thought was a return to civilisation, but in truth, just a less remote village, 'twixt Chelmsford and Maldon.

The setting was incredibly pretty, all lush green commons and quacking ducks near a pond.  The BRAPA warning sirens were flashing red and shouting 'danger team!'  Locations like this often give way to a twee, flighty pub experience. 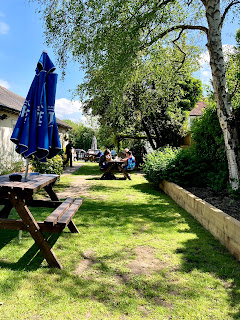 Although the guy who greets me is very personable here at Cricketers, Danbury (1789 / 3218) it soon goes for the 'full house' on the bingo card of 'Pubs during lockdown in the Maldon vicinity'.  Marquee at front ruining pub view?  Check.  Must sit outdoors?  Check.  Given a 30 minute time limit?  Check.  Indoors looks plenty spacious enough to accommodate drinkers but can only go indoors to wee?   Check.  Clarty warm Spitfire which takes an age to arrive?  Yuck.  Vegan students on neighbouring table chat enthusiastically about a nut roast whilst their dog whimpers?  Yuck.   Mutual dog love-in with neighbouring table who also have an annoying dog?  Yuck.  Students have a Harry Potter fuelled debate?  Ugh.  'Once I went from Durham to Ambleside, look what a proper northerner I am?'  Puke. Americans in 'Oooh we are wearing matching hoodies, how swell!' exclamation.  Groan.  And here was me worrying 30 mins wouldn't be long enough to enjoy the experience.  25 mins, I was outside looking for a Pochard, waiting for another taxi to appear as Sunday bus service meant nothing for hours.   You can't even totally blame current restrictions too much on this one, just a poor pub unworthy of GBG inclusion.  On this visit at least. 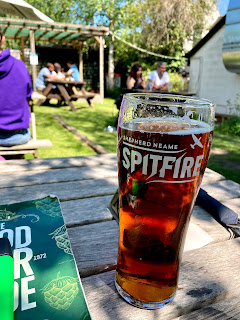 Taxi driver properly cheers me up.  Character of the day!  He's young.  He's bright.  He's full of grand opinions and ideas.  'Banks are destroying the world' he later concludes (me mentally trying to invent a fake job for myself .... hmmm, beer underwriter?  Is that a thing?)

He tells me how good of him it is to pick me up even though my next venue is nearer to Maldon, and he really only serves the Chelmsford area.  And then, this little gem.  "Is that a Liverpool accent I detect mate?"  I tell him no, I'm from York.  "Oh well, up north, close innit?!"

Yes, he actually said that. The same guy who less than five minutes ago had tried to convince me that Chelmsford and Woodham Mortimer were worlds apart.  Today was testing my resolve!  I need a pint, 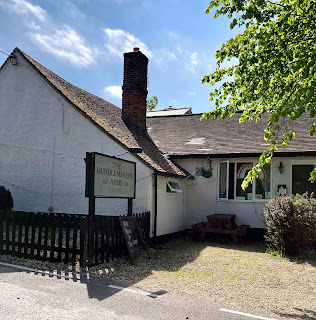 Glorious olde worlde pub, the Hurdlemakers Arms, Woodham Mortimer (1790 / 3219) , you could tell you even make it inside, but being closer again to Maldon (and I'm sorry for sounding like a broken record here, but I have to tell it how it is), in their attempts to retain as many indoor seats as possible in this gorgeous crooked old building, they've cloaked the place in perspex screens.  I could barely raise my pint of Ridley's Rite to my lips without my elbow making one of them wobble.  This just wasn't comfortable.   Luckily, the garden was gigantic and I was soon getting sunburnt without realising, here was where the action was!  Kids ran about shouting 'winner winner chicken dinner' from a safe distance, I even wrote at the time that I'd happily be buried here which proved to be apt, because a few minutes later, a Dad turned up with a spade.  Sinister.  Was superb out here though.   I'd already been back in to the loo once, but when I went back for a second time, one of those little 'danger wet floor' signs had appeared in the doorway, and I got a gentle telling off for coming in this way, as you should go right round the front of the pub to use them!  So the pub rules were evolving as the afternoon went on.  Insane times, but I had a bus to catch. 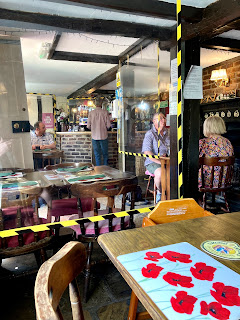 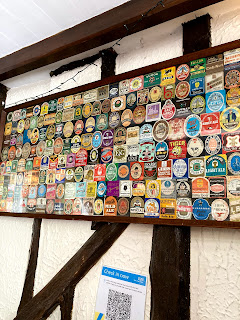 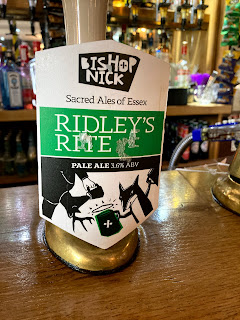 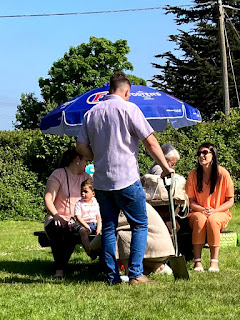 It was one of those 'bus hailing' events where you really have to have your wits about you, and so did the driver!  I couldn't have held my hand out any further in advance, but the unusual location, bend in the road, and fast traffic meant he had to screech to a halt, a huge plume of dust flies up, passengers go flying, I almost feel guilty.  He tells me what a legend he is for seeing me (i.e. doing his job).  Bus drivers, I could never love them.
Back in the Chelms, time to squeeze in a tick as my final village bus is an hour away. 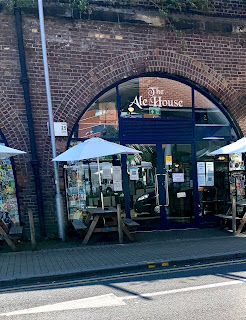 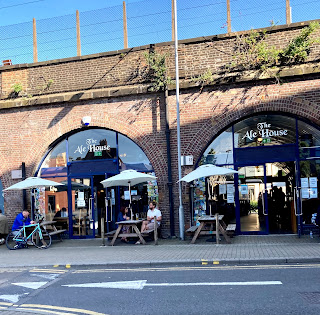 The huge gleaming glass double doors and under the railway arch setting hardly had me purring at the prospect of entering the Ale House, Chelmsford (1791 / 3220) but the southern BRAPA Twitter following are rarely wrong, and if there was one pub this weekend that everyone told me they enjoyed, it was this.  And it was easy to see why.  Such a calm, still, easy atmosphere.  Such welcoming staff too, when they smiled, little stars appeared from their eyes and little love hearts from the corners of their mouths, or at least that is how I remember it.  A beer menu, ooh la la, well this is a PROPER beer place so I manage to bag my second mild of the day, and the month of May, this one from Fell up in Cumbria.  It travelled well.  And for a proper beery place, you never felt it being rammed down your throat like in some places.  Live and let live was the atmosphere, Colin was treated with the respect he deserved, and most of the other drinkers were elsewhere so I could stretch out a lot more than in the previous pubs today.  Replace those doors with blackout ones made of human skin like that place in Bristol, and I think we talking 10/10. 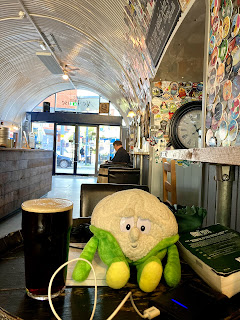 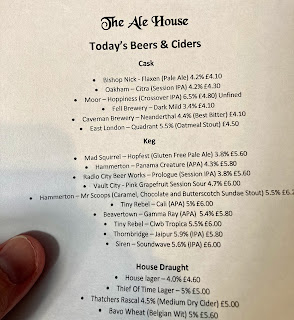 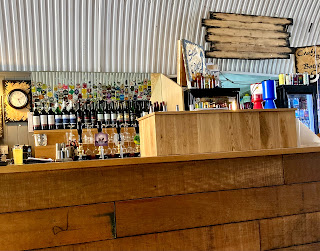 Join me tomorrow as we limp towards the end of a very productive Bank Holiday weekend in Essex, with one good one, and one rubbish one and a lot 'inn brief'.
Si