Chelmsford seemed pretty wired tonight.  It had cigarettes where there were supposed to be eyes.  Girls stagger out of a club, the one on her mobile phone cries.  They're soon surrounded by revving engines.  The boy racer guys.

And here was me, a sober little church mouse.  Trying to salvage something from one of my worst train journeys in living memory.  I'd left York at 5:30pm.  Or that'd been the plan.  Two cancellations later, we finally limped to Doncaster, to Newark, maybe even Grantham.  Before the announcement.  "We'll be terminating at Peterborough .... need to travel onwards to London?  Yeah, good luck with that suckers!"  But I paraphrase.  It was akin to putting down the ailing 15 year old family pet.  In one sense, a relief, but still utterly heartbreaking.

My mood remained chipper largely due to the positivity around me.  My carriage was full of young Americans, on their way from a boarding school in Edinburgh to see their parents in London.  Each worsening of the crisis brought new wide eyed looks of wonder.  Like "Dude, I'd heard about this famous terrible British transport system, but now I can witness it first hand."

Just when you thought we'd reached peak-farce, and I'd been sat on my rucksack in the vestibule as we spent 33 minutes awaiting a Peterborough platform to terminate on, planning an elaborate trip around the Fens and down via Colchester, a further announcement.  "We won't be terminating after all, onwards to London!"  We retook our seats, there were sighs of relief, a smattering of laughter, even a ripple of applause, like what dickheads do when a plane lands.  30 minutes later, we chugged slowly onwards to London.

And here I was, Chelmsford.  10:50pm, Friday night.  Checking in swiftly at the Premier Inn.  And now marching through the dark, scary streets.  Seeking out a pub not closing til midnight, under an underpass, over a busy road.  This is what pub tickers do. 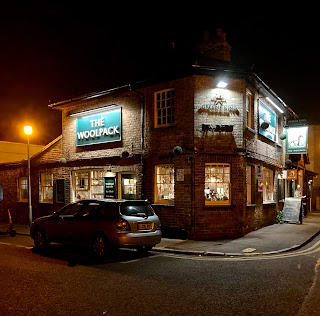 My saviour, and I will be eternally grateful for the Woolpack, Chelmsford (1781 / 3210).  A giant of a bloke lurches out of the shadowy smoking area, voice like a brillo pad, tattoos from head to foot and back again.  He could appear intimidating in other circumstances, but he takes me under his wing, helps me 'sign in', sits me down and leans across the bar, telling the staff that I require a pint.  Fighting to shout over the background music, I ask for the pale.  I get the porter.  I ask to pay by cash.  They bring over a card reader.  There has been a live gig here.  But as I glance around the room, it isn't so much last night of the proms, as last night on the Somme.  Floppy limbed bodies strewn around.  Some shout, some laugh, some wail, or is it bad singing, cackling and cheering?   Every noise you associate with a triumphant Friday night scene.  It would be utterly great if I wasn't sober.  I seem to be drinking quickly, nervously.  I'm conscious a lady is looking at me.  Her friend can't focus.  I'd like to call them cougars.  They are more Waynettas.   I'd recently witnessed her screaming 'eff off' in another friends face so knew she was a 'character'.  She asks if I want to join them.  I tell them I'm ok.  Thrice.  It might've made better blogging if I'd said yes, If I'd lived to tell the tale.  A group of attractive twenty somethings walk in, why don't ladies like this talk to me, I wonder?  But then one of the older dudes behind me goes "heyyyy laidieeeeez, I wanna knooooow will ya be my gurlzz!" and about two seconds later, the young ladies leave as quickly as they arrived.  It may've been a coincidence I guess.  The Waynettas are gone too.  Last orders.  "Another pint?" says Mr Brillo Pad, appearing again from the gloom, I sit bolt upright, but I squeak I'm going soon.  I feel so lame.  The older dudes have a man hugging session, I glance over at the wrong moment.  "Oh sorry, did I say 'shit' out loud?" One of them asks me from nowhere.  "I meant wankerfuckinghell!" And then he leaves too.  Wow.  In danger of being one of the last customers, I finish my porter and do the same.  What a classic, glad I made the effort, a fine pub. 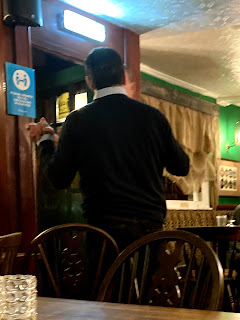 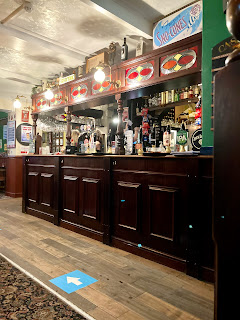 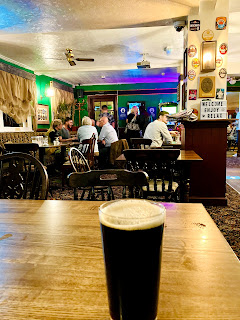 Fast forward to Saturday morning, and I find myself in a town called Maldon.  It is sunny, a pretty looking place, three GBG ticks, but has a bit of a weird smell to it. 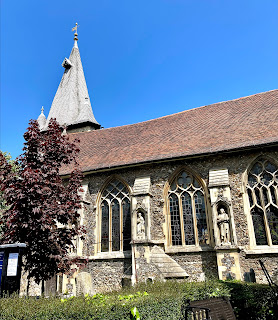 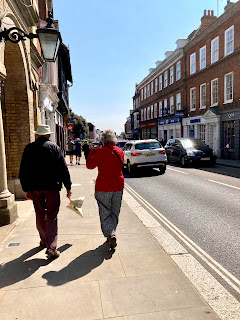 I trundle down the high street, and 'trundling' in the only way to walk around Maldon, as everyone is a one-paced elderly pavement blocking gimmer ready for their inevitable death, but fear not, my early opener soon comes into view: 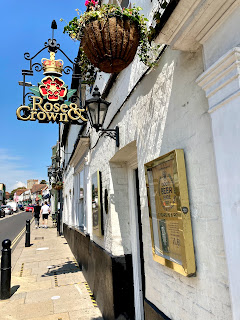 As Wetherspoons go, Rose & Crown, Maldon (1782 / 3211) must be one of the most authentically pubby (though it is a 16th century pub so no surprise!) and perhaps that is why the perspex divides grate a bit more than usual, they seem 'overly noticeable'.  Having said that, it is a pleasant place to have a drink, beams and a bit creaky and uneven underfoot, the 'Spoons App is the one which isn't a headache to use, though Old Hooky might be a bit of strong opening pint.  I eat Colin's Wispa alongside it for added sustenance.  A Dad boasts to his unimpressed family that he has the cleanest shirts in Maldon.  Then he gives his son a quiz of the DLR line.  The Mudchute clue was so utterly dreadful, I think he saw me wince.  A family of Arsenal supporters a bit closer to me order massive breakfasts, their teenage boy clears his throat and says 'would it be outrageous if they ban cars from the town centre?', his Mum, stuck half way between a fried egg and rasher of bacon, makes a strangulated noise,  and I stop listening after that. 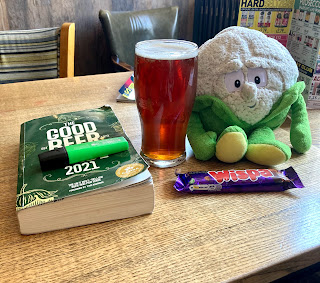 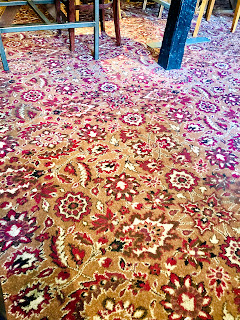 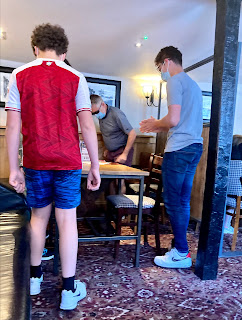 Before I get too settled in Maldon, I want to do some more obscure pub ticks.  That of course, is the benefit of being down for an 'overnighter' rather than the more rushed 'there and back in a day'.

Tollesbury looks to be the 'end of the line' so best to tackle that first.  Buses are sparse, so I decide taxi one way, bus the other, is the best compromise.  I've seen a taxi rank close to the 'Spoons (as they so often are) so I jump in, and as luck would have it, the bloke grew up in Tollesbury so I get a potted history of the area, and he seems to like BRAPA as a concept.

I first notice the pub looking pretty shut before I've even exited the taxi!  I think he notices too, but it doesn't stop him grabbing my dosh and speeding off.  12:05pm, and not a sign of life.  Uh oh! 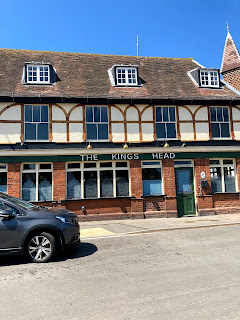 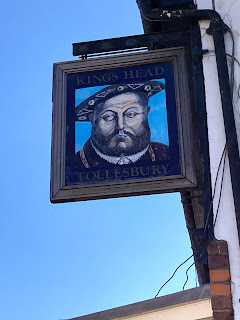 I see a smiling old couple at the bus stop.  They look local, as they have teeth growing out of their faces at weird angles.  I ask, and they tell me the pub has decided "they will probably reopen within the next few weeks".  NOT that they've put this on any social media, WhatPub etc etc.  SHUT PUB ALERT - as we say in the trade.  They tell me my next bus back isn't for another hour.  Phone signal next to zero.

Oh dear!  What to do in Tollesbury til then?  I walk out towards the salt marsh coast and have a read about their world famous salt. 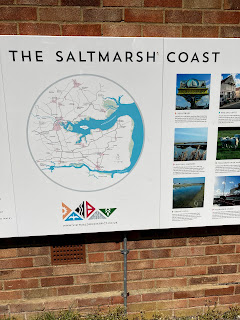 They have public loos too, which helps after the Old Hooky.

In the other direction, I encounter some ducks swimming in a lake just beyond a fence.  I stand with a lady and her daughter looking at them.  Then to our horror, the bushes rustle and this emu/ostrich appears! 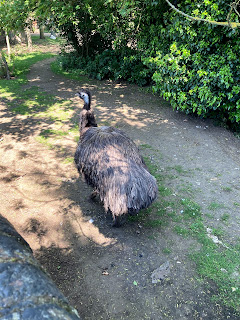 Back in the village square, for a second I think the pub has a light on.  But it is just the sun reflecting off an awning.  Oh well, the bus is here, and when the driver has finished his cigarette, I can jump on, bound for Goldhanger, where hopefully the day can get back on track.