Now that I look back on it, this next three pubs was really the determining factor in whether my aim to fully complete every Surrey GBG pub in the 2021 edition would be a success.

Back in that hot summer of 2020, all three had me walking away disconsolately.  The first, I even ordered a pint before being told 'no room at the inn'.  The second simply refused to reopen at all, almost a month after the 4th July grand reopening.  And the third should have been open at 4pm on a Sunday, but was dead to the world.

Oh yes, I had unfinished business to attend to.  And the 'mild peril' was ramped up to 11 as my train from Guildford out to Dorking was delayed by a good half an hour, forcing the hard nosed coffee drinking couple in the waiting room to re-evaluate their decision to go into business together.  I smiled sweetly from behind my mask and mini cheddars, but it didn't seem to help.

Dorking is for me, the ultimate Surrey town.  A buzzing hive of activity at 12 noon, always asleep by 6pm.  The inhabitants walk around with confused expressions, like they never really realised life would turn out like this, but if you smile at them, they will smile back.  It is more real than the often plastic Reigate, it is more palatable than Redhill, and you are less likely to have a mad stranger jump out from behind a bush naked and lick your face than you are in Guildford. 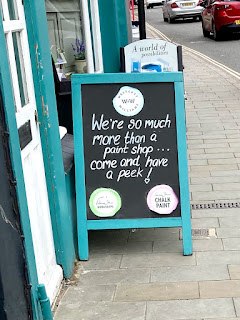 Our first pub had been open an hour or so as I approached.  I knew the drill from last year.  Enter shop at front, stare at beer board like you mean it, and make it crystal clear you want to sit inside and have a pint! 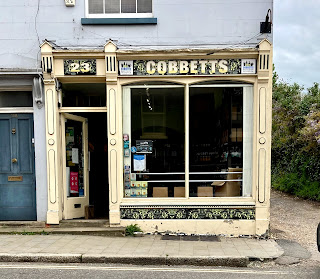 Cobbett's, Dorking (1763 / 3192) , such a sense of relief as I'm taken through to this secluded back room with a few benches, pump clips adorning the walls, and an outdoor loo door banging in the wind like yer Uncle Jeff.  I recognise the guy from last year, less stressed and sweaty, equally loud and friendly, not often you can warm to someone who turns you away from a BRAPA tick, but I'll make an exception for him.   I go for some strange collaboration brew, but they don't call it that, it is actually a 'Collusion' at 5.2%, pow, it hits me with the full force of whatever hops they put in it.  Ask a beer blogger.  I'm here to talk about the loos and shit (not literally shit).  He gives me a detailed tour of the ales, I nod like I understand, and a younger chap who is paler, thinner, and seems to live in the cellar Fritzl daughter style comes over for a very nice chat.  Some more customers appear, a couple.  Local?  Were these the baaaarstards who had the final seat back in July and thwarted me?  I glare through the wall to be on the safe side.  Their stand out comment "We've never been to Redhill!"  What?  How?  This reminds me of everyone old I met on the Isle of Man who kept saying things like "I've never been to Ramsey, there's no need!" when they've lived in Sulby  for 75 years.  Blows my mind, as a UK wide pub traveller.  Then, a stranger comes in and throws the atmosphere wide open.  "Do you have any dark bitters?"  he asks.  The only time the pub paused for silence in my 30 mins here, a silence that seemed to say "mate, can't you keep it simple and ask for a pineapple DIPA?"  My favourite feature though, and sad I left my phone on the table for photo purposes, the atmospheric outdoor loo.  Ever watched the Round the Twist episode "Skeleton on the Dunny"?  It was like this, with craft beer.  And after my earlier scary scarecrow exertions in Haslemere, today was turning into Round the Twist themed heaven. Nice little place this, a beery but a goodie. 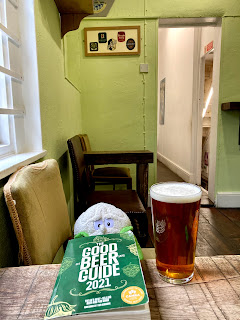 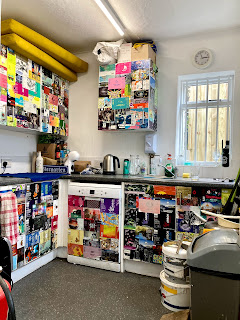 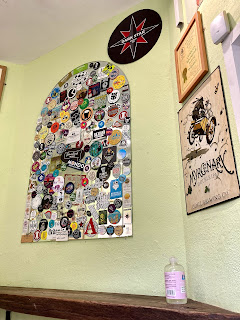 Whilst I'd been enjoying my Cobbett's experience, a significant Dorking pub 'happening' had been taking place.  Yes, my next pub was opening for the first time in 2021.  It had been open about half an hour as I strode up to the front door.

Back in 2020, it hadn't opened 4th July and was still not open by the time I left Surrey in early August.  For a Fullers pub, it seems to like to take its time.  But good things come to those who wait, and sometimes those good things are VERY good. 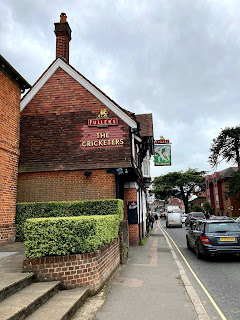 It seems that I wasn't the only one highly anticipating the reopening.  As I arrive, the pub is nicely busy (not heaving, but enough room), and the atmosphere is a kind of 'celebratory welcome back'.  In case I'd forgotten it was Fullers, they've wedged a little reception desk a little too close to the doorway, so I'm forced to step back into the porch until they are ready for me.  A thoughtful young lad with the same hair line as me and a pleasant demeanour has to therefore wait in the rain for fear of squashing me.  I like him, and his hairline.  But this 'false start' is where any similarities between this and your more average Fullers house end, I sit down, plenty of watchful eyes on me, and immediately realise the Cricketers, Dorking (1764 / 3193) is a classic.  The celebratory atmosphere feeds perfectly into the gentle mid afternoon hum of a historic boozer like this.  I even get an elusive pint of the American Dark Star I'd just missed out on in Hammer Vale.  Even better, an old couple in the far corner on the same table as 'Si Hairline' are drinking ESB.  Out of the bottle.  This is why I love pubs.  Sitting on high stools above me, a group of jolly old lads watch as I highlight the GBG with my green highlighter.  "Wahey, what is the green man doing?" They ask.  My reply piques the interest of a table at the far side too, and soon am explaining BRAPA to the whole pub.  How life should be, maybe.  I feel so comfortable, I'm even brave enough to ask the two barmaids the question that has been nagging me throughout.  "Are your matching mustard jumpers a coincidence or a deliberate choice?"  Turns out they are a coincidence, I'm not even the first to ask.  I tell them I probably won't be the last either, and depart with a laugh, hop, skip and jump.  Pub of the week?  Probably. 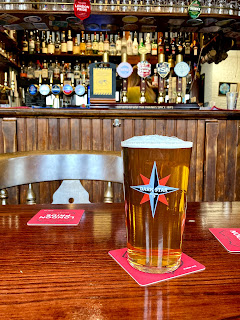 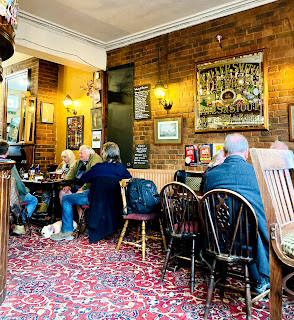 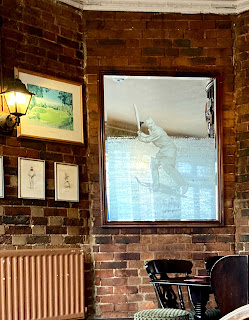 Dorking complete!  I never thought I'd see the day.  Now to tackle Reigate where I also have two pubs remaining, the first of which I'll tell you about now.

The Pilgrim Brewery Tap Room had done me proud last summer (top staff), but otherwise I found the town a bit of flouncy damp squib, as I stood on a corner eating a scotch egg (before it came fashionable for about a month!) opposite a weird looking pub called the Market Stores wondering why on earth this pub wasn't opening.

We were past the 5pm witching hour, hopefully second time luckily.  And I was relieved to see it open this time ..... 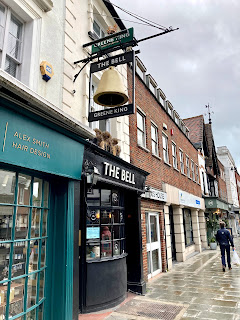 Small fronted, opening into an obviously ancient, creaky long thin room, I cannot really describe why I disliked the Bell Inn, Reigate (1765 / 3194) so much, but just 'ugh!' there was something really not quite right about it.  Perhaps some of it was the 'Cricketers hangover', a lot of it was the staff (cliquey, the two guys trying to impress 'the new girl'), music that didn't fit, just the whole place felt very fake and the customers seemed to be totally incidental to the whole piece.  A tough one to describe really.  The fact that such an ancient pub prides itself on a gleaming centrepiece of a humongous Corona Lager font just made me think the Bell could really be making more of itself.  I'd been seated very close to the bar, as were most people, and when Kind Roy Hodgson (KRH) dropped his change, apologised, and scrabbled around on the floor for 10 minutes, bumbling something about Wilfred Zaha, it was the only instance of humanity I witnessed, and with bus times as they were, I had to nurse my admittedly very well kept pint of Pilcrow.  More outdoor loos, but that couldn't save the experience, and in the end, I was happier to sit on the street and wait for my bus exchanging awkward glances with a Home Bargains multi-bagged mother of five, rather than stay in that strange oppressive atmosphere! 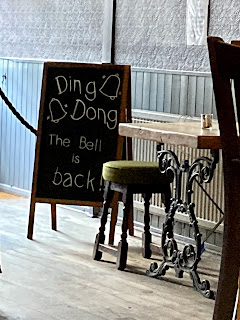 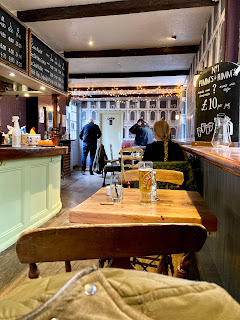 So that was a mixed bag wasn't it?  I will see you all probably on Wednesday for part 9 unless I get an energetic creative spurt on tomorrow, but am meeting my mates at a York pub so probably not.