The pub ticker equivalent of Christmas Day is almost upon us ..... yes, that day when the Good Beer Guide is pushed through the tight letterbox, a bit like the birth of baby Jesus with less beard and afterbirth, and the three wise men whoop and holler, brandishing the scalpel (stanley knife) to cut away the umbilical cord (brewery section) and give it that first mother's milk (green highlighter ink).

But unlike Christmas Day, which falls with an alarming regularity on 25th December, we just don't quite know when the GBG will hit.  And that puts me on edge.  I feel like I can't make any plans!  So I thought I'd try and use 'history' to work out the day it'll arrive this year.

So join me, on this, perhaps my most pointless blog of the year as we look back on what has happened in past BRAPA years, to help extrapolate the data that'll give us the date (or something incredibly scientific).

In the debut year of BRAPA, it wasn't until June til I thought "hmmm, may as well become a CAMRA member I s'pose if it'll help me get into clubs and get me money off 'Spoons visits".   And by July, I stumbled across this 'Good Beer Guide Privilege Club' where you could receive it ahead of the official release date.  "Yes!  I need that extra advantage, I want in!" I declared.  Nobody was listening.

But I'd missed the cut off point with regards setting up the direct debit so couldn't join the scheme til the following year.  Nooooo.  I'd just have to wait for official release date like all the norms.

It didn't stop me being highly motivated in my efforts to pick up a copy ASAP.  On Sat 13th Sept, I careered around Oxford Waterstones all wide-eyed and blotchy faced,  practically shaking the staff and asking what the hell is wrong with them.  Thankfully, a local news article told me what was in  the new GBG for Oxford to help me out a bit.

It was the following Thursday (18th), on day two of York Beer Festival, when a bleary eyed hungover me picked up a copy early afternoon whilst trying to drink a beer beginning with every letter of the alphabet (I was looking for a Q at this stage).  I sat outside to read it but a weird couple in a travelling band from Wath on Dearne decided they wanted to read it with me!

Conclusion - I learned bugger all from this debut year.

So my first year officially in the 'Privilege Scheme' then, or so I thought......

For on the evening of Friday 28th August, two local CAMRA friends (John and Christine) texted me almost simultaneously to say they'd got their copies, and had I?  I hadn't, and was midway through planning the following day's pubs in villages north of York.

Noooo, where was my copy?  I messaged CAMRA like 'Wot da fuq iz wrong wiv you bitchees?' (I didn't quite word it like that) and I got a very quick response, explaining that due to some direct debit hacking incident over the past year, my details had been removed and not reset so they'd send me a copy post-haste!  Which they did to their credit.

In the meantime, in what remains one of the most selfless acts in BRAPA history, Christine passed her copy to Dad at the Hull City game the following day (we beat Preston 2-0 if you care) to give to me at a family barbecue on the Sunday so I could still make something of a head start!  Bless 'er.

Conclusion - Glimpses that an August arrival is possible.

"This time, I can't fail!"  I felt a bit like Dick Dastardly talking to Mutley before a big race, in the build up to the 2017 GBG arrival.

I'd met fellow ticker Martin Taylor by now, and we were both in the same boat, and what a frustrating boat it was to be in!

By the late 20's of August, Londoners were all over social media like pissing puppies with big gobs, despite the disclaimer slip of paper contained within the GBG stating "please don't reveal contents until the mid Sept official release date".  They'd got their copies but cared not a jot for confidentiality clauses.


But if the Guides hadn't reached the Fens, they certainly hadn't reached York and I was moaning on my blog on 31st August about it, yet had it with me for my trip to West Berkshire on Sat 3rd Sept.

Conclusion - It must've arrived either Thu 1st or Fri 2nd Sept.  But after what should have happened in 2015, this felt a bit of a disappointing effort from the CAMRA gang.

On the morning of Saturday 26th August, I arrived in Chester for a day of Cheshire pub ticking not really expecting the GBG to rock up this early, when the BRAP phone started glowing red with calls and messages and rumour galore.

Martin had no idea what was happening as usual, but Christine in NE Lincs again had hers, and most significantly, up in Poppleton near York, my friend John had received his copy!  "Can you send me the pubs listed in and around Chester?" I pleaded.  "I'm on a coffee break mid gardening, so I'll have to be quick, but I'll give it a go" he replied.  Good man.  Now I knew I had to go to weird places like the Goat & Munch and the Mill Hotel.   What drama, I was already halfway down a country lane to Childer Thornton, which luckily, had kept its place.  Phew.

In one of the more fantastical rumours, a bloke called Mackay I was now aware of was ticking in Glamorgan, but somehow seemed to have summoned a copy of the GBG to his inner self (#PubMan)  Yet, he was just departing for Reading Festival as all this was going on, so did he take the GBG as part of his camping equipment and tick whilst watching Bjork and Enya?

Later that night, at the end of a long day's ticking, I sat in York Tap nursing something overly hopped from Bristol, hoping the GBG would be on my doorstep.  I saw a strange insect which would certainly have been squashed by idiot Twork drunkards, so I took it outside to freedom.  And as Karma, the GBG was indeed waiting for me!

Conclusion - Sat 26th Aug, best yet and I'd say a good effort from the CAMRA here.

We can't learn anything from last year's debacle.  A printing press disaster meant just as in 2014, I had to receive my GBG on official release date which I believe was Fri 14th Sept.  I was doing some 'after work' ticking in Hyde so didn't see a copy til I got home in the early hours of Saturday, but at least the crummy GBG App had updated, so for once, it came in handy, telling me I should ignore Godley but go to some weird dining thing called Joshua Bradley, so it wasn't all bad!

Conclusion - Will this mean CAMRA are ultra 'on the ball' in 2019 to compensate for the '18 disaster?  I can only hope.

I therefore think Fri 30th Aug is a decent shout, cautiously optimistic perhaps, but certainly Sat 31st Aug is perhaps the most likely.

Anything later would be a bit disappointing, Mon 2nd Sept or Tue 3rd Sept I could both envisage, I'd only be vaguely miffed.  And anything later, would be getting silly but who really knows!

If you read all this, thanks, sorry if a bit dull! 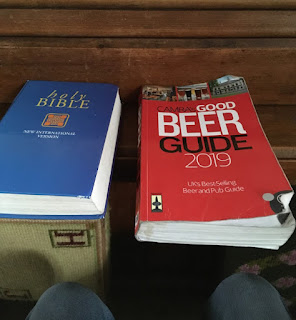