It took me so long to fathom out which bus would actually take me to my fourth pub, it seemed easier to just walk.  After all, it was only a couple of miles out of Bolton town centre.   And besides, after the rigours of the Elephant & Castle, a walk and some (fairly) fresh air would do me good!

Chorley Old Road is a road I find myself meandering up and down about once every seven years or so, one of those roads so long and straight and generally desolate, that after a while space and time cease to exist and you can just hear a death rattle on the wind.  It is a bit like Chorley New Road, but older.

On the way, this dude in a sports car winds the window down, puts his music on full blast, plenty of bass (not the beer) boom boom boom and does this crazy car seat dance AT ME.  I put my thumbs up encouragingly, and he does it again.  I walk off quickly.

But today for the first time ever, there was a purpose to Chorley Old Road.  A micropub in what felt like a rather unlikely location ...... 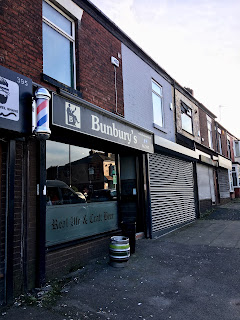 So it was perhaps no surprise that Bunbury's (1741 / 2714) had a quite unique, other wordly quality.  I've never read Terry Pratchett or finished Lord of the Rings, yet I guess it is similar.  A bit like a cross between Game of Thrones and Last of the Summer Wine, with fewer boobs but more dragons (JOKING!).  Almost like a parlour, and a shame that lovely Twitter man Chris Spinks wasn't in on this early Saturday evening.  Problems beerwise though, of the two ales on, one was Jammie Dodger and one was Tutti Fruitti Milkshake.  'Gimme the blandest thing on the menu' I was tempted to say Goodness Gracious Me style.  I went Tutti Frutti Milkshake (try saying that in a manly northern way!) as it was the weaker percentage. "Good choice, less sweet that one!" said a kind old man next to me, and as I scanned the room, a BRAPA estimate would put average age of clientele at about 114.  To be fair to the staff, a sweating lady returned from the bowels of the pub, looking like she'd just been birthed.  "I've had enough now!" she said to the other woman.  Seemed she'd been putting a third beer on, and something had gone wrong. And I bet it was a standard one.  Still, amidst the most timeless atmosphere I've witnessed in a micro, I relaxed (sort of) into my Tutti Frutti, noticing just how many cans and bottles were behind me.  A ruddy faced gurning man who smelt strongly of weed (not wee) groped around my ankles to choose, what I'm sure, was a bottle of wine!  Could've been mistaken.  A couple of dogs on neighbouring tables started bonding, and I fell into what can only be described as a 'Bunbury's Reverie'. I came around about 15 minutes later.  'Shitttttteeee!' I thought, the bus was due.  I gathered up my stuff and ran, a bloke was outside vaping.  "HAS A BUS JUST GONE PAST?" I cried.  "Whaaaat?  Bus stop?  It is just there mate!"  Arrrghhhh.
I knew this pub had timeless qualities, an understated gem. 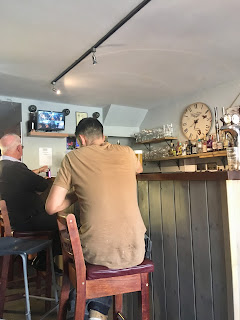 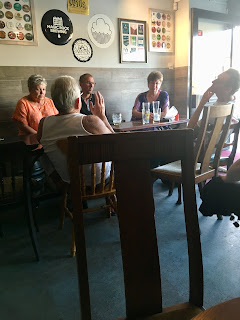 I was thrilled to see, not two minutes later, the bus approaching in the distance.  Phew, had it been on time, I'd have been screwed.  For once, local bus tardiness had worked in my favour.

Onto Horwich then, where we seemed to somehow get ahead of time for we'd well overshot the 'Bank Top' bus stop when we got to the scheduled time and I was further on than expected so hastily pressed the bell.

I've been to Horwich twice before, both on bitter biting winter days before Hull City matches at Bolton, and in that time I've done the Crown twice (much better the second time), the Original Bay Horse twice (which Dad loved) and Victoria & Albert, which was good in 2013 but today, looked like some bloody fun pub!

My next GBG tick was hidden away behind the Bay Horse, I missed it the first time, but it wasn't exactly small, just well off the road ........ 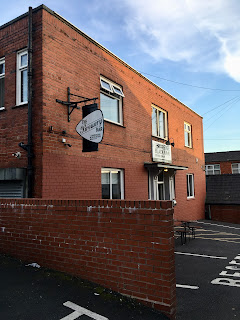 I must confess, on entering Brewery Tap, Horwich (1742 / 2715) I wasn't expecting much.  A sterile downstairs sort of reception area, where the bogs were, led up to a main bar, and I've been in so many Brewery Tap's that are quite bare boarded, metallic, cool and clinical, that I was fully expecting more of the same.  So imagine my surprise when I ascended the stairs to find a cosy, homely, effortless bar area.  I actually said 'ohhhhh, niiiiice' under my breath in a New Zealand accent I didn't know I had.  And do you know what made it?  Rugs.  Three of the things.  It might sound silly to say, but in the absence of these rugs, I don't know how much I'd have enjoyed it by comparison!  Everyone knows (or should) that carpetted pubs are best.  You can't have too much carpet in pubs.  I like those where they've obviously ordered too much so it starts to crawl up the walls.  Carpet the walls, that's what I say.  Rugs are like carpets, with gaps.  You didn't need me to tell you that, even if you are Canadian.  Staff seemed highly motivated and enthusiastic to be here, eye contact and smiles throughout.  It was excellent service, and the Blackedge beer (not a brewery I'm familiar with) was wonderful.  No wonder this is local 2019 pub of the year.  Classy is how I'd describe this place.  And it would've been highly uneventful, but for the cavorting galloping arrival of one man in giant headphones.  Jeez, talk about making an exhibition of yourself?  Puffing and panting, "gimme a pint of water before ANYTHING else!" he squealed in theatrical tones, before downing it in the centre of the room.  He was willing someone to ask him why he was out of breath.  No one cared.  He was like if Russell Brand remade Cliff Richard's Wired for Sound video.  Now that is scary.  Another must visit this place.

One pub to go, and I must confess I was feeling a lot more clear minded than I often do at this stage of the day.  But after recent back pains, I've been keeping more hydrated, and add that to a Wigan pie, I guess I'd everything I needed to stay sober!

So a bit of a shame this last pub was a bit of a blur, the photo a bit blurred as I took whilst crossing the road with a lorry steaming towards me ..... 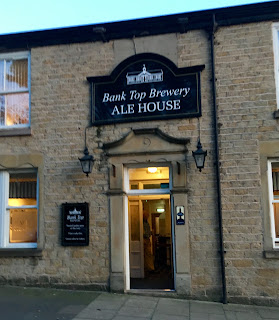 I'd visited a Bank Top Brewery Ale House (1743 / 2716) before, a short bus ride from Bolton but am sure it wasn't in Horwich.  But like that, is was very much a classic locals pub rather than anything brewery bar-like.  I ordered a 'Bad to the Bone' cos the Grim Reaper on the clip kind of summed up my current end of day mood, very nice it was, and I took it around a corner to a cosy alcove where fellow typical friendly Bolton area drinkers looked at me in that sympathetic way which I now associate with final BRAPA pub of the day.  And final BRAPA pub of the ticking year?  Well well well, all depends on whether the coming week can produce my 'privilege' copy of the GBG.  I'd say not before Friday but who knows, I'll be sitting beneath my letterbox waiting for the plop, so to speak.

Back at Manchester Victoria, I was frustrated to see an hour long wait until the next train to York so asked Whatpub what my nearest GBG pub was.

It told me Angel, a pub I'd been meaning to get back to since my official BRAPA visit on 6th May 2014, my 35th birthday, before Giggsy's record breaking game v Hull City, and a full one month and one day into BRAPA.

On that daytime, it had been superb with free asparagus quiche, a man playing Billy Joel on the piano, and a 'street worker' telling a local bloke she was a bit tired of his attentions.   Wasn't quite this lively tonight, but the gentle old fashioned music, good Roosters ale and a nice chat with the barman about the perils of needing to have cash & card on you in this day n age in case a pub is 'one or t'other' made for another heart warming session.  Some Twitter pub experts have suggested it might be a bit tatty, but I think it is 'controlled & knowing in this respect' ..... I don't wanna use the term 'shabby chic' but something approaching that.  I'm a fan anyway! 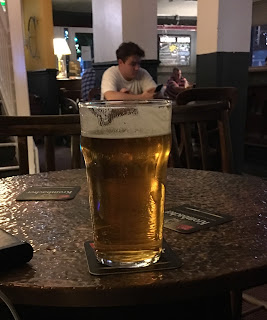 All in all, a highly successful day.  No more bank holiday wanderings for me due to the heat mainly, so here I am with sister and her disturbed looking boyfriend for an impromptu pint in York's excellent Slip Inn ....... 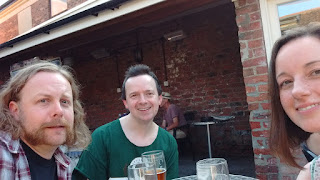 A good end to the Bank Hol.  I won't get a Tue/Fri trip in so a rural Saturday with good ole' Daddy BRAPA will mark the end of August ticking, new GBG or not.