BRAPA in .... Travels With My Tand : Stuck in the Middle-ton With You

Another Friday night pub ticking in Greater Manchester, and it was time for a highly anticipated trip that I'd been planning in my head for at least three years, Middleton with a twist of Castleton.

Beer Twitter legend Tandleman ("calling me Peter will be fine!") had kindly agreed to drive me around his local haunts, just like Quosh did two weeks ago.  Peter appeared at Castleton station car park on a fine summer's evening, and greeted me with a warm smile and firm handshake, and we hopped into his sporty car and were soon avoiding pot holes galore down one of the craziest pub lanes in the GBG.

I was glad to note that he really IS Scottish.  I'd always assumed it was an accent he put on to intimidate weaker willed Oldham, Rochdale & Bury CAMRA folk into letting his favourite pubs get in the GBG.  Furthermore, he presented me with a CAMRA carrier bag containing a JW Lees glass (the one with the hand grip), a can of Moonraker (which I'm having tomorrow in the sun!) and an oversize JW Lees shirt of beautiful green.  I have made it more 'punk', customising it so it now fits.  I'll wear it tomorrow.  What a gent!   Made me realise Quosh should've given me a goodie bag containing a tee shirt with the slogan "Make Shore to Flush", a severed finger end, and perhaps a bit of shit stained bog paper from Legendz.

Nestled in between farms, with the pungent smell of silage in the air, this was quite a surprising location for a pub.  Almost up there with the Anchor, Anchor for remoteness, but not quite!

So it did kind of amaze me how many people tell me they have been to Tandle Hill Tavern (1734 / 2707) , a sign of quality surely, and once inside, it was everything I was expecting/hoping it would be with a very soothing rural farmhouse pub feel.  "Bloody 'ell, Peter Alexander 'ere on a Friday night, what do we owe the privilege?" croaked the local blokes as one voice, for everyone knows Peter around here.  Of course, that meant BRAPA kept having to be explained but you know, I'll bore folk with it all day given half a chance!  A few bar blockers made getting served a bit tricky but we were soon on the Lees Stout which was less than £3 a pint, easy, and slipped down astonishingly well.  I commented how great the quality was, Peter said it's actually often better than this.  Wow how is that even possible?  I should've had it topped up actually, but I said no cos I thought it might be the kind of initiation ceremony for newbies where locals expect you to slurp through a couple of inches of froth!  The landlord seemed keen to show off his bell (so to speak), he'd hung it up by the front door so it jingled when anyone walked in.  '"Why?" I whispered to Peter who told me the guy gets bored and likes hanging stuff from the ceiling to amuse himself!  This level of 'quirk' I can appreciate, and if this first pub was anything to go by, it was going to be a very promising evening.


Back down the bumpily upsetting Thornham Lane (I had piles next morning), we were spewed out t'other end and were soon in 'Middleton Proper', a much bigger place than I was expecting.

Our second pub was nestled off the main drag, another pretty location by the church, hence the name.  As we got out of the car, a three person welcoming committee was greeting us from the top of the steps, so I made them get in the photo .......... 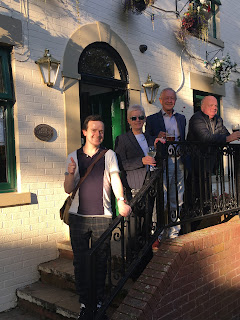 Ring o' Bells, Middleton (1735 / 2708) was, Peter confessed, the pub he probably frequented least / knew the fewest people tonight, but the guy on the right who looks thoroughly delighted to be in the photo and was possibly called Derek was a nice chap, and told me that being from York, I'd find it weird that I didn't have to pay £6 a pint!  Wow, I knew York prices were steep but not quite this bad, unless a fan of drinking murk on Little Stonegate, but he didn't look the sort.  The owner bloke who Peter knew wasn't around as he has a Winnebago he parks round the back and often spends his time chilling out in.  'Twas another John Willie Lees pub so we went for the Lemon Radler, from the Boilerhouse (more on that later), it was decent but very lemony after a bit! We sat over to the right, observing the old school 'living quarters' situated in stairs going up from the bar and all in all, it was another excellent traditional old boozer even if no crazy BRAPness happened.  In fact, rare praise must go to a pub baby, so quiet, we barely noticed it existed til we were leaving and I can't impress upon you how rare that is! The three folk on the steps outside were still there, so after another little chat, we said farewell and hopped back in the Tandwagon, ready for pub three. 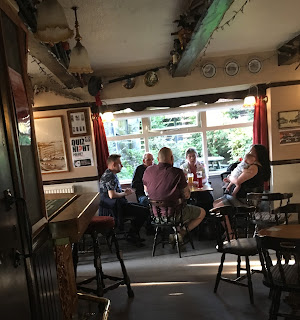 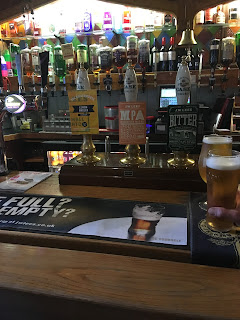 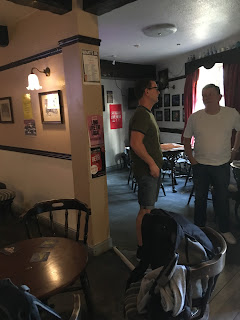 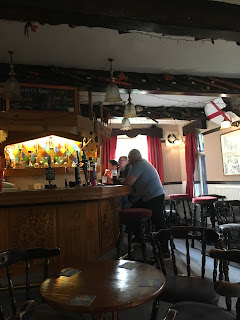 We were making good progress, so Peter took us the 'scenic' route to our next pub, well a diversion so we could look at JW Lees brewery.  I looked at it, felt impressed by the history and size of it and hoped it'll be here, untouched, for ever and ever and ever!


We then went around these housing estates where there were some 'interesting' looking pubs, one stood out for me with a low roof and lots of toothless people in vests outside looking mean.  It seemed pure BRAPA theatre, but at the time, I was kind of glad the car didn't conk out and we continued to our chosen location.

This next pub too, looked quite estatey, vast, a bit foody family and looked like it was built on a traffic island but I'm pretty sure it wasn't. 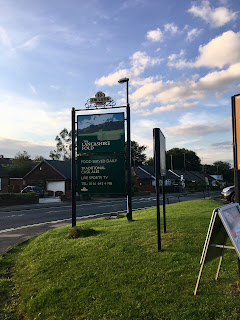 And I was welcomed into the Lancashire Fold (1736 / 2709) immediately as Peter spotted three guys he knew perched on stools, all wearing checked shirts just like his which is obviously the 'Middleton de rigueur' (I just wish someone had told me in advance).  We went to get the drinks, another Boilerhouse one 'Craft Pale' this time and excellent it was too.  One of the blokes mysteriously left (he'd perhaps read my blog before) but the other two were called Paul.  One of these was Paul Wood, a famous JW Lees brewer who has done more brewing than any man on earth or something (Roy Castle would give him an award if he could) and even though he officially retired, he still breaks into the brewery in the dead of night to work in his spin-off Boilerhouse brewery, and now we'd had two of his ales in the last two pubs!  He tried showing me photos on his phone, but it was just shiny metal containers.  I tried to look interested, but Peter says "Si isn't interested in brewing, he just likes drinking the stuff!"  I couldn't deny it.  But I did have a burning question for him.  What was it like when they were featured on Most Haunted back in the golden age of Derek Acorah?  He told me all, my fave bit being when he asked Karl how on earth he puts up with Yvette Fielding!  Classic. Well, aesthetically speaking, probably my least fave of the pubs, but the company and beer and general lively Friday night atmosphere made it some ways, the most enduring memory of my Middleton visit. 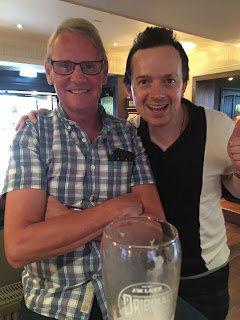 So it was back to Castleton where the night had begun for my final tick of the evening.  Frustratingly, just a couple of years ago, I'd been here to tick off the *cough* GBG deserving *cough* Blue Pits Inn, and then this one popped up just a few doors down.


We walked into the Old Post Office, Castleton (1737 / 2710) and though I am often suspicious of the good ole' 'Micropub, this had a warmth and character to rival your most traditional inn.  First impression helped by the lovely smell of hot food (curries, corned beef hash) in giant silver serving dishes at the end of the pub.  Peter was greeted by who I think turned out to be the owner, a glorious friendly small rounded chap in a brilliant stripey green shirt I was jealous off, and a tuft of white beard.  He was almost Dickensian, and am not surprised I warmed to the place so much with an owner like this.  Bar blockers of course were a nuisance, so I asked a youngish lad what beer he'd recommend.  "None of 'em!" he said.  I think he may have been someone's son, or I might be making that up, but I guess he's someone's son. (I'm not calling him a bastard, okay?)  In the end, I went for a challenging 5% stout which tasted about 7% but it went down okay all things considered.  Still at the bar, a lady jabbed me in the ribs and said I protested too much, but i can't remember what I was protesting about!  'Twas the end of a great evening, Peter had been the perfect host and great company, and hope to see him again when I tick off my remaining Rochdale/Royton duo.  He even gave me a CAMRA mag to read for that long journey back to L**ds.  Oh, and if you are looking for a pre-emptive locally, get yourself down to the Cob & Coal in Oldham market.  (I've not been paid to say that, honest).

As the Spice Girls nearly sang, "One CAMRA mag became two" when I picked up a West Yorkshire one on just east of Halifax.  Someone had done a quiz, which left me with a few questions of my own ..... 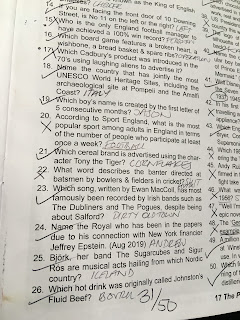 Are they really giving themselves a tick for no. 21? What do they reckon 22 is?  "Shit hurling?"  Think it might be sledging anyway.  And if you spot anything else, comment below please.

Take care, I'll tell you all about 'outer Bolton' tomorrow.....