So where we?  Greenfield actually, climbing up one of the steepest inclines in BRAPA history in the Quoshmobile with our genial host Quosh, and his long standing buddy, Chris Moran.

We'd said farewell to Chris Dyson, but I had a second BRAPA tick to get complete.  "Chris Dyson has taught me more about beer than anyone else I know" announces Quosh, with a glimmer of those pearly whites, a brush of the beard and possibly a tear in his eye, I couldn't tell, it was sunny now. 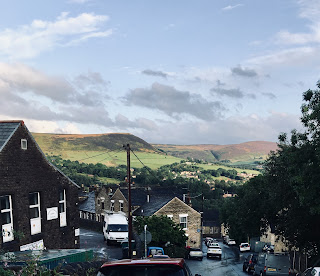 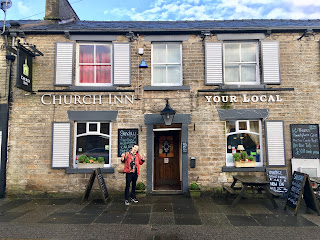 Church Inn (1722 / 2694) and some nice tiling at the entrance.  We were greeted by a very bubbly landlady, one those fearless 'take no shit, misses nothing, this is my gaff' type of ladies, but really pleasant with it, trust me!  More Donkeystone beers dominated the bar.  We all had loved them, but we'd all had enough of them and ordered the one we could see from somewhere else.  No idea what it was, does it even matter?  A red faced local asked for a DPA.  Dukinfield Pale Ale? He'd made it up.  Quosh made sure our barmaid heroine knew he was local by asking about the pub quiz he'd once won and if this bloke was still doing it.  Great thing about hanging around with these dudes tonight, I felt less of an outsider than usual and that is actually nice once in a while.  I walked through the locals to go to the loo cos I'm brave like that.  Not much else happened, then we left.

Back into the Quoshmobile (the car door ridiculous hard to open on the hill we were parked on) and Quosh had another 'pre-emptive brain wave', telling me a tale that sounded vaguely familiar.....

Arguably the best Mossley pub is the Rising Sun.  but it doesn't get in the GBG.  This is because a local CAMRA bloke witnessed an incident he didn't like (something about stairs and a disabled lady I think?) and they've taken umbrage ever since.  And I heard this same story back off the owner of Mossley's Fleece back on 4th June 2016.  Seems that over 3 years later, grudge still going strong!  That poor lady in the Redcar micro who told CAMRA to fuck off has got no chance! 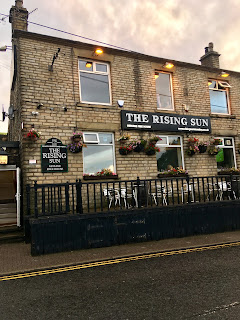 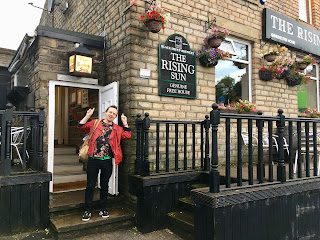 YES IT WAS.  Sorry, ruined the suspense there haven't I early on in the piece?! It was a packed out Friday evening crowd, the floor space littered with laughing jokey people, many of which Quosh knew, starting a theme for the rest of the evening.  Again, they weirdly called him 'Alex'.  We got our ales and were drawn to a tall bloke in the middle of the room, full of hugs, handshakes and exaggerated comedy movements.  A bit like Mossley's answer to Kramer from Seinfeld.  It then got confusing as a bloke who thought I was Quosh asked me to ask this bloke about his sex life.  I was like 'errrm, we've only just met!'.  Huge amazing looking pizzas flew out of the kitchen at a healthy rate, some folk watched Liverpool stuffing poor Norwich and Quosh said "gimme your camera, I'm happy to take photos in here" and got some classics as you can see below (might employ him to take all BRAPA pub photos!)  The best was yet to come as Quosh introduced me to the landlord Richard(?) and what a lovely bloke he was.  He even gave me a little 'behind the scenes' tour past the pizza making lasses in the kitchen, to the beery area.  We asked about the 'not being in the GBG' issue, it'd have been easy for him to slag off CAMRA and say he didn't care, but he showed real class by saying he wished the pub was in, but all they can do is keep working hard, selling good beer and doing the things that make the pub so popular, which it obviously is.  Superb, and let's be honest, it is the GBG's loss, for this pub is a cracker. 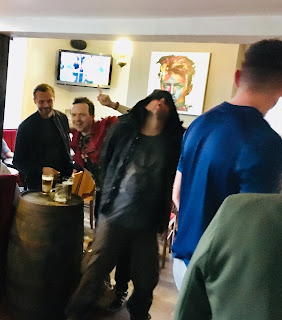 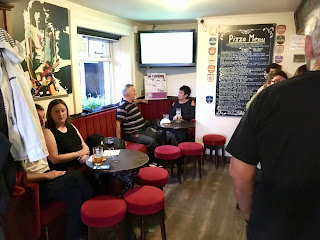 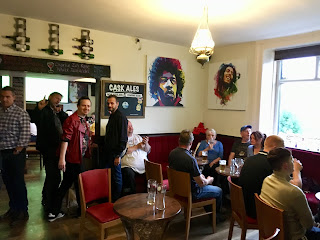 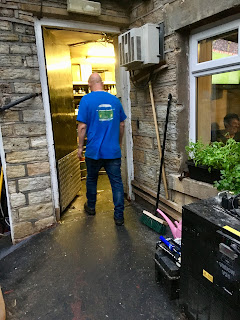 Back at the car, I was happy but a bit bewildered by the whole experience.  "Chris Dyson seems like a very long time ago!" I sighed.  Quosh & Chris laughed and said that would be an excellent blog title.  I just had to remember to write it down.

And things were ramped up another notch as we hit Stalybridge, the town that time (and space) forgot.  So the prospect of going to the infamously 'roughest pub in town' filled me, I must admit, with a fair share of dread, and I've been to Portland.

Chris in fact said he'd taken some friends several years ago, and they STILL talk about their visit to this day.  Where am I talking about? .  Legendz.  The 'Z' is the key feature here. 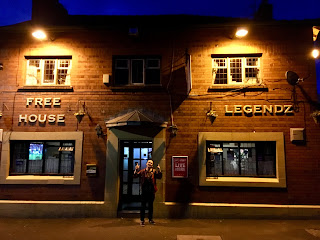 And it is full of local Legendz!  The tales, the folklore, the errrm legends.  Thank goodness I was with two guys who knew the area, I'd NEVER be brave enough to have attempted it alone!  Made me think for a moment of Alan Winfield, and his quest to go in 'EVERY' pub, in some way, the only REAL pub ticker as those in the Good Beer Guide, 99% you know are going to be 'relatively safe verging on cotton wool'.  Got chatting to a bloke at the bar, he liked York and just kept shouting out various 'Gates' in the city, culminating in "WHIP-MA-WHOP-MA GATE!"  He loved that.   Keg only pub of course (hard to real even call it a 'pre-emptive'), we got our lagers in these weird mini test tube glasses.  The pub had a strange Man Utd theme.   The barmaid was quite a legend too, my collar was wonky on my jacket "Come 'ere she says, it is doing mi head in!" she says grabbing me and straightening it out.  You don't get that in a South London Antic, I can tell ya that for nowt.  And then, star attraction and local legend Kev Newton arrived.  He smelt like a nice aftershave mixed with a bit of decaying corpse.  But he seemed a nice gentle bloke too  His teeth were falling out.  His finger ends had dropped off recently, he'd told Quosh.  I looked down, true, some of them had gone!  'This isn't normal Kev' Quosh had told him, but Kev just treated it matter of factly.  HOW CAN YOUR FINGERS JUST DROP OFF?  His party piece was drinking a pint (John's Smooth) in 4 seconds.  Twice I got my camera ready but Kev had finished the pint before I'd even pressed record!  Third time lucky,  Chris took a fantastic video - I'd post it here but videos never work.  Kev used to be able to do it in two seconds, without using his hands, but he said age has slowed him down!  I think a brewery used to pay him to do it or something?!  Anyway, another Stalybridge pub to leave you speechless, even though Chris and Quosh claimed 'I'd got off lightly!' on my visit tonight. 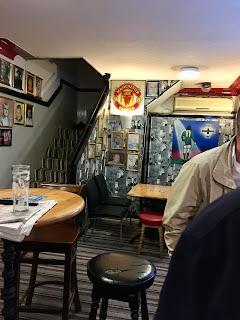 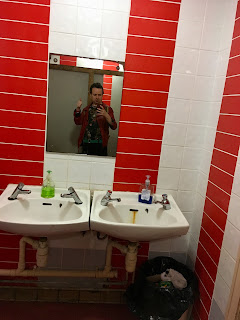 Well, you can't top that but how can you hate Stalybridge?  Never fails to deliver. But not everyone agrees.

Richard Gere once called it "one of the worst towns I've ever visited" but can you really trust a man who is only really famous for sticking a gerbil up his bum just for shits and giggles (and NO, it wasn't a suppository).

You could perhaps say 'well, you can't expect Americans to GET a place as nuanced as Stalybridge' but not true.  In fact, they are sending a delegation of the Southworth brothers, Vanessa Hudgens, Belinda Carlisle, the ghost of Jeffrey Dahmer and Mark Crilley to apologise for their fellow countryman.  They have to spend 12 hrs in Legendz as penance.

I'm supposed to be writing about pubs?  Awwww. I'm wasted on you guys.  And I pretty much was by now as we popped into the lovely but a bit weird White Horse for a swift half.  It seemed pretty normal after Legendz, even if you could put your hand into the jukebox and steal Belinda.

And then it ended as all blurry days in Stalybridge do, at the excellent Buffet Bar.  My 4th visit to this station classic, and I can't remember any of them.  Quosh got a cider, I joined him, but it was too sweet for me.  We met another guy the guys knew, really nice bloke this one, a stand out, even if I can't remember anything he said, did or anything else, just that I warmed to him!  Oh well.  My train was in Quosh says, so just like the time I met him with his bro back in 2017, I ran and hopped aboard the Huddersfield Express.

Oh what a night.  And I had SIX pubs planned for tomorrow, waahhh.

I'll tell you all about that tomorrow night cos I'm having A WEEK OFF THE BOOZE!  (well, 6.5 days).