There were various reasons to be 'beerful' on a rare BRAPA Tuesday outing.  It was pay day.  Dad having 'fun' at Hull City v Blackburn without me.  I was feeling well again after my back pains last week.  Only three ticks in the whole of last week had been a bit lame.

It was time to go for one final push before the new GBG arrives on my doorstep (I'm hoping end of this week, which may be hopelessly optimistic).

I asked my friend who lives locally if she wanted to join me for this one.  Alas, she was watching West Didsbury & Chorlton FC v Cheadle.  Very much the South Manc/Cheshire 2019 equivalent of "I'm washing my hair".

I'd never been to Burnage before and I'm not sure my life was lacking as a result.  Oasis are from here (the band, not the soft drink as Dad thought when I messaged him).  And if you want to make Burnage more romantic, well Quosh told me he knew a French guy who pronounced it in a very French way, you know, like you were saying 'fromage'. Burnaaaaarrrge.

Having consulted work friend and Rotherham's answer to Liam Gallagher, Dave B, about how to conduct myself, I decided to try and swagger into pub one in a 'madferit' type of way (not to be confused with a mad ferret Barnsley folk put down their trousers). 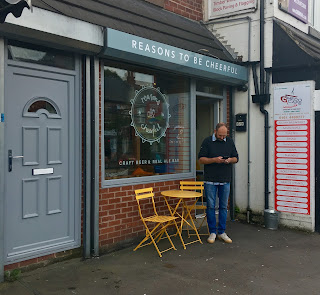 "We do not identify as a micropub .... we prefer the term Modern Beer Cafe" said Reasons to be Cheerful, Burnage (1732 / 2705) via Whatpub, so let us just say, I was raising a skeptical eyebrow from the off.  'Twas a pointless half-arsed Gallagher swagger too, blonde lady barmaid and a few bar blockers looked at me curiously and expectantly as I scanned taps, blackboards etc. wondering how on earth I order a beer in here!  Had I looked a bit more closely, there were three handpumps at the end.  I ordered a pint of Squawk, always a reliable brewery and it was kept superbly too.  "You are paying BY CASH?" she asks astonished like I crawled out from some giant Yorkshire rock. Which I sort of had.  Yes, my first five minutes in here were not too happy.  I wasn't enjoying the chilly blue n grey colour scheme, open door, modern rather thin furniture, and couldn't work out a discernible link between Ian Dury and Burnage.  As often in micropubs (ooops, 'modern beer cafes'), it was the 'strength of folk' who turned the experience on its head.  A nice man called Simon (good name, good name) announced he was moving to South Devon and having a few celebratory drinks, and the modern beer cafe rejoiced as one, wishing him well and offering vague advice.  They smiled at me as they did it, encouraging me to feel 'part of things'.  So perfect time to pull out the GBG and give him his South Devon options!  Well, turns out like me, he's a big fan of the Crown & Sceptre in Torquay so we bonded over that, he showed me a video of the locals and I felt cheerful again.  His 'real' friends arrived so I edged away up the bench and was on my own again.  A nice lady with a stripey jumper and red wine smiled at me sympathetically from the bar, and having missed my train, I went up for a Summer Wine Teleporter (again good, but not the same beer I remember it being a few years back in York's Harkers) and did the ticking.


Manchester seems a long way to come just for the sake of one pub / bar, so I cracked on from Piccadilly to one of my other easier remaining ones, a bit out east towards another new place on me, Failsworth.

I hadn't realised it was going out as far as Oldham/Rochdale way, so suspect it might be part of Tandle territory, and therefore, a kind of sneak preview towards Friday night.

It was a big chunky roadside 'family friendly carvery pub', so 'now for something completely different' as someone probably once said.  Some teenagers on bikes sneered as I took the photos. 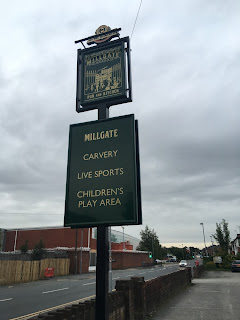 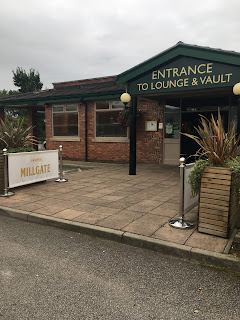 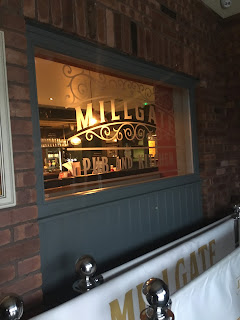 And yes, Millgate, Failsworth (1733 / 2706) was a grand sweeping lounge with a chequered carpet, very few people, an old man on a fruit machine and three JW Lees ales hidden away at the end of the bar, possibly the only comparable feature to Reasons to be Cheerful.  As I ordered an 'Ever Fallen in Love' (I'm a sucker for a punk themed beer), I got a vague whiff of vinegar in the air, and it was taking ages to settle, but I had bigger fish to fry (so to speak) in terms of being desperate for a wee.  Disaster as a sign said the Gents was out of order and I was told to 'use the one in the Vault'.  I went to address this situation with the barman, and a very guilty wide smile spread across his face like he was solely responsible for any blocked toilet situations.  When I asked where the Vault was, he said 'just use the disabled loo next door' and thus I never did find out about this legendary vault, which I spent the whole time imagining as some sort of underground proper boozers bar full of cobwebs, stale smoke, Mudgingtons and 17th century settles with sleeping goats on them.  Instead, I took my ale to a raised area, just out of earshot of a group of women, two of whom were nurses, a twild with a detachable hand like a baby Thing from Addams Family.  Of the ale situation, it was a real 'game of three thirds'.  The first third allaying any fears on my part, tasting like a nice modern pale.  The second third a bit sharper, leading me to think "hmmm, is it supposed to be like this?" and the third third, descending into the vinegar I'd feared.  Where's the M.Taylor sponsored plant pot when you need it?  Perhaps I was just unlucky as ale over East Lancs way usually some of the best.


The misery wasn't quite complete.  It had started raining.  Hull City were being shit.  Trams were delayed due to an incident.  And then a Scouse Twild (the worst type) started being raucous, and attached to every good raucous Scouse Twild is a raucous Scouse Dad who should know better.

Seemed a long journey back to York, but nice to get two more chalked off this seemingly never-ending list!