Halfway through my first of two days in South East London, and with Bexleyheath completed and me 'nicely' checked in to my tiny Travelodge in Sidcup, it was time for a BRAPA first .....

Get on a London bus on my own!  Dun dun dun.  ARRRGHHHH.

The biggest difference I noticed was that although you get on at the front, a second door opens half way down and this is for when you are getting off (I learned this the hard way when I didn't realise why the front door wasn't opening, of course the driver and passengers didn't tell me cos this is London.  How do you thank the driver?  Do you shout down the bus?  Or not saying anything?  And if not, how does he/she get a sense of job satisfaction?  Yes, it was confusing.

So that was an eye opener,  and no longer will I criticise the churlish arrogant pie eating fat bastard in Bolton ever again.  That was the logical conclusion I came to.

Anyway, sorry.  I'm here to talk pubs.  I was in this strange place called Blackfen which got its name when a man with sideburns from the Fens called Jez Melton (Chatteris to be precise) came here to steal a sheep for his own personal use in 1803 and said 'corrr, it's like being in the Fens, only people are blacker!' (I assume he meant their mood).  And that is a BRAPA fact.

My first pub was named after original landlord, George Staples (1706 / 2679) , also back from a time when it were all t'fields around here, this was in fact one of the very first buildings in Blackfen.  I wonder what he'd make of it now...... 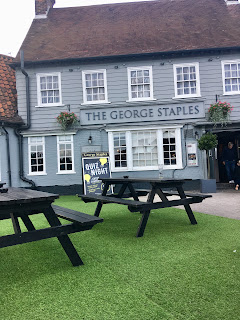 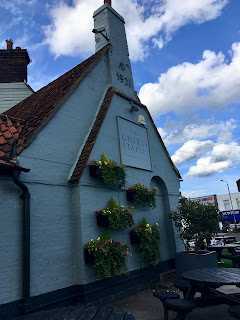 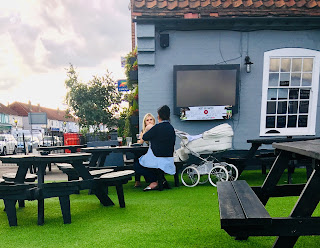 This was about as 'namby pamby London pub' as I encountered in my 12 during my two day trip, inside a cacophony of bright lights, unpubby chairs and tables, screens, prosecco, bookcase wallpaper, buggies, and everything else which makes me grit my teeth in a burning inner rage.  Made Antic pubs look like Derbyshire heritage classics.  Sounds silly to say, but it was like they were actually trying to make it a pleasant, cosy drinking space, but had failed miserably.  Functional if slightly harried staff served me what turned out to be a London Pride that was 'drinking well but slightly cloudy in parts' but I couldn't get out of the building quick enough, even though that meant sitting on an astroturfed 'lawn' amidst traffic fumes at a busy road junction, whilst a ginger twild (always the worst) nicked Daddy's car keys, hurled himself around and said 'look at me Dad!' with a depressing regularity.  A dickhead spaniel started yapping, and then a fierce wind blew across, I certainly wasn't getting much peace here so rang my Mum to complain (even she couldn't assist) so I instead dreamt of late 80's football grounds with plastic pitches.  Yes, this pub was certainly more Roy Wegerle than Ricky Hill, more Frankie Bunn than Roger Palmer.  I can't make it any clearer!


A bit like being on an episode of Knightmare, all I had to do was side step to the right five times, and then walk straight ahead until I came to the door.  Danger team!  That is how easy it was to get to the other Blackfen GBG entry.  Cornwall could learn something from London about 'ease of pub travelling'.  Take that Lanlivery ya tossers! 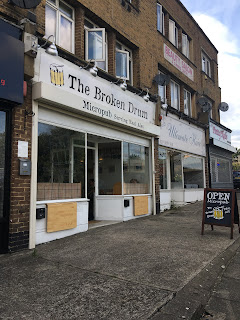 My first, and favourite micropub of the two night stay, the Broken Drum, Blackfen (1707 / 2680) thanks in the main to the smiling, effervescent landlady who greeted me on arrival by screaming "HIIII, RHYS IS IT?"  as I made my way to the bar.  "NOOO, SIMON!" I squealed back.  "SOWREEEE" she squeaked.  "IT IS OKAYYYYY!" I trilled, before ordering a drink to put all the other customers out of their misery and stop the local dogs barking, including that dickhead spaniel in the George Staples garden.  I did ask her, with a confidential note of seriousness now entering my voice, what this 'Rhys' was here for?  "Hahaha, I don't know, just been told to expect him!"  she replied.  Huh, surely she must know whether he's here for a job interview.  Must be a strippergram - the only possible scenario my brain could envisage at that moment!  My ale came in a glass with the Bombardier Bus on it.  I have seen the Bombardier Bus in real life, and it was just as exciting then as it is now.  The beer was called Franc in Stein, and like Duncan Mackay's experience of this ale recently, I found it not at all to my taste (sour, bit cloudy) but pretty sure it was kept well by the pub, just the style of beer.  One thing that did annoy me about Broken Drum was 'rules galore' (signs everywhere, and very specific re mobile phone use unlike I'd seen before, didn't seem in the true spirit of pubbing).  Nevertheless, the place had a homely feel mainly thanks to mine hostess, bit of panic as some old gents ordered "three chicken burgers and curry sauce, lettuce and mayo in all!"  "You getting these delivered HERE?"  "No"  "Hahaha, ok (AKA : 'phew')".  As I went to the loo by the bar, I returned my glass and said cheerio, I had to observe Rhys had never showed.  She probably thought I was him all along, but'd just got cold feet, perhaps fearing other cold extremities.

I took a bus back to 'glorious' Sidcup, my home for the next two days, and here was where I had the problem getting off the bus!

But once that had been negotiated, and I'd walk back on myself 5 minutes, the day's final pub and second micropub was upon me ....... 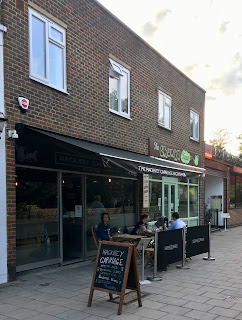 As dull inside as out, I really didn't see the point in the existence of Hackney Carriage, Sidcup (1708 / 2681).  I mean, we can joke about the 'micropub blueprint' as put into place by Martyn Hillier and the limitations of it in comparison to your good ole' fashioned boozer, but when they are good, as we saw in the Broken Drum, it is often down to staff and the interaction with the customer, as much as ale.  Let's face it, you ain't coming to micropubs for the stained glass Bass settle from 1762, the ghostly legends of old, the wood smoke smell and warped beams, roaring real fire, multi roomed mosaic floored interior and worn bench seating are you?  So when you get something like this (and a very similar example in Eltham tomorrow) where there is a glass divide and door which staff retreat behind to get your drinks, and hover behind for the duration, it kills the atmosphere stone dead.  Ok, not so bad as here as in Eltham but it made for an impersonal micro, and an impersonal micro defeats the whole objective, surely.  I may as well have been getting served in McDonalds.

I was saved only, by one of the most upsetting (so obviously amusing) BRAPA experiences of the year, when a perfectly normal seeming gents asked me which table of four I was actually sat at, cos he had three friends joining shortly.  I apologised, for I'd wedged myself between two banks of four, and with his friends running late and him noticing my Good Beer Guide, we got talking local pubs.  Fearing this may be my best chance of 'BRAPA interaction' in SE London, I asked if he'd do the honours and highlight this pub.  He seemed to understand the rules.  But next thing I know, he's not only highlighted the word 'Hackney Carriage', he's got totally excited and done 'One in the Wood' at Petts Wood and 'Door Hinge' at Welling.  "Noooo, I haven't been to them yet!" I cried.  But he calmly replies these are two of his local favourites and it'll be a reminder for me to go to them tomorrow!  But the whole book is a reminder of pubs I need to go to!  He was just about to get started on the Penny Farthing at Crayford (he loved his micros) when I managed to wrestle it off him and put the poor scarred book back in my bag.  Monster! His friends arrived, so I drank up and wandered back to my Travelodge via the local Tesco unable to believe quite what had just occurred.

So I may've moaned on a bit, and I may have only really enjoyed 2 out of 6 pubs on day one, and probably about the same number of pints!  But it is always fun, and the standard was about to sky rocket tomorrow morning so join me in part three for tales of that one.

For now, goodnight, and don't let the tickers bite.