Three pubs left to go in Derbyshire as I arrived with Father BRAPA on the sunny, breezy morning of 3rd August 2019 for the 'grand finale'.  Anticipation was in the air.  But typically of this superb county, it wasn't going to go down without a fight!

It all started gently enough, as a typically friendly Derbys pub man in shades overheard us debating our pub strategy, gave us a pre-emptive or two, and instructed us to catch the bus down to Long Eaton 'proper' to "save yerselves valuable drinking time!" I love the way these blokes think.

Being an 11am opening micropub, we decided to start at York Chambers, Long Eaton (1715 / 2688) even though a big chunk of scaffolding made it hard to find the entrance.

When we did, the amiable landlord joked that he didn't want to be in the photo, and then got chatting with Dad about the hopbines growing outside the pub, because Dad is growing them too for when he launches his BRAP DIPA (D stands for 'Daddy', it is only 12.8%) in his out-building in 2021. 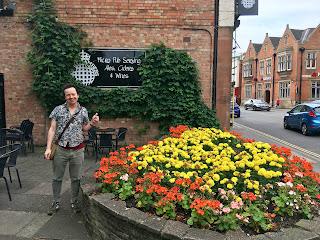 In a scene reminiscent of the other week at Melbourne's Chip & Pin, I walked in to find a local with a greyhound saying "BEAT YOU TO IT!" and they had that Under Pressure Ale on which got me into trouble in Eltham two days previous.  The Stancil ale was probably the best quality pint we had all day, the place had space and character, the guv'nor and local were very easy company, and Dad suggested that we dispense with the 'micro' and just call it a 'pub'.  Dangerous talk!  A really good start, I'd not really been expecting it but an easy contender for pub of the day. 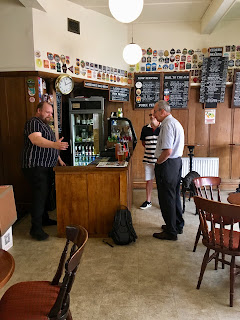 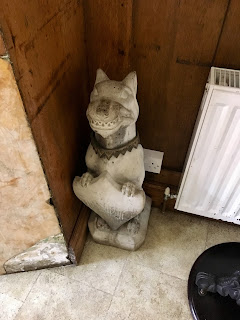 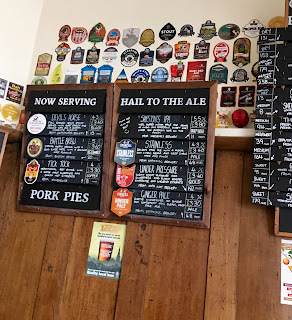 The word on the street was that Long Eaton's other entry, Hole in the Wall, had slipping standards due to the glum owner who'd given up of late due to recent events (wife dead, daughter moved away), and may well not be sticking to the 11am opening time advertised on Whatpub and the GBG.

Shame if true as I saw it sold Draught Bass AND was a GBG regular, and BRAPA has taught me to 'wait and see for yourself'.  But it looked dead as a Dodo (not the micropub in Hanwell) at 11:38am so we decided to get back to Sawley for 12 noon.

Even this didn't go right!  I got us on the wrong bus and a Transgender Pole and a bearded cackling witch (I promise I'm not making this up) helped to put us right!  Told you Derbyshire wasn't coming quietly.


And further relief that a brewery tap for Sawley beers was not some bright shiny metallic heartless bar, but a pretty solid two roomed pub.  A mousy barmaid who was semi-pleasant served us two pints of the local muck, Dad chatted to her whilst I went to the loo, but I didn't really enjoy my ale here.  It had that 'fart in a jar' flavour to it, like some wind had got trapped or something!  And I was so stressed out about how close I was to the Derbyshire finishing line, yet fearing whether the Hole in the Wall would even open at 12, I wasn't really 'living in the moment' for Sawley.  Still, it was a pleasant (if deserted) place to have a pint, and with all these pre-emptives being bandied about by locals and staff alike around these parts, I reckon the forthcoming GBG entries could look very different in this part of the world. 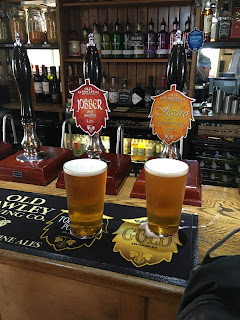 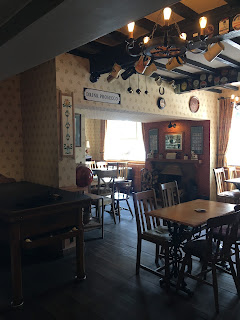 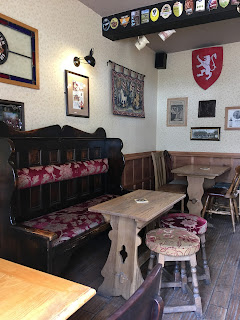 So yet again, we took the bus back down into Long Eaton centre, and WHAT a relief to turn the corner and see the pub door ajar.  Quick, pop the party poppers, blow up the balloons, put up the bunting, bring out yer dead, this was Derbyshire complete ........ 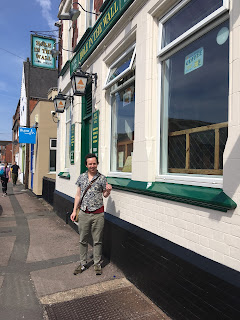 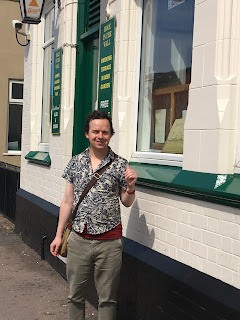 But hang on, Hole in the Wall, Long Eaton (1717 / 2690) was the most un-celebratory pub in the history of BRAPA county completion history.  When I completed Cambs, Woolpack in Stanground had bags of humour, great ale, and closed down about a week after my visit!  So what the fate of this will be?  I'm unsure, but it seems like a pub on its way out to me.  All the rumours we'd heard were spot on, perhaps most upsetting of all was that the Draught Bass was terribly kept, near vinegar by the end.  And I'd have returned it if I'd not been concerned that the landlord would've snapped, grabbed a rifle from behind the bar, and finished us all before turning it on himself.  And I didn't want that, not before Stapleford anyway.  The one other customer was watching the Ashes, and he brightened a bit when we made comments that suggested we 'knew a thing or two about cricket'.  Two dogs slept on the floor, male dogs, their huge bollocks were sticking out, and I whispered to Dad "I'd have taken a photo and put 'this is the dog's bollocks' if it were a good pub!"  And it so nearly is because under the right ownership with the right beer, it is a bona fide Derbys classic with some gorgeous features, old fashioned feel, even a pool table.  Ugh, only in BRAPA could we complete the county drinking the shittest Bass I'd had ever feeling too scared to speak out loud!

So yeh, I think I'll leave my celebrating til we get to Notts.  Time to catch a bus outta Derbys for last time until about 2030.  Hear hazy details of our other three pubs tomorrow night!