BRAPA and ..... The State of Modern Football (Tales from Bury)

Not going to lie, I was still a bit bewildered from the crazy Friday night in Stalybridge & co when I arrived at a rain soaked 'Bury Interchange' ("all your transport solution needs") on the following morning with SIX pubs on the agenda.

I found myself on a bus that straddled Bury & Rochdale, a bit like Rose West on a West Indian gentleman, which dropped me off by a hospital called Fairfield.  I didn't go in, but instead climbed 15-20 minutes into a more rural area, finding myself in woodland by a village church, with 35 minutes to kill until 12 noon pub opening. 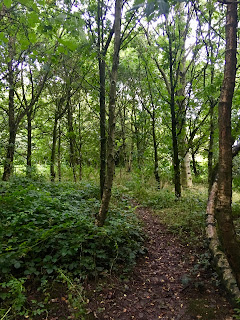 It was the serene sobering 'back to nature' detox you need after a trip to Legendz, though the sign promising a whole host of exciting wildlife was disappointing as I didn't see the merest scurrying of a stoat, hear the slightest pip of a chaffinch, nor did I feel the faintest flutter of a Speckled Wood with the face of Kev Newton brushing my cheek.

From a clearing, I saw a much more pleasing BRAPA sight.  An old dear taking out the pub bins at 11:59am.  Just as well, the rain was coming down heavier by the minute....... 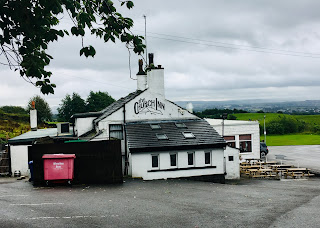 Just as I approached the door of the Church Inn, Birtle (1723 / 2695), the door swung open and a stodgy sort of bloke grunted at my lame 'bad weather' comment.  I smiled at him reassuringly a few times during my visit, and his face spasmed in a way which suggested his facial muscles weren't often exposed to such a course of action.   A local rocked up at 12:01, and was amazed to see I'd got my Phoenix ale before he'd been served (breaking his 50 year record of being served first here?), so retaliated with a double Corona, aggressive lime in each.  By ten past, a huge extended family were in the bar area causing a fuss, apart from moody teenage daughter hanging back as though she wanted to be anywhere else in the world apart from here.  No doubting this is primarily a dining venue, for all the crooked beams and low roof, just a less posh version of the White Hart in Lydgate, and yet, not necessarily better for it. "You ready to order?" asks a barmaid, waving a menu at me from the bar.  "Errm, no, I'm just having a drink".  "OH!"  Jeez, can't you look hungrily at a barmaid anymore without them assuming you want food?  Perhaps the most baffling quote of the entire day came at 12:17 when a quirky granny and her gobshite grandson walked in.  "We're not too late to order food are we?"  Even mine host half smiled at this!  They also had to have 'J2O' described to them.  By 12:25, safely 'checked in' on Twitter', I looked up to see all 4 staff members looking over.  Had they seen my check in?  Was I paranoid?  Were they just looking at the heavy rain in the window behind me?  Whatever, it was time to get going. 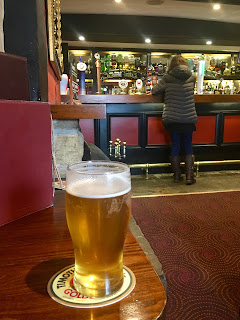 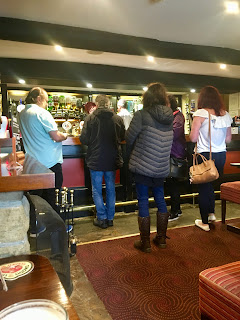 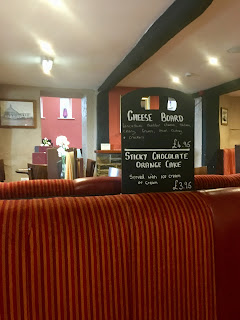 That was, perhaps, the perfect example of me enjoying the planning and getting to a pub rather than the act of actually being there!

A bus didn't take long to dispatch me back in Bury, where my one remaining central tick, loomed large, as Wetherspoons so often do ....... 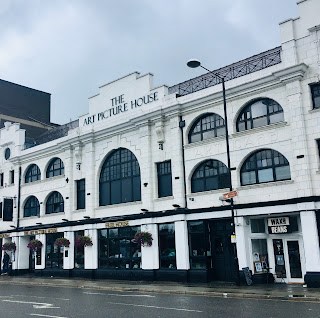 Bury 'Spoons do well for me, and Art Picture House (1724 / 2696) was a splendid building out and in.  Pleasing to see, as not all of these former cinemas and theatres come up to scratch, anyone who has been to the Ritz in Lincoln can tell you that.  In the other Bury 'Spoons, Robert Peel, a couple of years back, I had a pint of Brightside Odin which was perhaps the best kept pint I have ever had in a Wetherspoons.  I ordered the same today, and whilst it didn't quite reach those heights, it was good enough.  The young barmaids were chirpy and diligent, buzzing around the island bar, understanding the need to 'let it settle and top it up', which sounds like it should go without saying, but doesn't always in 'Spoons.  I wandered around admiring the beautiful old theatre stalls and balcony after that, reminded me a bit of being in the Empress Ballroom in Blackpool's Winter Gardens during a boring punk band, and deciding just to admire the room instead!  At the loo, someone had inexplicable sprayed foamy soap (I hope that is what it was!) all over the mirrors, and I was just about to get an 'amusing' photo when a sighing staff member spoilt my fun by cleaning it up post-haste.   Still, just like the Coronet in Holloway or Liverpool Street's Hamilton Hall, you had to keep looking upwards, as everything at ground level was reassuringly 'Spoons Grot, even the one man who moved seats when he saw me arrive (MY REPUTATION?) and the strange wedding party in vintage dresses and crazy coloured waistcoats.  At least a deaf punk said thanks for holding a door open.  Imaging myself and the nearby drinkers as subjects of some 19th century theatre performance, I soon get restless and felt the need to move on. 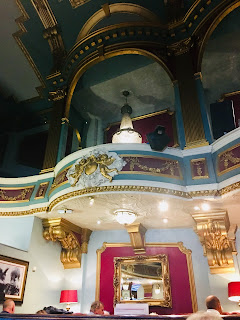 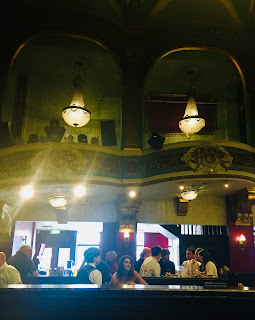 A short bus ride took me to the Bury suburb of Woolfold, for my final 'tick' listed under Bury. 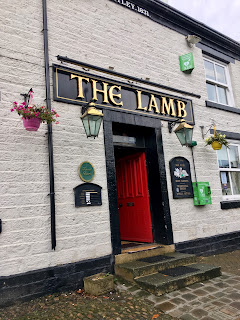 The Lamb, Woolfold, Bury (1725 / 2697) was the basic traditional boozer that I come to this part of the world for, and let's face it, the day had been crying out for such a pub.  I walked into a darkened room with a marine green carpet to strangulated cries of horror as VAR seemed to be dominating their beloved Manchester City's opening Premier League game against poor West Ham.  There were just two ales on (which I like), Doom Bar (hmmm) or this Black Sheep clip with a 'Pale Ale' sticker over it.  I went for this and wow, incredible stuff.  If it was a Black Sheep, best I've ever had, but it could've been anything.  Here wasn't a pub to ask anyway, the barmaid who looked about 12 kept crouching on the floor behind the bar.  She was either a secret ninja, or trying a bit of yoga.  I stood with the bar blokes, deciding 'getting into the farcical football spirit of things' was the way to enjoy this pub.  It was.  Everyone was bonding over the crazy decisions.  Of course, part of me wanted to grab my GBG, plonk it in the middle of the floor, stand on it like a soapbox, and declare "LISTEN TO YOUR PLASTIC SELVES!  NO WONDER CLUBS LIKE BURY & BOLTON ARE DYING WHEN THERE ARE LOCALS LIKE YOU SUPPORTING MAN CITY!  COME ON THE HAMMERS" but I'm quite confident I'd not be safe back in York writing this blog if I'd done that, but I'd like to think at least Mr Protz would've paid tribute to me in a dark corner of What's Brewing.  On the way to the loo, two lads tried 'bantz', suggesting my punk top and combat three quarter length shorts looked like I'd just got out of bed, but they were wearing trackie bottoms and dirty vests!   Still, it was quite a classic experience, and I figured 'Sterling is in my Fantasy Team' so not all was lost.  The final whistle blew, everyone breathed a sigh of relief, a bloke told me it was going to be a long season.  I nodded and scurried to the door. 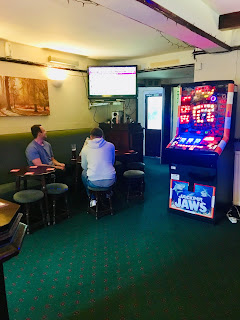 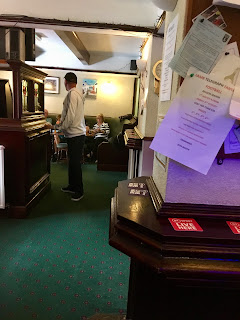 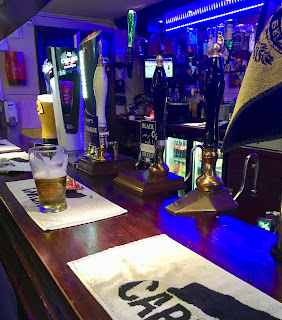 Three done, three to go.  I'll tell you about them on Sunday if you behave yourselves.