BRAPA and ...... the Buzzy Bees of Brentford (Twickenham / St Margarets)

Back in the early 19th century, there was this town west of London called Wickenham.  Not much happened.  Men drank bitter.  People kicked around a pig's bladder.

But then one day, a man picked up the bladder and ran with it!  Then his wife ordered a prosecco.  Then she gave birth to twin twilds, Toby and Jocasta.  The man grew a beard, took his socks off, tanned his ankles and wore skinny jeans.  And the little family all went to a gastro pub and ordered whitebait.  Their friends all copied them.

The local councillors of Wickenham were left with no option upon realising everyone in their town was now a twat.   They added a 'T' to the front of the word.  And Twickenham was founded.  You might not find this factual tale in the history books, or on Twikipedia.  But rest assured, it is a 100% BRAPA fact.

And that set the scene for Saturday 17th August, my first chance to see my 'beloved' Hull City this season and the excitement was palpable.  Well, half palpable.  Call it 'palp'.  I was joined by O.G. squad Bernard 'Daddy BRAPA' Everitt, Thomas 'Tom' Irvin and Benjamin 'Ben' Andrew.

We started not in Twickenham, but in neighbouring St Margarets which I'm going to describe as 'far superior', but only because the barmaid from the first pub might be reading.

"Look at St Margarets tryin' to be all posh" I sneered, as we walked down the high street, passing dog boutiques, estate agents with gold retinas and cafes serving fry-ups which appeared absolutely grease free.  "Yeah, and I think it is succeeding" replied Ben.   Bury seemed a distant memory.  But then again, it often does.

We were at the pub about ten minutes before 11am opening.  It was managing to do a very good job of looking very 'not ready' despite having two open doors. 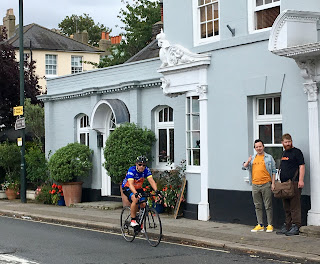 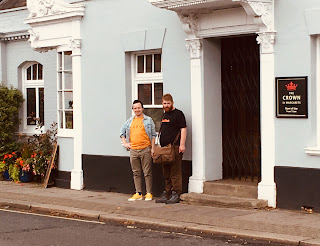 I was a bit suspicious on first glance, Crown, St Margarets (1729 / 2702)  looked more like a town house than a pub, and the crown on the pub sign made me think I was ordering some bank documents from archives whilst having a carvery.  A strange sense, I'm sure you'll agree.  Tom strode up and down the street swigging a huge carton of tomato juice.  "Do I get a bonus point for this?" he asked hopefully.  "No" barked Dad, breaking the painful truth to Grimsby's favourite blackcurrant drinker.  Finally, the door grills slid to one side and we were in, and bugger me it were proper posh.  Quality, but posh!  If you were an alien and given some time and space altering drugs (pretend you are in Stalybridge) and plonked in a pub in any area of the UK, you would immediately cry "WEST LONDON".  What made the pub was our barmaid.  She told me off for ordering Oakham Citra ahead of this award winning Shere Drop from Surrey Hills.  Considering I'd gone a week without ale, I thought I'd devour the Citra, but it was like my tastebuds had forgotten how to enjoy beer!  A comment from Ben led to me explaining the pub ticking concept, and as a feisty lady who likes ticking stuff off a list, she said that this was a hobby/lifestyle that she could totally get into.  Even when I explained the pitfalls of cross-ticking, travelling, blogging and photos, she seemed enthusiastic.  "This is my 1729th pub!" I told her.  "You could say any number and I'd be none the wiser" she replied honestly.  Fair enough.  Even when we sat down, she was over asking how our beer was and volunteering to take a photo.  What a gem, she made what could've been a 'slightly twee but pretty West London pub into a very good one.

We decided it made sense to walk into (T)Wickenham rather than walk back to the railway station, as it'd be just as quick.

Our next pub reminded me of last season's Brentford trip, when we did the beautiful Dove at Hammersmith.  Thames-side, the outdoor seating all on the opposite side of the road to the pub itself, the bogs in an underground dungeon, the pub a bit higher up some steps.  Quirky. 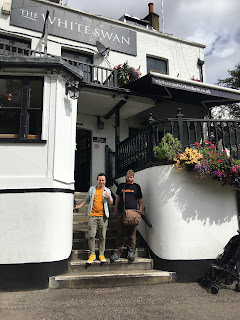 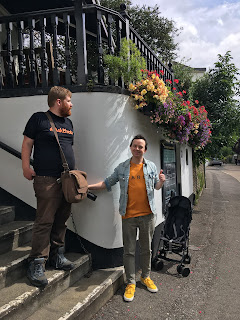 More fantastic female staff greeted us at White Swan, Twickenham (1730 / 2703), especially this redoubtable Scottish lady, can't remember what she was talking about, but it wasn't offal, Irn-Bru and heroin from memory.  We took our ales across the road, noting all of the "beware of oncoming traffic and pedestrians and cyclist" signs, where I noted the pub wasn't very optimistic weather wise as despite the bright sunshine, all the umbrellas were open.  Kids were learning to row on the river, so as in the Dove, Tom heckled them from afar for no apparent reason.  A Red Admiral perched itself on the Swan on the pub sign, and stayed there for ages - that probably was my highlight, as it wasn't too long before the place filled up with Toby and Jocasta's ordering Whitebait.  The smell of fish and lemon with a hint of pea puree hung in the air, and Twildlife was 'instructed' to sit down amidst some pretty half-arsed parenting it must be said.  My ale was a 3.5% local thing, pretty bland but I joined Dad in a Naked Ladies round so to speak, and that was an improvement, and the fact we stayed for another suggests early doors, we found it quite pleasant out here.  I got lost on the way to the loos, a barmaid directed me to this special singular pub tickers VIP toilet with washing machine and tumble dryer and lots of space.  Had she heard about Newark?  Whatever, it was time to move on.

We carried on along the river bank to our third and final 'tick' pre-match, and I remember how fresh and sweet the air seemed and wondering what the life expectancy is here compared with in Yorkshire. 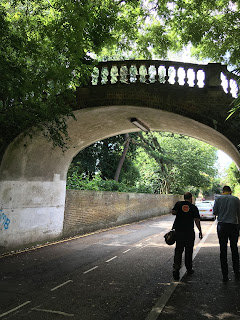 The fact our next pub was a Wetherpoons made no discernible difference to the inhabitants of the once Wickenham, as at the crucial photo moment, a bloke with no socks and a disobedient twog decided to bend down .......... 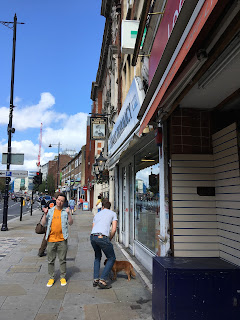 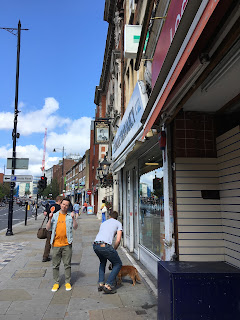 So here we were, rugby's own William Webb Ellis, Twickenham (1731 / 2704) or the WWE as probably nobody on the planet apart from me calls it.  Wrestle-mania!  An early 'Rascal' Shopmobility scooter sighting was encouraging, even though it looked like it needed a good clean.  It probably belonged to Mr Barnsley, an old man with flat cap and squashy face who recognised our Hull City shirts and was pleased to see fellow northern comrades though shouting across the room to him proved tricky.  Instead, Dad told us how when we moved to Barnsley in 1983, the first newspaper headline he saw was "Man Beats World Record for Ferret Down Trousers" and swears this is the truth, and I for one believe him.  Classic Barnsley.  I didn't really get on with my Binghams ale, good quality but weird flavour, nothing like the 'Viennese Whirl' biscuits I used to get as a twild!  And the time honoured Hull City quiz plus bonus 'quandry' posed by Ben helped to while away that precious 'Spoons half hour before the train to Brentford. 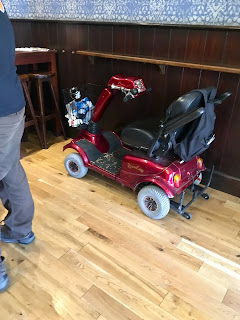 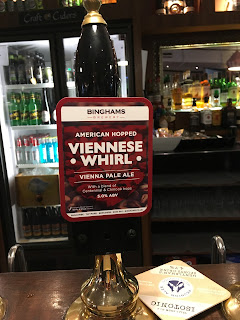 After a big bottle of juice to keep my kidneys ticking over, we had made better time than we'd expected and Ben had his own pub mission ......

Brentford, as you might know, was once famous for having a pub on each corner of their ground.   In 1999, I did three of them with Dad as a strapling 20 year old.  I think one was called Queen Elizabeth, but can't remember the other names.

And I think it is down to three pubs now, we were on a mission to get to the Griffin but I get easily distracted by Aussie Soap humour ...... 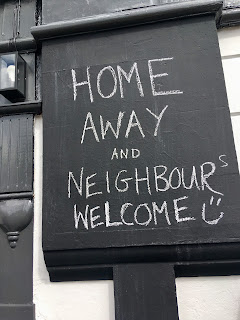 So I took this photo whilst telling a Hull City supporting woman with more emotion in my voice than was really necessary that I still actually LOVE Neighbours.  (Home & Away can do one, Sam Frost or not!)

This was outside 'The Brook' pub.  But when I turned around, Tom, Dad and Ben had vanished so I thought they'd stuck to the original plan and gone to The Griffin which looked a cracker .... 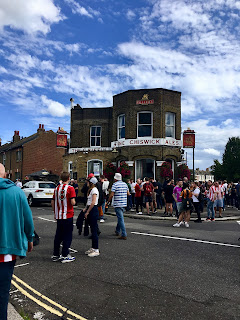 I got served so efficiently, pint of Oliver's Island in plastic, that I had no choice to crack on but I couldn't find the lads, then Dad texts to say they are in the Brook and he has a Plum Porter for me on the table.  Noooooo!  So I downed my pint of OI (in about 4 mins, good for me that!) and ran back up to the Brook ...... 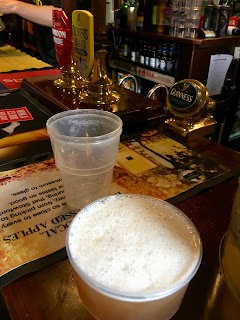 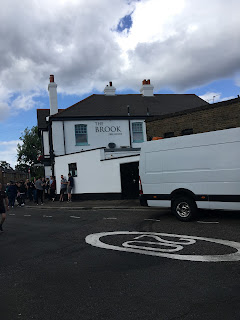 .... by which time Ben had started my Plum Porter, but not to worry, I'd found them and was a decent pub, not too busy either by now.

The game was good, 1-1 draw was fair, shame we conceded the lead though, and always nice to stand on a terrace.  "Oooohhh, last year at Griffin Park on the terracing!" warned the locals, for about the 14th season on the trot.

Post match, we felt it was risky to get a pub in around Clapham Junction if we were on the 7pm.  I suggested an old classic I'd not done in the City, so had planned for Cheshire Cheese on Fleet Street, but to mine and Ben and Dad's astonishment, Tom (usually the master of quick train manoeuvres and risk) suggested even this might be a bit of a stretch!

So Parcel Yard in King's Cross it was, one of my most visited pubs in the past 10 years, but not for quite some time!  Pint of Dark Star was amazing (best today!), even if American parents let their kids wipe their asses all over the tables.  And then Tom revealed HE was on the 6:30pm train out of 'The Cross' and quickly buzzed off.  And suddenly all the caution made sense! 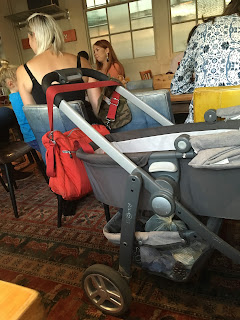 Had been a real cracker of a day anyway, and the lower back pains which had blighted me since the previous Sunday finally vanished, and remained vanished into Sunday and Monday.  Did it really just need a good pub session?  Does my body only understand being in a beery state?  And UP TO DATE on my blogs too, by Monday night.  What the 'ell is going on?