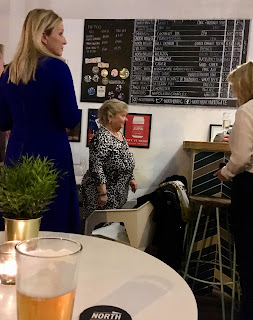 The transfer window slams shut on another cold and lengthy January, never the most productive or pleasant month for BRAPA and in truth I'm welcoming Feb with open arms!

As so often happens on 31st Jan, that rumour mill is churning right up until midnight.  Oscar's Bar in Morley looked a done deal but failed a late medical when a girl from Hebburn made a guy from Rotherham put up some blinds instead so he couldn't join me and the whole thing got cancelled.  I wish I was making this shit up, but I'm not.

And earlier this week, BRAPA was stood up discussing Bradford's amazing 4-3 win v Shrewsbury at work with a Bantam.  Well, the Si Sports News reporters assumed that meant I was off to Thackley that same night, but it was more a red herring than a Black Rat.

The fax machine then broke at the Yorkshire Ales in Snaith.  It's in East Yorkshire, NOT North Yorkshire.  Idiots.  So scrap my earlier claims that I'd finished E.Y.

Our most welcoming signing with the 1975 Good Beer Guide, pictured here: 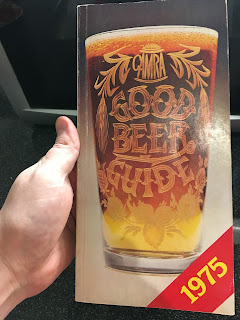 I'd like to say a big thanks to 'agent' John Clarke (the Eric Hall of his day but less Monster Monster) for facilitating this move and thus, completing my collection.  Great quality too, despite some 'binding' concerns which I'm sure was the reason the 2019 was delayed back in Aug/Sept, not saying CAMRA haven't learnt from 44 years of mistakes but you know.

Speaking of 'agents', others who have helped facilitate BRAPA this month should be congratulated.  Martin Taylor of Waterbeach F.C., Megan Lockey of Crofton Utd, Bernard Everitt of Naburn Minstrels, Neil Harris of Birmingham Pint Shoppers and Ian Sutton of Outer Blackburn Raiders have all played their parts and deserve honouring.

Ever noticed that pub artwork is getting weirder as they try to 'offer something different' and 'stand out from the crowd'?   York's second newest outlet, the House of the Trembling Madness Craft Beer Mansion on Lendal certainly had a good go at it ..... 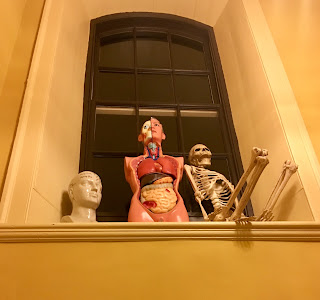 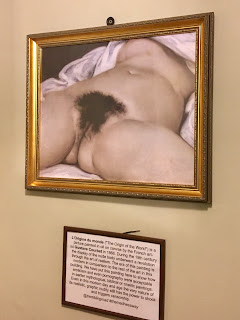 But here comes the real science bit...... 26 new pubs, quite a modest total by recent standards but one better than last January and just below the 28.4 average, though how you visit 0.4 of a pub I'm not sure, but I suggest you try some of Altrincham's newer offerings as a guide.   More positive were 3 decent pre-emptives which I'm sure can all make the 2020 or future edition of the Good Beer Guide - these being Dog Inn at Whalley, Pint Shop in Birmingham and the Darton Tap in well, Darton of course.  Terrible pictures of this one at the bottom of this blog.

So which pubs have I enjoyed the most and which have not been such a success?  Or, if I'm to labour this transfer window comparison, who are the Salah pubs and who are the Sala pubs?  Too soon?  Probably.  Cyrille Regis was.

Honorary mentions go to the staff at the Rising Sun in Leverington, my recent Saturday trip to Blackburn and surrounding area, and Swan with Two Necks in Pendleton for great beer, location and staff.

So I have a bit of work to do to get back on track with my quotas, 28 days in Feb, so let us say 33 pubs is the minimum I'm looking for, but confident I can achieve it.  And this is because, coming soon, the 2019 BRAPA Winter Festival...... 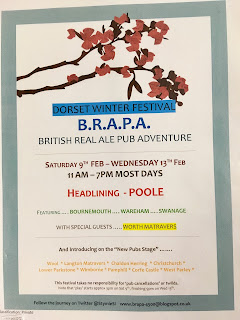 So yes, I'll be back in Dorset but east this time after my fantastic adventure to the west of this wonderful county in October.  5 or 6 pubs a day for 5 days, that's gotta be the aim hasn't it?

Before that though, I'm looking to get Thackley done on the 1st before a great landmark as I aim to finish Cambridgeshire on the 2nd plus a bit of cheeky North London 'Spoons action later on.

There may well be ticks to had on Mon 4th as I'm up in Glasgow for work.  Paisley?  Crossing the Rubicon?  Coatbridge?  Who knows.

The latter part of the month is more mysterious.  Sat 16th should see something but how will my liver have recovered from Dorset?  If the answer is 'very well', could it be time to start Derbyshire properly.  If I was Bob Holness (I'm sadly not), then A is flashing, and the question is which town is famous for its Royal Shrovetide Football Match?  In fact, an 11th hour update informs me Millwall's FA Cup run means Hull City have no home game that day, so Father BRAPA is offering chauffeuring services.  Is East Lancs flashing now?  I think it is!

I'm looking to finish West Yorkshire later in the month with that Morley tick that just won't fall.   And the month ends with a trip to good ole' Brentford where there's plenty o' West London options to go at without being too silly.  By which I mean, without Tom being too silly.

Numbers wise, I have a huge landmark coming up in Feb.  The 1,500 mark.  This will signify one third of the GBG complete for the first time, which I predict will happen towards the end of my Dorset holiday.

Then, the aim is to put enough distance behind it that when we get to cross-ticking in late Aug / early Sept, I don't fall back below it.  But this could be a tall order bearing in mind I'm likely to lose 200 pubs based on current projections.  Pub ticking, I don't recommend it!

Our long time BRAPA friend Christine Andrew dug a great old pub photo of the archives to prove I did go to pubs before 5th April 2014.

This shows me and Father BRAPA on 28th Jan 2009 pubbing in London before an evening kick off defeat at West Ham.  I'm pretty sure the pub was the Elephant on Fenchurch Street (though could've been one called Wine Lodge nearby) and yes, we did use the 2009 GBG to find it: 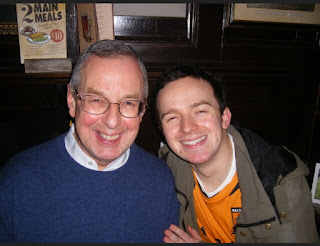 In worse pictures, remember I had to take a disposable camera to Darton & Mapplewell last Friday.  Well, I got the pics developed today.  At huge expense.  All I can say is 'oh dear oh dear oh dear':

So there you go.  Was it all worth it?  Comment below!