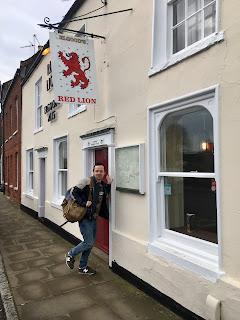 Okay, so not too sure about my pose for this one, but after a delightful experience in Leverington, a quirky stance in Wisbech probably reflected my mood as I prepared to push that mysterious red door and enter pub three of the day, along with Martin "RM" Taylor, in my quest to crack North Cambridgeshire for a final time (well, until about 2035 anyway!)

The bar area was awash with peculiar old men blocking and making strange fenland remarks.  The poshest one reminded me of Bunny from Harry & Paul, not saying he was a 'frightful quair' but he had ears of a length that only 100 year old men from Cambs could have, plus a spectacular tweedy waistcoat thing.  He turned in amused fashion as me and Martin tried to squint through the crowd at the bar.  This, my second Elgood pub out of two, probably the only two I've ever been to in the GBG.  Martin says it is rare for their pubs to get in the GBG.  Back in 2001, a bottle of Black Dog was one of the first ales I ever tried.  "I might go for that Mortal Wombat guest ale" I says to Martin.  "Arrr, you should, they're all raving about it" says Bunny, indicating the other blokes at the bar.  "Where are you from?" he asks.  "Yorkshire" I reply.  "Ho ho ha ha he he" he says "WELL YOU MUST TRY IT THEN!"  I didn't follow the logic but I laughed anyway.  The pub opened up into something a bit more dining-led, but was still very much a homely pub for the most part.  My Mortal Wombat was limp and lifeless, not good condition, drinkable but poorest of the day.  Martin sent me the wrong way to the loo.  I collided with a waitress, she put me right.  Martin was laughing, she was laughing.  Everytime she walked past me after that, she laughed.  I felt it was cruel.  In the actual loo not recovered from that, I shout "YOU BASTARD!" in relation to Martin's trick.  Little did I know, a quiet man in a gilet with glasses was lurking at the sink.  He looked terrified and scurried back to his Checkatrade wife.   I felt awful.  This wasn't a bad pub, red and warm, but it wasn't kind to me.

Time to get out of that funny north east pocket of the county and wind our way back along the A605 to this strange little 'blink and you'll miss it' place called Coates.  Here's my BRAPA map at the start of play in case you are interested ......


'Blink and you'll miss it' could also be applied to our next pub ..... there was a sort of sign on the road by a gravelly car park, but where was the actual pub?

You know the drill by now, find the pub sign, find the pub name, stand underneath, get photo taken.  No chance.  As me and Martin circumnavigated the building in vain, it became clear the strange little building, a sort of cross between a static holiday caravan, a show home and your auntie's conservatory was indeed the pub.  Locals were now staring out at us, calling the Neighbourhood Watch, so we thought we'd best go in.  "It's had a recent refurb" said Martin, and you could still smell the paint on arrival.  Atmosphere?   You'd have more chance of finding Morrissey and Nick Bruels exchanging recipe ideas on a Come Dine With Me special.  Was our sullen barmaid, a sort of more acceptable Katie Hopkins (with an element of Clare I used to work with) going to speak?  No.  Martin broke the ice.  "The Good Beer Guide says you open at 9am, is that actually true".  No it wasn't.  Where had the local TWAMRA got that bullshittery from?  No one knew.  A mystery.  I sat down with my Old Charlie.  That's a beer.  It was better than Mortal Wombat.  Martin, hardcore as ever, jumped on the Rutland Beast.  There were three locals (one a dog, probably), lounging around behind us.  "Would you ever initiate a conversation with them, with them being the only other customers?" asked Martin.  "No I wouldn't!"  Neither would he.  We sat and supped, I kept thinking someone was going to try and sell me a washing machine or a new PC.  I reached into my bag for my GBG and highlighter.  "DON'T DO IT!"  shouted Martin.  "What?" I replied, shocked by his sudden outburst.  Seems he thought I was about to pull out a gun.  Looking back, it's kind of understandable. 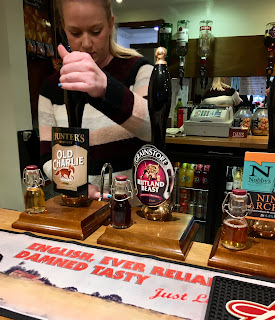 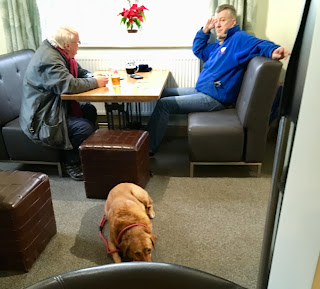 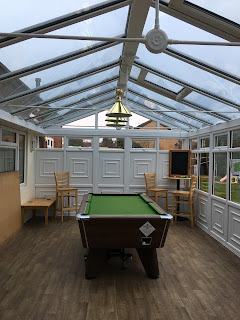 Oh well, onwards and upwards.  But when I say upwards, I mean in a geographical sense downwards, as Martin told me this next pub was the 'lowest' (below sea level?) in the entire Good Beer Guide, now that the Holme and other Ramsey entry have been taken out.

In the north, we tongue-in-cheek say that seeing a shopmobility scooter outside a pub is a sign of quality.  In the same respect, our southern counterparts favour a skip. 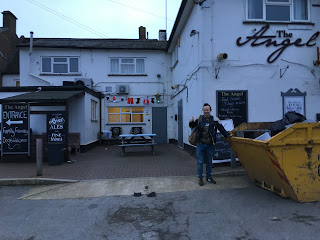 An even better sign perhaps, was outdoor pub bench seating, an epic statement of intent ..... 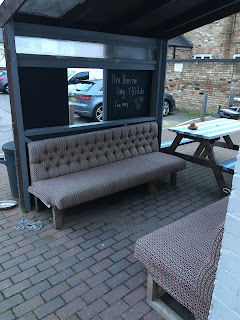 And walking up the corridor into the pub, inflatable off-season Santa was sort of terrifying ...... 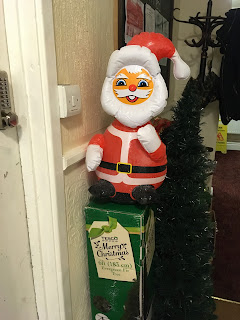 Yes, it is always when you least expect it that the classics creep up on you.  Not so much like a pub from another time, but more like a pub from another world.  And to think Martin almost didn't join me, he'd been in here recently but don't think he'd found the magic that we encountered today.  How to do it justice or compare it to something else?  Halcyon Quest in Prestatyn was Martin's best guess, I felt it had something of a Ploughman at Werrington vibe about it, almost WMC, but better.  It had keg Bass for heaven's sake!  You certainly couldn't remain inconspicuous, you'd have better chance in a tiny Micro in GMR.  The beer was perfect quality, old etched windows, a lady called Jo who'd just downed 4 pints of Goose Island before we could blink was understandably very sociable.  Her partner Steve was having a bitter Pool tournament with the landlord.  1-1 with the decider to come.  I was enthralled.  Jo asked if me and Martin were together.  Hahaha.  "HELL NO!" we replied.  "Oooh, hope you ain't offended" says Jo.  'Nahhh course not' we said, lying through our teeth.  I've probably forgotten other details of this gem (the 5th pub of the day is always the hardest place to go and get a result).


One pub left then, as we wound our way west along dark country lanes towards the village of Glatton, south of Peterborough, for our final tick, and my FOURTH last in Cambs in this current GBG.

It took some finding, surely on the main road, and if not, you'd expect some kind of sign to turn off into the village, so we had to stop and regroup.  Am sure Megan would've found it first time!  Only kidding (I told her today at work she had to accept she'd not won the chauffeur challenge but if she can get me round Devon, West Wales and Orkney by the end of the year, I'll revise my verdict).

So yeh, I was aware it was dark but this was the kind of 'non light pollution' blackness that the weirdo Welsh bloke Dylan Thomas used to harp on about.  Still, we got there eventually!

Having said that, it wasn't so much 'Under Milk Wood' as 'Over Soy Forest' as we entered to a rather spacious pub, mainly kitted out for dining (but very much a pub pub!), not a soul in sight, bit Mary Celeste in a way.  The barmaid was excellent (she almost got to highlight the GBG entry but just disappeared for too long, I'm sure she'll have sleepless nights if she knew that) so I asked her "are you tellin' me that this is will all be full of diners tonight?" and she said yes, we'd timed our visit perfectly and this was the 'calm before the storm' and her fave time too.  As I supped my pint of Fool's Nook by Digfield (I liked the colours on the pump clip ok?) , Martin had spied a fish tank right behind us (always a sign of a good pub in my experience) and saw a fish that looked like Nemo and was cooing over it like some Disney princess, but I'm only jealous cos it swam up to the glass for him but swam away from me!   I was more distracted by a weird wooden twog, which had his own bowl and bones, which looked more like bones of missing schoolkids if I'm brutally honest with you.  Nice pub all in all, though give it an hour or two and the review may've been less favourable. 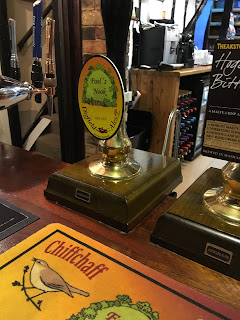 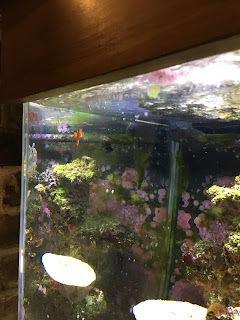 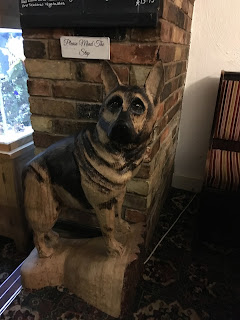 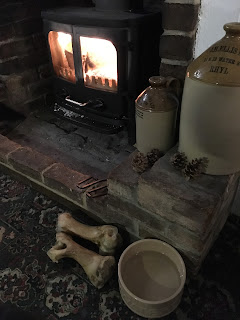 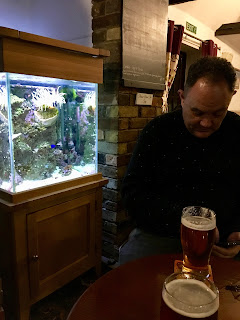 Back in Peterborough, we popped around the corner to the excellent 'Spoons Drapers Arms where Martin got his 58th coffee of the day and I got a half of summat Plymouth based (not gin), here we are: 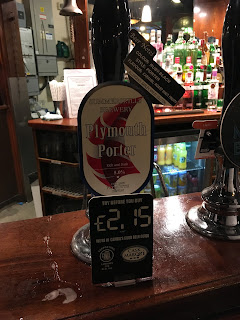 He gave me a couple of Peterborough pre-emptives which I promptly forgot as we said farewell, so I thought it sensible to get back to the station, find a cafe, and have a nice coffee to sober me up.

But nothing was open, no seats in the waiting room, it was still freezing, still a while til the train, so I went off to my other 'go to' Peterborough pub the Brewery Tap.  A nice bottle of Smirnoff Ice would be a good change of pace wouldn't it? 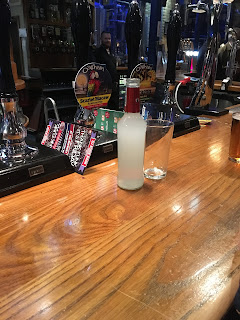 Don't be silly, I went for a Scarlet Macaw and it wasn't too crazy in here this evening compared with my last two or three visits: 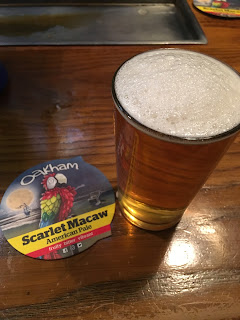 Back on the train, it'd been such a hectic day, I'd barely been aware of yet another Hull City amazing win against the most awful club with the best nickname ..... 3-0 v Sheff Wed and I can't believe this run of form.  Dad rang me and said it was so amazing, we should def go to Aston Villa next week after all,  so I hazily said 'good idea' and revised the BRAPA implications of such a move.


So that was all brilliant then.  Thanks so much to RM, and to Megan for Friday.  Had a few chauffeur offers recently around different places so might have to make it a full blown FA Cup style competition at this rate!  It's a bit of a crazy week, hardly time to breathe, so hoping by Fri/Sat I'll be back on course for BRAPA fun.