The Northern Rail strikes have never been kinder to me from a pub perspective.  Father Bernard BRAPA Everitt thought we should go to watch Hull City's away fixture at Blackburn Rovers (after our recent form, what could possibly go wrong?), he'd have to drive but it was his Birthday weekend, his decision, so was MORE than happy to agree to the plan.

Thing is, when you go by train, you are plonked in the middle of Blackburn, with barely a GBG pub within a mile of you, making pre-match pubbing difficult, or impossible.  Today, I could capitalise.  Not only that, Blackburn CAMRA (not TWAMRA) legend Ian Sutton had even offered to drive us around himself, giving us the benefit of his experience of the best local pubs, but as it turned out, he couldn't meet which was saddest for him really cos Mother BRAPA (now owner of a new Magi-Mix) had made the best Dad Birthday cake ever (not lumpy) and we'd packed him up with a slice.

I met the Birthday boy at York's Designer Outlet at 8:45am on the dot.  He was 72 on Sunday, and the good news kept coming, I'd received a telegram from Phil Windsor saying Dad had 25 years at least driving left in him.  Cheers Phil!  A BRAPA bonus.  By 2044 , I'll have a self driving car anyway which can also fly and turn invisible so I can finally get to Stockport without being seen!

We powered up "Slow-Joe" (the worst SatNav in the world) not because we don't know where the M62 is but because we like to laugh at his crazy ways.  Today, he decided to send us via Wetherby, Harrogate and up through Nidderdale.  So we patronised him.

We arrived in the tiny hamlet of Great Mitton (which didn't show up on a map even when I zoomed in) at exactly 10:30am, the time that the pub opened.  Can I just say at this stage how glad I was to be reunited with my 'smart' phone.  I disposed of the disposable camera as quickly as I could.

The peaceful rural setting was accentuated by two roaring fires at either end of the pub.  A grand hall like building, leather armchairs, rugs, quirky old prints on the walls, random piles of logs trying to do something?  Hmmm, my BRAPPY senses were tingling - and then I spied Brunning & Price bitter and all became clear.  Pleased for Dad really, being in a stronger example of the chain I mean, his one previous B&P was the Physician in Edgbaston which I'd rank on the B&P scale of their tied houses as "utter shite".  This was "very pleasant".  We were under no illusions that if we were here 2 hours later at peak lunchtime, it might be a different story.  Alas, in this pub-ticking game, you can only take pubs at face value (we'd taste the other side of the same ale-flavoured coin later on today).  A friendly Scotsman pulled us two pints of some IPA from t'other side of the t'hills and it came with a warning "it's supposed to be cloudy in case you were wondering cos a few people have asked!"  Well, that shows how useless those jam jars are cos all those 10 day old samples are cloudy whatever you order.  And B&P just LOVE their jam jars more than any other chain (apart from Ember obvs).  But beer eh?  It's a mugs game innit?  We settled into armchairs, Dad refused to use his catchphrase "I could settle here for the rest of the day!" but it was warm, relaxing, and a positive opener.

South of Great Mitton but North of Blackburn was this funny little place called Whalley.

It had a great local feel to it, the people walked around with a look on their faces of "isn't it great to be alive?"  This is slightly different from nearby Langho, where the stock expression is "How am I still alive?", Wilpshire's "I'm alive but I wish YOU weren't" or Blackburn itself "Please can someone end it all now?"

The good Ian Sutton had suggested a pre-emptive 11am opener, and after such a good start in G.Mitton, why the hell not? 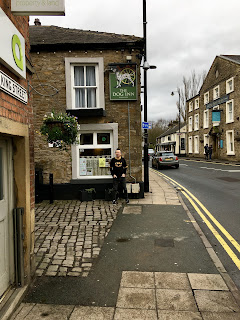 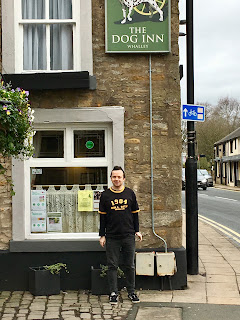 Kind of great that the first thing you saw on entering a pub called the Dog was a dog slumbering on the floor.  It had the expression of Danny Graham during his loan spell at Hull City, with an element of contorted Chris Martin, and wasn't moving for anybody.  His owner, a gnarly local character in what was a rather splendid traditional Lancs boozer with more cracking (below 4% abv) ale, seemed, rather controversially in these parts, to be a Burnley fan.  We were just safely away from the bar into a pleasant side room with a wonderfully tiled fireplace when the poor bloke gets surprised by a huge group of excitable Manchester City fans.  "Waheyyyy, all set for ya cup final today!" they tease him with those lovely Lancashire vowel movements (which reminded me, I needed a bowel movement until I went to the loo and realised how chilly they were, really should've gone in B&P).  Soon, they are putting Northern Soul on the jukebox and the jokey ringleader does this crazy dance whilst the others  stand in a circle and clap him on.  He even seeps into our room.  No wonder I drank so quick again, still not 12 noon, our Blackburn pub we were planning to go to next doesn't open til 12:30pm, don't fancy fighting my way back to the bar in here, and in probably the moment of the day, me & Dad realise there's a pub I've ALWAYS wanted to go to, hard by public transport, only 3 miles away!  Quick, quick, let's sup up and go!

So a short drive took us to the tranquil little rural community, where the air smelt of glorious manure and farm life, a canal trickled (I think), a goose honked in the distance, and I knew of this pub because it was the first CAMRA Pub of the Year Award after BRAPA started.  All those times staring at my map to see how walkable it was from Clitheroe, and here we were , doing it ad-hoc from Whalley in the car,  You just can't tell what's in store in the world of pub ticking! 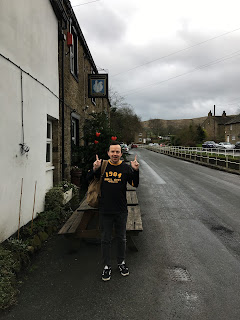 And if the location was superb, so was the welcome as we wandered in and not one, not two, but three ladies behind the bar all jumped to attention to welcome us, pull our pints immediately, and make sure we knew where we could sit.  I have to mention the latter point because the surprising point (to me) was the huge number of reserved tables on the right hand side of the pub, all but the one we were sat at had a 'reserved' sign on, only those closest us were eating, looked like some pretty nice fish n chips.  Dad winced and had to avert his eyes to stop himself ordering some!  So perhaps a surprise to find a CAMRA pub of the year so dining led, but as I mentioned in Great Mitton, that's the other side of the coin as it was now lunchtime, and let's not labour the point cos truth be told, it was a glorious pub.  The left hand area with the bar was amass with local gargling and laughter, quirky barmaids showing off their big stemmed plants - Dad even encouraging me to ask her for a photo which she kind of agreed to!  My Mapplewell nightmare and disposable camera of the previous night felt very much a distant memory.  The gents were outdoors (always a hallmark of a classic pub) and when I peered into the garden, am sure I actually saw a swan with two necks, I bet they breed them specially in a factory in Darwen.  And the beer, oh yes, well on a day of five above average quality pints, this was perhaps the finest.  Not so much lacings, as negligee worn by the classiest Clitheroe temptress (don't say it Russ!)  One of many pub of the day contenders. 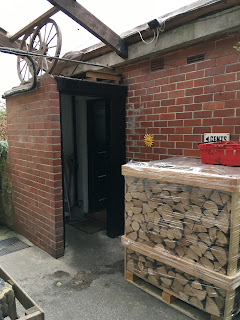 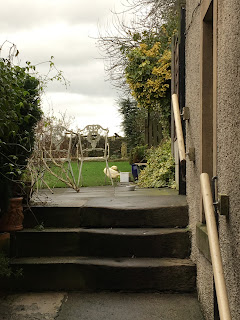 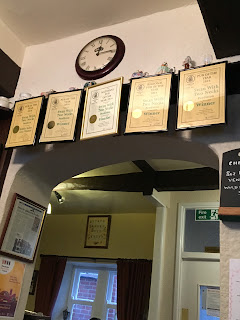 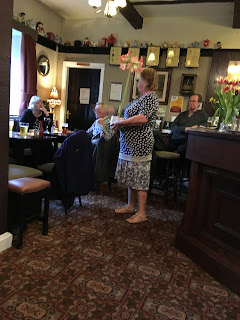 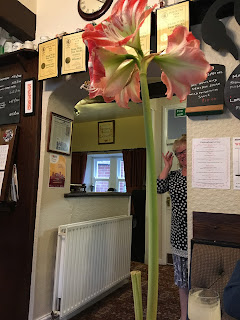 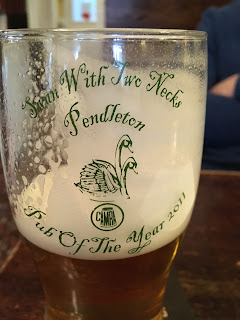 And time was somehow STILL on our side.  Time to get ourselves into Blackburn ...... and I'll tell you all about that, oh and the football (it didn't feel like a football day at this point) in part 2 tomorrow.