I love those pubs which are situated in the most unlikely places.  And by that, I don't mean nestled in a wooded valley, 'twixt trout stream and old grain mill, or stood alone on a barren windswept hillside.

No, I mean those pubs which are hidden amongst rows of houses or on estates.  The type which have probably been there for centuries, harking back to an age when local communities actually used their boozers in that 'vital lifeblood' kinda way which makes today's beery keyboard warriors misty eyed as they grab another can of Punk from the mini cooler.  And so unlikely are these locations to a 21st century audience, they've been able to remain, undisturbed, for those locals in the know to enjoy.

Our next pub (the 4th of our pre-match Blackburn outskirts adventure) had more than a bit of that feel about it, even more thrilling, an old football ground behind the car park belonging to Old Blackburnians AFC.  Do they still exist?  Duncan Mackay has seen them whether they do or not.  They could've beaten Hull City today.

Yes, not enough genuine Estate pubs in the GBG for my liking.  A friendly square barmaid of homely qualities was on hand to pull the ales as Dad gave his bladder one of its final outings as a 71 year old bladder.  The price of £2.40 a pint startled me, even in brilliant Blackburn, so the barmaid proudly told me about a confusing colour coded pump system so you knew how much each ale cost.  It was far too subtle a system for me.  And I must be honest, I didn't expect a great deal of a Moorhouses house beer with a 'Hare' theme but by gum, it was gorgeous.  We walked up to the slightly raised area to enjoy the swathes of bench seating in one of the lighter windowed areas of the pub, most of it was delightfully gloomy!  Derby v Accrington was entertaining a an old bloke on one screen, and just a few feet away, Chesney Hawkes blared out on some 90's pop video channel.  I know plenty of people who wouldn't like this place sadly, but its mixture of Atherton Arms plus Spider's Web in Grimsby with just a little bit more joy and love than both really won the day for me. 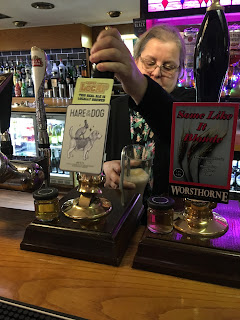 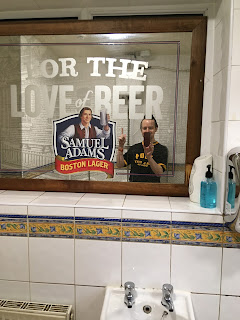 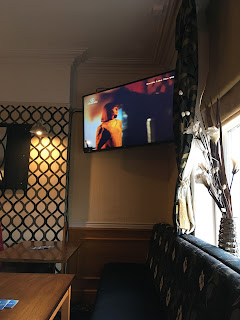 As long as we didn't linger too long in this comfort, we could get my central tick in as well before kick off.  Five pubs, a joint BRAPA pre-match record.

We parked central in this giant car park near the bus station and walked around a corner until it came into view ...... 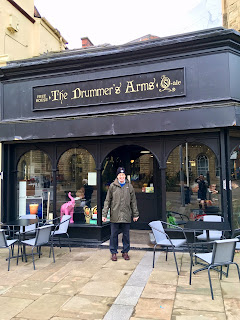 More 'bar' than 'pub' in truth, but the atmosphere, homeliness and amount of old school brewery memorabilia scattered about made me realise that in Blackburn, even bars are about as pubby as they can possibly be, if that makes sense!  It hadn't felt remotely like we were going to a football match today, so a bustling atmosphere full of Rovers fans was a nice way to get ourselves in the mood.  "Wahey!" they kept saying, as though they worshipped Chris Evans 'Don't Forget Your Toothbrush' years, and I suppose the few female folk were probably trying to be Sarah Cawood Girlie Show years.  But there were no Wankers of the Week in here, everyone was great, Dad was accosted up the stairs for some gentle Tiger ribbing, not as painful as it sounds.  Nowhere to sit, but unlike us, we simply didn't care, happy to perch and observe the goings on, kept my drinking speed up I guess.  The Three Witches from Macbeth came in dressed as Bryan May from Queen and soon became bar blockers, but they moved around just enough to make them hard to photograph as you'd expect from these motivated Shakespearean types.  Nice little place, not seen it in GBG before so must be new or hugely improved.

We managed to get a taxi to Ewood Park and I could've even squeezed in a pint of fizz and a pie if the queue hadn't been so long, that's how well we'd done for time!  Sadly, Hull City didn't perform anything like as well as we'd done, barely turned up, and were roundly beaten 3-0 oh dear.  Shame after recent form, no one really complained.  Rain walking back into town towards the car was the worst bit!

But what a fantastic day, am sure these pubs'll stick around the GBG for years to come and it whetted my appetite to get some rural Lancs summer trips done, perhaps in car if Dad agrees, such a rewarding part of the world for pubbing.

I'll be back tomorrow with my month end review, it's not been a bad January all things considered.